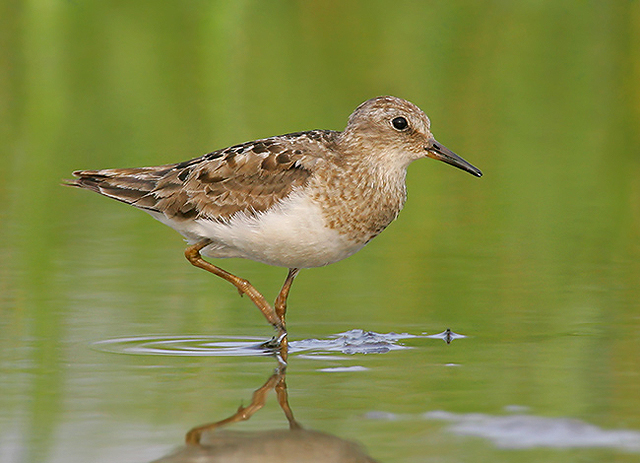 Temminck's Stint: China Markings on the upperparts are variable, some birds are brighter, and better marked, than others. Note the pale legs, on this bird quite yellowish, plus the greyish-brown breast (photo: Juanli Sun).

Temminck's Stints breed mainly in the tundra zone from Scandinavia eastwards to eastern Siberia. The bulk of the European breeding population, estimated at up to 420,000 pairs, occurs in Russia. It is a very rare breeding bird in Britain; the breeding population, restricted to the Scottish Highlands, numbers just two-three pairs in most years. The main wintering areas are from the Mediterranean basin and northern Afrotropics across the Middle East and east across southern Asia to Japan.

In Britain, apart from the small breeding population, it is predominantly a scarce passage migrant, with numbers varying from year to year. The prime period for this scarce stint is condensed into the period mid- to late May, with stragglers met with well into June. Autumn numbers are fewer in number, with failed breeders presumably accounting for 'summer' sightings.

Numbers of passage birds are influenced by a number of factors, but weather patterns across the continent between mid-April and mid-May will be critical during overland movement. At this time, periods of prolonged easterly airflow invariably deliver greater numbers of birds to our shores than is the case during years when birds can make the movement from wintering to breeding areas without the influence of a westward drift. Britain lies at the extreme western edge of the migration route, and this is reflected in the variability in the numbers of birds reaching our shores. As would be expected there is an east-coast bias to the records, with Temminck's Stints much rarer further west and into Ireland.

Between 1968 and 2002, over 3,200 were recorded in Britain. The best year during that period was 1987, when the annual total was swelled to 176 birds, most of which were associated with a dramatic spring movement. However, a dramatic influx during spring 2004 ensured that this total was comfortably surpassed when over 220 were noted during the spring alone. 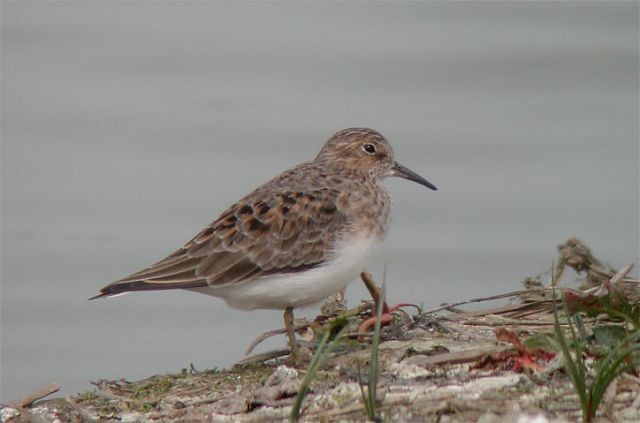 Temminck's Stint: Kent Note the attenuated rear, with the tail extending beyond the primaries. Short-legged with a crouching gait, note also the short and slightly down-curved bill (photo: Barry Wright).

Temminck's Stint is similar in size to Little Stint, but with a distinctly longer silhouette than Little Stint, with an extension of the tail beyond the primary tips. Temminck's are short-legged, habitually 'creeping' around on a crouching gait, often invoking references to its 'mouse-like' actions. The bill is finer than Little Stint and slightly decurved. Legs are pale, unlike the dark legs of Little Stint, and vary from yellowish to brownish.

The plumage is rather dull and uniform at all seasons. Birds in spring generally exhibit some summer plumage, with a variable number of black-centred feathers on the upperparts, mostly amongst the scapulars and mantle. This 'spotted' effect is quite apparent. Other features include a clear-cut greyish-brownish breast band, plain head with a trace of a faint supercilium and a fine eye-ring. The white sides to the tail are unique amongst Calidrids, and are most easily observed when birds first flush, or are landing. The call is a short rising trill which is very distinctive once learnt. This is usually given when the bird is flushed, at which point it rapidly gains height, heading off in rapid fashion.

Where to see Temminck's Stints

On migration, Temminck's Stints favour the edges of freshwater lakes, pools and marshes, although it sometimes visits creeks and lagoons in estuaries. Any such habitat along the eastern side of Britain is worth regular scrutiny during spring migration, but, not surprisingly, some locations are more favoured. Sites with a good track record for this delightful stint in the last few years include:

Click on any of the above locations to find out more details about that site.