May is here and there are already signs that passage is beginning to wind down, even if for long periods this spring it has never really felt like it got started. A handful of new rarities were found, however, and patchers were still getting bits and bobs to keep them going. Wader migration, most noticeably of Bar-tailed Godwit and Whimbrel, continued, but several inland Little Terns kept birders going. Nine sites in five landlocked counties held the species, including twitchable birds for gleeful county year-listers in the likes of Cambridgeshire, Staffordshire and Rutland. Wales scored a national first with a male Iberian Wagtail at Conwy RSPB, Conwy, from 6th. A subspecies of Yellow Wagtail, the taxa has seen a marked upturn of records, with five others comprehensively documented in Britain and Ireland since the first North Yorkshire in 2015 – including another this spring, on St Mary's, Scilly, from 13-16 April (see here).

Wow! Didn’t expect that. After doing a bunk yesterday @DylanMEdwards1 just picked up a yellow wag flying along the estuary. A brisk walk to Benarth hide @RSPBConwy and the Iberian Wagtail was sat outside calling loudly! 3 Wheatear, 8 Ringed Plover, 5 Dunlin, 4 Whimbrel too. pic.twitter.com/DS4wEP1Rxc

A strong Motacilla showing on nearby Anglesey saw a female Citrine Wagtail join the male Blue-headed at Cemlyn on 8th. Anglesey's first since a male favoured the very same fields back in May 2011, the species is a much rarer visitor to Britain in spring than autumn – this latest arrival will be sure to prove a hit if it lingers overnight. A suitably rusty Red-throated Pipit brightened up Fair Isle on 8th. Other goodies on the island this week included a possible Iberian Chiffchaff trapped and ringed on 7th, plus the male Lapland Bunting and a young White-tailed Eagle. The Northern Isles as a whole enjoyed a bumper week of White-tailed Eagle sightings, including a more-than-respectable four over North Ronaldsay, Orkney. Sunday proved a generally productive day for new arrivals further south too: a European Bee-eater was audible as it flew over Sizewell, Suffolk, while a female Red-backed Shrike was at Kilnsea, East Yorkshire.

In the Hebrides, a male Ortolan Bunting frequented a garden at Port Nis, Lewis, on 4-5th. It is the first Ortolan for the island since 1962, with the last for the archipelago as a whole dating back to 2008. A Dark-eyed Junco in a private garden on Islay, Argyll, on 7th proved a classic spring one-day wonder and represented a first for the island. A Tawny Pipit was tracked along the north Norfolk coast between Weybourne and Gramborough Hill on 6th; the same day a Richard's Pipit was at Great Holland, Essex. A young female Woodchat Shrike at Portland, Dorset, on 8th proved popular, with another at Kynance Cove, Cornwall, on 4th. In Scilly, a male Golden Oriole remained mobile around Carreg Dhu, St Mary's. A total of five Iberian Chiffchaff candidates were noted – confirmed birds at Regent's Park, London, and Rowberrow Warren, Somerset, and probables on Fair Isle and at Bordon and Otterbourne, Hampshire. The Dusky Warbler hung on at Stiffkey, Norfolk. A red-letter day at Belvide Reservoir on 3rd saw a Savi's Warbler – Staffordshire's second and first since 1977 – discovered, alongside a surprise Manx Shearwater. The elusive Savi's remained until 7th at least, although the 'Manxie' was unfortunately taken into care on 4th and expired shortly after. Elsewhere, two Red-rumped Swallows reached North Ronaldsay, Orkney, on 7th, with two others along England's east coast (at Budle Bay, Northumberland, and Spurn, East Yorkshire). Just two Wrynecks were noted (in South Yorkshire and Essex) and it proved a steadier week for Hoopoes, too: birds in five counties included one at Enfield, London. After seven weeks in the wilderness, Ireland's Egyptian Vulture resurfaced just a short distance from the last sighting – on a lamppost on the outskirts of Athlone, Co Roscommon, on 6th. A male Pallid/Montagu's Harrier flew north over Snettisham RSPB, Norfolk, on 7th, with a smart male Montagu's over Trewey Common, Cornwall, the following day. After a few days back out in the vast expanse of the North Sea, the Black-browed Albatross was back and settled at Bempton Cliffs RSPB, East Yorkshire, over the weekend. Five Long-tailed Skuas scythed past Aird an Runair, North Uist, on 6th; Pomarine Skuas gave south-eastern seawatchers plenty of reason to get outside, with small-scale passage enjoyed on 3rd and 8th. It was far from a classic week for Black Terns, but no fewer than 80 were nevertheless logged past Burnham-on-Sea, Somerset, on 4th. Another 52 flew high north-east over the Severn Bridge the previous day, too, underlying the importance of this flyway for the species. A strong shout for an Eastern Common Tern that dropped into Abbotsbury Swannery, Dorset, late on 6th is perhaps the candidate present there between 2013 and 2018. Intriguing reports from Westray, Orkney, saw a possible Sooty Tern on 4th followed by a Gull-billed Tern the next day. An adult Bonaparte's Gull continued at Tacumshin, Co Wexford, while a possible flew east past Rustington, West Sussex. Pectoral Sandpipers were at Northwick Warth, Gloucestershire, Holkham Freshmarsh, Norfolk, and Hollesley Marshes RSPB, Suffolk, with migrant Eurasian Stone-curlews in Kent and Lincolnshire and trips of Eurasian Dotterel at seven sites. A first-summer American Golden Plover was a brief visitor to Grindon Lough, Northumberland, on 4th, with another decent candidate at Minsmere RSPB, Suffolk, the following day. Black-winged Stilt (second from left and back right), Worth Marsh, Kent (Shane Vale).

The contentious Blue-winged/Cinnamon Teal lasted at Marlow, Buckinghamshire, for another week, with the female Ferruginous Duck still at Grimley, Worcestershire, until 7th. Just the one Green-winged Teal was recorded – at Loch of Kinnordy RSPB, Angus & Dundee – with American Wigeon at Cresswell Pond, Northumberland, and Loch Connell, Dumfries & Galloway. The Cleveland King Eider moved up the coast from Marske-by-the-Sea to Redcar on 4th before disappearing. Another lingered at Musselburgh, Lothian, with up to four Surf Scoter between Musselburgh and nearby Gosford Bay. 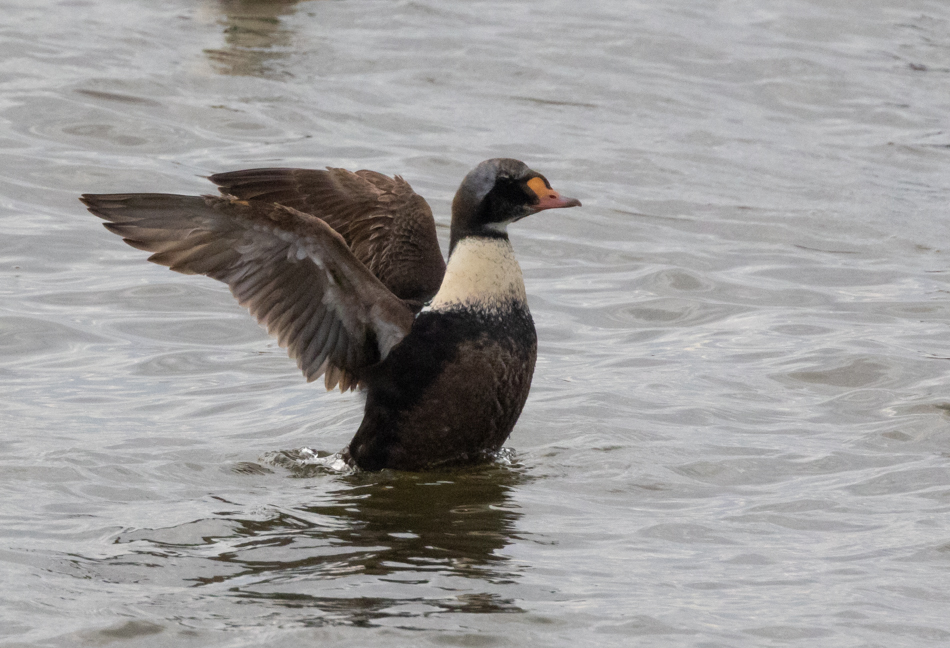 In Norfolk, the Red-breasted Goose remained loyal to Blakeney Harbour throughout, with a Black Brant holding out at Kilnsea, East Yorkshire.

A notable White-billed Diver record saw one off Tory Island, Co Donegal, with others still in Highland, Outer Hebrides and Shetland. The Argyll Pied-billed Grebe at Loch Feorlin was reported on two dates. Best find of the week concerned a female Caspian Stonechat on Texel, The Netherlands, on 7-8th, the country's second after a first-winter male on Vlieland in autumn 2012. An Egyptian Vulture was filmed over Dwingelderveld on 7th, with a released immature Bearded Vulture at Deleen on 5th. Elsewhere, the Western Swamphen continued at Alblasserdam. France's eighth Steppe Eagle – an immature – flirted with the Channel coast at Mers-les-Bains on 3-4th, with an adult Elegant Tern still on Île de Noirmoutier and immature Brown Booby still on îlot Saint-Ferréol. The adult drake White-winged Scoter held on at Keflavík, Iceland; Stejneger's Scoter were logged off both Horssten and Hörnefors, Sweden.