It was the turn of the seawatchers to generate the megas this week, but as so often views proved fleeting and sometimes uncertain. Pick of the crop was probably a North Atlantic Little Shearwater reported past The Fodry on Loop Head (Co. Clare) on 31st. This was the fourth report of this species since the start of August, following earlier reports from Cork, Kerry and Devon, and fits in well with the classic August/September peak of sightings of this species off western coasts. A possible Eurasian Crag Martin was reported heading south off the Spurn peninsula (E Yorks) on 2nd, but hybrids of other hirundines could not be ruled out. Also defying definite identification were possible Hudsonian Whimbrels off Strumble Head (Pembrokeshire) on 29th and Chanonry Point (Highland) the following day. There was no doubt about the identification of the week's final two mega-rarities, though: the Fair Isle Swinhoe's Storm-petrel was retrapped in the early hours of 3rd and the adult Pied-billed Grebe was still on Sruhillbeg Lough on Achill Island (Mayo) until 3rd at least, though it was reported as distant and elusive. 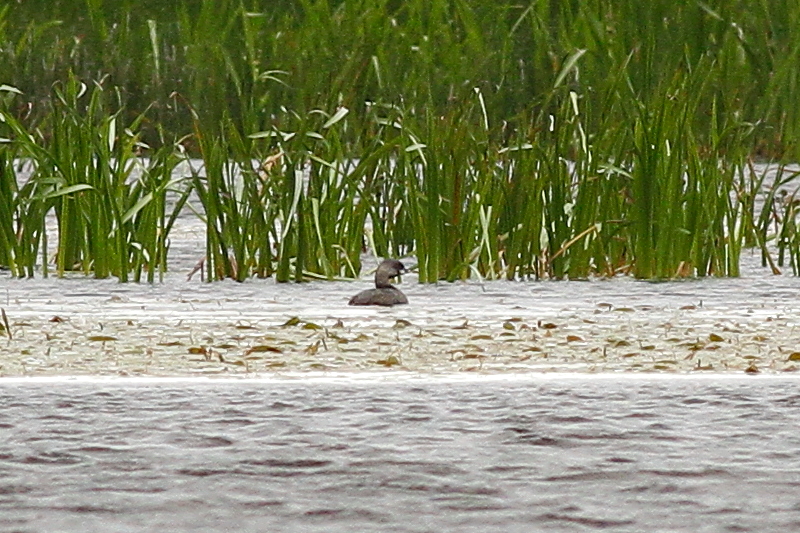 Among the more expected seawatching fare, a couple of Cory's Shearwaters were seen off Cornwall and Kerry and Great Shearwaters were recorded in single figures from land off Donegal, Mayo, Clare and Cornwall, with larger numbers confined to offshore sightings. Leach's Storm-petrels were noted, again in small numbers, off western coasts from 29th to 2nd. At least twenty sightings of Sabine's Gull were reported, from all around the coastline; the peak was on 30th.

Great White Egrets turned up across England, from Sheppey (Kent) in the southeast to Marshside (Lancs) in the northwest, but the main concentration of records was, as ever, on the Somerset Levels, where up to seven were still being seen to 1st. The only Cattle Egrets of the week were one present for an hour or so at Blithfield Reservoir (Staffs) on the evening of 3rd, and another at Elmley (Kent). The long-staying 1st-summer Night Heron at Old Moor (S Yorks) continued to haunt the wader scrape to 4th. Glossy Ibis were reported from Meare Heath and Durleigh Reservoir (both Somerset); the timings seem to suggest these are different birds, although the two sites are only 11 miles apart.

A handful of new ducks provided interest for inland birders: an adult drake Blue-winged Teal was found at Coonagh (Limerick) on 3rd, with a Garganey for company, and an eclipse drake Lesser Scaup was a good spot at Pennington Flash (Gtr Manchester) from 2nd onwards, on what was an unusual date. New Ring-necked Ducks appeared on Lough Gara (Sligo) on 2nd and Castle Lake, Bishop Middleham (Durham) on 3rd, while the drakes at Lough Shivnagh (Donegal) and Barns Ness (Lothian) from previous weeks were still present into this week. Two Ferruginous Ducks, one of each sex, were on Chew Valley Lake (Somerset). At sea, Surf Scoters were seen off Murcar and Blackdog (Aberdeenshire) and Ballyconneely (Galway). 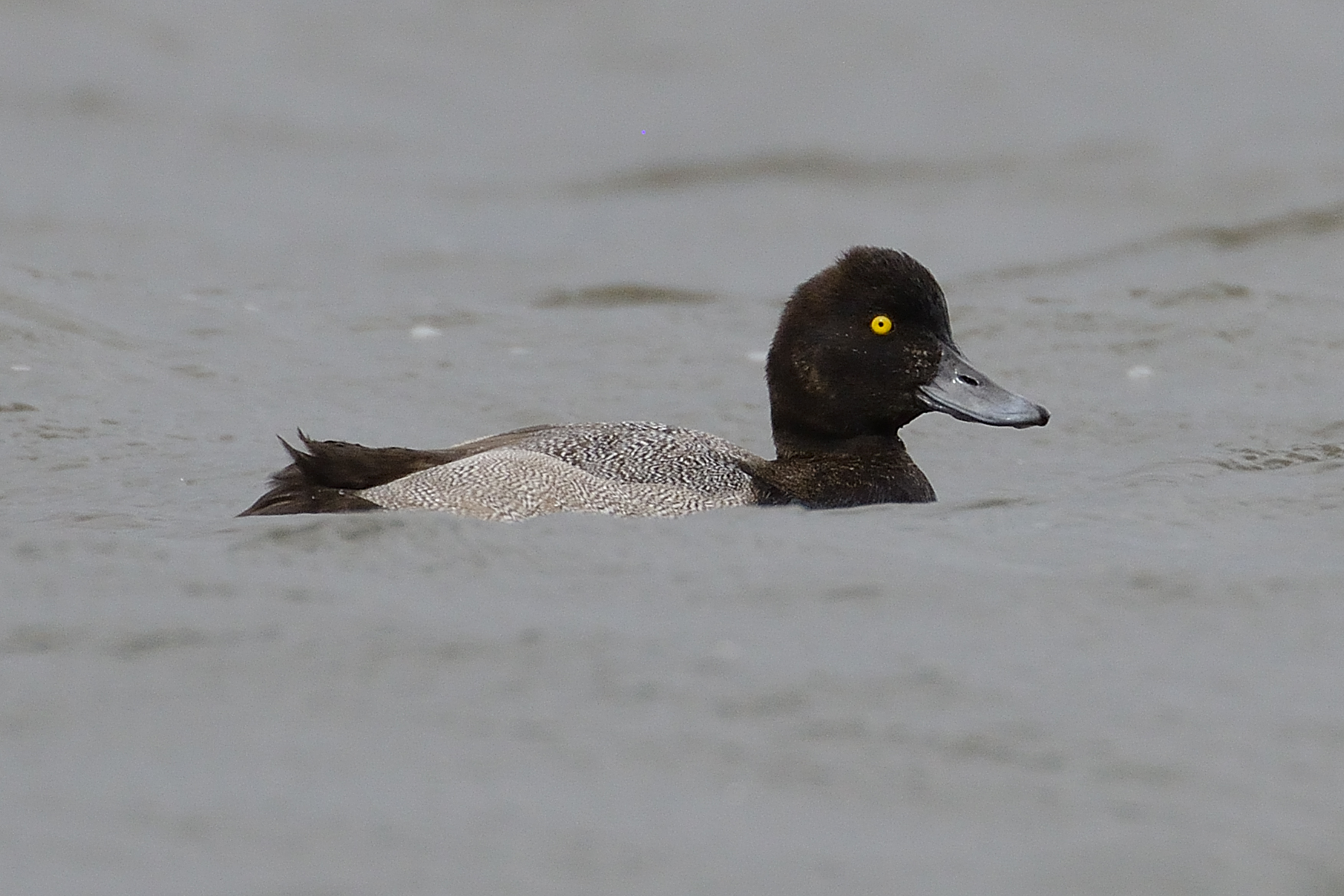 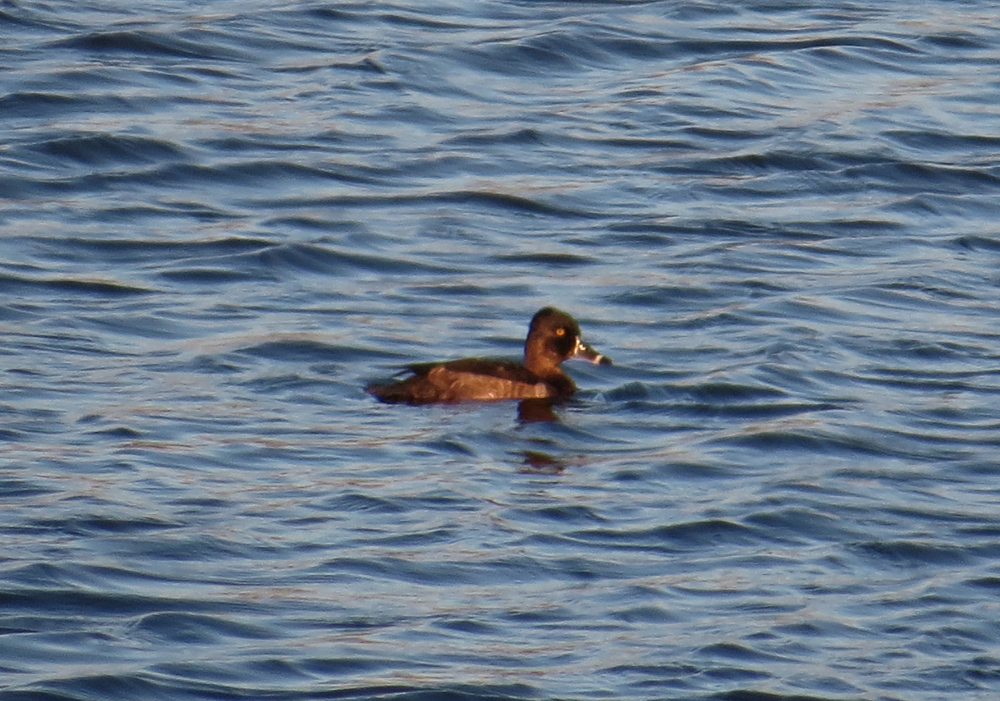 A handful of migrant Corncrake reports were received from the east coast, as follows (reading south to north): Colne Point (Essex) on 3rd, Orford Ness (Suffolk) on 1st, Waxham (Norfolk) on 29th, and probably two at Spurn (E Yorks) on 31st. Others were on Fair Isle and Shetland. New Spotted Crakes were at Wyver Lane (Derbys) from 29th, Eyebrook Reservoir (Leics) and Ynys-Hir (Ceredigion) from 30th, and Dagenham Chase (London) from 31st; Warwickshire boasted two, at Ladywalk NR on 3rd and 4th, and Napton Reservoir on 4th. 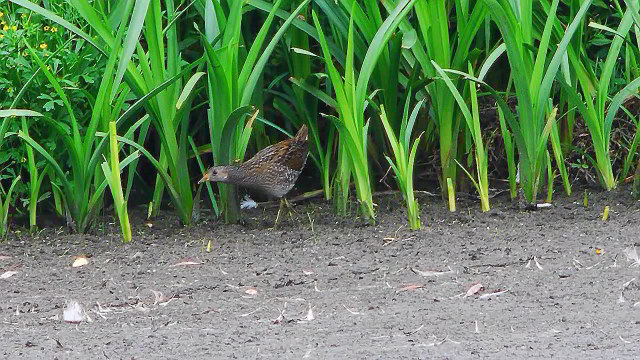 The male Snowy Owl on Arranmore Island (Donegal) saw out another lonely week. A delayed report of a juvenile Pallid Harrier near Sandwood Bay (Highland) on 25th coincides with the usual annual peak period for records of the species, though if confirmed it will be a first for Highland. Seventeen Honey Buzzard sightings were well spread across southern English counties, from Dorset to Norfolk, with a couple more in East Anglia, a further cluster in Nottinghamshire/Yorkshire, and outliers in Worcestershire and Pembrokeshire. A couple of unseasonable Rough-legged Buzzard reports comprised one from Tarbat Ness (Highland) on 29th and an eyebrow-raising claim of three over Holt (Norfolk) on 28th.

Waders were prominent, most notably Semipalmated Sandpipers. Up to 7 birds were reported from sites in a wide western arc from Lewis in the Outer Hebrides south to Brownsea Island (Dorset), taking in Donegal, Clare, Wexford and Pembrokeshire in between. An adult Stilt Sandpiper graced Neumann's Flash near Northwich in Cheshire from 31st, later relocating to Elton Hall Flash near Sandbach, some 10 miles to the southeast, during the morning of 2nd, and was still present at the latter site at the time of writing. The Lesser Yellowlegs continued its stay at the National Wetland Centre (Carmarthenshire) until 2nd, and new birds popped up at Walmsley Sanctuary (Cornwall) on 3rd and on the Gann Estuary (Pembrokeshire) on 4th. The Wilson's Phalarope remained at Belfast Lough to 30th. 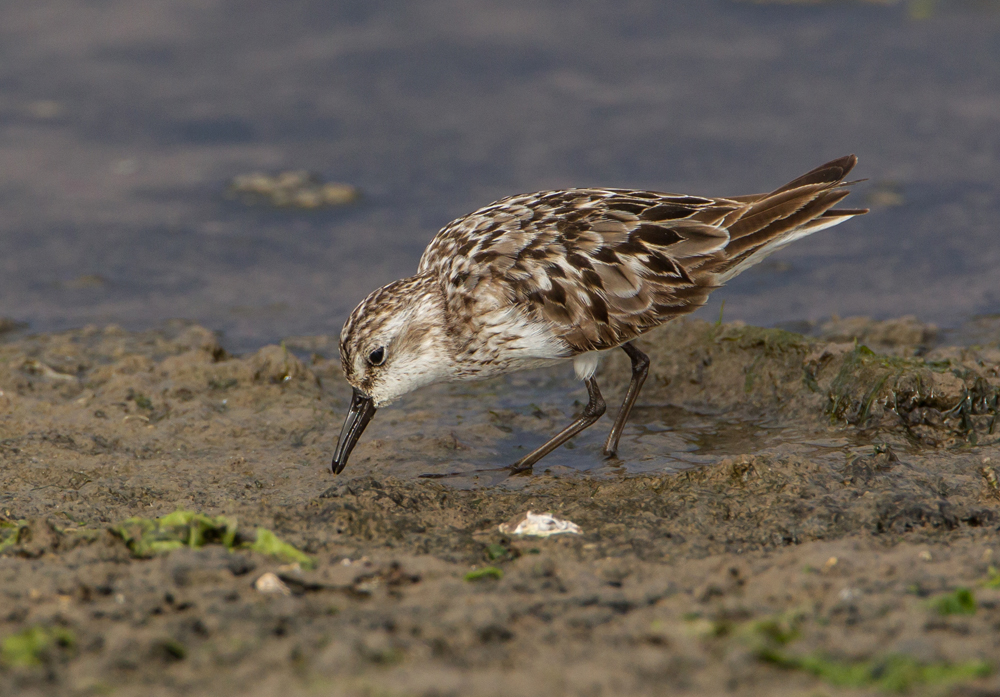 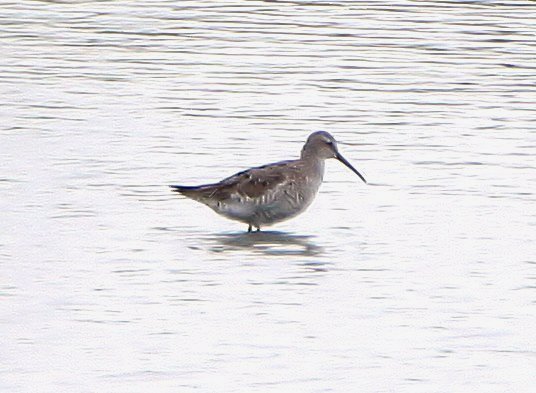 American Golden Plovers were restricted to the northern coasts of Ireland and Scotland — in County Mayo, South Uist, Benbecula and North Ronaldsay —  the exception being an adult in the southeast of Ireland at Tacumshin (Wexford) on 30th and 31st. The only Temminck's Stint of the week was on the Oare Marshes (Kent) on 31st. Eight White-rumped Sandpipers were scattered between the four corners of Britain and Ireland — the extremes being Blennerville (Kerry) in the west, Foula (Shetland) in the north, Havergate (Suffolk) in the east and Keyhaven (Hants) in the south — while three Baird's Sandpipers turned up during the week, at Tacumshin (Wexford) on 30th, Wester Sand (Shetland) on 31st and Levington Creek (Suffolk) on 2nd. A total of 39 reports of Pectoral Sandpipers came from 19 sites, mostly coastal or estuarine; the inland exceptions were Idle Valley NR (Notts), Grindon Lough (Northumberland) and Frankfield Loch (Clyde). Three Buff-breasted Sandpipers were all in the Western and Northern Isles, at Northton (Harris) and Baleshare (N. Uist) on 3rd and Unst (Shetland) on 4th. 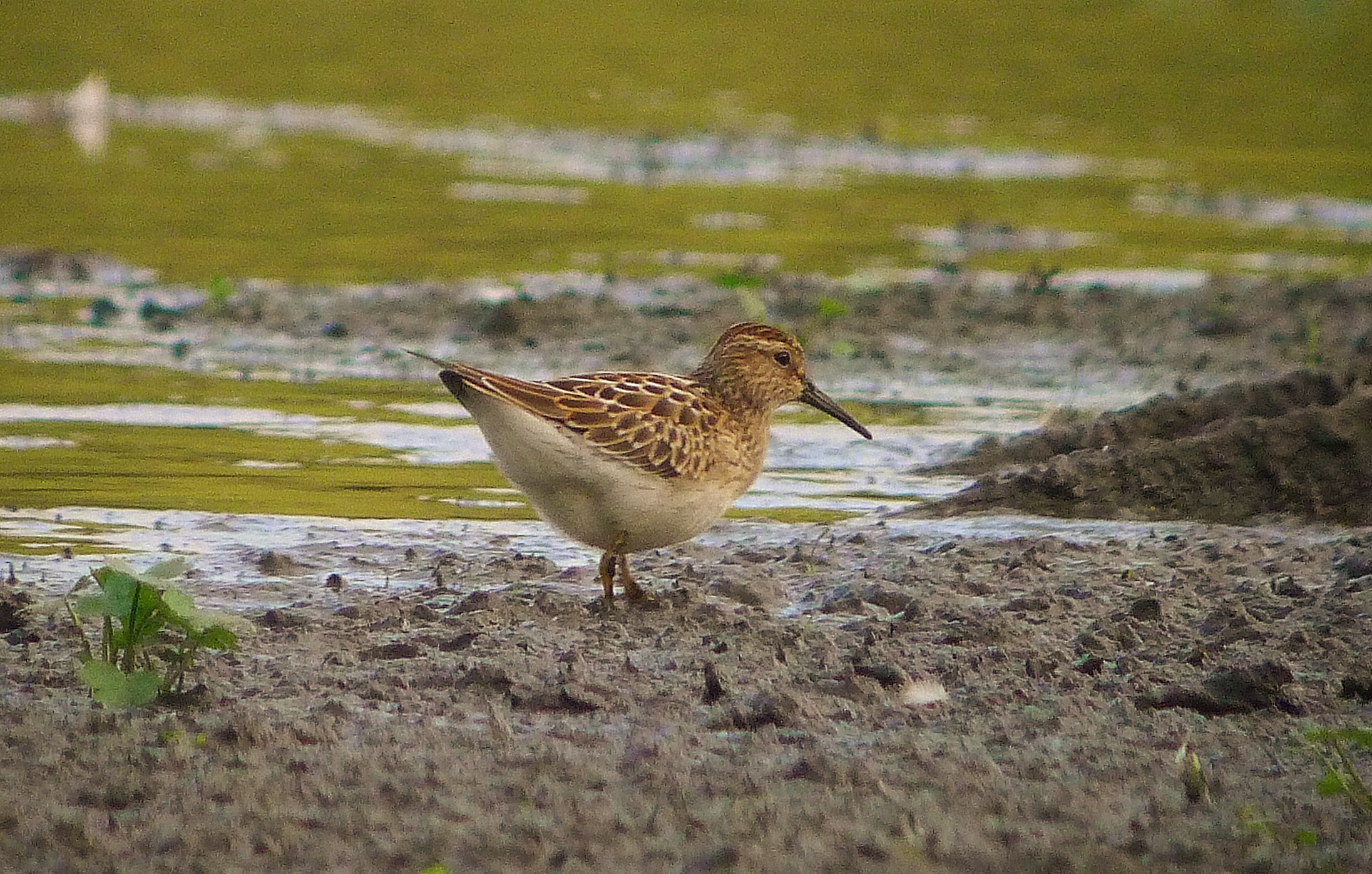 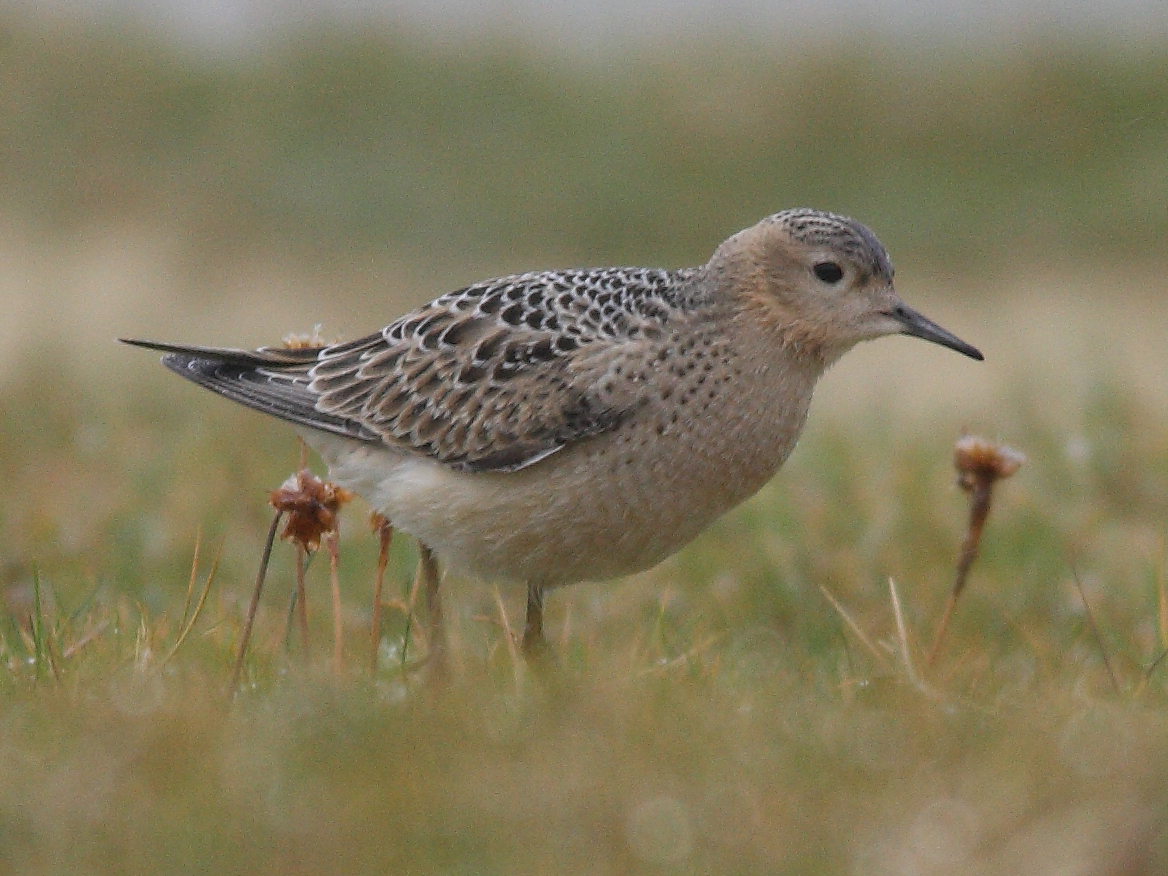 Turning to gulls, Heysham's Bonaparte's Gull seems to have departed its regular Lancashire haunt, being last seen on 1st, but an adult was at Portmore Lough (Antrim) on 3rd. The adult Ring-billed Gull returned to Kinneil Lagoon (Forth) on 31st after a fortnight's absence, the adult on Tiree (Argyll) stayed to 30th and the 1st-summer at Blennerville (Kerry) remained to 1st at least. The juvenile White-winged Black Tern was last reported from Cruisetown Strand (Louth) on 29th.

A Hoopoe at Hersden sewage works (Kent) on 29th was joined by a Wryneck; the latter species had another strong week, with 154 reports. The majority were south of a line from the Bristol Channel to the Humber, with a few in west Wales and a notable inland scattering across the Home Counties. The northernmost bird was that still at Whitburn Coastal Park to 30th, and other northern individuals were one in a garden in Mossley (Gtr Manchester) on 30th and another at Torver (Cumbria) on 31st. 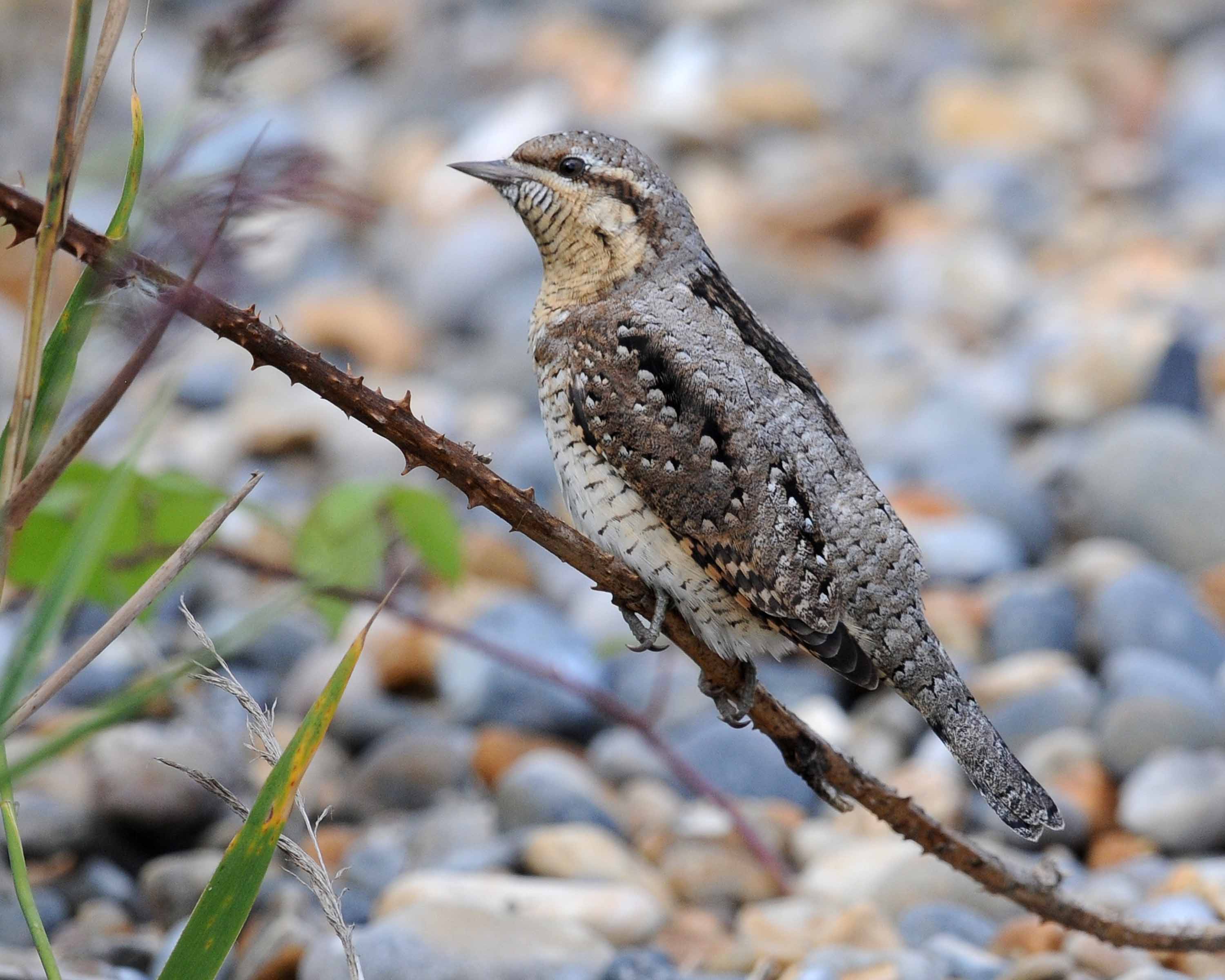 The Short-toed Lark on Bryher (Scilly) reappeared on 29th after going unreported for 10 days, and the bird at Gibraltar Point (Lincs) was last reported on 1st. There were still plenty of Citrine Wagtails about, with new birds appearing at Virkie Meadows (Shetland) and Abbotsbury (Dorset) on 29th, Melby Loch and Fair Isle (Shetland) on 31st, Treleddyd-fawr (Pembrokeshire; two probables) on 3rd, and Windmill Farm (Cornwall) on 4th, the last-mentioned with a slightly alarming warning to "beware of the bull". Other birds lingering from the last review period were still on Tresco and St Mary's (Scilly) and North Ronaldsay (Orkney). A Tawny Pipit was seen and heard briefly on the Isle of Wight on the evening of 3rd, and a possible was noted earlier in the week at Gibraltar Point (Lincs). Fifty Red-backed Shrikes were reported from around 16 sites, all coastal and mostly involving juveniles, as would be expected. 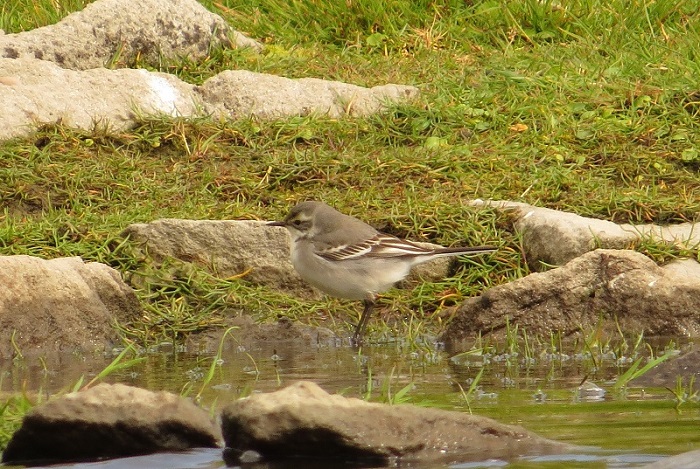 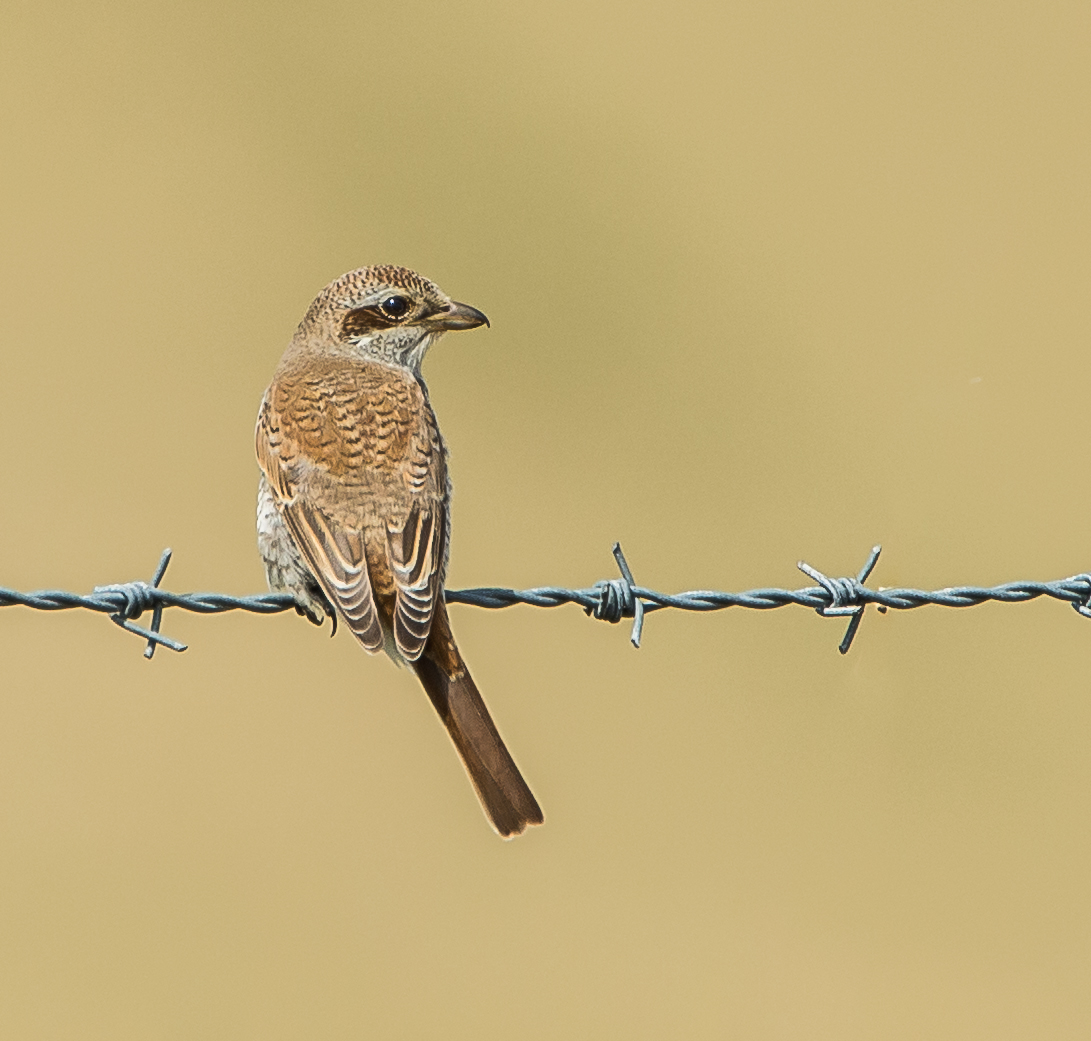 A Thrush Nightingale was still on Fair Isle to 31st but has not been seen since. Only two Booted Warblers were reported during the period, both on Shetland, and two Melodious Warblers, at Three Castles Head (Cork) and on Bardsey Island (Gwynedd), both on 3rd. Icterine Warblers fared slightly better, with birds at five sites: Portland (a bird trapped and ringed), Donna Nook (Lincs), Fair Isle, Whalsay and Out Skerries (all Shetland). There were only three new Greenish Warblers, on Unst (Shetland), the Saltee Islands (Wexford) and at Baltimore (Cork), but the popular bird at Whitburn Coastal Park lingered to 2nd. Six or seven Barred Warblers came from sites ranging up the east coast from Suffolk to Shetland, with new birds arriving at Girdle Ness (Aberdeenshire) and Landguard (Suffolk) on 29th and North Ronaldsay on 30th. There was a similar meagre haul of Red-breasted Flycatchers to last week, with five birds popping up at the traditional sites of Tresco (Scilly), Spurn and Flamborough Head (East Yorks), and in Cork at Mizen and Galley Heads. 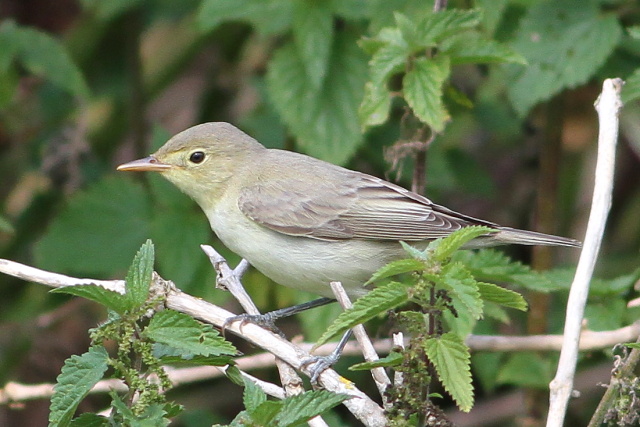 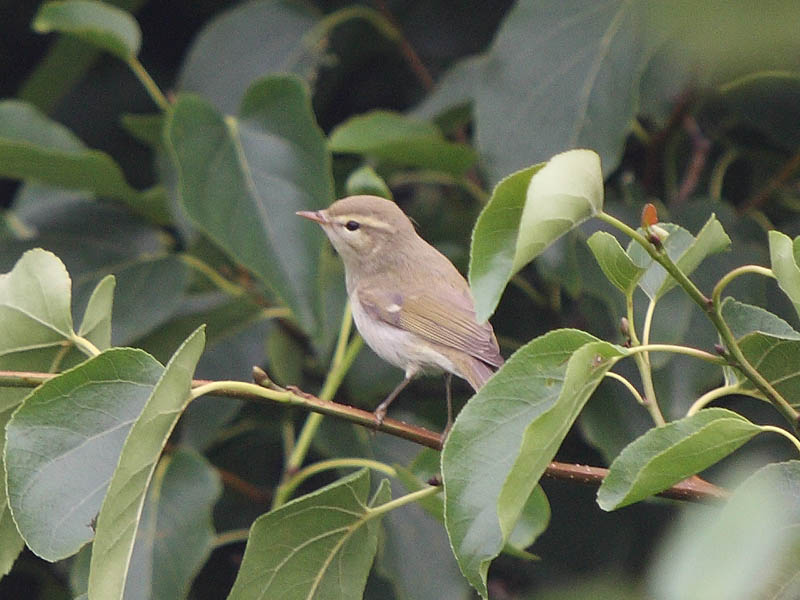 Up to three Ortolan Buntings were seen on various dates between 27th and 4th at Noirmont Point (Jersey), while Common Rosefinches were limited to the other extreme of the archipelago, with one bird in Orkney and three or four on Shetland. The flock of Two-barred Crossbills continued to attract visitors to Broomhead Reservoir (gallingly, within spitting distance of BirdGuides' former office at Jack House!) to 4th at least , and the juvenile bird at Lynford Arboretum was last reported on 2nd (though a report of an adult female there was later retracted). Finally, last week's juvenile Rose-coloured Starling hung around at Horsey (Norfolk) to 3rd, and a second was in Warna's Cove on St Agnes (Scilly), also on 3rd. 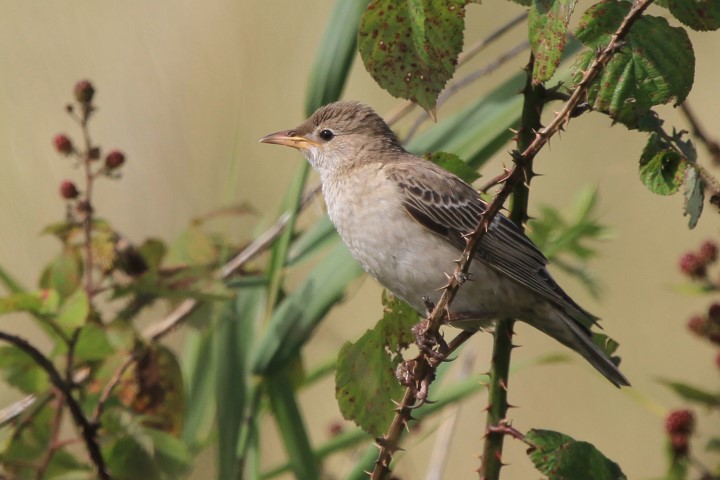 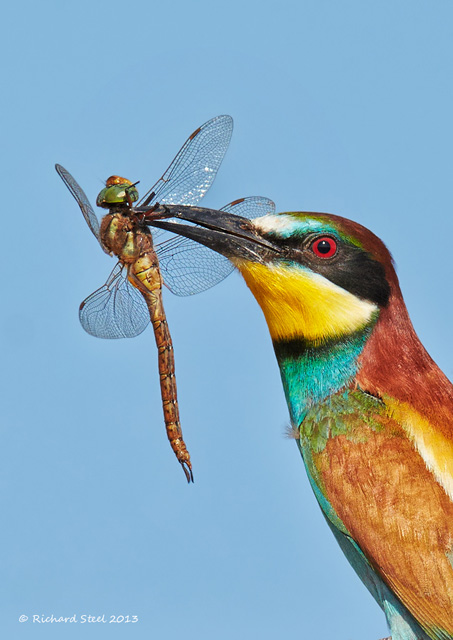 After a productive trip to Hungary last year, top British bird photographer Richard Steel headed eastwards again this summer, this time to Romania. A full account of Richard's trip can be seen on his blog, but he has uploaded over 30 of his best shots to BirdGuides, four of which have already been included in our Notable Images selections. This week, a stunning close-up of a Bee-eater clutching a dragonfly takes Richard's Photo of the Week tally to eight. Even without the prey item, such a colourful and sharp close-up of this beautiful species would have made a great image, but the detail and 'pose' of the dragonfly clasped hopelessly in the bird's bill-tip elevate this to the 'wow' category. We're already looking forward to the results of Richard's next photo trip. 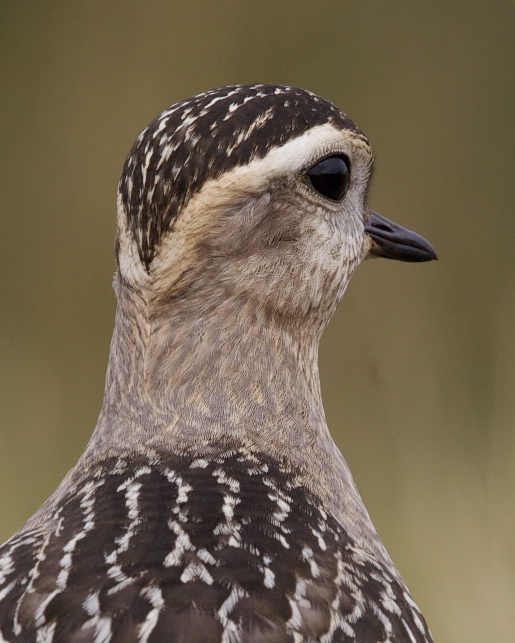 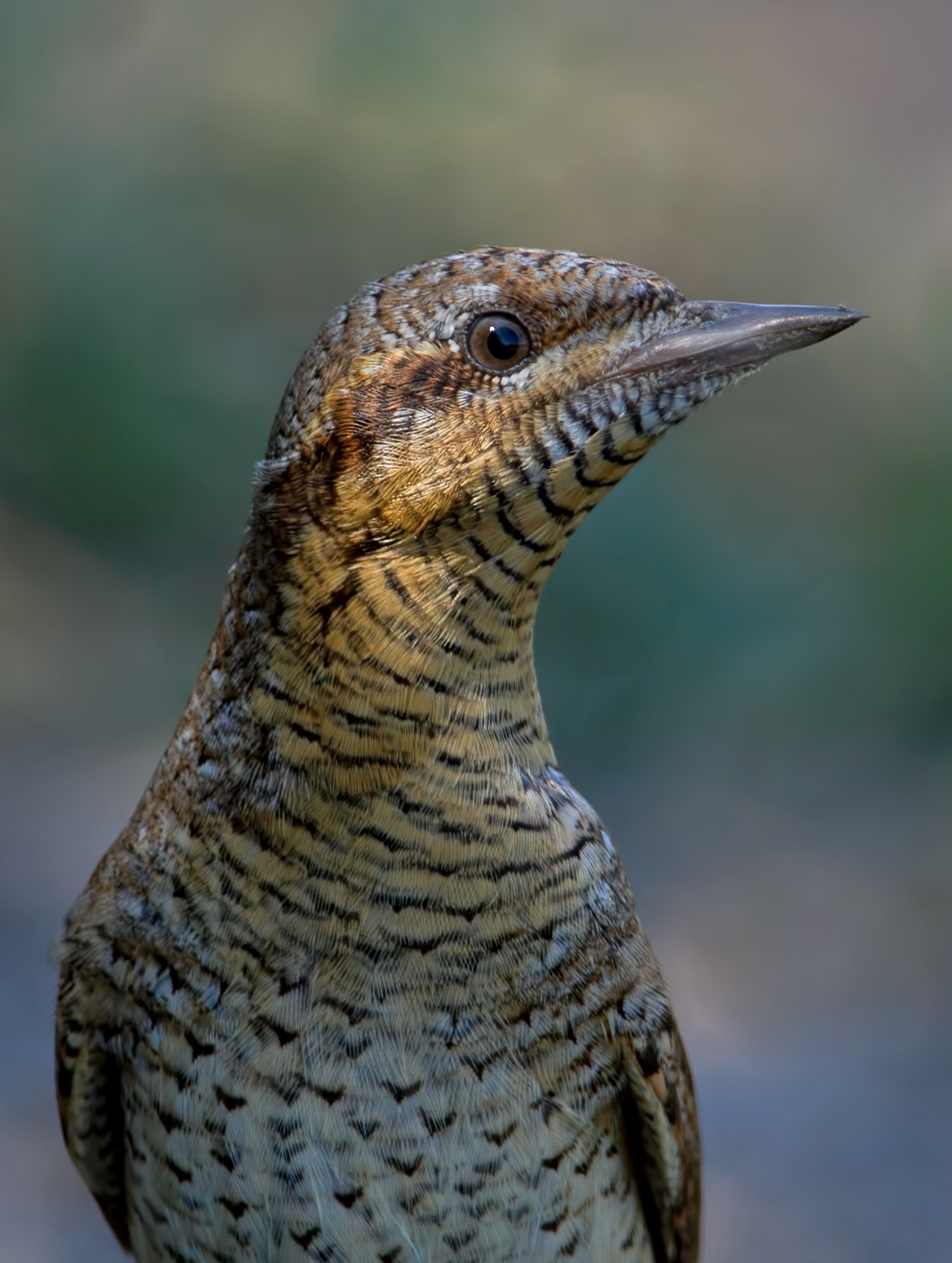 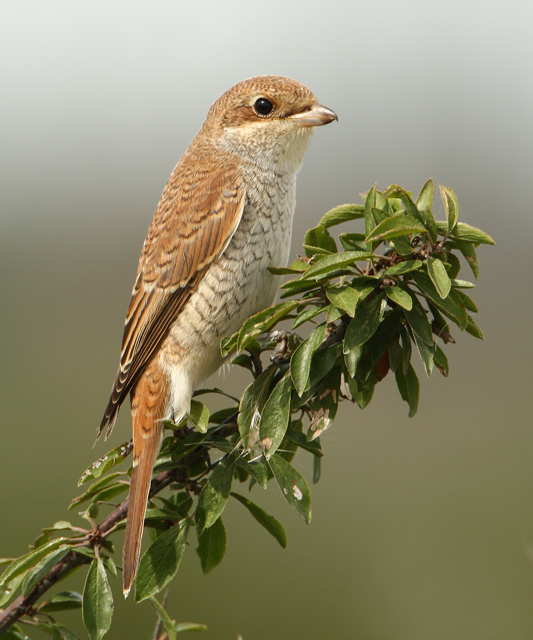 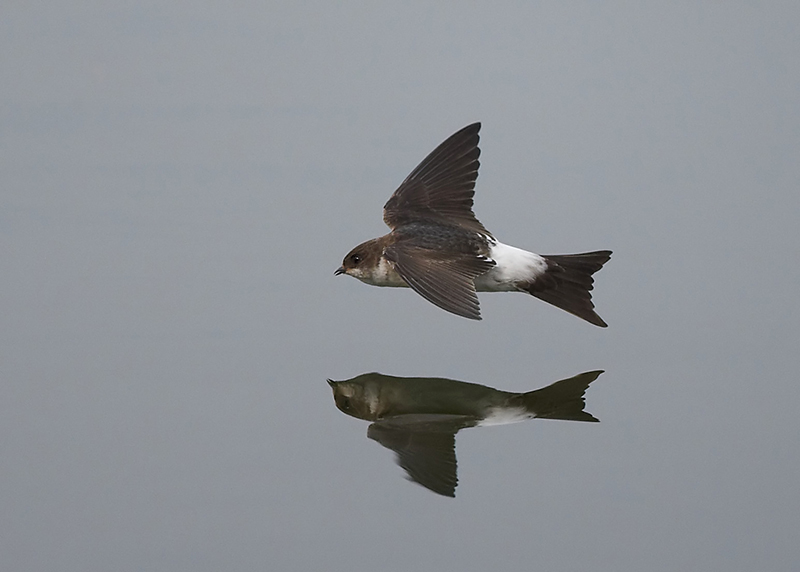 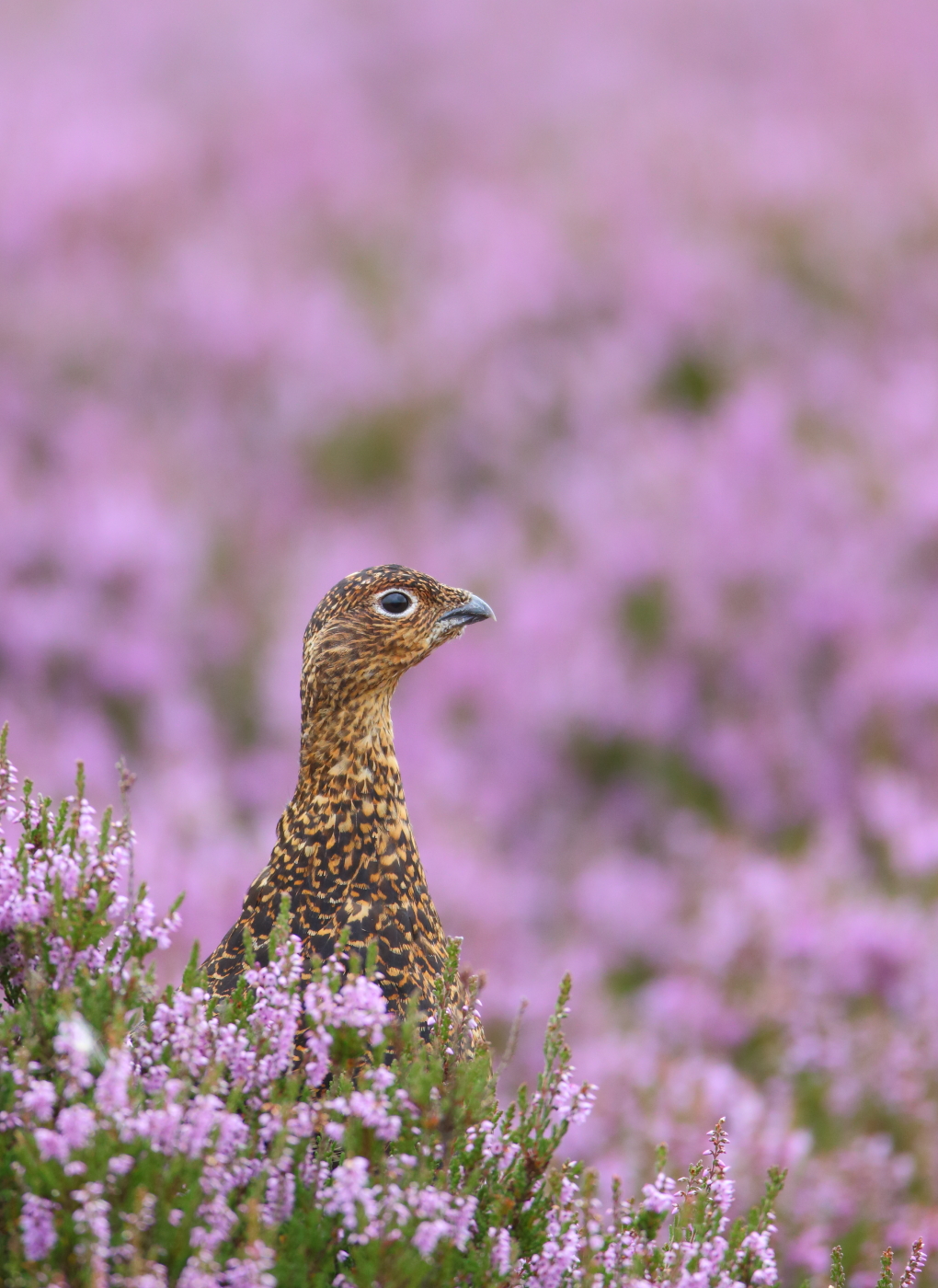 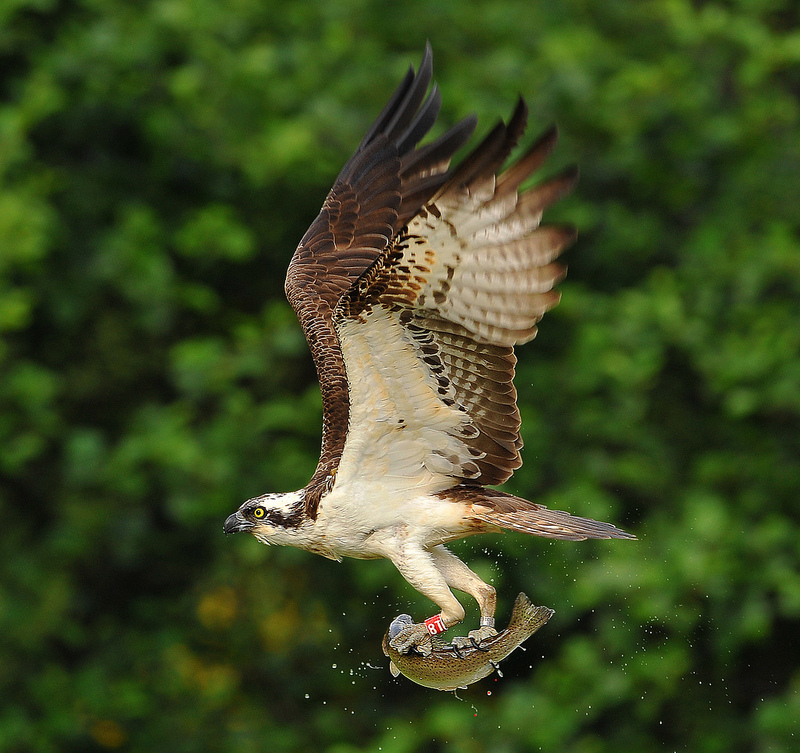 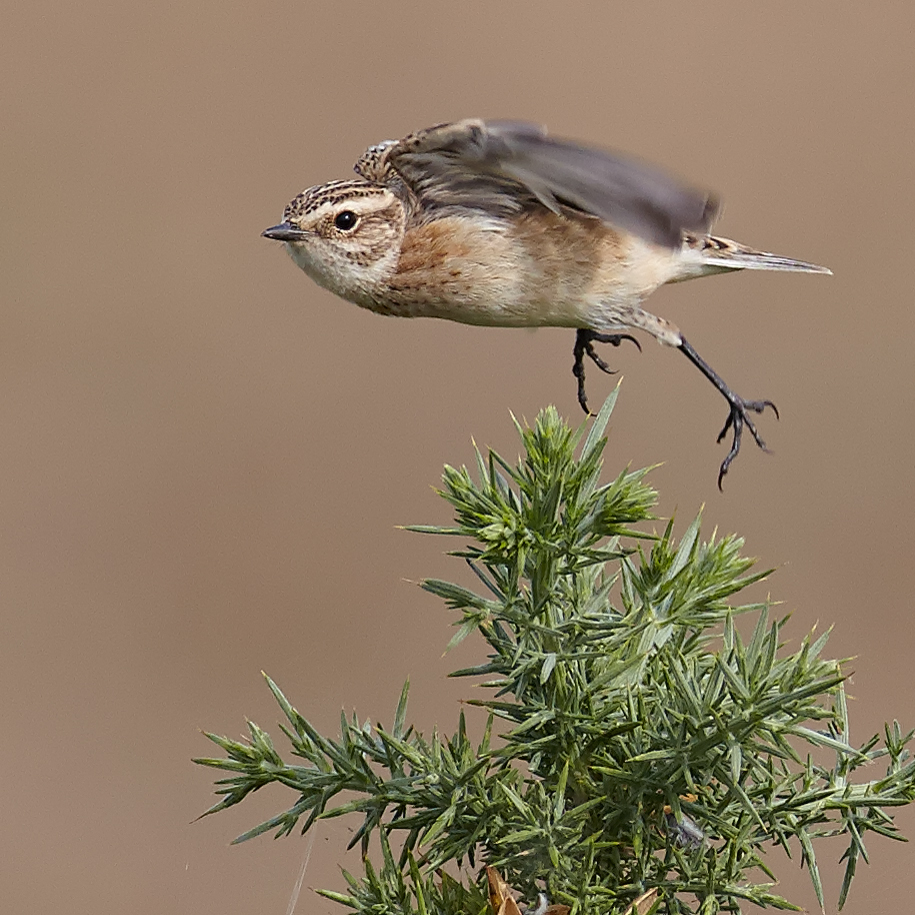 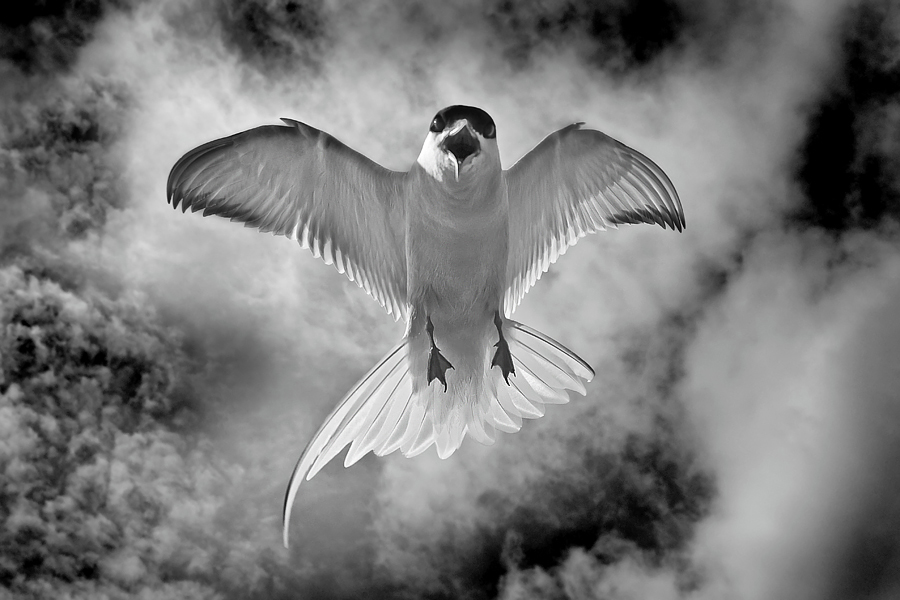 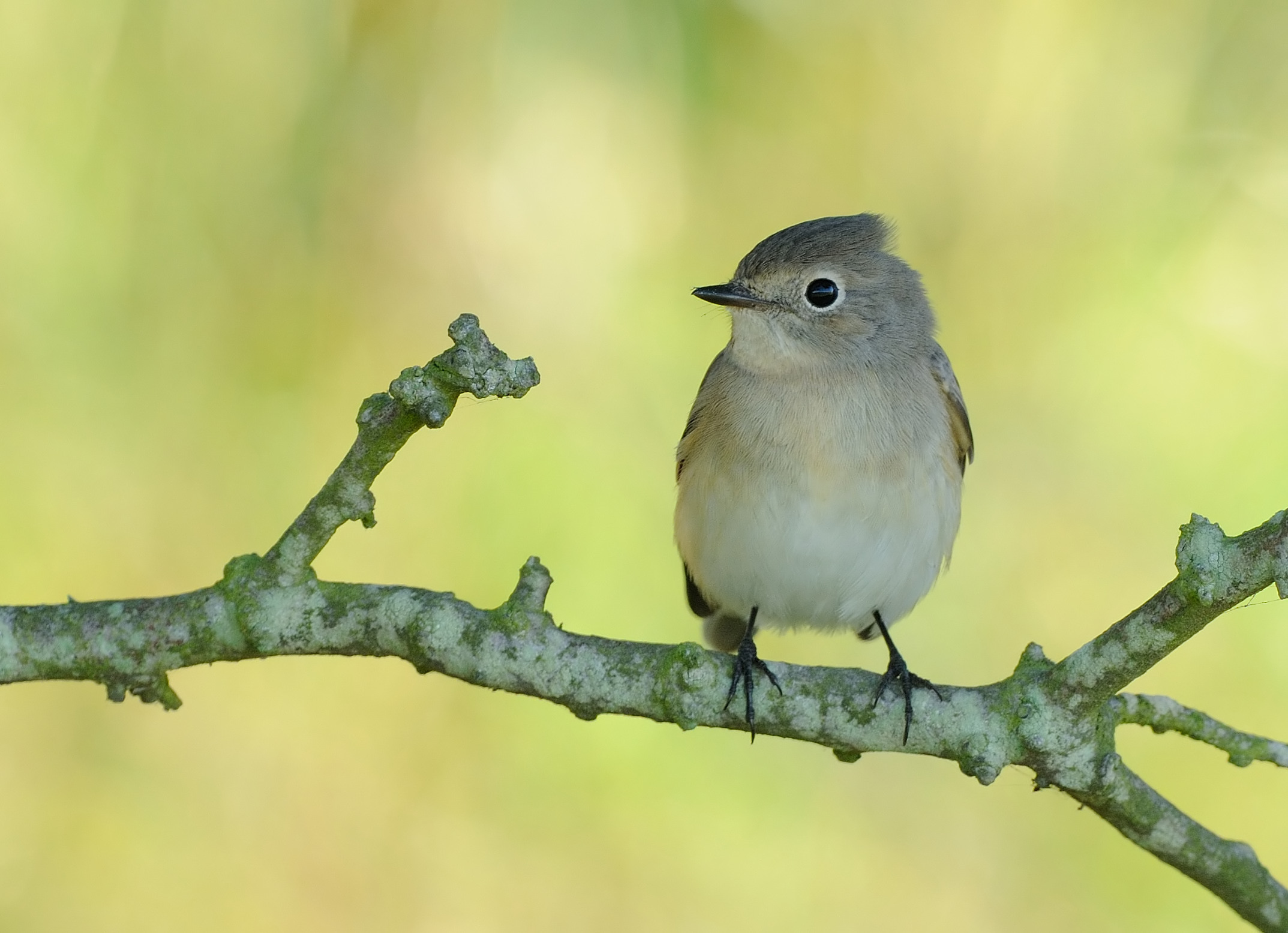 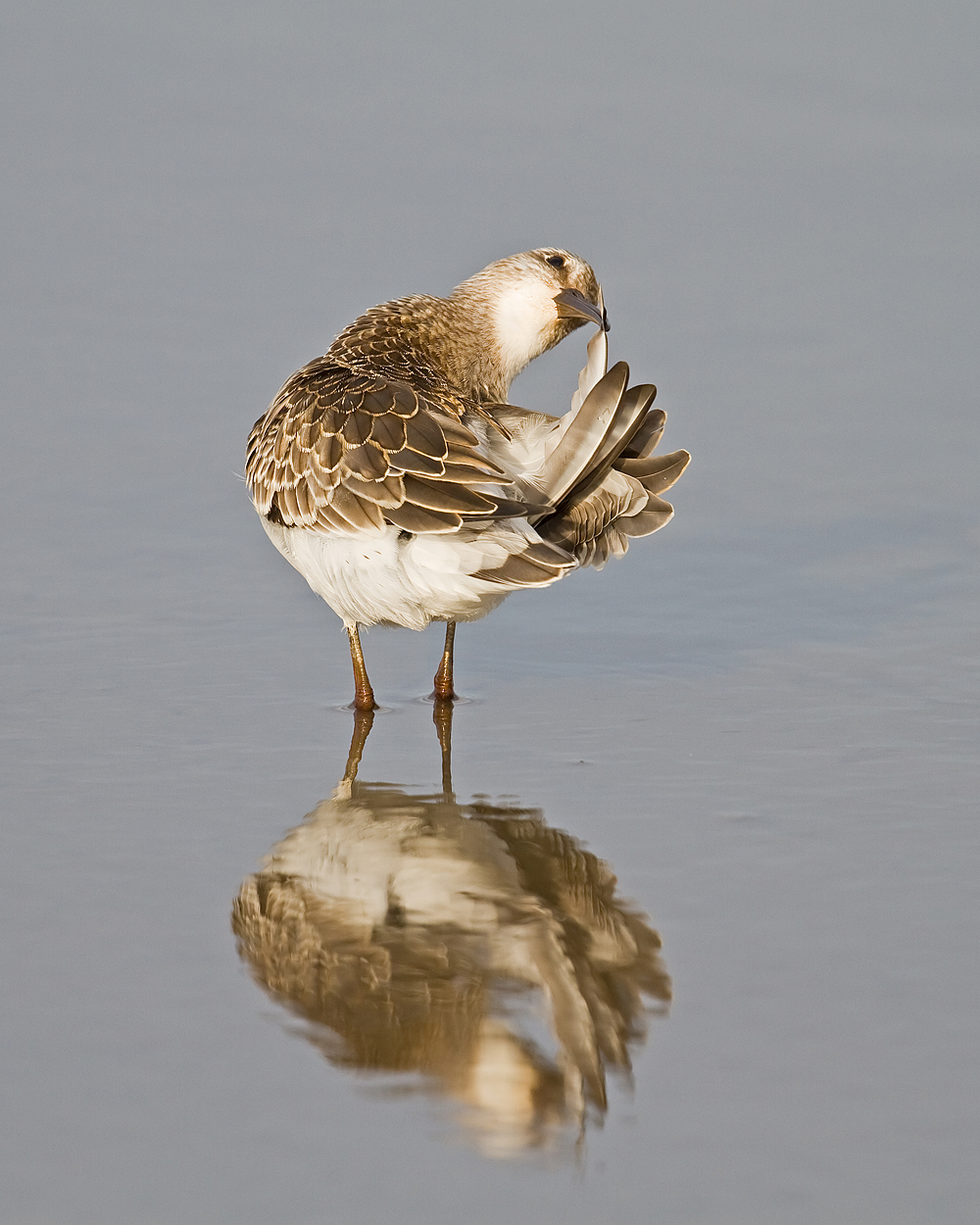