A mild first part of the week (with temperatures back around the seasonal norm for many) gave way to another surge of the continental chills as the end of the review period approached. Rumour has it that the long-range forecast for the oncoming new month will see the cold continue, and the best bird of the week certainly had an Arctic influence.

The stunning dark juvenile gull that lingered on Ross Beach, Cleggan (Co. Galway) for much of the past seven days was initially seen at the tail end of last week. It was thought, initially, to have been perhaps a hybrid (with maybe some Glaucous-winged Gull influence) or perhaps a juvenile American Herring Gull. Persistence paid off this week though for the bird's finder; as the west-coast weather settled down a little, this ultra-distinctive individual could be scrutinised in more convivial conditions, and, on 22nd, the bird was finally identified as a Thayer's Gull. It remained for admirers to 26th. As is often the way, there has been further debate as to the bird's identity, but many people seem content that the correct conclusion has been reached now. 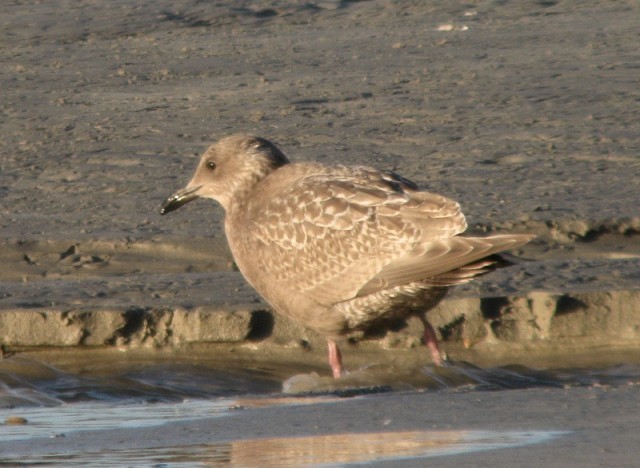 British birders not willing to cross the Irish Sea are still waiting for their first Thayer's Gull (although the bird in Oxfordshire, Derbyshire and North Yorkshire in the winter of 2007/08 ran it close; very close in fact). However, Ireland has at least six down on the record books (including one for the north) since the first accepted record, in County Cork in February 1990.

In Cornwall, the juvenile Pallid Harrier was seen again at dusk near Sennen on 25th (having probably appeared again on 23rd). The only twitchable Black-throated Thrush of the month's remarkable (reported) quintet continued to delight all comers to Newholm near Whitby (North Yorkshire) this week; it was still as confiding and photogenic as you could wish for. In Wales, the exceptional juvenile Black Kite (or possible Black-eared Kite) continued to perform amongst the rusty throng of Red Kite cousins at the Gigrin Farm feeding station in Powys until 26th at least. In Ireland, the Western Palearctic's first American Eider was again in Glassagh Bay near Fanad Head (Co. Donegal) on 26th, adding a little extra spice for travellers journeying to see the Galway gull. 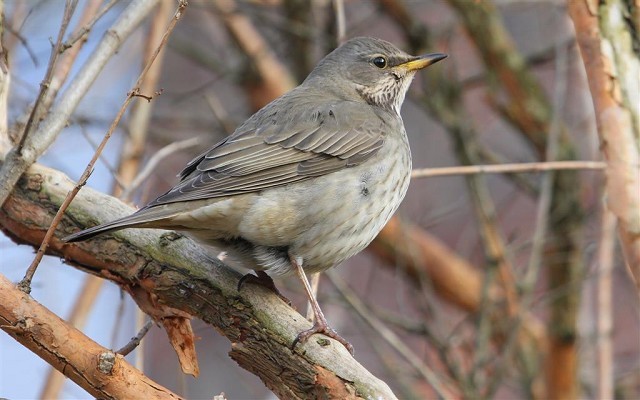 Last week's Grey Phalarope at Gibraltar Point (Lincolnshire) was still present on 23rd–24th and another was reported briefly at Titchwell (Norfolk) on 22nd. At least 24 Little Auks flew past Kincraig Point (Fife) on 23rd. 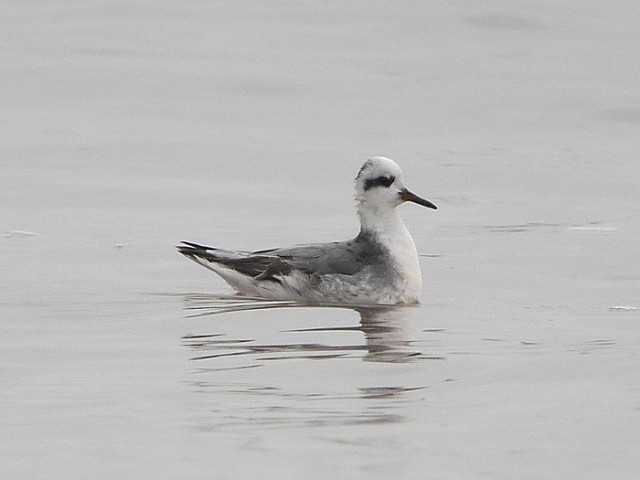 The three Glossy Ibis continued their winter sojourn at Catcott Lows (Somerset) this week, while one of at least 13 Great White Egrets remained at nearby Shapwick Heath. Others included "new" birds in Hertfordshire (near Chorleywood on 21st), Glamorgan (at St. Mellons from 22nd) and Warwickshire (near Rugby on 24th). Two birds remained around Northamptonshire and singles were noted in Hampshire, Wiltshire, Kent, Cambridgeshire, Lincolnshire, Staffordshire and Aberdeenshire. Two Cattle Egrets remained around Brew Farm near Sennen, with two more Cornish birds near Tresillian on 24th, while singles were at Powderham (Devon), near Chideock (Dorset), Stowmarket (Suffolk) and Killorglin (Co. Kerry) during the week. 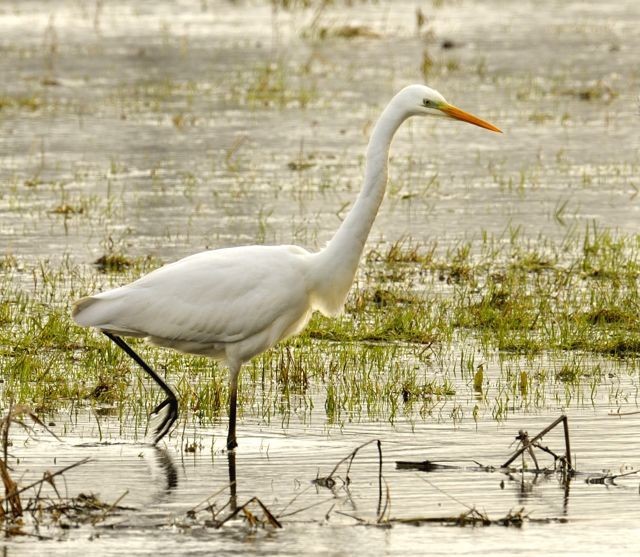 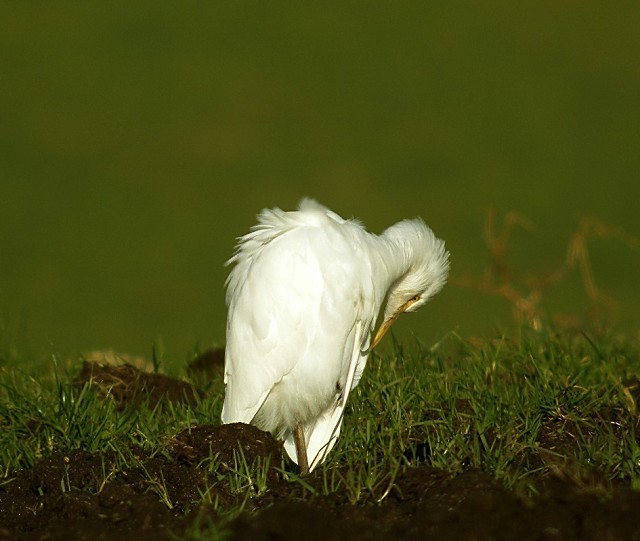 Multiple groups of Spoonbills loitered in all the usual hidey-holes of north Cornwall, north Devon and the south coast of Dorset this week (nine at Arne the highest score), with odd singles in all three of the aforementioned counties and at least two (up to four) still in Cork. As usual, Common Cranes were dotted around the Norfolk Broads; another was seen flying over Costessey near Norwich on 25th, while two were seen at Eldernell in Cambridgeshire on 24th.

The trio of Snow Geese (two blue, one white) were still in Aberdeenshire this week, seen at New Deer on 25th and Loch of Strathbeg on 26th. The lone white Snow Goose remained around the north Norfolk coast for much of the week, with further single white birds in Lincolnshire (flying over North Hykeham with Pink-footed Geese on 26th), Dumfries & Galloway, and Argyll. The Lancashire quartet were still at Leighton Moss to 26th, while another Blue Snow remained in County Donegal until 23rd at least. In Gloucestershire, the Todd's Canada Goose was still at Slimbridge from 21st–25th and a Canada Goose sp. was seen with Whooper Swans at Ardboe (Co. Tyrone) on 23rd. In Sligo, the Richardson's Canada Goose and its medium-sized mate were still present this week at Raghly on 23rd, and another Richardson's Canada was out on Tiree (Argyll) on 25th. 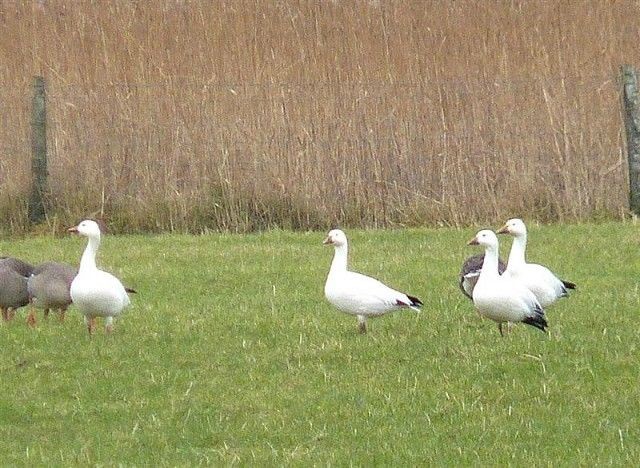 Three Black Brants were found at Old Hall Marshes (Essex) on 24th with two remaining on The Fleet (Dorset) to the same date. Earlier in the week, Black Brants were at Climping and Pagham Harbour (West Sussex) and, across the border, at Farlington Marshes (Hampshire), all on 21st. In County Cork, a Black Brant was seen at Glenmore on 23rd and near Cuskinny on 26th, and another was still in Waterford, at Ballyneety. Two reported Black Brants at Wells (Norfolk) may have been hybrids, although "proper" ones were at Wells and Burnham Overy on 24th. No such worries for the adult Red-breasted Goose found on Wallasea Island (Essex) on 23rd–25th (in the company of three Brent/Brant forms/sub-species/species), and in Devon the Red-breasted Goose was still around the Exe Estuary to 26th at least.

Nine drake Green-winged Teal included English singles in Lancashire (a new bird at Martin Mere), Leicestershire and Warwickshire, Scottish birds in Perth & Kinross, Moray and the Outer Hebrides, a Welsh bird still on Anglesey, and Ireland was represented by the regular bird in County Clare and a new arrival on the Rogerstown Estuary (Co. Dublin) on 23rd. Not far away, the regular female Blue-winged Teal was still on Bull Island, also on 23rd. In Dumfries & Galloway, the drake American Wigeon was back on Castle Loch from 22nd, and in County Mayo the drake Black Duck was still on Achill Island on 24th.

The drake Lesser Scaup was still at Cardiff Bay Wetlands (Glamorgan) to 24th and flip-flopped to Cosmeston Lakes on 25th. The second drake of the week was on Dozmary Pool (Cornwall) on 25th, although it seems to have been around for at least a week and a half before this. A drake Ring-necked Duck at Cowpen Bewley (Cleveland) on 23rd was the first in the county for almost three years. A further six Ring-necked Ducks were all leftovers from previous weeks: drakes at Porth Reservoir (Cornwall), Foxcote Reservoir (Buckinghamshire), Pugney's CP (West Yorkshire), Fleetwood and Thornton (Lancashire) and Inch Island Lake (Co. Donegal), while the female was still finding North Ronaldsay (Orkney) to her liking until 27th. 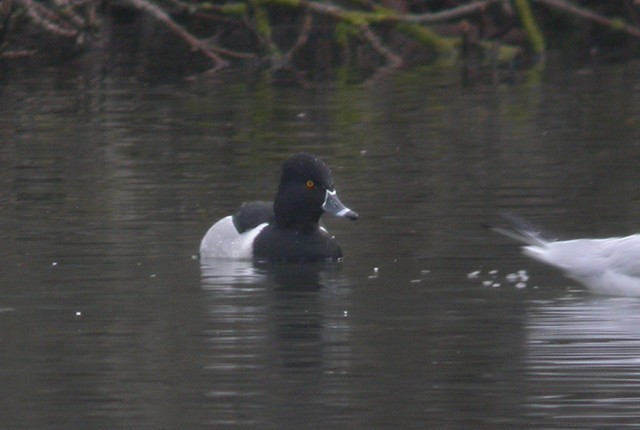 The female Surf Scoter was still at Dawlish Warren (Devon) for another week and two drakes were in Largo Bay (Fife) on 24th. The drake King Eider was still off Burghead (Moray) to 27th and the presumed dubious-origin female Hooded Merganser was still in Cleveland to 24th.

The dashing white Gyrfalcon was still showing well around Portnahaven on Islay (Argyll) until 22nd at least. A potentially wild White-tailed Eagle was reported flying over Devil's Bridge (Ceredigion) on 22nd (numerous released birds were at large in Scotland throughout the week). In Norfolk, the Rough-legged Buzzard was again over the Chedgrave Marshes on 21st–27th.

The week's only shorebird of note was the Spotted Sandpiper, seen again at Topsham (Devon) on 25th–27th.

On Anglesey, the adult Bonaparte's Gull was continuing to drop in to Lligwy Bay from 21st–27th. An adult Kumlien's Gull was seen at the Cotswold Water Park (Wiltshire) on 23rd and may well be the bird seen at Cricklade on 21st. Iceland Gulls included at least four around Orkney (out of a total for the week of around 16 birds), while Glaucous Gulls again outscored their smaller white-winged allies, with at least 20 birds noted including three birds in Staffordshire and two in London, Staffordshire and Cleveland. 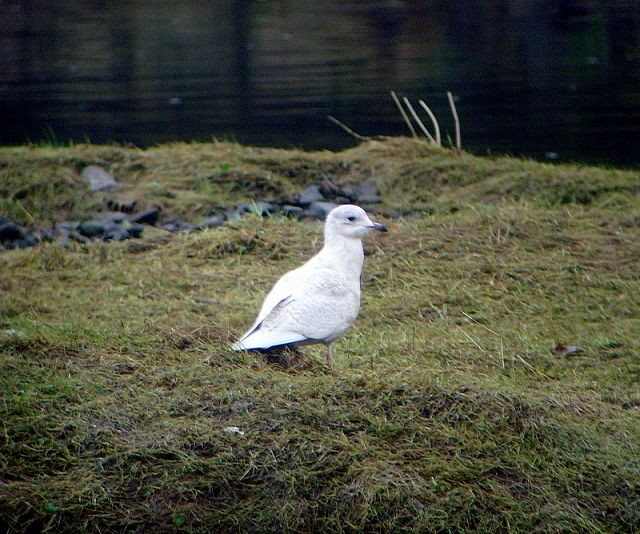 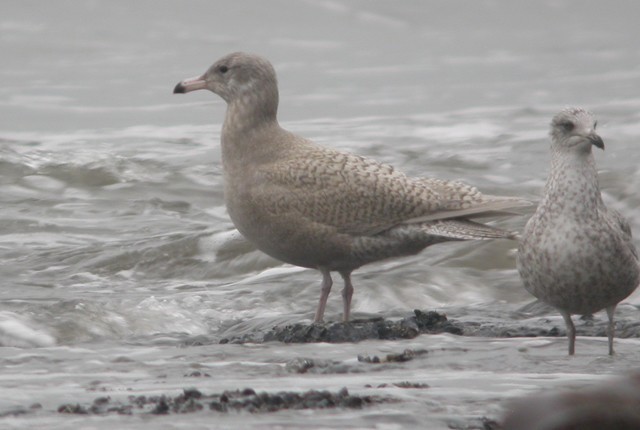 Caspian Gulls were again much in evidence this week, with perhaps as many as 36 birds recorded. Up to 13 birds have been seen around London, including six at Rainham Marshes on 23rd and four at Beddington SF the previous day. Four birds were seen at Wat Tyler CP (Essex) on 23rd and as many as seven have been seen recently around Appleford tip in Oxfordshire (where the Azorean Atlantic Gull still seems to be still residing from time to time). Up to five birds have been seen in Leicestershire during the week, including three at Shawell on 21st, but the big draw there (on the same day) was the adult Ring-billed Gull, the first in the county for almost four years and only the third since the start of the 2000s. The bird reappeared briefly on the morning of 22nd, but has failed to show since. Regular adult Ring-billed Gulls were in Hampshire, Essex and Argyll, while the second-winter was seen again at Strathclyde Loch (Clyde) on 23rd. Three birds (all adults) were noted in County Cork on 23rd, including two at Cuskinny Marsh, and three further adults were still at Nimmo's Pier (Co. Galway) on 24th, along with the adult Forster's Tern. Further Irish Ring-billed Gull were seen at Carrickfergus and Portrush (Co. Antrim), Lough Foyle (Co. Derry), Tralee (Co. Kerry), Lough Aderra (Co. Cork) and in Donegal town. 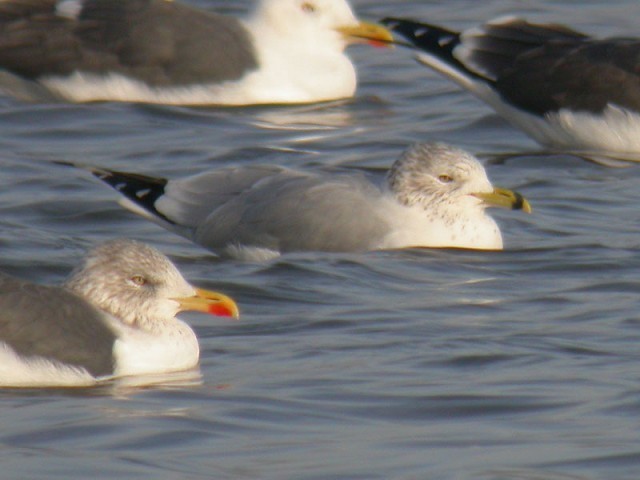 It was another poor week for Waxwing sightings with fewer than 20 birds seen (including ten reported at Caton in Lancashire on 24th and five at St. Abbs Head in the Borders on the same day). The number of Great Grey Shrikes stood at seven: the singing male was still at Holmsley Inclosure (Hampshire), with other regulars from recent days (and weeks) still at Bellever Tor (Devon), Pannell Valley (East Sussex), Grandborough (Warwickshire), the Teifi Marshes (Pembrokeshire) and Fenn's Moss (Clwyd). A new bird was seen on Exmoor (Somerset) on 26th. 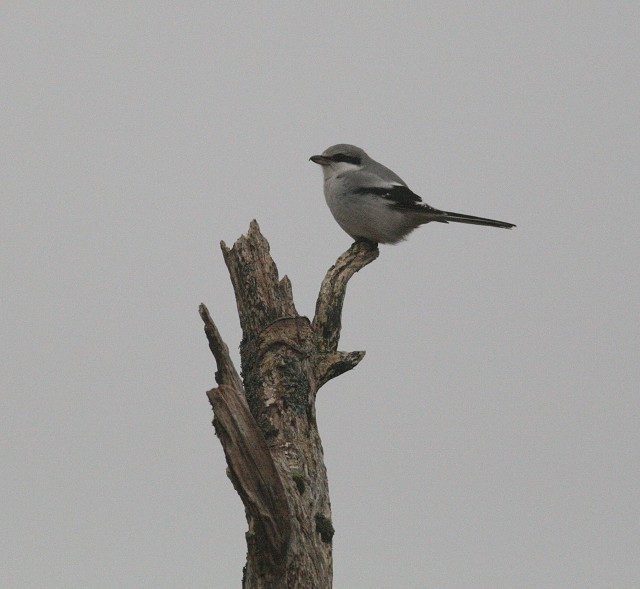 On Shetland, a Black-bellied Dipper was at Scalloway on 25th–27th, and down in Kent a Penduline Tit was again at Dungeness on 26th. In Oxfordshire, the first-winter Rose-coloured Starling was back (had it been away?) at Forest Hill from 21st (having last been reported on 14th December). Two Serins were at Rainham Marshes (London) until 23rd at least and the Little Bunting at Dunnet Bay (Highland) was still showing throughout the week. 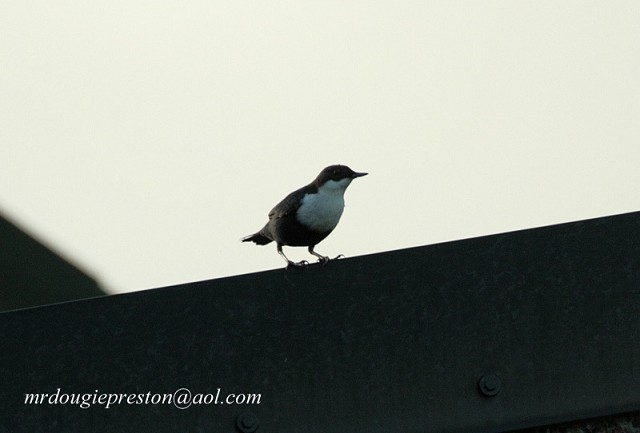 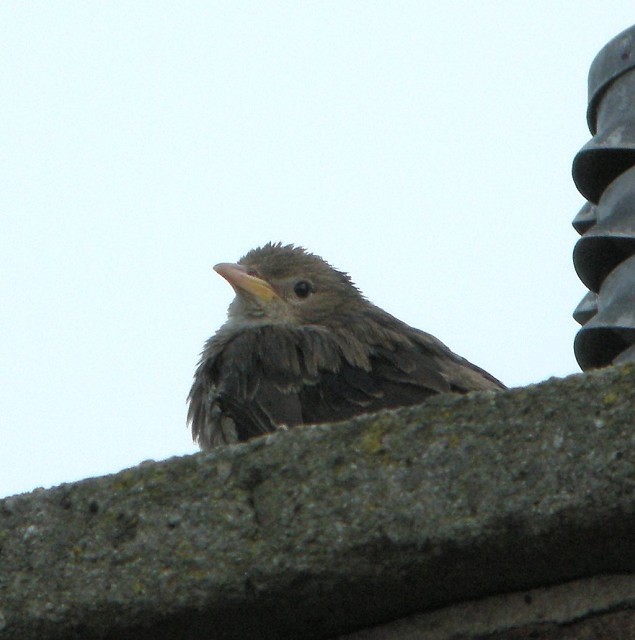 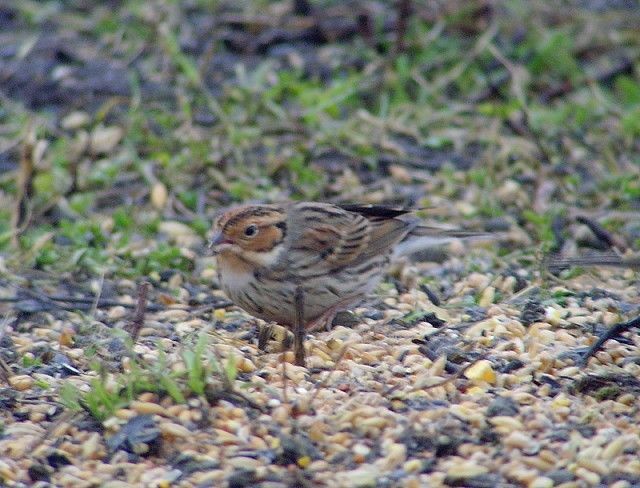 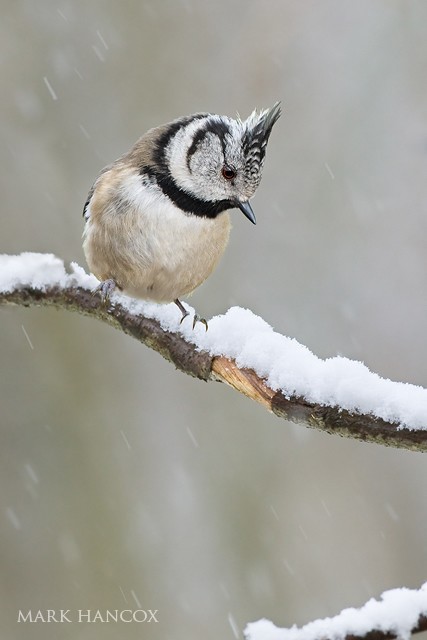 In the UK, the Crested Tit is limited in range to the pine forests of northern Scotland. From a trip to that area, Mark Hancox has sent us a couple of cracking wintry portraits of these delightful little birds. Our pick of these is a perfectly exposed shot of a bird on a snow-covered branch, crest raised and head cocked. The downward gaze of the bird, with its bill in line with the falling snow, make this work particularly well as a vertical format shot. Many photographers shy away from taking vertical compositions because they're unsure how to place the subject within the frame. This is a pity because this orientation works best with some scenes and, of course, magazines need portrait-format images for full-page and cover shots. A good technique for many vertical compositions is to centre the bird's eye horizontally, with the vertical position a third or a quarter of the way down the image. This can give the composition a natural, balanced look and is often more useful than the Rule of Thirds for portrait-format shots. 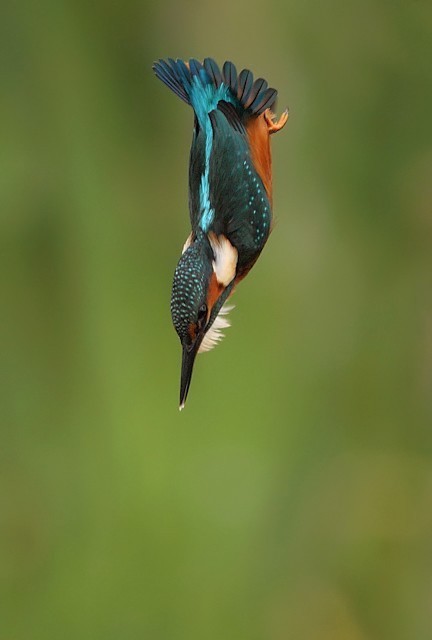 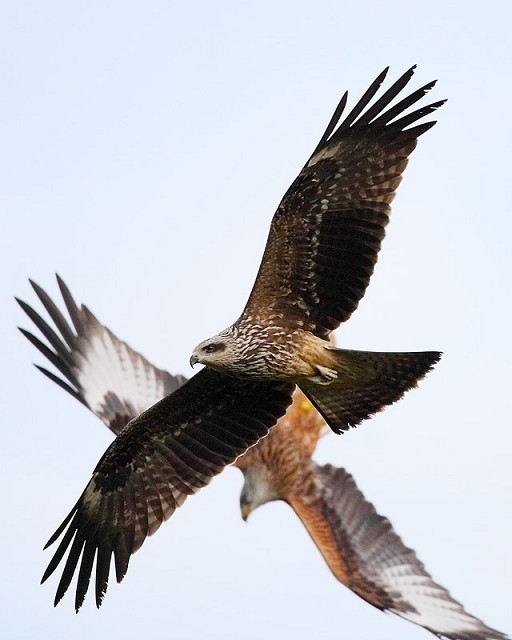 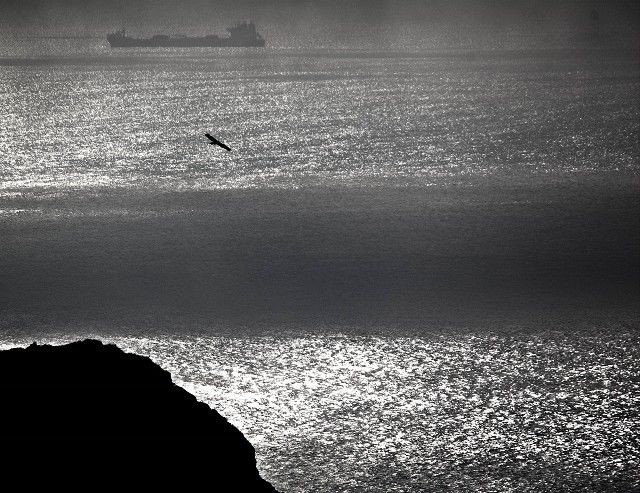 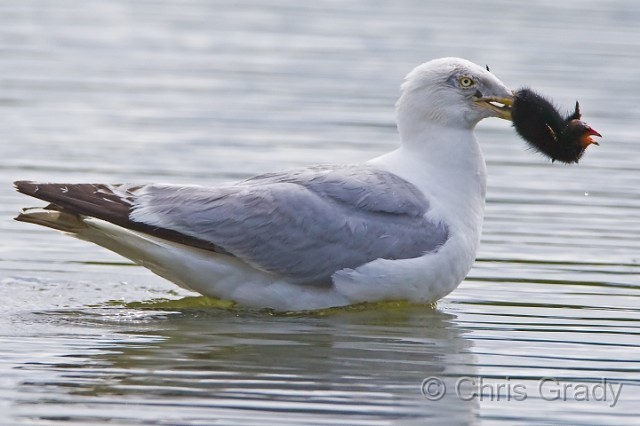 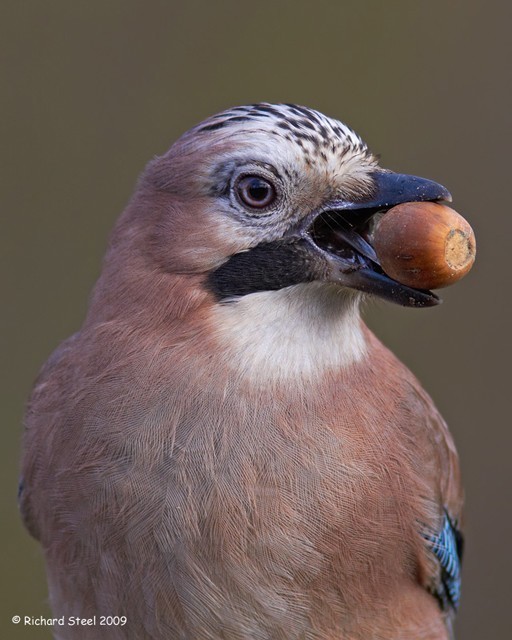 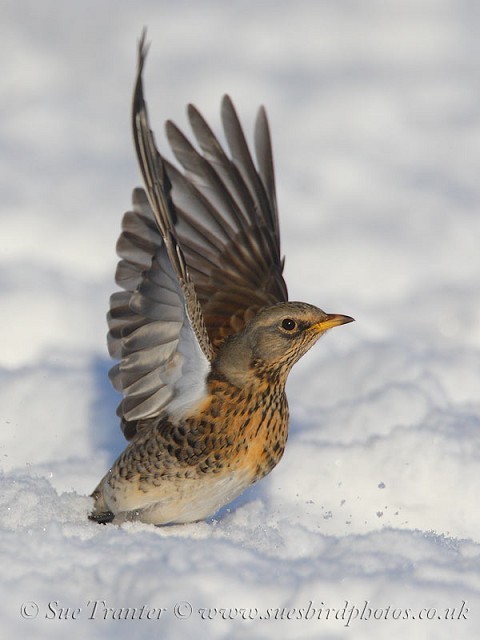 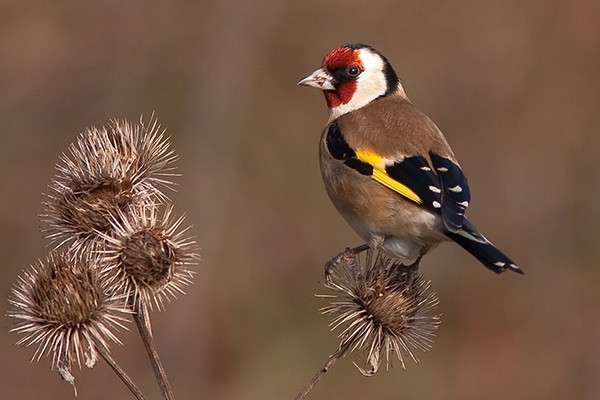 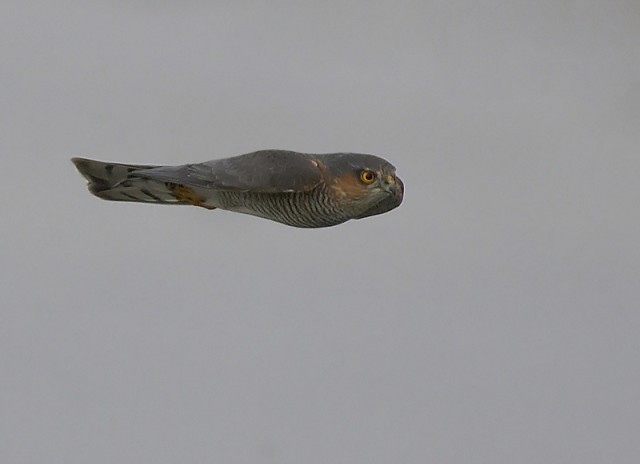 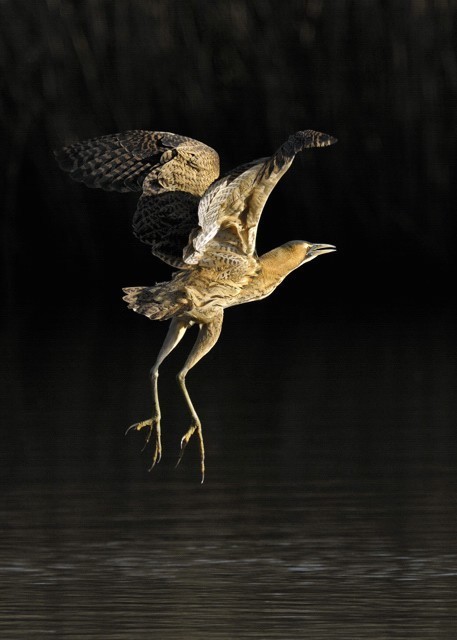 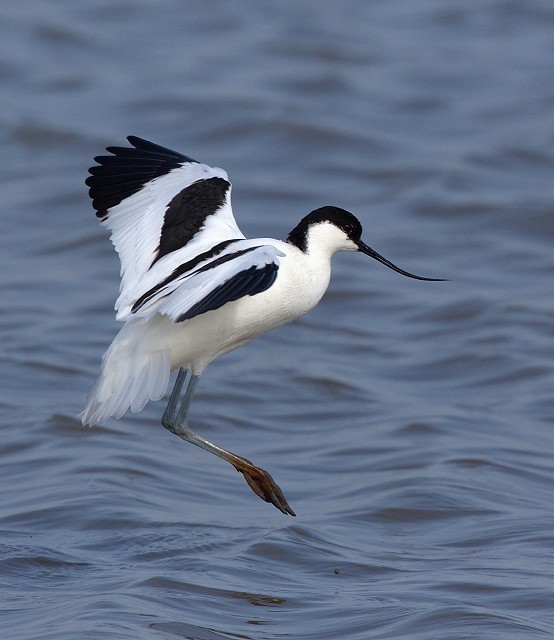 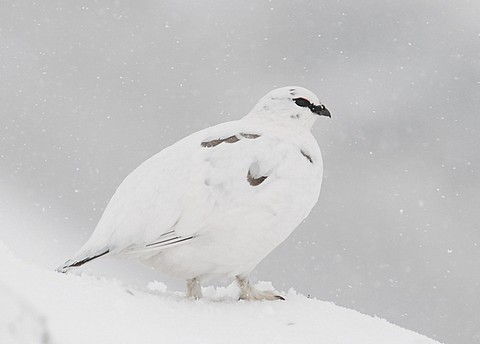 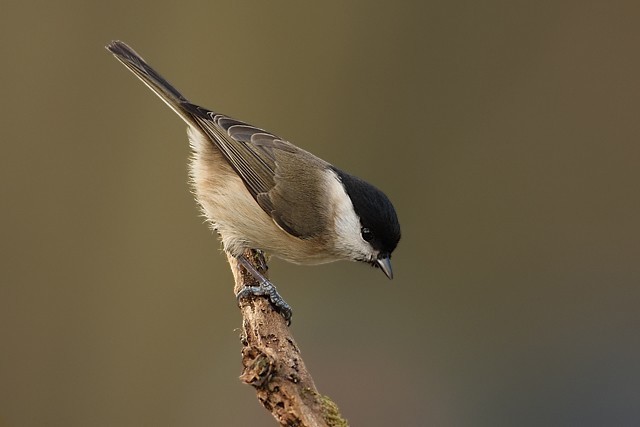 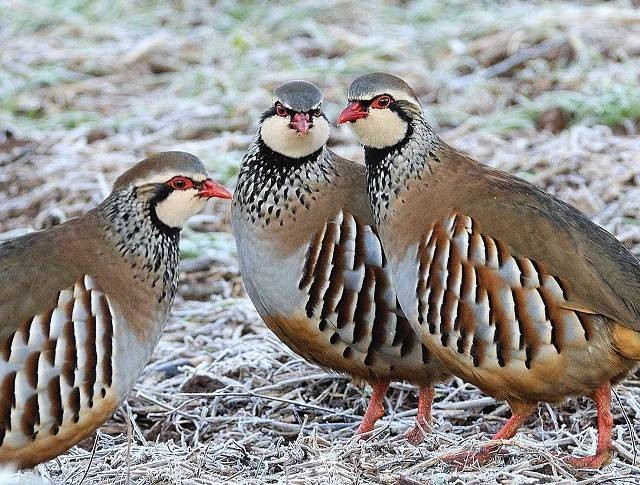