Raw north-easterly winds put spring on the back burner across much of the country, particularly in eastern counties, which struggled to produce even many Northern Wheatears and Sand Martins; but that's not to say that our coastline was utterly untenanted, with small groups of these two species breathing fresh life into certain headlands and lakes. A handful of Swallows and even the odd House Martin were also reported, along with several Ospreys, Little Ringed Plovers and Garganey, so the promise is indeed there. With the winds due to adopt a more auspicious southerly aspect during the next review period, we can surely await improved volume and variety.

Not surprisingly, considering the glaring lack of favourable conditions, the rarity front was largely unmoved. Old faithfuls such as the adult Glaucous-winged Gull in the harbour at Castletown Bearhaven, Co Cork, kept popping up on the news page, as did the Pacific Diver when it resurfaced off Marazion, Cornwall, from 16-20th, although it will doubtless quietly slope off within the next few weeks. The drake Black Scoter off Rossbeigh, Co Kerry, was also riding the waves again, being reported on 18th and 19th. The White-billed Diver season continued to brew gently, with three new birds in Scotland comprising two off Sandend, Aberdeenshire, on 16th, with one still there on 18th, and another at Burghead, Moray and Nairn, on 18th; the bird at Port Skigersta on Lewis in the Outer Hebrides was noted on 19th. The big counts are just around the corner. 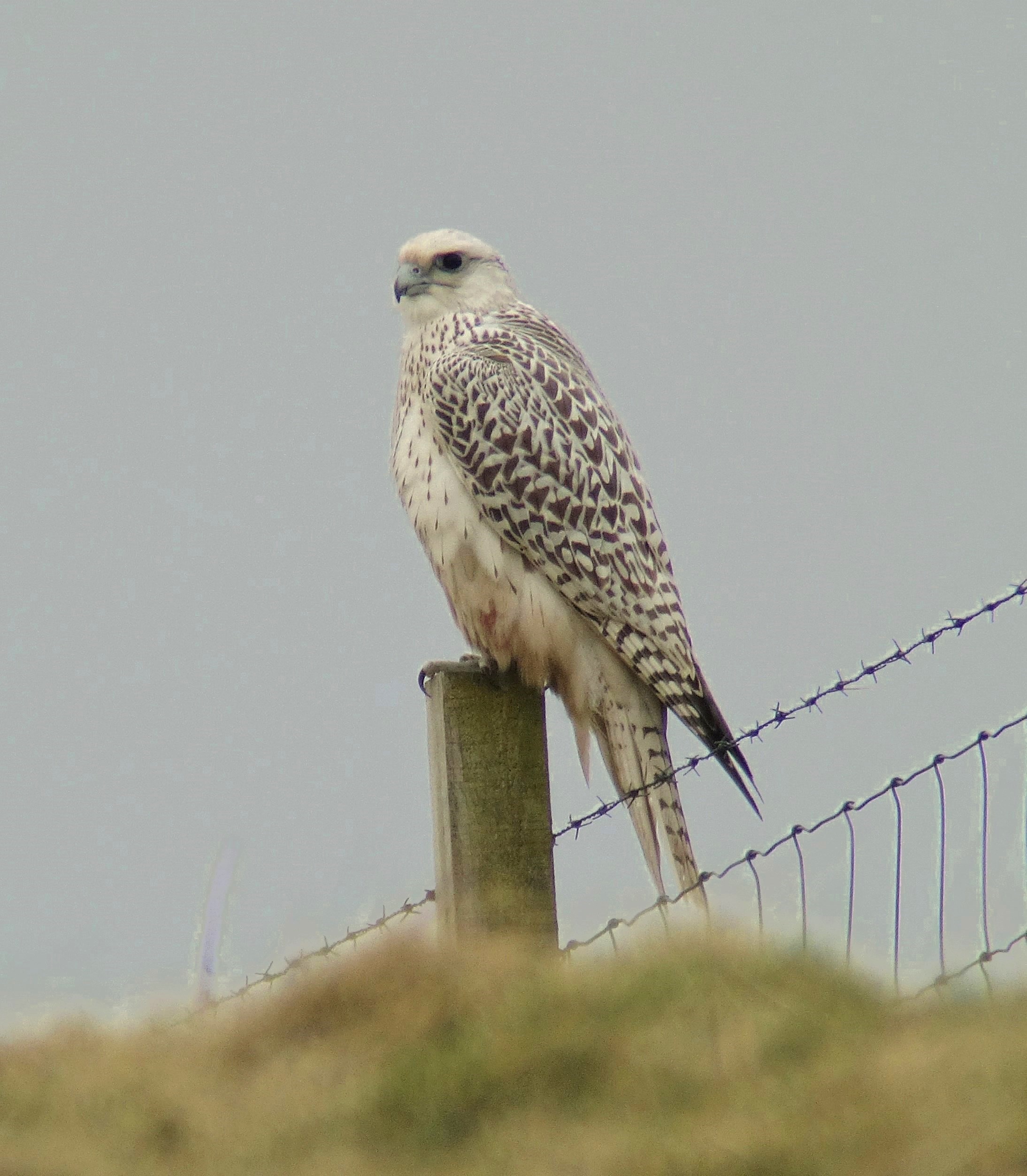 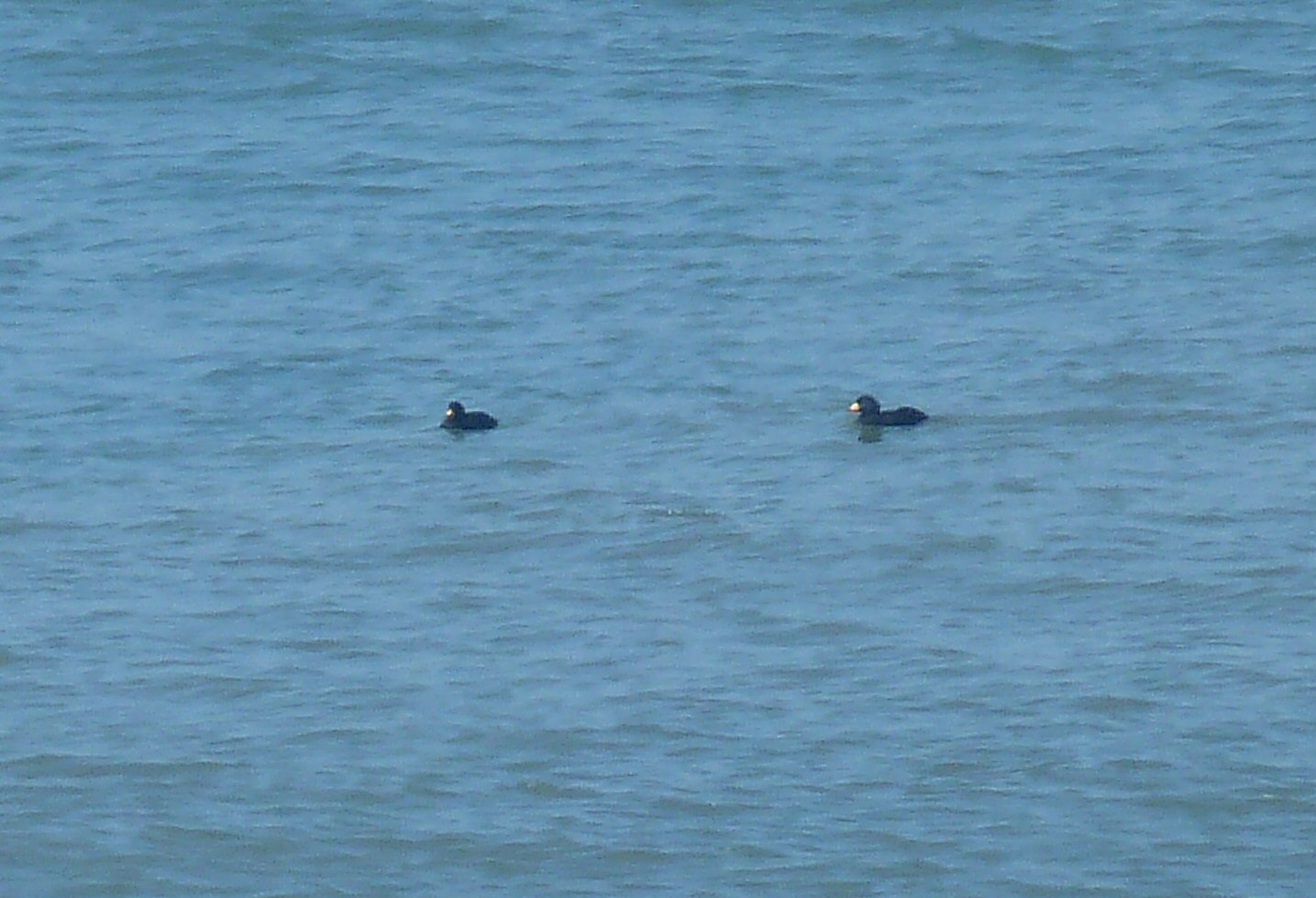 The thoroughly magnificent white-morph Gyr Falcon kept roaming around the top end of North Uist to 22nd, proving irresistible to a few who travelled to savour this rather predictable (as Gyrs go) individual. Wintering Rough-legged Buzzards survived at Holland Haven CP in Essex, Sullom in Shetland, and Thornham and Haddiscoe Island (both Norfolk). Originally identified as a Common Crane, Cumbria lent us all a tasty topic for in-field natter as a Demoiselle Crane floated around Mockertin Tarn from 16-20th, before relocating to the outskirts of Cockermouth on 21st. Although this species has made a relatively convincing attempt at breaking onto the British list in the past, and a wild bird is a slim general possibility in Britain, the lack of any plastic on its legs ultimately does little to mitigate this individual's chances, with suspicious damage to its primaries and unfavourable timing and circumstances. 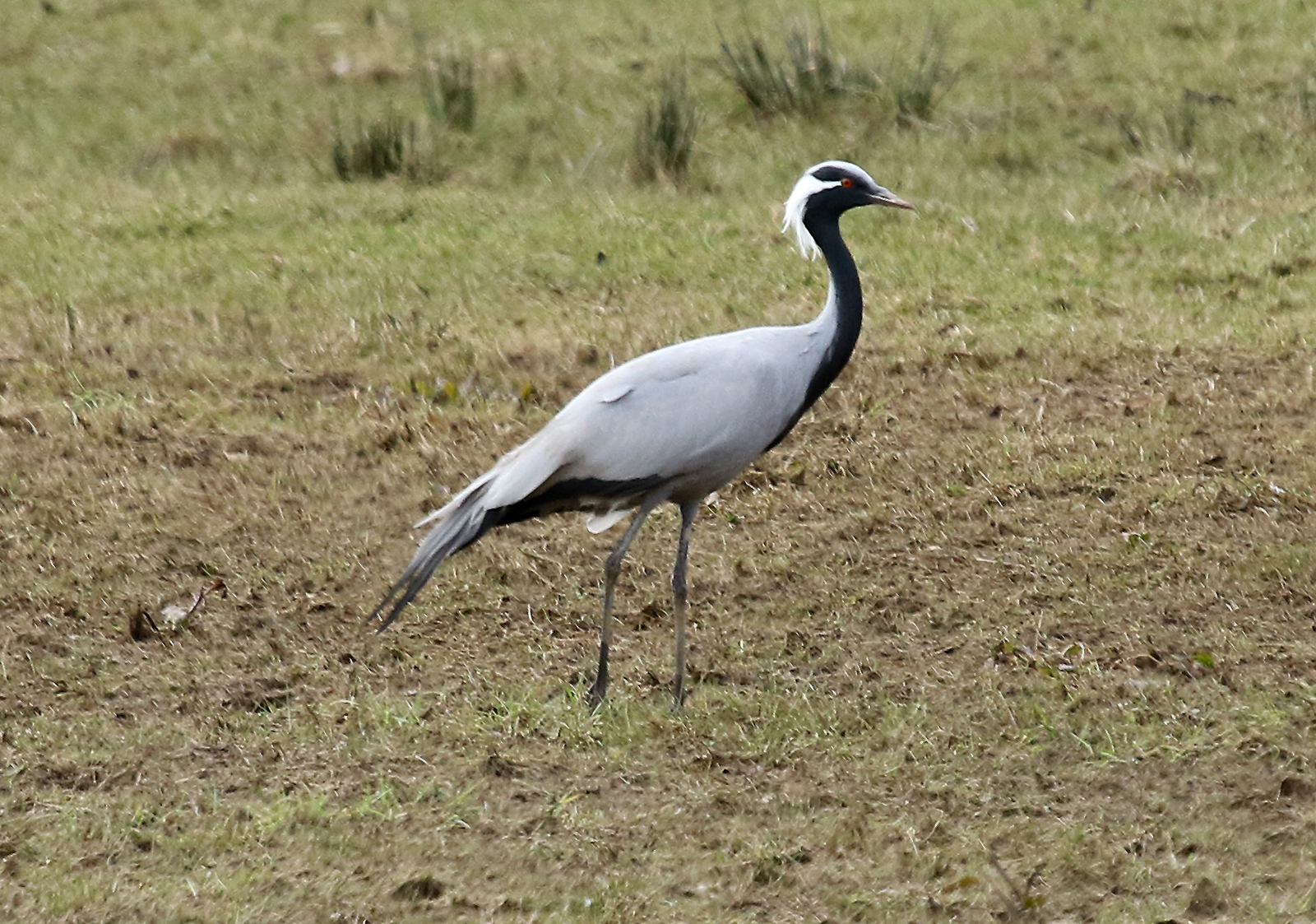 A northbound European Serin over Landguard NR, Suffolk, on 20th intimated the potential overshoots to come, given the necessary weather. The same could be said about the Hoopoe apparently photographed near Ullapool, Highland, on 19th, with the immovable Staffordshire bird still there on 22nd. In Dorset the spritely Pallas's Warbler kept itself busy between Portesham and Abbotsbury to 22nd and Yellow-browed Warbler reports came from the Isle of Wight and three sites in Cornwall. We sent out updates on a total of 20 Great Grey Shrikes over the week, and the Northern Long-tailed Tit was sighted at Sandwich Bay, Kent, again. News of Flamborough's two wintering Richard's Pipits came through to 22nd, as well as confirmation of the presence of the Kent bird on the Isle of Sheppey on 20th. 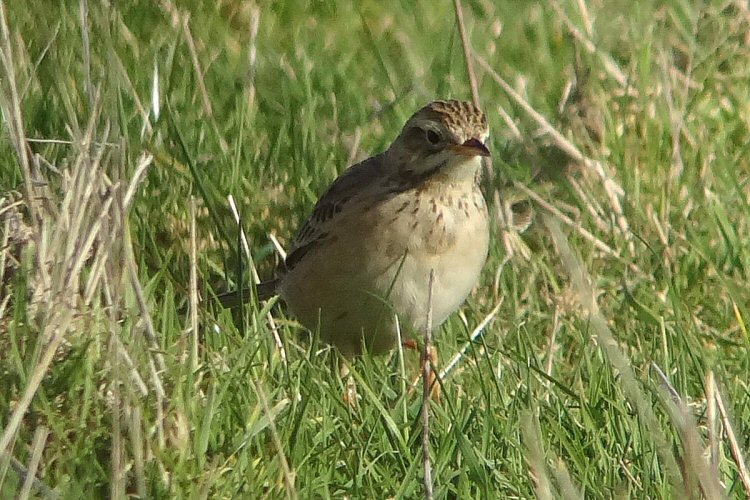 Surrey's elusive Little Bunting appeared at Pyrford again on 21st, and was showing on 22nd, but has been playing hard to get. The braces of Penduline Tits have been glued to Saltholme in Cleveland to 22nd and Gloucester to at least 20th, while slyer singletons were still at Magnolia NR, Essex, on 17th and again at Strumpshaw Fen, Norfolk, on 21st. The three Long-billed Dowitchers were similarly attached to their wintering sites, probing away at Pennington Marshes, Hampshire, to 17th, and both Cresswell Pond, Northumberland, and Rutland Water to 22nd. 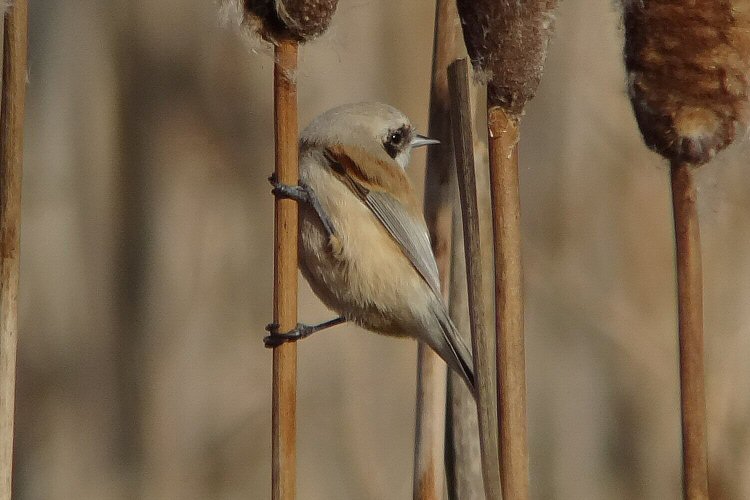 Once again it was wildfowl that kept things ticking over this week, the odd newbie being picked out alongside the regular line-up of recent weeks as some geese and ducks began to migrate. In County Sligo, Ballyconnell continued to accommodate both Richardson's Cackling Goose and Todd's Canada Goose to 19th, while lone Black Brants clung on in Devon, Essex, Hampshire and Norfolk, not to mention the duo in East Yorkshire. Ballyconnell also kept its adult drake King Eider to at least 20th, when the extended reign of the 'Queen' at Rosslare Backstrand, Co Wexford, was also reported. Nine American Wigeon and 19 Green-winged Teal included one and four fresh finds respectively. Drake Ring-necked Ducks were still at Ham Wall, Somerset, on 22nd, Knockaderry Lake, Co Waterford, on 21st, Loch o' th' Lowes, Ayrshire, on 20th and Milton Loch, Dumfries and Galloway, on 19th; a new drake turned up at Chasewater, Staffordshire, on 21st. 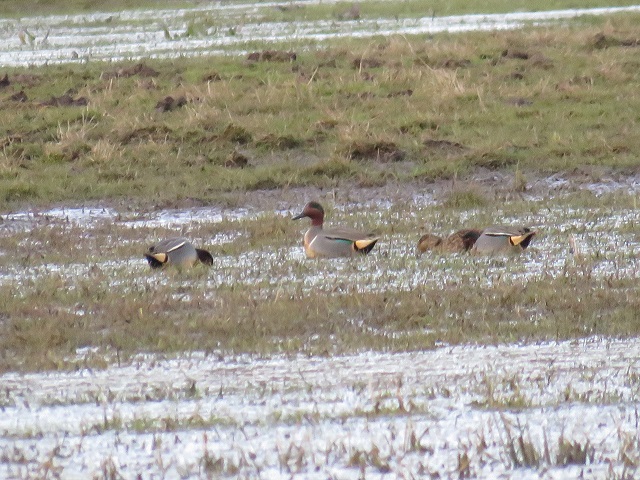 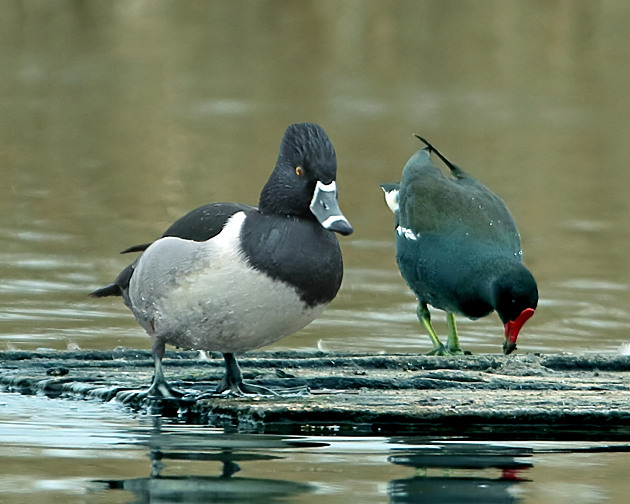 Drake Surf Scoters remained at Filey in North Yorkshire, Musselburgh in Lothian, Ruddon's Point in Fife, Gowlane in Co Kerry, and Ballyvaughan in Co Clare, not to mention the Scilly drake being refound off St Mary's, but a count of five together in Blacksod Bay, Co Mayo, on the evening of 20th certainly caught the eye, and raises the question as to what may be lurking amid scoter rafts away from popular areas. The adult drake Lesser Scaup were quite at home in Glamorgan and Cornwall, and a new drake was picked out on Lough Skean, Co Sligo, on 18th, and still there the next day. The curious fully-winged Ferruginous Duck showed little sign of leaving Washington WWT, its presence confirmed again on 17th.

Glossy Ibises were shared between Derbyshire, Devon, East Yorkshire, Essex, Gwent, Shropshire, Ceredigion, Co Cork and Co Wexford (where two were still at Cahore and a single was at Tacumshin). In Suffolk, North Cove's Cattle Egret went on plodding about the cattle fields to 21st, when a new individual flew east past Hurlstone Point, Somerset; the previous day, the bird seen in Kent in February reappeared near Hareplain and was still there on 21st. A White Stork report emerged from Brading Marshes, Isle of Wight, on 17th: perhaps a genuine overshoot this time?

One of the longest standing of all long-stayers, or at least returners, the adult Forster's Tern, graced Nimmo's Pier, Co Galway, to at least 19th. Co Carlow enjoyed a potential addition to its county list when an adult Bonaparte's Gull was identified at Kildavin on 18th. In Devon, the adult popped up on the Exe Estuary again on 19th and 20th but the return of the Buckinghamshire adult in the evening gatherings at Calvert Lakes on 17th, more than two months since it last roosted at College Lake, was more intruiging. Overall, though, there were lean pickings for gull-watchers: 14 Ring-billed Gulls were on offer (nine of which were in Ireland, including four in Co Cork), the only Kumlien's Gulls were in North Yorkshire and in Moray and Nairn, and the supply of white-wingers and Caspian Gulls seemed insubstantial. 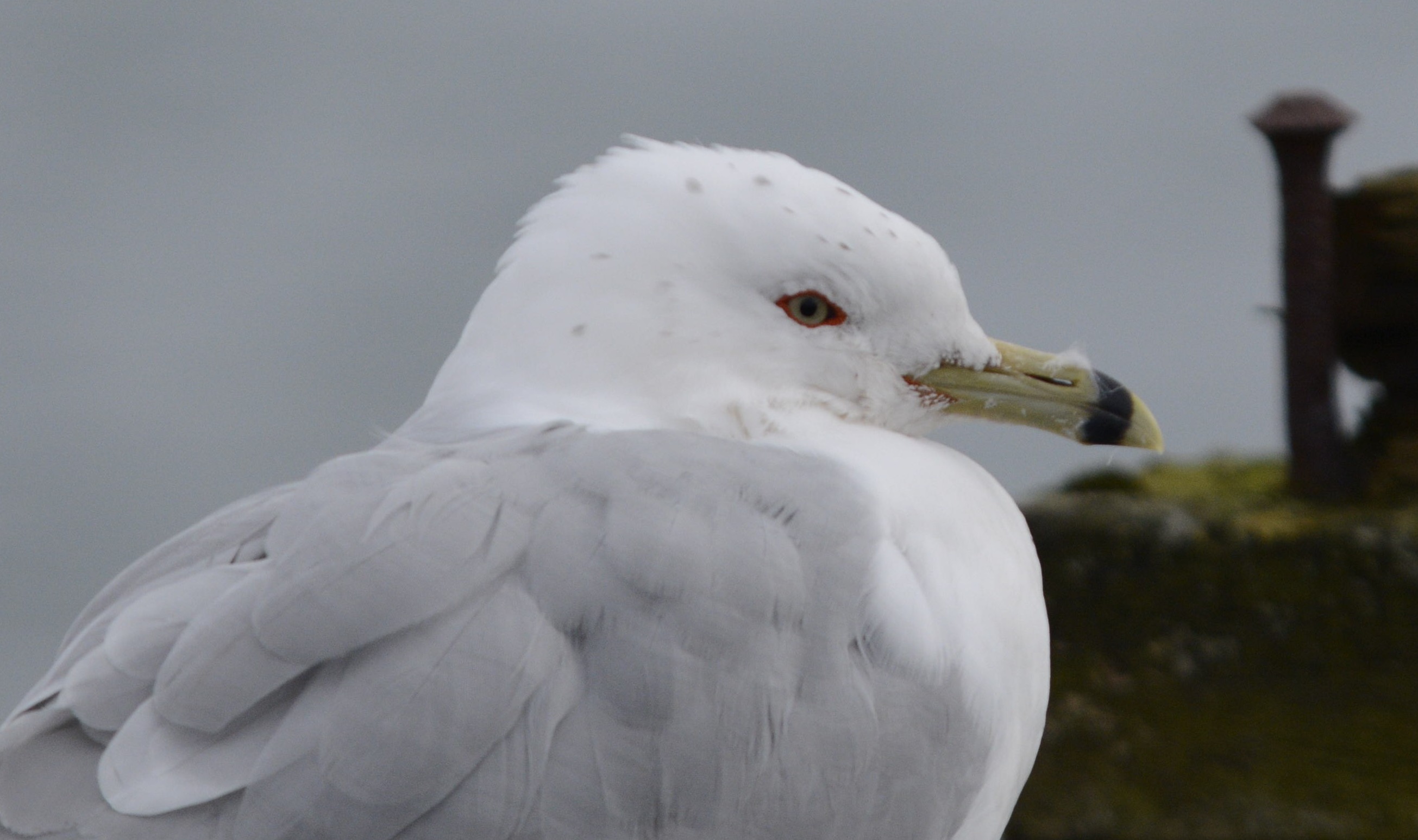 Following the at-once fortuitous and tragic discovery of a Golden Nightjar as it crashed into a birder's car bonnet in May last year, further food for speculation as to the species' true status in the region came with eye-catching news of four in the same area of Western Sahara, by the road at Aousserd, on 20th. It will be fascinating to learn more about this apparent population, as we hope that further sightings will shed more light. The Netherlands' popular Siberian Rubythroat carried on strutting around Hoogwoud, Noord-Holland, to 22nd, when a Red-flanked Bluetail was discovered on the island of Neuwerk, off the German coast near Hamburg. In Israel, the Oriental Honey-buzzard continued to cruise around Eilat, and the Bateleur was reported from Gal'on again on 29th. 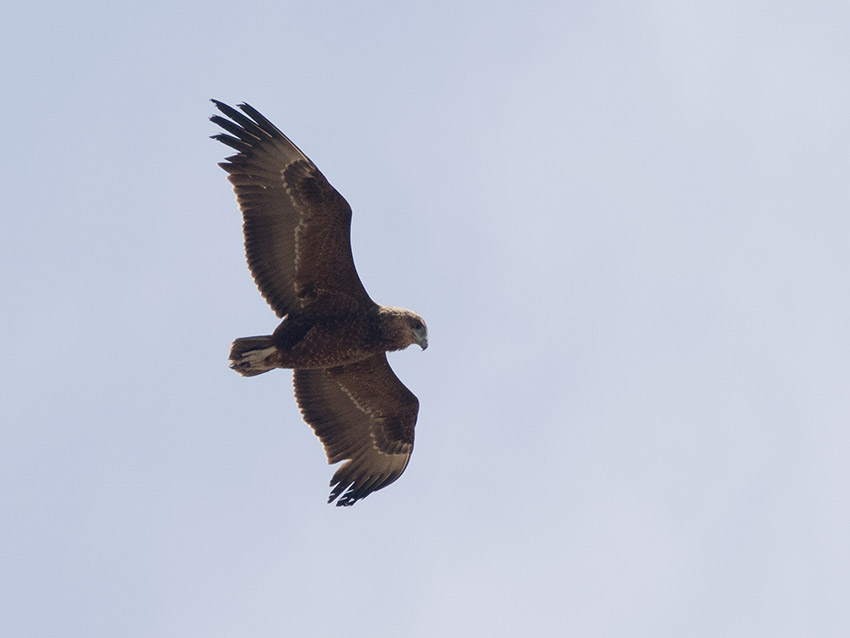 Long-stayers included the adult drake Stejneger's Scoter at Tautra to 20th and Oriental Turtle Dove at Espeland to 17th (both Norway), Black Heron on Santiago, Cape Verde, and Thayer's Gull at Xove, Galicia, Spain, both to 20th. A Double-crested Cormorant remained on São Miguel, Azores, on 16th.