Despite there being plenty of early-autumn migrant interest this week, the only notable megas were long-stayers: the drake Black Scoter was off Murcar (Aberdeenshire) all week and the House Crow was in Cobh (Cork) on 11th. Also of note, though, were a couple of interesting probables. With near-permanent sea-watching presence at Porthgwarra (Cornwall), we can expect to see some exciting seabird records, and a probable Yelkouan Shearwater on 16th was a case in point. There was then a belated report of a probable Sooty Tern off Kessingland (Suffolk) on the evening of 10th, with the identification seemingly firming up overnight.

There was just one report of Ruddy Shelduck this week, one at Abberton Reservoir (Essex) all week. There was also a further report of a drake Black Duck at Achill Island (Mayo) on 14th, in the company of at least one hybrid. Both of last week's Ferruginous Ducks remained, at Minsmere (Suffolk) to 12th and Blagdon Lake (Somerset) all week.

The eclipse drake Blue-winged Teal originally only seen in flight at Saltholme (Cleveland) was relocated on 13th and, as a moulting bird, was typically elusive until 15th. There was another eclipse drake, at Thursley Common (Surrey) on 17th; this will have been a welcome addition to many county lists, being just the second for the county, following one at Barn Elms in February 1981 (there was a further record of a female at Frensham Great Pond in 1989, although this was thought to have been an escape). Also from the west, a single eclipse drake Ring-necked Duck was again at Carrowmore Loch (Mayo) on 13th. A single drake Surf Scoter remained in Lunan Bay (Angus & Dundee) to 13th and up to three were with the large moulting scoter flock off Murcar (Aberdeenshire).

Seawatching conditions were again far from ideal in the west, with a consequent reduction in records. There was just a single Cory's Shearwater off Porthgwarra (Cornwall) on 11th, along with a single Great Shearwater, 20 Balearic Shearwaters and 11 Sooty Shearwaters. There were further Great Shearwaters off Start Point (Devon) on 11th, past Cape Clear (Cork) on 11th and 12th and they were also regular off the Scilly pelagic, with records from four days this week, including four on 11th. The pelagics also saw two Wilson's Storm-petrels on 12th, up to two adult Sabine's Gulls and a Grey Phalarope on 14th. Numbers of Balearic Shearwaters continued to increase, with peak counts reported of 66 past Berry Head (Devon) on 16th and 45 past Porthgwarra (Cornwall) on 13th. Further north, one was feeding off Stevenston Point (Ayrshire) on 16th. 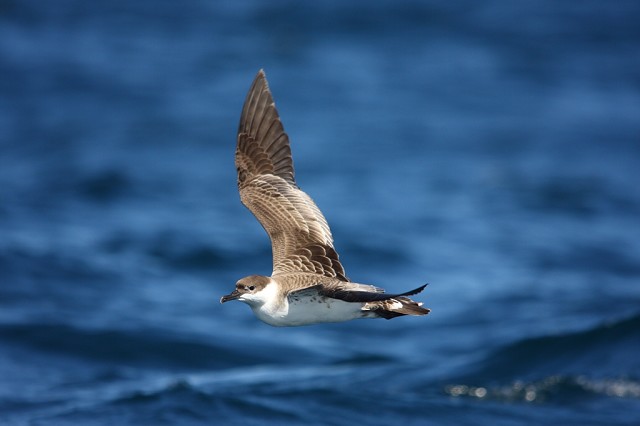 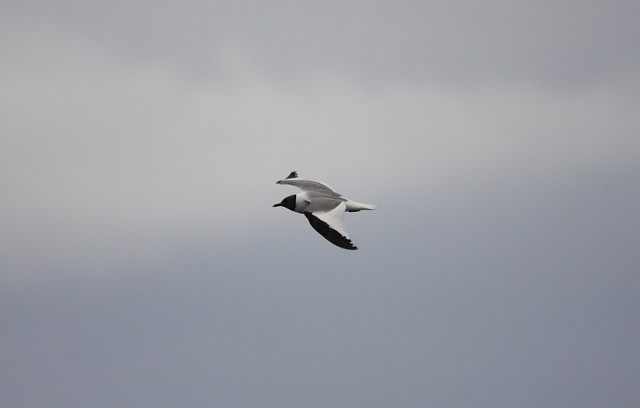 In Kent, the immature Purple Heron remained at Elmley Marshes all week, with another at Dungeness on 16th. Elsewhere, a juvenile was at Benacre (Suffolk) on 16th–17th and a possible was seen briefly at Attenborough (Notts) on 13th. There was just a single White Stork, over Upware (Cambs) on 14th. Regular Great White Egrets were again reported from Dungeness (Kent) and Shapwick Heath and Meare Heath (Somerset), with others over the Hayle estuary (Cornwall) and at the National Wetlands Centre (Carmarthenshire) on 11th, at Llangennech (Carmarthenshire) on 11th–17th and over Hauxley (Northumberland) on 14th. The adult and juvenile Cattle Egret continued to commute between Canvey Island and Two Tree Island (Essex) all week and singletons were at Thorney Island (West Sussex) on 14th–17th, Newport Wetlands (Gwent) on 15th and St Ouen's Pond and St Brelade (Jersey) on 16th–17th. Spoonbills were at all of their usual haunts this week, with peaks of 16 at Cley Marshes (Norfolk) and 12 at Havergate Island (Suffolk); two remained at Montrose Basin (Angus & Dundee). 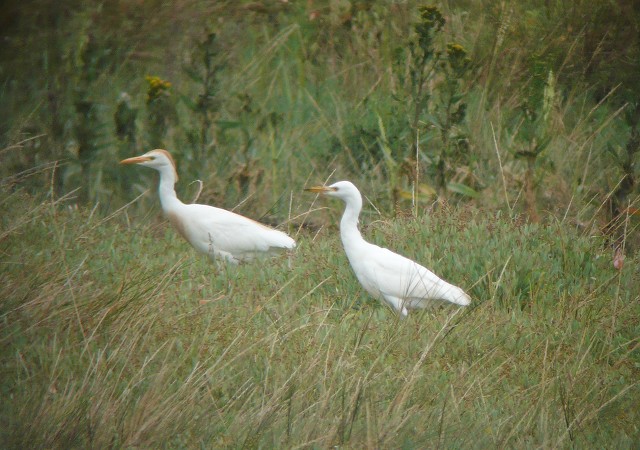 With the apparent departure of the Lincolnshire White-tailed Eagle, the only report was a rather unusual one of an adult over Chichester (West Sussex) on 17th. In Cornwall, the Black Kite wandered widely around the Land's End peninsula all week, and another was on St Mary's (Scilly) on 16th–17th. One also remained at Kennerleigh (Devon) to at least 15th, with another possible in Devon, at Yelverton, on 12th; another drifted north over Strumpshaw Fen (Norfolk) on 15th. The raptor highlight of the week wasn't very accessible, though: a juvenile Pallid Harrier on Fair Isle (Shetland) on 12th–15th was the second record for the island, following the first, also the first for Britain, in spring 1931. Not quite as notable was the Montagu's Harrier that remained at Tacumshin (Wexford) all week. 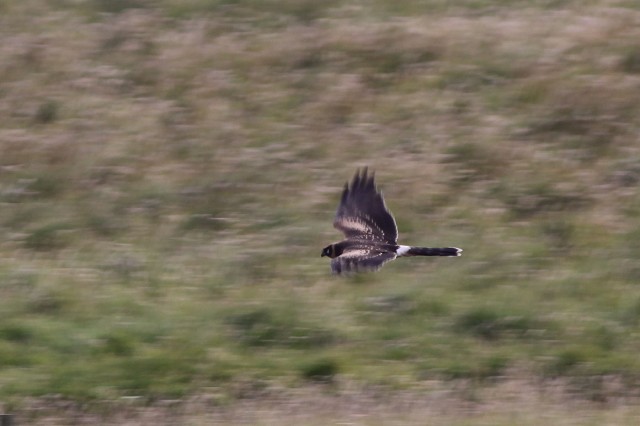 In Ireland, the adult American Golden Plover remained at Doonbeg (Clare) to 16th, and a first-summer was at Inveran (Galway) on 15th. There was also a possible 'Lesser Golden Plover' at St Mary's (Orkney) on 12th. There were two new Wilson's Phalaropes this week, birds at Belfast Lough (Antrim) on 14th–17th (the first in the county since 1991) and at Greatham Creek, Seal Sands and Greenabella Marsh (Cleveland) on 13th–14th. 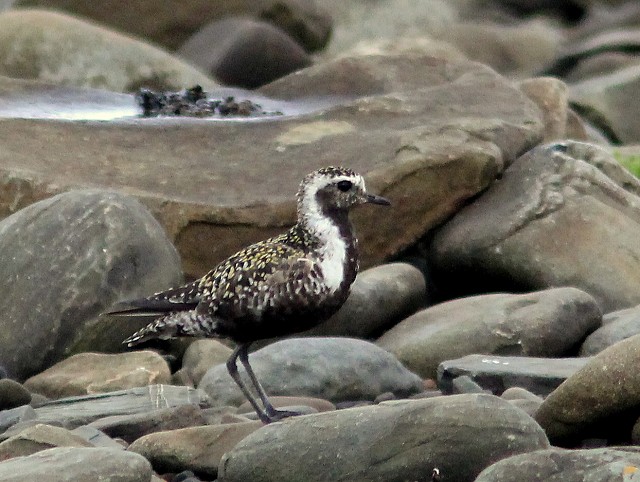 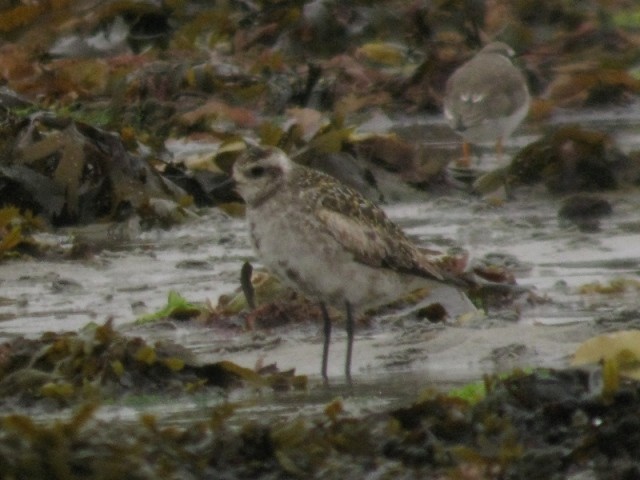 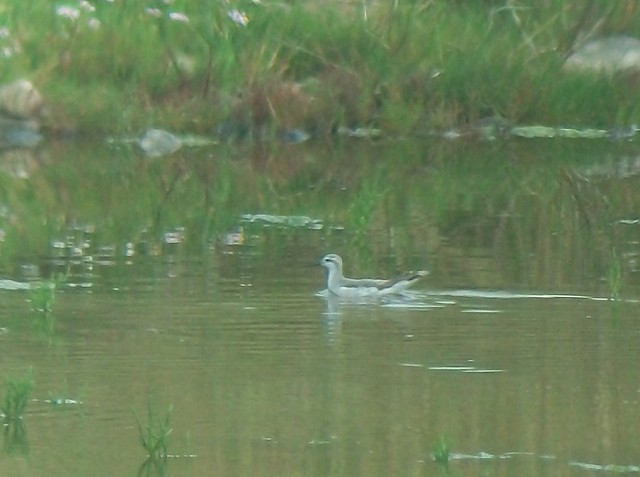 Back in Ireland, the adult Semipalmated Sandpiper remained at Ventry (Kerry) to 13th. The only Temminck's Stints were at Newstead & Annesley (Notts) on 13th and at Toft Newton Reservoir (Lincs) on 14th–16th. The excellent run of White-rumped Sandpipers continued, mostly involving adult birds. In Ireland, one at Tacumshin (Wexford) on 15th may have been the same as at Lady's Island Lake on 16th–17th, and there was another adult at Shannon (Clare) on 16th. This side of the Irish Sea, an adult was at Dungeness (Kent) on 14th, and one at Snettisham (Norfolk) all week was joined by a second bird on 14th. Such multiple occurrences aren't that unusual, with records of up to four birds together seen every few years, although this normally occurs in the Northern Isles or Ireland. 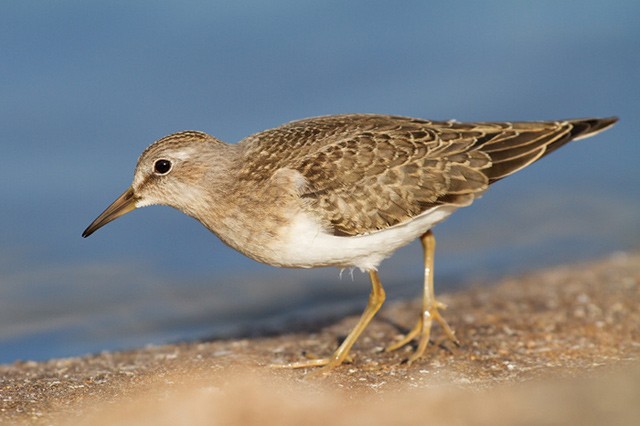 Interestingly, there were fewer Pectoral Sandpipers; birds were at Freiston Shore (Lincs) on 14th, Cley Marshes (Norfolk) on 14th and south past Spurn (East Yorks) on 15th. In Wexford, birds also remained at Tacumshin and Lady's Island Lake on 17th. There were two Buff-breasted Sandpipers, one on North Ronaldsay (Orkney) on 11th–13th and one reported briefly from Horse Shoe Point (Lincs) on 14th. 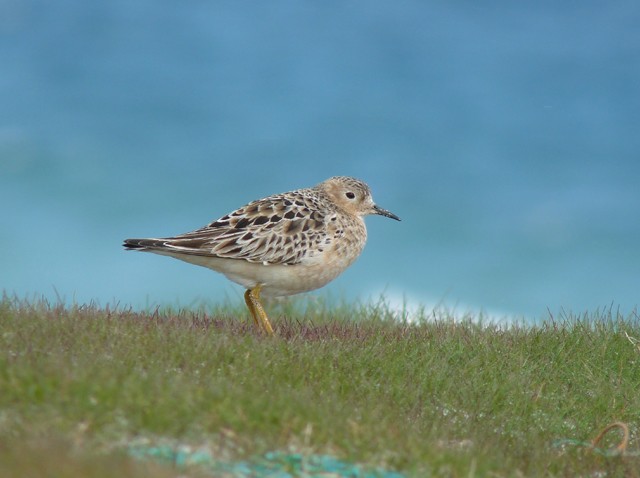 There was an unusual report of a juvenile Long-tailed Skua on moorland at Barningham (Durham) during the week, and just one other report, of a bird past Whitburn Coastal Park (Durham) on 13th. The regular Glaucous Gulls remained at both Dungeness (Kent) and Budleigh Salterton (Devon), and the only other report was of an immature in fields at Whitburn (Durham) on 11th. There was just one report of Iceland Gull again, a third-summer at Fail Loch (Ayrshire) briefly on 12th, and one Ring-billed Gull, at Ballycastle (Antrim) again on 16th. Last week's adult Bonaparte's Gull continued to commute between Whitburn, Seaburn and Sunderland (Durham) all week and there were further adults, both possibly long-stayers reappearing, at Mealabost, Lewis (Outer Hebrides) on 14th–16th and Dornoch (Highland) on 14th–15th. 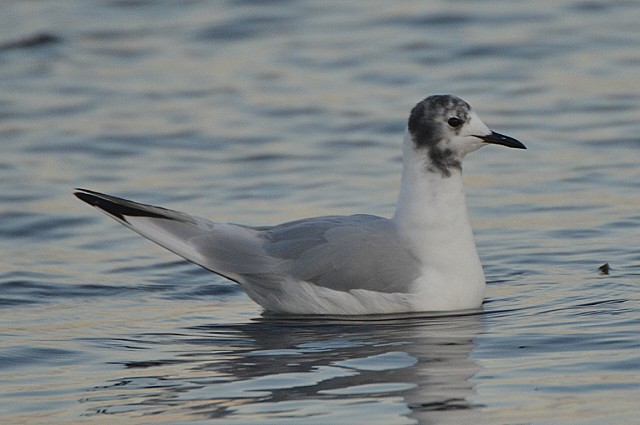 Despite the reduction in general seabird passage, records of Sabine's Gull increased, with most in Ireland. Three went past Bridges of Ross (Clare) on 13th, with another on 16th, two passed Malin Head (Donegal) on 11th and a singleton was off Carnsore Point (Wexford) on 13th. Elsewhere, an immature passed Hauxley (Northumberland) on 11th, an adult and a first-summer were in Staffin Bay, Skye (Highland) on 17th and two flew south past Spurn (East Yorks) on 17th.

There was a welcome return to more White-winged Black Terns: a juvenile was at Grafham Water (Cambs) on 11th–17th and an adult at Nosterfield Quarry (North Yorks) on 15th–17th. 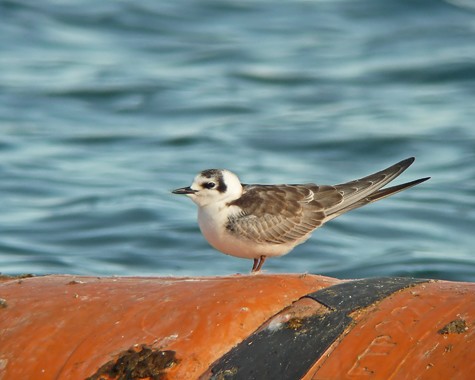 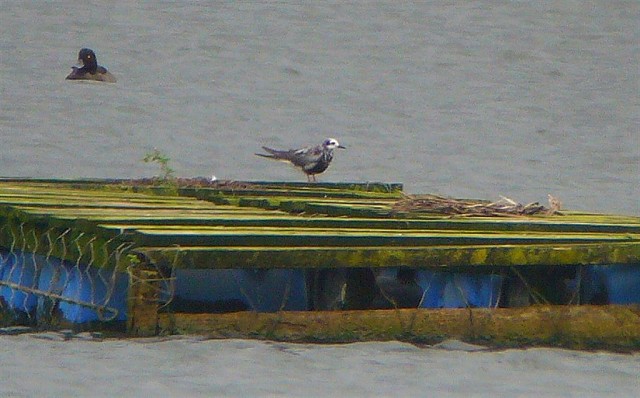 As usual, the only Bee-eater was one still roaming St Mary's (Scilly), present all week. There was also just a single Hoopoe, at Coulsdon (London) on 14th and later refound on 17th. With the hint of an easterly airflow late in the week, there were a few new Wrynecks reported: one was ringed at Kilnsea (East Yorks) on 12th, singles were at Ringstead Bay (Dorset) and Treshnish, Mull (Argyll) on 15th, and two were in private gardens in Devon on 17th, in Ilfracombe and West Down. There was also a possible at Overstrand (Norfolk) on 13th.

Rarer eastern fare included a Citrine Wagtail on Fair Isle on 13th–16th, with the island also seeing the Short-toed Lark to 12th, a Red-backed Shrike on 11th–15th, a Common Rosefinch on 15th, two Barred Warblers on 16th and the island's second Greenish Warbler of the year on 12th–15th. Elsewhere in the Northern Isles, another Red-backed Shrike was at Pool of Virkie (Shetland) on 11th.

Both of last week's Woodchat Shrikes remained all week: the first-summer female at Chipping Sodbury (Glos) and the juvenile on St Mary's (Scilly). There was also a probable juvenile near Skinningrove (Cleveland) on 16th. 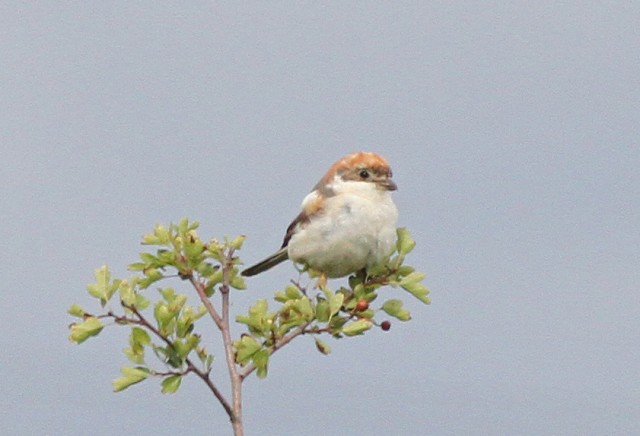 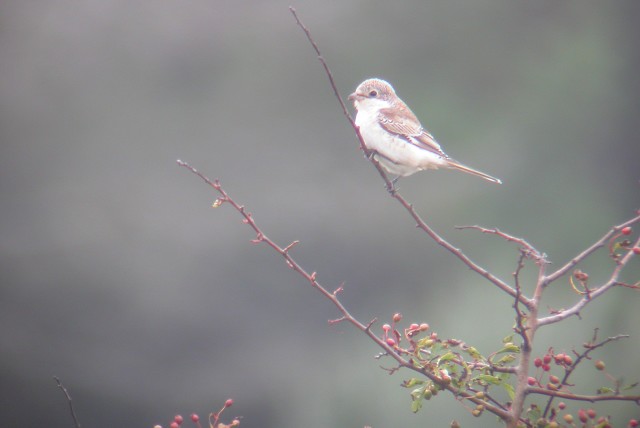 The first Aquatic Warbler of the year arrived pretty much on time, seen briefly at Exminster Marshes (Devon) on 17th. The Melodious Warbler performed far better at Martin's Haven (Pembrokeshire) to 14th, with further birds continuing to arrive during the week: on Bardsey Island (Gwynedd) on 11th, Hengistbury Head (Dorset) on 12th, IBM Lake (Hants) briefly on 13th and on St Mary's (Scilly) on 17th. In contrast, as expected, most Icterine Warblers were along the east and north coasts. Birds were ringed at Hartlepool Headland (Cleveland) on 12th and Filey (North Yorks) on 13th, and others were at Flamborough Head (East Yorks), Skinningrove (Cleveland) and Quendale (Shetland) on 12th, North Ronaldsay (Orkney) and Quarff and Exnaboe (Shetland) on 14th and at Theddlethorpe St Helen (Lincs) on 17th. In the southwest, one was also on St Mary's (Scilly) on 17th. 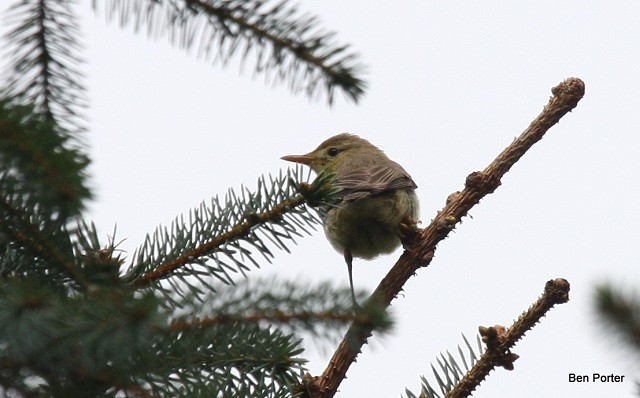 In Shetland, the Western Bonelli's Warbler remained at Gulberwick to 11th. Aside from those already mentioned, further Barred Warblers were also in Shetland, at Sumburgh and Haroldswick, Unst on 14th. The male Subalpine Warbler also remained at Holland Haven (Essex) on 14th–17th. 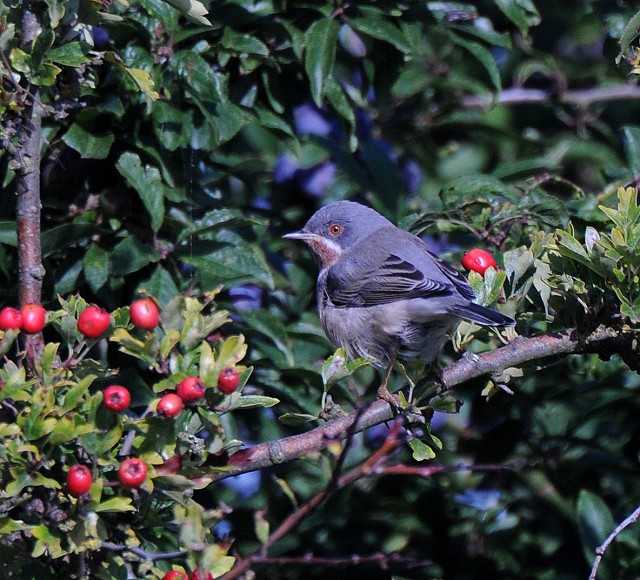 Other passerines of note were mostly on Shetland, with a Common Rosefinch at Halligarth, Unst on 14th and female Two-barred Crossbills at Trondra and Sumburgh on 14th. There were also two briefly seen on wires at Kilnsea (East Yorks) on 12th, though they didn't stay to be appreciated. 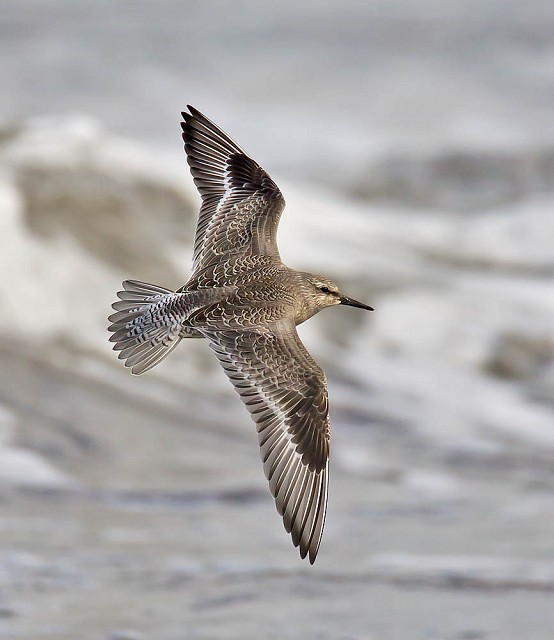 Veteran BirdGuides contributor John Anderson can always be relied upon to produce top-notch images of the birds around his base location of Fife, Scotland. John's huge image collection covers both local specialities and passing visitors, always making good use of composition, pose, setting, colour, detail and action. For the more exciting subjects he photographs, this combination obviously creates compelling images. However, a test of a good photographer is what he or she can make of more plain-looking species. John's flight shot of a juvenile Knot shows how to pass this test. A beautifully posed bird in soft light shows off the intricate plumage details, whilst the background contains just enough detail to show the bird in its natural setting. The limited palette of browns and greys adds to the aesthetic appeal and the breaking waves evoke a strong sense of 'being there'. 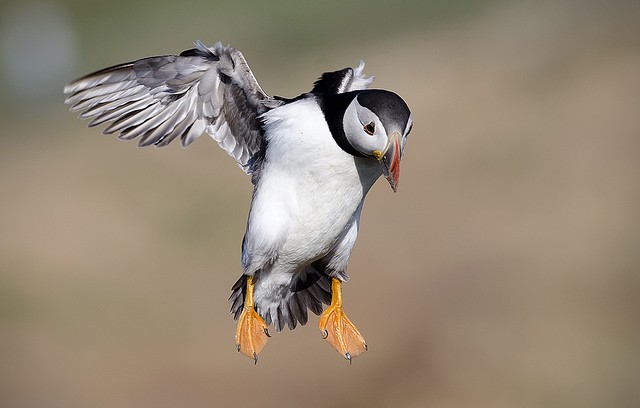 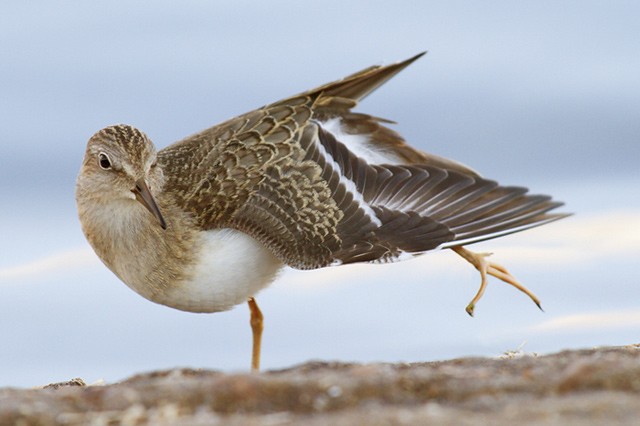 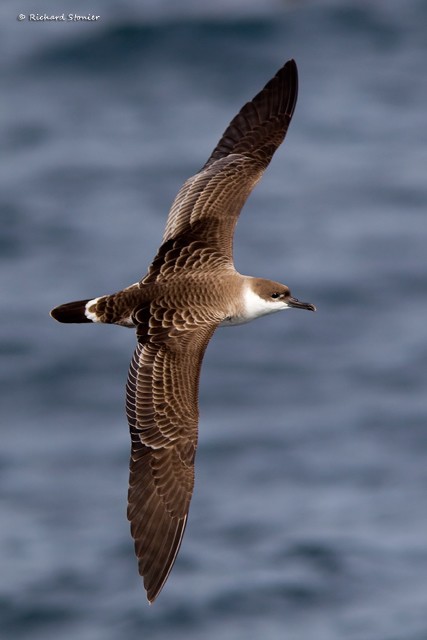 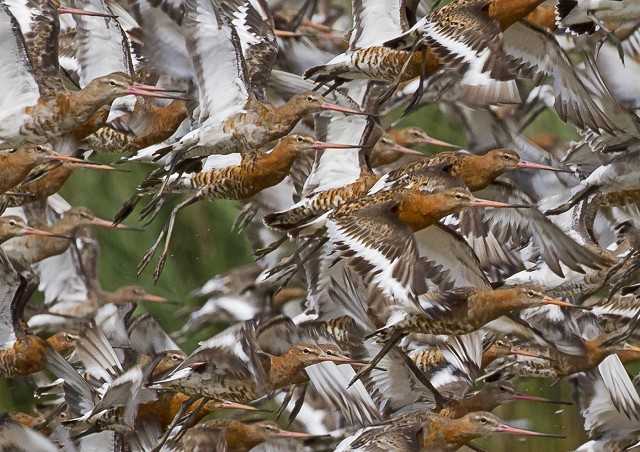 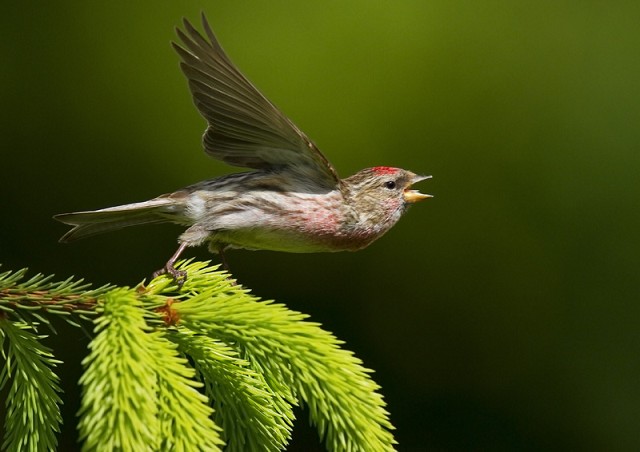 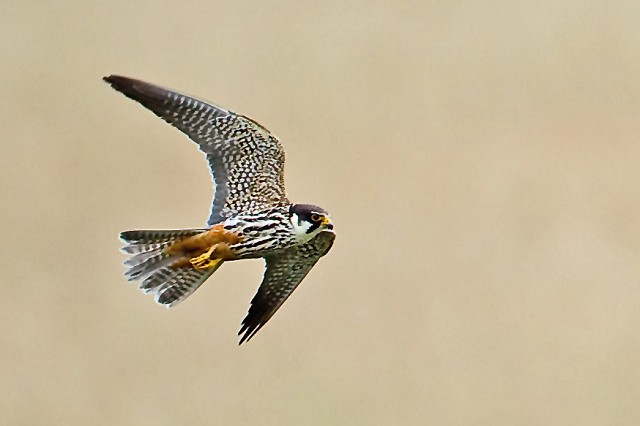 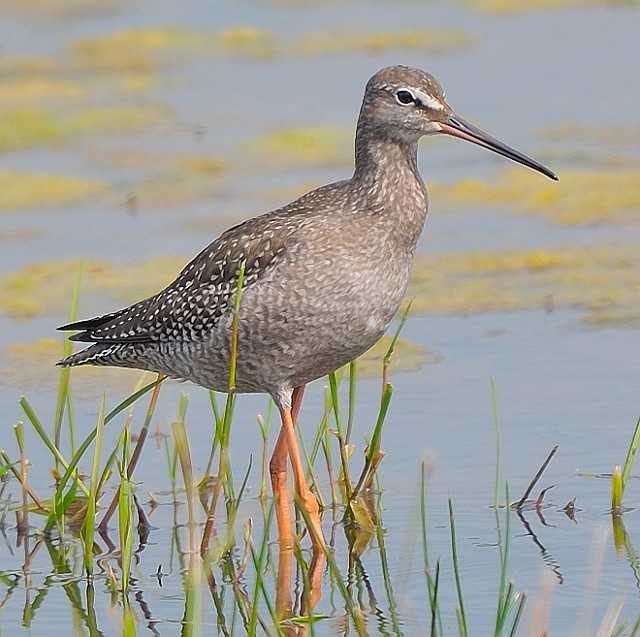 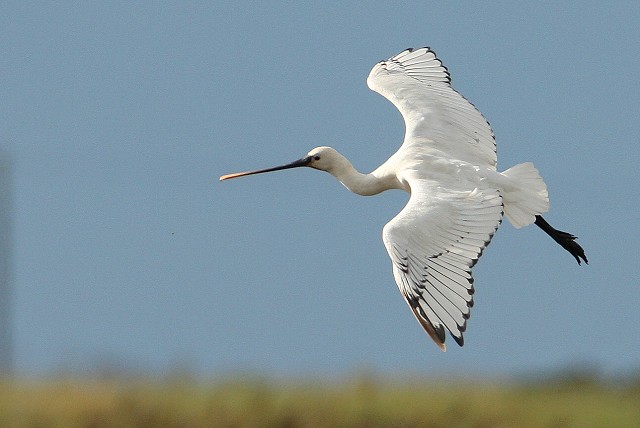 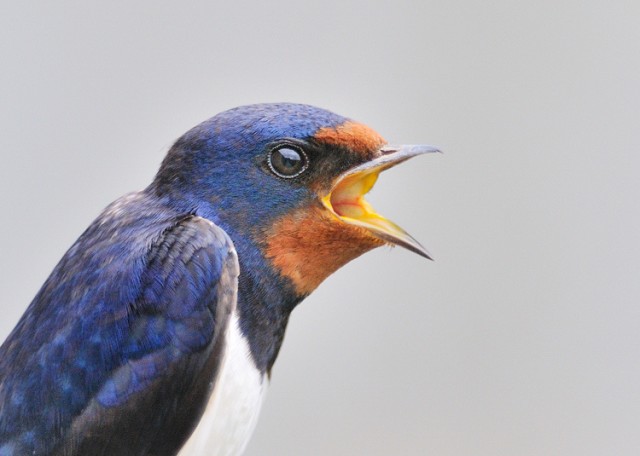