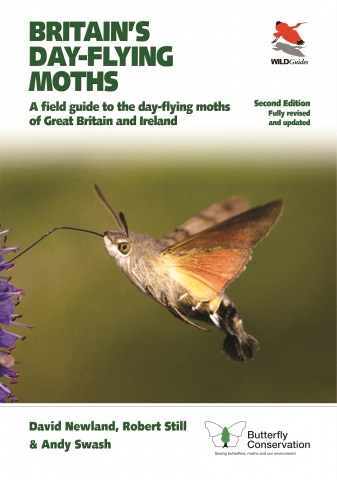 It's nearly six years since the first edition of Britain's Day-flying Moths was reviewed on the BirdGuides website. Since that time the wider interest in moths has increased substantially, aided very much by conservation awareness, education and quality image sharing on social media. Many birdwatchers and general naturalists are now actively seeking to identify a whole host of invertebrates on their local patches and nature reserves, so any compact reference book which will cover a large slice of these is worth considering.

The softback has a firm, inbuilt water-resistant cover which should prolong its field life. After short sections on moth biology, nomenclature and hints on basic moth identification there is a nice overview of eight moth-rich habitat types, followed by an interesting 'gardening for moths' chapter. This outlines many host plants which one can plant in order to encourage the moths to come to your own plot, in time! A personal friend of mine has being doing this for over 10 years now with amazing results.

The main section of this book has individual whole-page accounts for 158 species, most of which can be expected by searching the various described habitats during daylight hours. Using a soft-focus image of each species on a natural background, there is also an adequate distribution map, factual text on habitat, flight period, food-plant preference, biology and day-flying habits to aid the finding of each. Many of the original photographs are re-used, but there is some new material including those showing a couple of recently introduced species, extra habitat and life-history examples. The images tend to show a moth as you would expect to see it resting in the field.

Perhaps the most sought-after day flying moths are the clearwings so it is no surprise that there is now a section on the use of pheromone lures, including a useful table listing which ones are available, and how and when to use them for positive results. All of the burnets and foresters are nicely covered. The iconic Kentish Glory, Emperor Moth and three smaller hawkmoths take pride of place, but six species of larger hawkmoth, which are labelled as 'possible to find during the day', may be a slightly misleading choice as these are rarely seen away from a man-made light source. Towards the end there is a full systematic list reference table of all species dealt with by the book, highlighting habitat and flight season and conservation status.

The original title has obviously had a thoughtful and pleasing upgrade and make-over. It is likely that this title will therefore remain a very useful all-in-one moth guide to carry on those warm summer forays into the field or even when just having a quick glance at what's flying in the garden.