The final avian class at a unique school for birds has graduated with flying colours and was yesterday moved to the secret release location in Somerset: 16 young Common Cranes have just completed ten weeks of 'Crane School' at WWT Slimbridge Wetland Centre in Gloucestershire. Over the last five years there, five classes of young crane chicks have learnt life's essentials and now almost 100 cranes have been released onto the Somerset Levels and Moors.

It's part of the Great Crane Project, a partnership between WWT, RSPB, Pensthorpe Conservation Trust and Viridor Credits, which aims to restore the Eurasian cranes to their former haunts before they were driven to extinction in the 16th century by over-hunting and loss of wetlands. 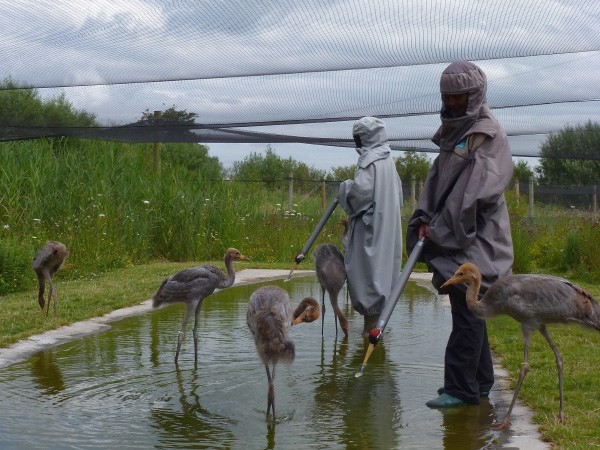 WWT's Amy King is head teacher at Crane School. She said: "This year's Crane School class have really thrived. They've loved their daily walks and this year we drafted in 40 volunteer 'PE teachers' who took the birds for more than 700 hours of exercise. I've worked with the Great Crane Project since day one and it has been the most unforgettable experience. Some of the first birds that I raised have had chicks of their own now. It's just wonderful to know that they're out there, living wild in our landscape once again."

Cranes are long-lived and social birds that live in large flocks. Parents care for their chicks for several months. Their care lasts even beyond the time when they learn to fly, or are fledged. The crane 'pupils' at Crane School are hatched from eggs taken from a healthy wild population in Germany. Human 'teachers' take the role of their natural parents, guiding them through their first few months of life. The cranes' teachers dress in grey hooded overalls to disguise their human form so the young birds don't become accustomed to people. 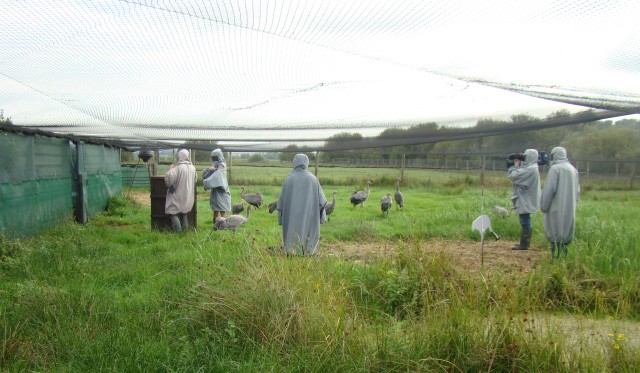 Common Cranes in their release pen on the Somerset Levels (Photo: Michael Wilson/RSPB).

Now the birds have graduated they've been taken to the Somerset Levels and Moors, where they'll be introduced the flock of previous 'Crane School' graduates, who will quickly take them under their wings. Over the next few years it is hoped that the crane flock should start to grow naturally as birds reach maturity and start to breed. As numbers build up the species should spread out across western Britain.

Damon Bridge, Great Crane Project Manager, commented: "With this last class now on the Levels we're all looking forward to the next phase of the project with the cranes settling down to breed and raise youngsters in the wild. Putting these iconic birds back in this special place is so exciting, a real boost not just for the crane population in the UK, but we hope a symbol of a bright future for the Somerset wetlands."