It is one of the greatest and least-known urban wildlife spectacles in the world. For a few weeks every February, Yelkouan Shearwaters pour between the eastern Mediterranean and the Black Sea, funnelling up the Bosphorus. The Bosphorus cleaves Istanbul in two — the dividing line between Europe and Asia — through one of the world's great cities.

NatureGuides recently intercepted the spectacle in the company of the Yelkouan Shearwater Project team.

Yelkouans, from the Turkish for 'wind chaser', used to be an almost mythical subspecies of Manx Shearwater, before being split with (and then from) Balearic Shearwater. Its status outside the eastern Mediterranean and Black Sea is poorly known. It has been claimed from Britain and Ireland but never accepted by any of the relevant rarity committees.

Its status is complicated by identification issues. Appearing somewhere between Manx and Balearic Shearwaters, the video shows some of the key features: the feet projecting beyond the tail tip and the dark axiliaries in a white underwing. It also shows the variations in colour due to light, shape due to angle, and their curious habit of lifting their heads.

Other than the identification obstacles, the conservation status of Yelkouan Shearwater is also difficult to determine because of their secretive lives. Turkey has great potential to host a breeding population, but the species' status in the country is still unclear. As well as monitoring migration at the Bosphorus, the Yelkouan Shearwater Project team is searching for colonies along the Turkish coast. Time and resources are therefore stretched. In order to keep both project activities alive they need volunteer support in the first week of February every year to help monitor the remarkable Bosphorus passage. To find out more, head to www.yelkouanshearwater.org. 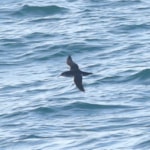