The decline of British starlings

It's winter and the sun is setting over the waving reeds in front you. A few small, black dots begin to fly in: Common Starlings. They're joined by more and more coming from left, right and centre, until thousands of starlings come together as one, and suddenly you're watching a breathtaking murmuration. With so many thousands of birds dancing through the winter sky above you, it's easy to be fooled into thinking the species is doing rather well. Sadly, this couldn't be further from the truth. 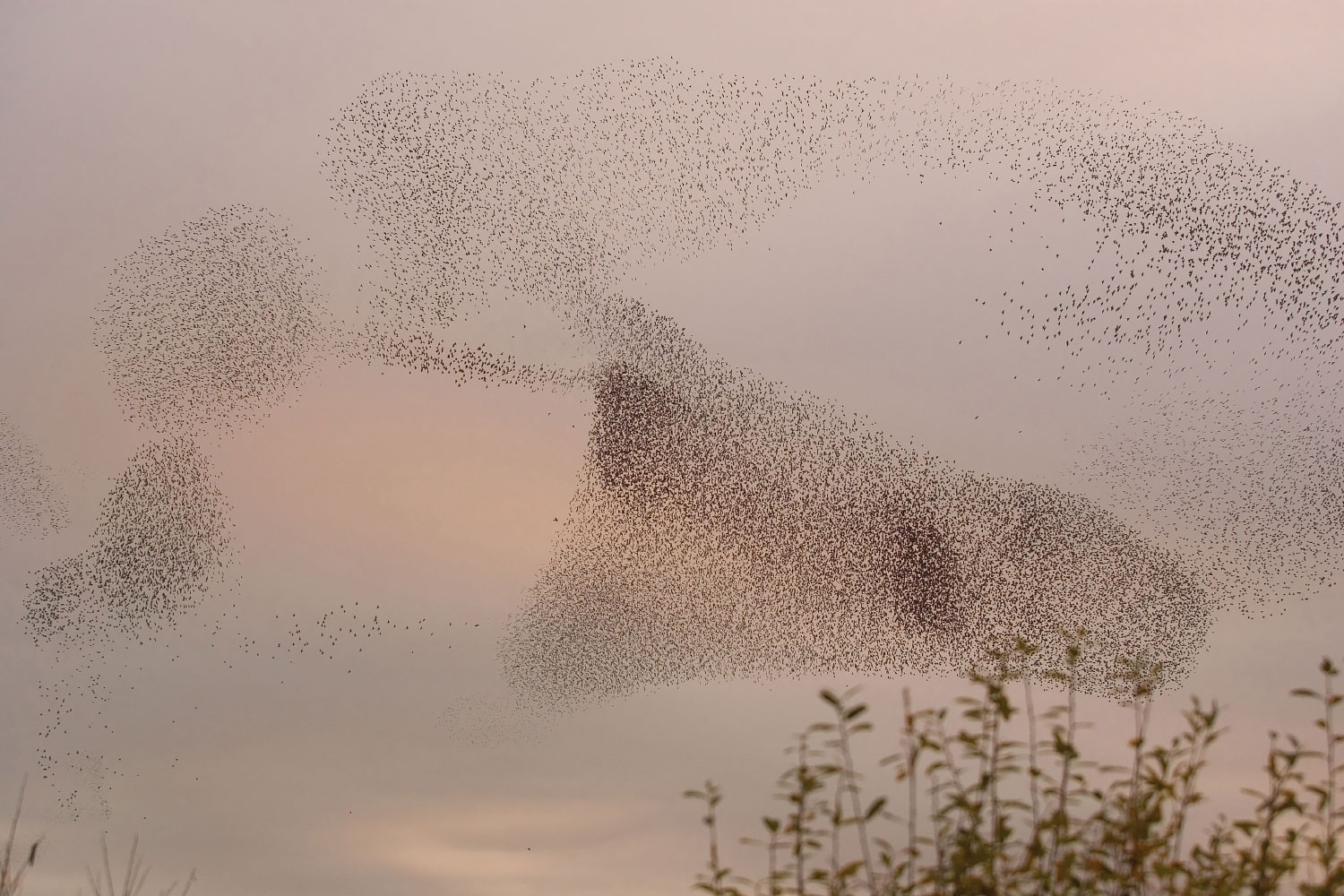 Starling murmurations are one of the great spectacles of winter birding in Britain (David Kjaer / www.rspb-images.com)

The stark facts are that between 1995 and 2016, Britain's breeding population of Common Starling crashed by a staggering 51 per cent. Just let that sink in. It means that there are now only half as many starlings in Britain than when I started watching birds with my dad during the mid-1990s. The situation in England is even worse: we saw an 87 per cent decline between 1967 and 2015. Starlings no longer nest in large parts of Wales and southern England.

Back to that murmuration – many of the starlings you're watching above your head will have travelled here to escape the winter freeze in countries to the north and east. In those places too, numbers are falling, and we're seeing fewer of these birds arriving each year. It means that the large winter gatherings we're used to seeing are becoming smaller. Are the days of starling murmurations numbered?

This is where the scientists at the RSPB Centre for Conservation Science come in. We're trying to discover just what is driving starling declines in the UK and find solutions to improve the prospects for one of our best-known birds. The thing is, despite it happening all over the country, no one knows exactly what is causing the decline. We've discovered lots of things that are not, so we're hopefully getting closer, but it's proving tough to pinpoint exactly what the problem is.

So what do we know? The latest research combining the most recent British Trust for Ornithology (BTO) survey, nest records and ringing data show that the birds seem to be mostly breeding successfully. I've personally helped scientists and volunteers monitor the breeding colony at Hope Farm RSPB, our arable farm just outside Cambridge, and have seen first-hand that starlings are producing plenty of chicks. This means the problem is occurring away from the species' breeding grounds. And this is the tricky part. Just where are starlings going when they're not breeding? What problems do they face when they get there? There are many lines of enquiry. Could the problem lie with the loss of an important food source, predation, changing agricultural practices, or something else? 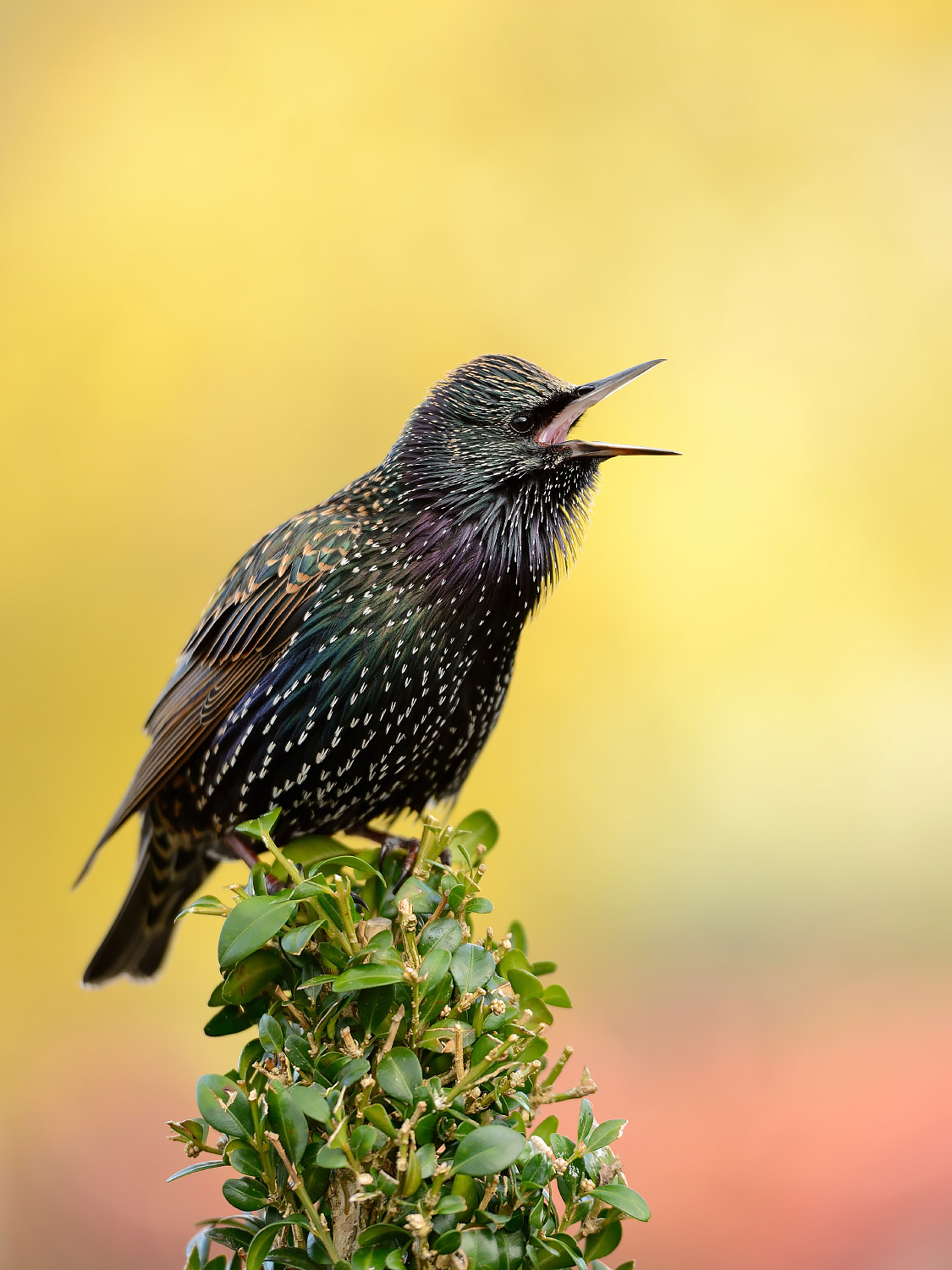 Common Starling is a familiar bird in gardens across Britain, but the species is suffering a drastic decline (www.rspb-images.com).

We have seen that in the first few weeks after fledging, Eurasian Sparrowhawks and cats prey heavily on young Common Starlings. However, once the fledglings have gained some experience of the world, and realise the danger of predators, the losses decrease dramatically. This would be expected in lots of young animals – predation is higher in inexperienced juveniles – and the best available evidence from the BTO's population models rules out predation as having a major role in driving the national decline. We need to look elsewhere.

Research from other scientists involving laboratory studies shows that pollutants, including anti-depressants (from our sewage systems) and flame retardants, badly affect starlings, but it's less clear whether wild starlings are exposed to them. What all of this research, from the RSPB and from others, shows is that it's likely that the starling's shocking decline is caused by a combination of factors. We just need to find out exactly what. 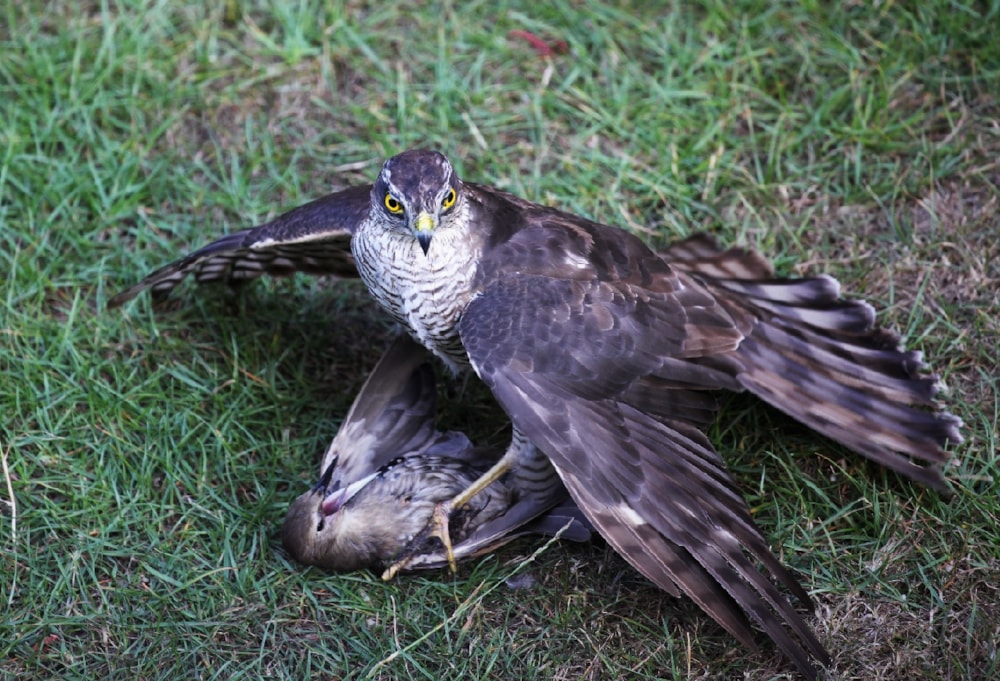 So what is the RSPB doing to research the problems and find a solution? As we think that the issues are occurring away from species' breeding grounds, we first need to find out where starlings head to once the chicks have fledged and breeding is over. We believe this is key to understanding the decline. This led RSPB scientists to pilot a pioneering citizen science project during summer 2018; this was funded by Natural England through its Action for Birds in England programme (AfBiE).

The problem with traditional radio-tracking technology is that it's difficult to follow birds such as starlings that disperse quickly. Indeed, we've struggled to track Common Starlings successfully in previous studies, and it was clear we needed to try something new. For this project, we trialled new tracking equipment that will hopefully improve our success.

Young starlings are too mobile for researchers to track on their own (colour-ringed birds have been seen 40-50 miles away from where they were originally captured), but this was considered a much more manageable challenge for larger groups of volunteer trackers. The idea was tested by fitting 25 young birds in Bristol with radio tags and then tracking them with portable receiver stations placed in the homes and cars of local volunteers.

There were two aims to this project. Firstly, to shed some light on where the starlings go to after breeding, the habitats they use and the threats they face. Secondly, we wanted to see if a project like this is a viable option to track starlings which could potentially be carried out on a larger scale. Could further expansion of the volunteer network help build a more complete picture of starling behaviour? 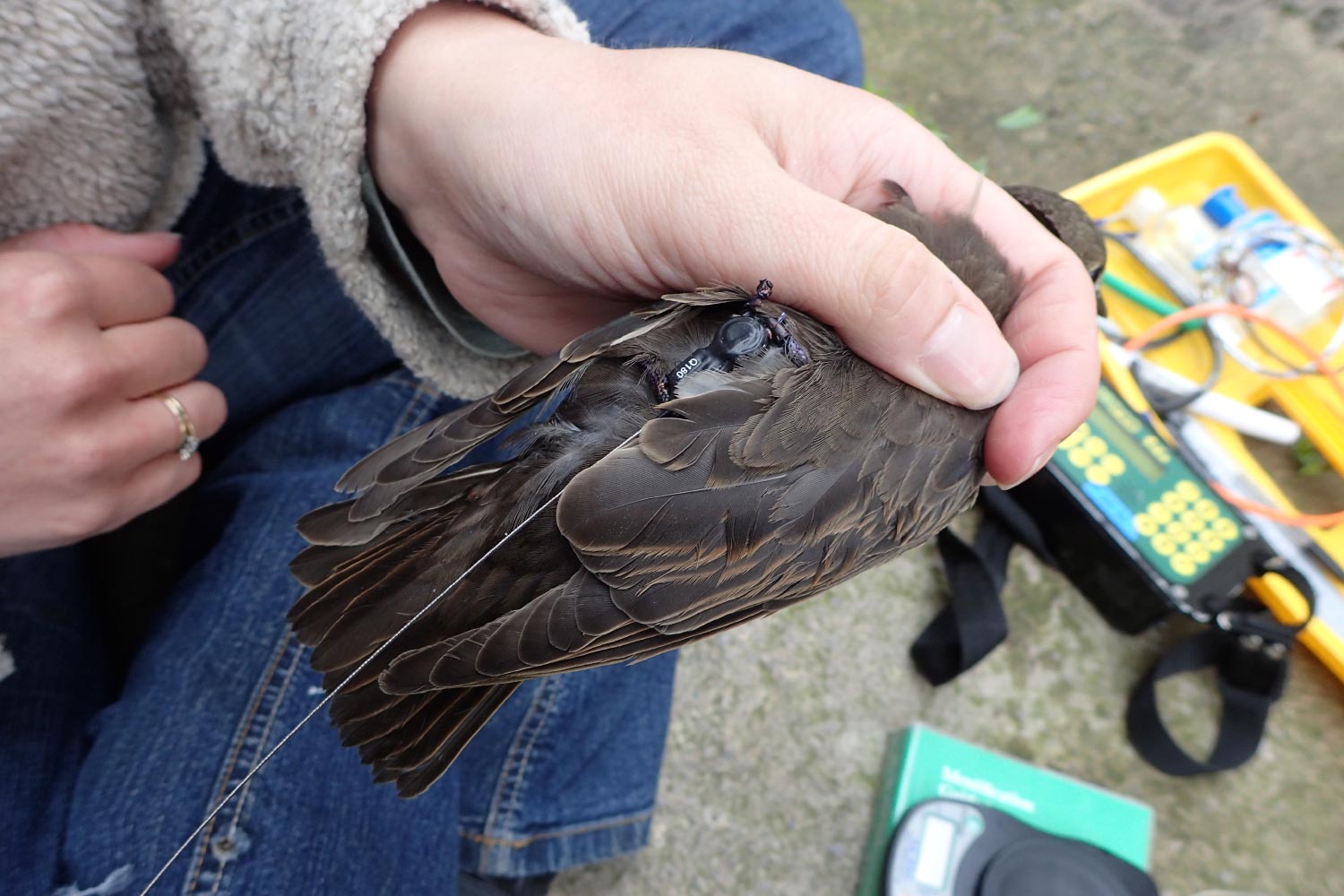 This juvenile Common Starling has been tagged and colour ringed. Each tag gives off an individual signal at set radio frequencies, making it possible to identify single birds and follow them (David Buckingham / www.rspb-images.com).

You might ask, if we can track European Turtle Doves to Africa and back, why do we not know where Common Starlings are going? For starters, starlings are much smaller – too small in fact. The technology, although continually shrinking, does not allow us to put satellite tags on starlings. And we'd need a lot. Another option is geologgers, but the difficulty is getting them back again – we'd need to recapture the birds to download the data. We can only retrieve logger data from birds that survive the winter and return to their breeding grounds. The crucial information is stored in those loggers carried by birds that died in the meantime – they aren't going to come back.

This is why we've been piloting new tracking technology in Bristol. It's possible that this could become a cheap and useful way of tracking starlings. Using an army of volunteers for a project like this is also a new a venture for us.

We're now carefully analysing what went well and what we can improve from this pilot. Could we roll this out to other towns and cities? Watch this space. If we do, you could get involved in cutting-edge science and help solve a conservation mystery! 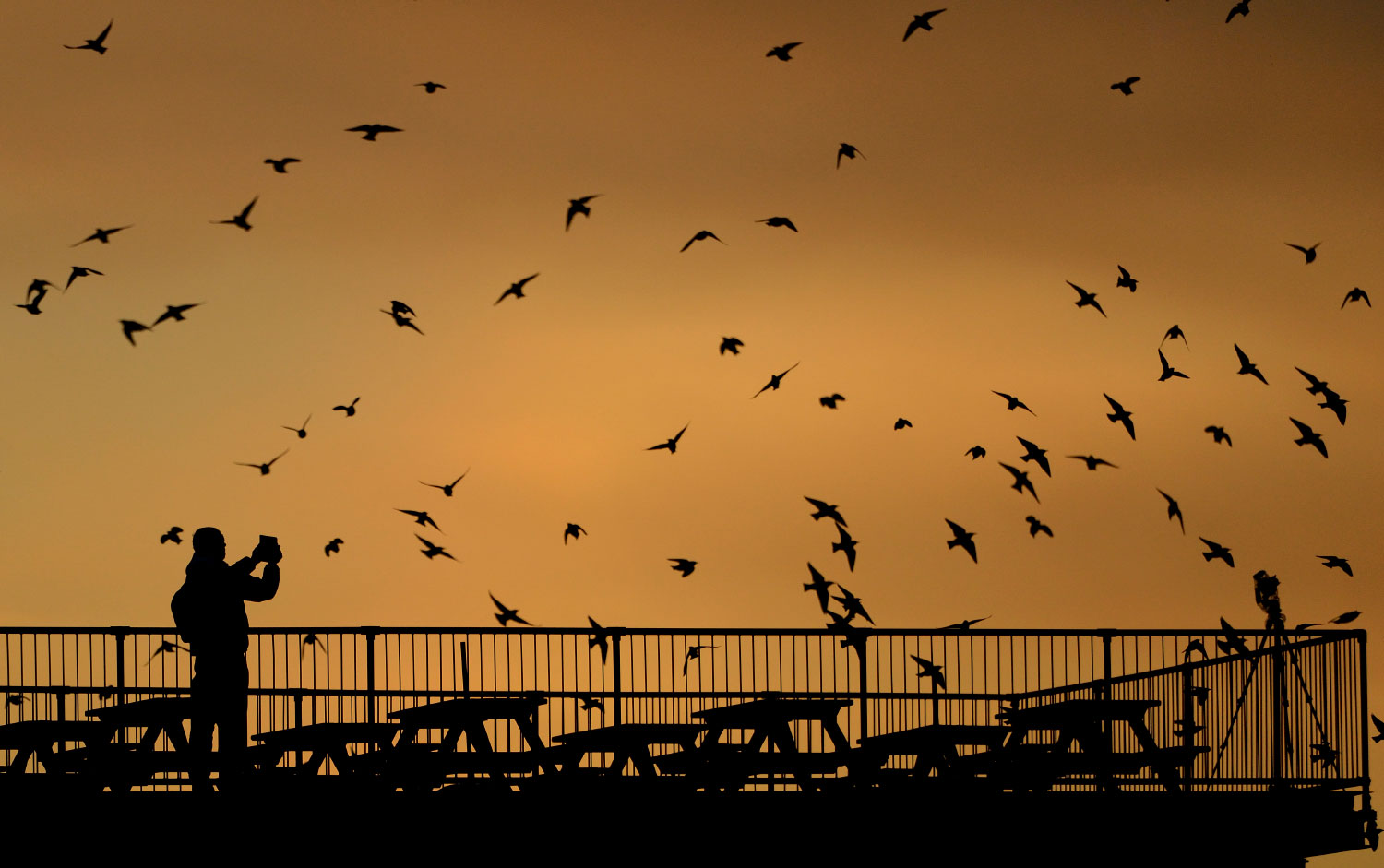 Large winter gatherings of Common Starlings, like these birds flocking together at the pier in Aberystwyth, Wales, may become a thing of the past if the reasons behind the species' decline can't be identified and conservation measures put in place (Ben Andrew / www.rspb-images.com).

This is the point at which RSPB Centre for Conservation Science research currently stands. If we can discover what threats Britain's Common Starlings are exposed to while they are away from their breeding grounds, then we will be a step closer to finding out what is causing this once common and ubiquitous species to decline so dramatically. And then it'll be onto the next stage, which is finding a solution to halt and eventually reverse this decline.

So next time you're watching that Common Starling murmuration, as well as being mesmerised by the balletic aerial dance above your head, remember that those birds are in trouble, and scientists are trying hard to find out what's wrong, before it's too late. If you're interested in seeing a murmuration check out this article for tips on where to go. 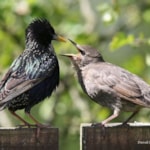