This article is a follow-up to the first section dealing with the 'grey geese', which can be seen in full at: Full Grey Geese Article.

The nominate race canadensis was introduced from North America to grace ornamental parks in England in the 17th century, with the first birds arriving at St. James's Park in London in 1665. This is the goose species with which most are familiar with a breeding population in excess of 60,000 birds. Birds occur throughout England and Wales, southern Scotland and parts of Northern Ireland. A feral population also occurs in Scandinavia (10,000 pairs), which winters in northern France, the Netherlands and Germany. Small resident populations are also found elsewhere in Europe.

The Canada Goose in Britain is largely sedentary, with limited dispersal. There is a moult migration to the Beauly Firth (Moray) which mostly involves birds from Yorkshire and the West Midlands. A small number of ringed Scandinavian birds have occurred in Britain and Ireland, and one was recovered from the River Ob in west Siberia. There have also been two movements between Britain and the USA. Our local Canada Geese are perhaps not as boring as we first thought!

Most birders become more interested in Canada Geese when the vagrant forms are considered. There have been up to 12 races recognised, varying in size and colour tone. Of these, four have definitely occurred as vagrants (with two others possibly having done so), associated with wild geese in Scotland (mainly on Islay), and Ireland and others with Pinkfeet in Norfolk.

This is the smallest of the pale forms, with a thick straight neck and a small bill; hutchinsii breeds in Arctic Canada and winters on the Gulf coast of Texas and Mexico. This is the commonest of the vagrant forms to occur in northwest Europe.

Small, with a short bill and square-headed appearance. Many, but not all, show a dark throat line which divides the white chin strap; taverneri breeds from the Mackenzie River westwards and winters on the western seaboard southwards to California — this is one of the least likely forms to occur, but perhaps birds here have become caught up with carrier species wintering on this side of the Atlantic.

Slightly larger than Pink-footed Goose, but size is variable. Longish body, medium-sized bill and a rounded head; parvipes breeds in Arctic Canada and winters in the southern USA.

The largest of the vagrant forms, only slightly smaller than canadensis, with a long, thin, neck and a long bill, with narrower feather fringes to the upperparts in fresh plumage; interior breeds to the south and east of Hudson Bay and winters in southeastern USA.

In addition, birds of the nominate race canadensis have occurred with carrier species on this side of the Atlantic and were presumed vagrants. In the absence of a ringing recovery this would be difficult to prove beyond doubt.

This is the smallest and darkest of the vagrant forms, with a small bill and a short neck, and is similar in size to a Brent Goose; minima breeds in coastal western Alaska and winters from California to northern Mexico and is perhaps an unlikely vagrant to these shores, but birds believed to be minima have been seen on the eastern seaboard of the USA. However, as with all long-distance migrants anything can happen, and if it is believed that Taverner's occurs naturally and Ross's Goose occurs naturally, then so could minima. The large number of 'feral' birds at large would make isolating a natural vagrant tricky.

There is a feral breeding population of around 1,000 birds, however it is the wintering population of some 60,000 birds that is far more exciting. The majority of these are found around the Solway Firth (the easiest location being Caerlaverock WWT NY0365 in Dumfries and Galloway) and on Islay (where up to 30,000 winter).

There are three breeding populations of Barnacle Geese in the world, two of which winter exclusively in Britain and Ireland. The westernmost population breed in eastern Greenland, stage in Iceland, and then go on to winter in western Scotland and Ireland. The Svalbard breeding population move along the Norwegian coast and cross the North Sea to winter in the Solway Firth. The eastern breeding population from Novaya Zemlya winter in the Netherlands and Germany. Wintering birds away from these areas are usually attributed to feral birds, but ringing recoveries have illustrated that wild birds can, and do, occur away from their usual haunts either singly, or in small groups or with flocks of other geese.

Dark-bellied birds breed in northern Siberia, mainly on the Taimyr Peninsula. The main wintering areas are on the coasts of eastern and southern England, western France and the Netherlands with small numbers in Denmark and Germany. Favoured wintering locations in England include The Wash, the Thames Estuary and the south coast. Following a massive decline in numbers during the 1930s, numbers have steadily recovered and the world population is thought to be in the region of a quarter of a million birds, with the English wintering population over 100,000.

Pale-bellied birds have two main populations which breed and spend the winter in separate areas. One breeds on Canadian Arctic islands and Greenland, migrating through Iceland to winter in Ireland. The other population breeds on Svalbard and Franz Josef Land and winters mainly in Denmark with smaller numbers on Holy Island NU1342 (Northumberland), though in recent years the island has held the entire population and is the only regular location for Pale-bellied birds in England.

Breeds across eastern Siberia to Alaska and western Canada east to the Perry River. Winters mainly on the Pacific coast from British Columbia to Baja California, with declining numbers in China, Korea and Japan. In Britain it is an annual vagrant, with over 100 records, the majority associated with Dark-bellied Brent Geese flocks, particularly those in Norfolk and south coast. The majority of these records have been in the last 30 years, presumably due to a better understanding of identification criteria. Hybrids do occur.

Four different populations of brent geese breed in the Canadian Arctic. One of these is only known to breed on Melville and Prince Patrick Islands in the western Canadian High Arctic and winters almost exclusively in Puget Sound in the western USA. These birds are known as Grey-bellied Brants and breed north of Black Brant and west of the Pale-bellied Brent Geese that breed in the Canadian High Arctic and winter mostly in Ireland. With a declining population, in world terms these birds are rare, with a total population of between 4,000 and 8,000 birds. The taxonomic status of these birds is still ongoing and in appearance birds fall somewhere between Black Brant and Pale-bellied Brent Goose, but are quite variable. Up to 15 were noted in Ireland during 2001 and it is likely that birds of this form have been overlooked.

One of the most striking of geese, and as a result, popular with wildfowl collectors. It breeds mainly on the Taimyr Peninsula and migrates southwest to winter on the northern and western shores of the Black Sea and most now winter in the Dobrogea region of Romania. There have been around 70 British records with the majority in the east and south and two have been present during the winter 2003/04; a returning bird on Islay (Argyll) and another at Martin Mere WWT (Lancs).

Finally, although not a branta, Egyptian Goose is included to complete the 'set'.

This species was introduced to Britain in the 18th century there is now a breeding population of 750–800 pairs, mostly in Norfolk. It also breeds in the Netherlands, with smaller populations in Belgium and Germany. British birds are sedentary, with a short-distance moult migration in July and August. The Migration Atlas reported 5 recoveries of ringed birds, all of which had moved less than 5km. Birds away from the species' stronghold are most likely to be escapes from local collections.

In addition to the relevant sections of Birds of the Western Palearctic, Wildfowl: An identification Guide to the Ducks, Geese and Swans of the World and The Migration Atlas the following articles provide further very useful information on recent advances in goose taxonomy and identification (this reference list is by no means exhaustive!). 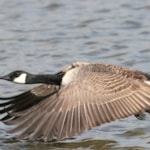 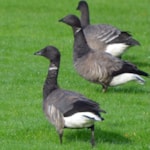 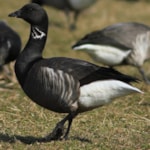 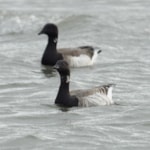 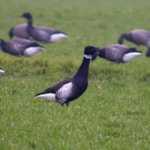 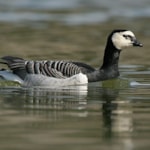 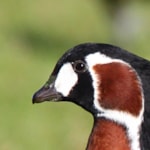 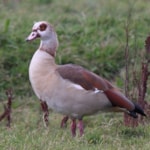