Focus On: the redpolls are coming

The redpolls are coming, bringing great entertainment, rare-bird-finding potential (at personal and county level), and the inevitable controversy. Winter 2010–11 looks set to be a really good redpoll-hunting winter. The local recording area near my Sheffield home is already buzzing with small flocks of Lesser Redpolls that threaten to contain more Mealy Redpolls than the half-dozen already found. 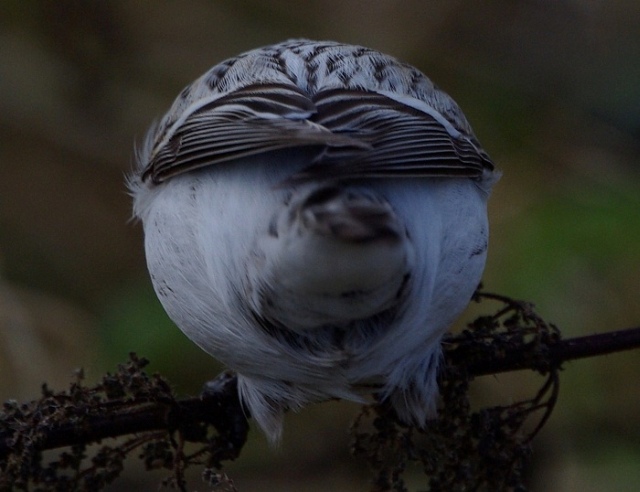 Hornemann's Arctic Redpoll: a perfectly round ball of white. The white feathers really do wrap around the rump — and check out those feathery 'trousers' hiding the legs. Maybe one of these will be found this winter in the UK at a nice accessible spot — that'd be alright. For more photos of this chap, scroll down to the bottom. Unst, Shetland, October 2010. (Photo: Martin Garner.)

This article has been in the pipeline for a couple of weeks now, and as I write Coue's Arctic Redpolls are starting to be reported and the mighty Greenland Redpoll is top of my targets for a midwinter find near home. Good numbers of the latter passed through the Northern Isles last month, together with a handful of Hornemann's — any of these could filter further south. With examples of Greenland Redpoll in Hampshire and Norfolk last winter, any redpoll taxon is possible anywhere in the country, so it's game on!

Here's a list of six potential redpolls to look for:

The Common Redpoll complex consisting of:

The two races of Arctic Redpoll:

Last, but not least: 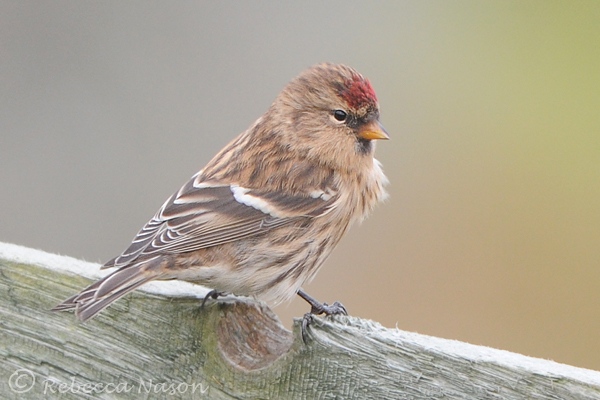 Buff all over. Buff-washed face, flank sides and even a tad onto the wing bars confirm this little Blue Tit-sized redpoll. The rump can have a little off-white-streaked patch, and there may be a couple of weak white tramlines on the mantle. The undertail coverts can be plain and unmarked but are usually quite richly yellowy-buff-coloured. Beware of adult males in fresh plumage, which do get mistaken for Mealys — a bit larger than the young birds and females around them, and a tad paler-looking.

A great comparison of two birds from the same flock. Lesser Redpoll on the left and Mealy Redpoll on the right. Whalsay, Shetland, November 2010. (Photo: Jason Atkinson.)

The first feature I usually look for when searching for Mealys is bright white in the supercilium. On less obvious individuals, this is a must-have character for me to think I might have a Mealy in a flock of Lessers. Most Mealys also have a whiter ground colour to the flanks than Lessers, which makes the black streaks, framed in thin brown edges, look much more striking. 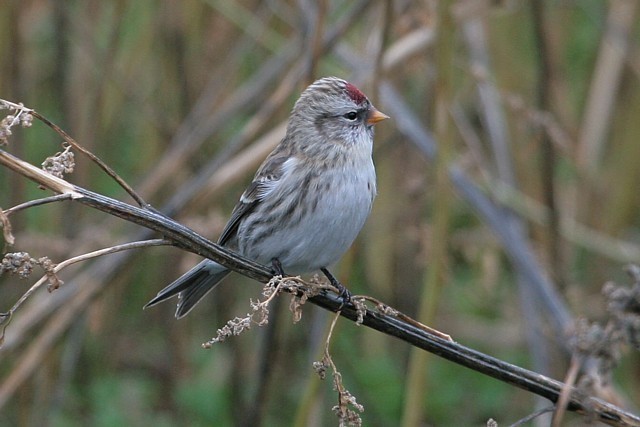 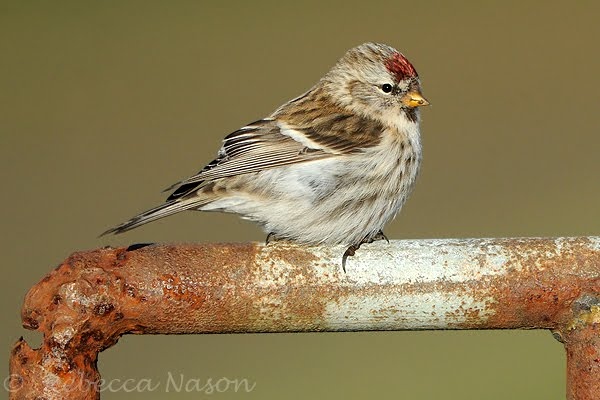 This is the kind of Mealy that's most easily overlooked in a flock of Lessers. The upperparts are little different but the amount of white in the supercilium and 'fanning' around the back of the ear coverts puts it in the Mealy zone. The flanks also lack the more extensive buffy tones of Lesser and the undertail coverts look whiter. 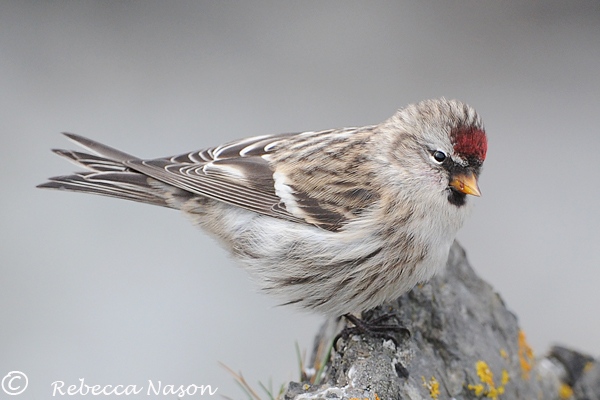 More of Rebecca's great redpoll photos can be found here. 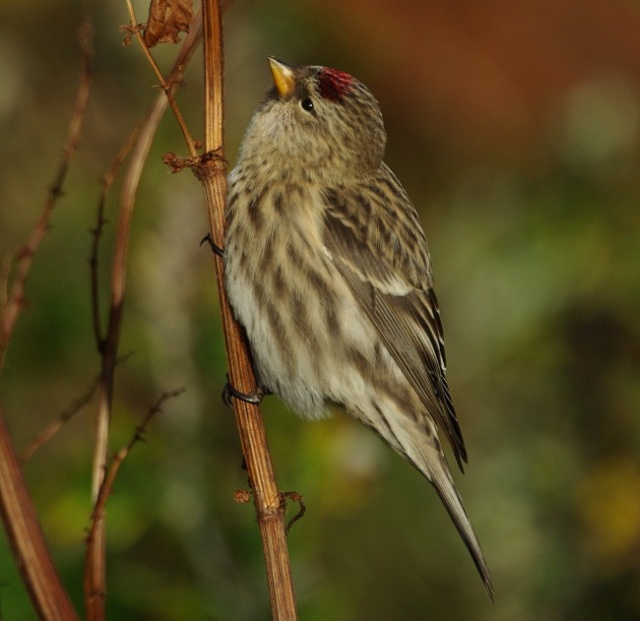 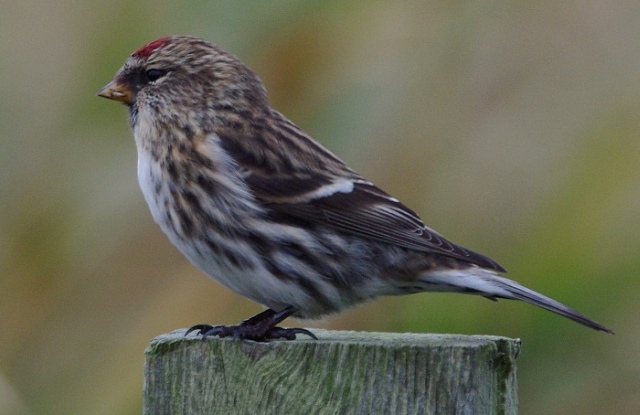 Technically these include the race islandica and are collectively referred to as 'NW Redpoll'. These things are almost as big as a sheep (OK, I mean almost Chaffinch- or Brambling-sized rather than Blue Tit-sized) and have deeper-sounding calls. Without accurate size comparison it's not worth trying to claim a Greenland. Once size is established, the very heavy 3–4 lines of 'cat's claw' streaks on the flanks, the swarthy dark tones to the head and mantle, and the deep-based bill, usually stand out. The bird in the lower photo is a little paler in plumage tones. 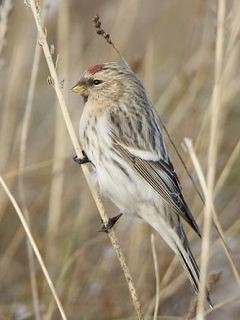 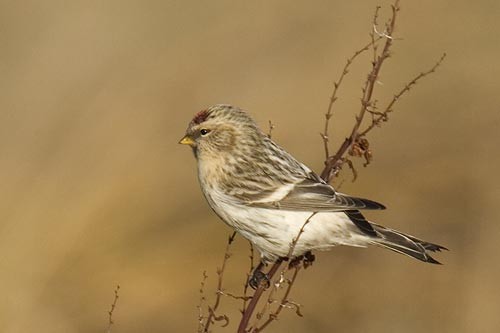 Among 119 photos of Arctic Redpoll on Iris, only a handful of exilipes are represented, and even for some of these the identification is disputed. Throw in the possibility of some of the paler Icelandic Redpolls being from exilipes colonising stock and we are forced to admit: we have much to learn about identification of Coue's. We have not 'arrived'!

My rule of thumb is that any more than three Mealys (or even fewer!) can contain an Arctic. A flock of 10 Mealys would get me out looking immediately. First-winters are streakier and browner than might be expected and are easily overlooked. The combination of weaker flank-streaking, pale buff (not brown) on the mantle, slightly punched-in face, sugar-cube-sized white (or very lightly spotted) rump, pale chamois tones to the face and upper breast, undertail coverts streaks limited to one central torpedo-shaped dark mark (not a big fat arrowhead) — occasionally with two needle-thin acolytes — should secure an exilipes Arctic. However they are not all that simple.

The last few autumns have seen an unexpected surge of records in the Northern Isles. While this current phenomenon continues, hope remains of an accessible Hornemann's being found on the UK mainland. Sometimes bigger than even the mighty Greenland, they remain, I would argue, the most stunning of all redpolls. If you find one in a flock of Lessers, there won't be much controversy over its identification (I hope)! 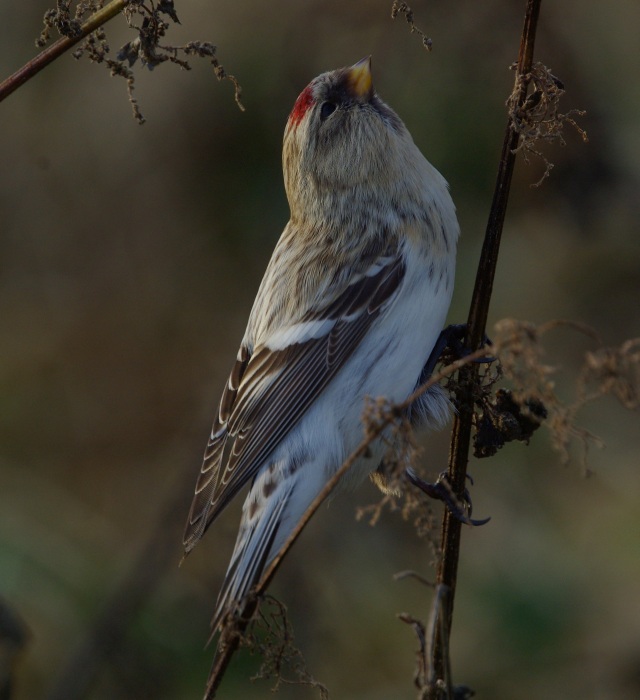 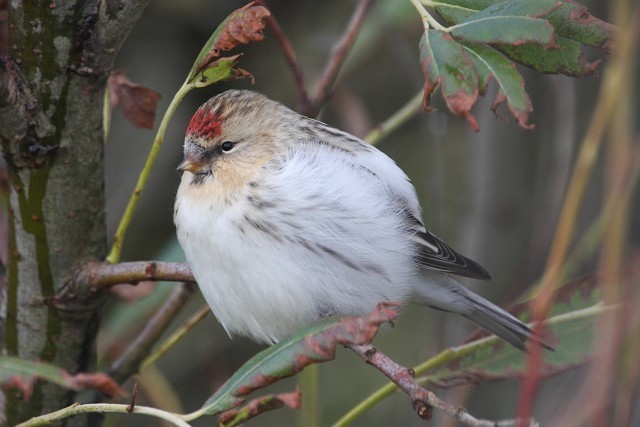 Most plumage characters of hornemanni can be matched by the palest, less-streaky exilipes, so it's essential to get an accurate assessment of size. Like Greenland Redpolls, in direct comparison Hornemann's should look almost as big as a Chaffinch or Brambling, dwarfing Lessers if any should be in the vicinity. That said, there is a 'character' to Hornemann's that is hard to articulate in terms of specifics. A cold, white ground colour over most of the plumage, extensive grey and white upperparts (not just white tramlines), a large white wrap around the rump, weak flank streaking and, particularly, a grubby short, deep-based bill, set in a deep chamois-coloured face — standing out more from surrounding white — characterises many. 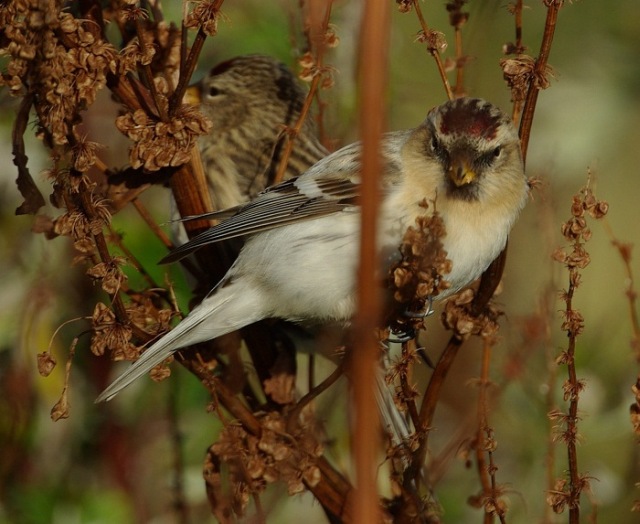 Hornemann's Arctic Redpoll, Unst, Shetland, October 2010. This is the same bird showing its rear-end view at the top of the page — the Ultimate Redpoll. (Photo: Martin Garner.)

This bird ticks many Coue's Arctic Redpoll boxes, but is at the intermediate end of identification. Some observers would be happier to call it a Mealy Redpoll, but this may be more through conservatism than accurate identification. Notice, though, how different the bird appears in two different photos, especially in terms of bill size, overall structure and streaking. 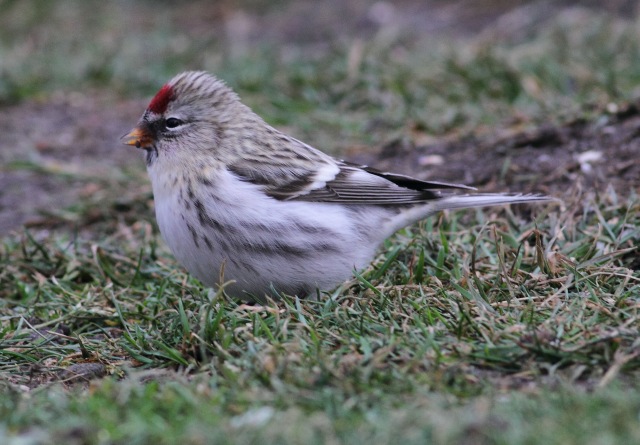 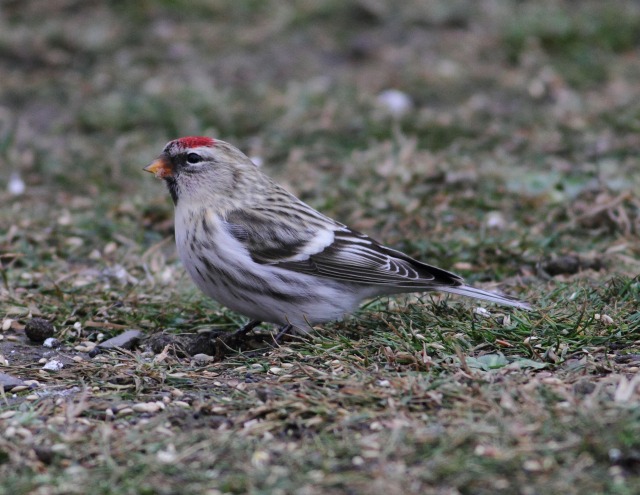 I don't find birds like this a hassle — just fascinating. The context of our problem with Coue's identification is that they have mainly occurred in invasion years. With many individuals, even in one flock, it is tempting to focus on the most striking, readily identified individual, with the intermediate birds being quietly logged as also-rans. In non-invasion years these same intermediates — which I suspect are very often genuine Coue's — cause major headaches because they don't look like the easy birds from the invasion years.

The controversy is also part fuelled by a desire to name every redpoll. Beware of confident proclamations from individuals and the news services. Make your own mind up and remember, they are not all identifiable, despite protestations to the contrary. Calling a bird a Mealy Redpoll, when it is really an intermediate/possible Coue's, should be a bookable offence! Calling it intermediate, ID uncertain or tricky is more realistic. The particular problem zone lies in the realm of streaky first-winter Arctic Redpolls and rather pale-looking Mealy Redpolls.

"Redpoll identification is challenging because Hoary and Common Redpoll seem to show an unbroken continuum of variation from pale to dark, and there are no fully reliable differences. So birders have to rely on a subjective assessment of overall colour and struggle to define the threshold for confident identification. Virtually all birders see redpolls only in the winter, where identification is reduced to an utterly one-sided question: "Where can we draw the line so that we are sure the accepted records of Hoary Redpolls are correct?"

Since the goal is high confidence, this leads to a narrow definition of Hoary Redpoll — only the palest (and smallest-billed) birds are named and reported as Hoaries. This leads to two problems (the second more serious). First, we only identify part of the population — some darker Hoary Redpolls are excluded. Second, many of those intermediate birds are simply lumped into our broad definition of Common, and receive no extra attention. There's nothing wrong with excluding some intermediate birds from being called Hoaries, as long as birders understand that some Hoaries are being excluded. This is conservative. But most people give redpolls very uneven treatment by demanding that Hoaries meet high standards, and then calling everything else Common. This is not conservative. We should at least be fair and apply equally strict criteria to our Common Redpoll identifications."

For much more, see David's blog.

Finally — attracting them to your garden

Millet and Niger (thistle seed) are the magic ingredients. Way back when, one early November, I noticed a single Lesser Redpoll feeding on a roadside near my home in Northern Ireland. I hastily went and purchased a good supply of millet including 'millet sprays' (budgie food). Because redpolls have loud far-carrying calls and are highly curious, one redpoll can bring in lots more. It's even possible to 'pish' them out of the sky as they fly over! Within a couple of months 30 Lesser Redpolls were feeding my garden every day; on the millet sprays, seed cast on the ground and on plastic feeders.

I hope you enjoy the redpolls this winter.