"I wasn't ready to discuss it."

For those who follow rare-bird-finding trivia, who wrote these words in autumn 1988 about a bird on the Isles of Scilly and why? * (see answer at end)

Late September/early October 2010 on Shetland was notable for a number of re-identifications: a Brown Flycatcher was in fact a Spotted Flycatcher, a Wood Duck was in fact a Mandarin, a Lanceolated Warbler and a Pallas's Grasshopper Warbler were both in fact Grasshopper Warblers and a Booted Warbler became a Sykes's Warbler. I would suggest that, in most of these cases, at least one contributory factor in the misidentification was pressure; pressure to disclose, pressure to announce to the (very small world) of interested fellow birders. I wish it wasn't so.

Decisions made hastily under pressure can often lead to mistakes — no points for stating the obvious. Yet why do finders of rare birds feel under such pressure? I say — take your time!

One of the birds I was involved in identifying during the same period on Shetland was a Lanceolated Warbler at Skaw, Unst. I was leading a tour group at the time and we first saw this bird at 4 pm and suspected it might be a Lanceolated Warbler. However, despite chatting to a couple of folk, we didn't release any news until four and a half hours later — deliberately trying to ignore the pressure. So I will talk through the process a bit in the hope of injecting some realism into rare bird identification — especially for the more challenging species — and as a plea for less pressure and more patience. 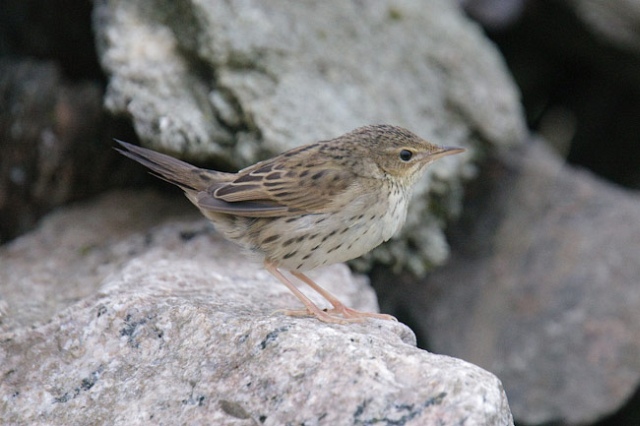 Lanceolated Warbler, Out Skerries, Shetland, 15th October 2009. When birds sit out in full view for long periods, identifications are not so tricky. Unfortunately a lot of bird identification isn't like this. (Photo: Michael Mckee)

We'd arrived at Skaw to be greeted by rain. I flushed a small warbler from behind a shed at the farm, which zoomed around a corner and out of sight, so I gathered the rest of the group to relocate it. Some 10 minutes later Paul Bright-Thomas and I had had the first half-decent, very brief views. A Locustella warbler for sure; small, dark and heavily streaked above. Paul thought the pale tertial fringes looked crisp — I couldn't be sure. We gathered the group again, this time with news: It's either a Grasshopper or Lanceolated Warbler — we think it might be the latter.

For about 40–50 minutes, we endeavoured to get more views. Not easy: pouring rain and a secretive, mostly hidden bird. We pieced together:

Not enough. Suspicions were high that it might be a Lanceolated Warbler, but not enough. So I suggested we all pause, go back to the van and consult identification literature. I don't personally know every identification feature of every rare bird — though I have met some who claim they do! I knew we might only get one shot at a really good view and knew how easy it was to be unaware of some clinching feature. I wanted to be fully armed. A quick look in Collins Bird Guide and 'Nils' (Advanced Bird ID Guide); we even came up with new verb — to 'Nils' a bird, i.e. to process its identification using this book. We didn't glean much more than we knew already, but it reassured us to press on.

Eventually came the bird's best showing as it hunkered out of the rain under a diesel tank. Now I could see the whole bird as I looked down on it: it was facing away, giving a full view of its back. A clear view; surely the identification would be blindingly obvious. I went straight for the easily seen tertials. Dumbstruck, I couldn't believe it: they were so rain-soaked, as was most of the plumage, that I couldn't 'read' the key plumage patterns. The side of the undertail coverts were visible, but just looked wet. I could see a few obvious streaks on the flanks, but Grasshopper Warbler can show those too. Stuck! I just stared at this bird and felt stuck. 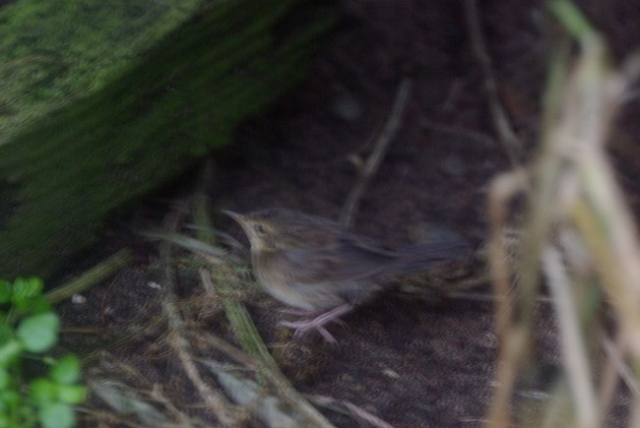 Stuck moment. A small, dark, rain-drenched warbler — in the dark. Much of the plumage unreadable, not like in the field guides! (Photo: Martin Garner)

"Snap out of it Martin!" I counselled myself and started to try and note what I could actually see. The primary projection looked short, really short — it seemed to be no much more than ⅓ of the tertials. Was this useful? Then it turned and for the second time revealed a line of breast streaking that extended onto the breast sides, as also seen by one group member, Graham Croney. I tried to take a couple of photos in seeming near-darkness (at ¼ of a second).

We then gathered and pieced together what we had and began to say "It has to be a Lancy": the extent of the breast streaking, the upperparts streaking, and its small dark size and flight and that run-along-the fence-line thing. We allowed ourselves a moment of celebration — but we were not done with our identification process yet.

It was after 6pm and with darkness now falling we headed back to our digs for hot showers and dry clothes. I rang a couple of friends to process the bird's identification with them. We then gathered around the dinner table to process calmly what we had seen, and to review the poor photos and some literature. One feature that really encouraged me personally was the primary projection. I had not hitherto appreciated its significance in identification. When the wing is tightly folded on Lanceolated it really can be as short as c.30% of the tertial length versus c.70% on Grasshopper Warbler (so to my eyes on the latter the primary projection 'pokes out' from the closed wing, looking, at a glance, almost as long as the tertials). Another feature which was completely new to me was the 'tertial overhang'. Basically on Lanceolated Warblers the longest tertial is clearly longer than the rest of the secondaries and 'overhangs' them, whereas the longest tertial on a Grasshopper Warbler is of similar length to the secondaries. I did wonder if it would have been useful to know this in my 'stuck moment'! 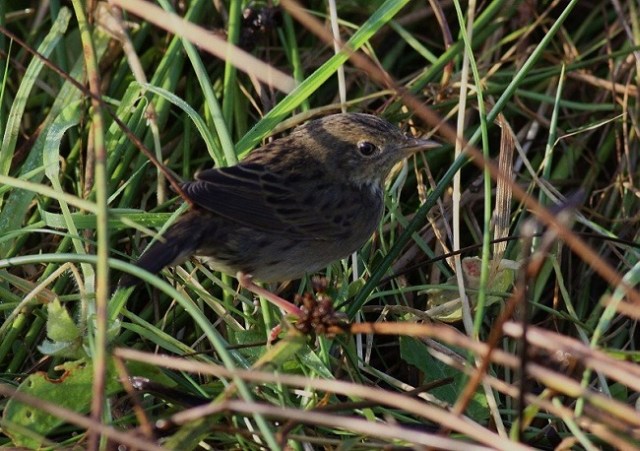 Satisfied we had seen enough we rang the news out, I think around 8:30pm — unhurried, relaxed with beer and good food. Even that night I woke and had to double-check my photos nervously. Had we got it right?

The next morning with sun shining, twitchers arrived and the bird performed. It was dried out, looking pristine, all plumage features visible: a straightforward identification. If only they knew! 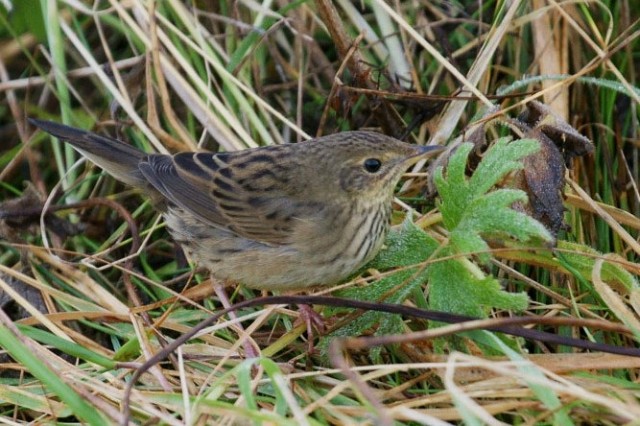 P.S. Even though we are past the peak period for UK vagrants there is still time to find a Lanceolated, with English east-coast records having occurred into mid-November. 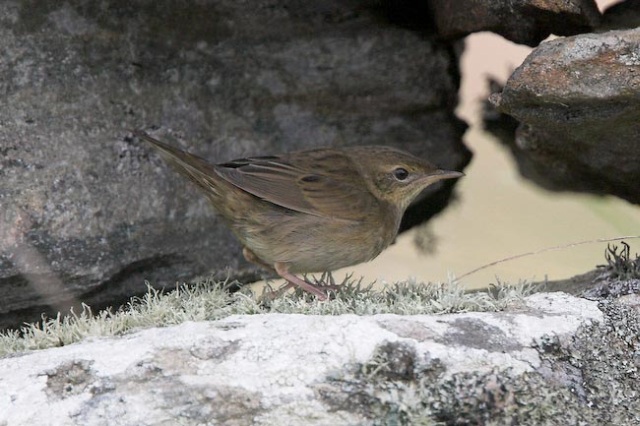 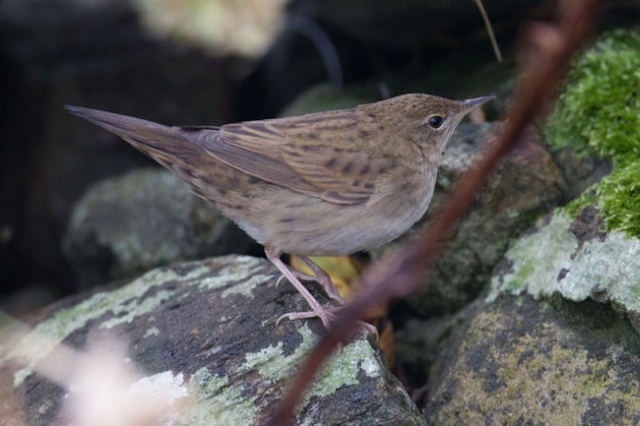 Grasshopper Warbler, Out Skerries, Shetland, 3rd October 2010. There's not much difference in visible plumage characters between this cold-toned Grasshopper Warbler and the Lanceolated Warbler above. The undertail coverts are useful here — but in real life the undertail coverts just remained obscured. The structure of the closed wing holds some good clues. (Photo: Michael Mckee) 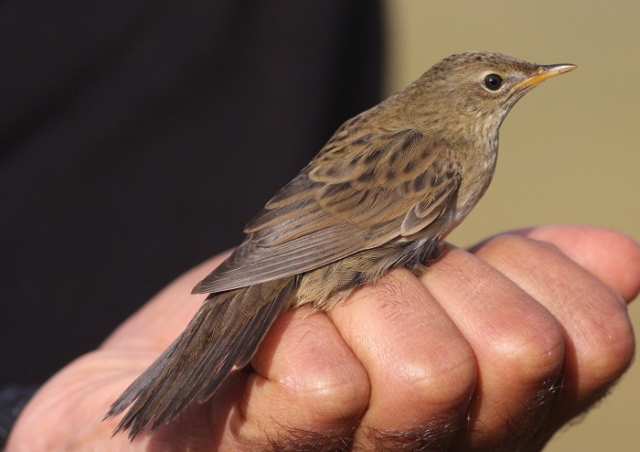 Grasshopper Warbler, Fair Isle, Shetland, 6th October 2010. The primary projection looking as long as the tertial projection is too long for any Lanceolated Warbler, even if the paler tertial fringing is a little on the 'crisp' side. The secondaries also line up with the longest tertials with no obvious tertial overhang as on Lanceolated. (Photo: Tony Blake) 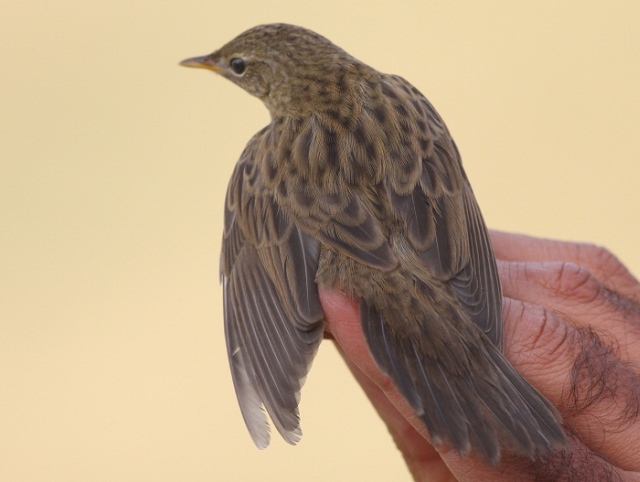 Grasshopper Warbler, Fair Isle, Shetland, 6th October 2010. The tail looks plain and dark compared with the rump and there are pale tips tips to the tail feathers — a weak mimic of some features of Pallas's Grasshopper Warbler. (Photo: Tony Blake)

*Chris Heard on finding Buff-bellied Pipit on St. Mary's — because he wasn't sure yet! (Birding World Vol 1 No.11 page 384)
Written by: Martin Garner 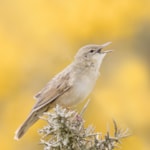 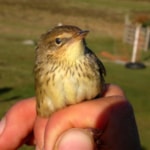