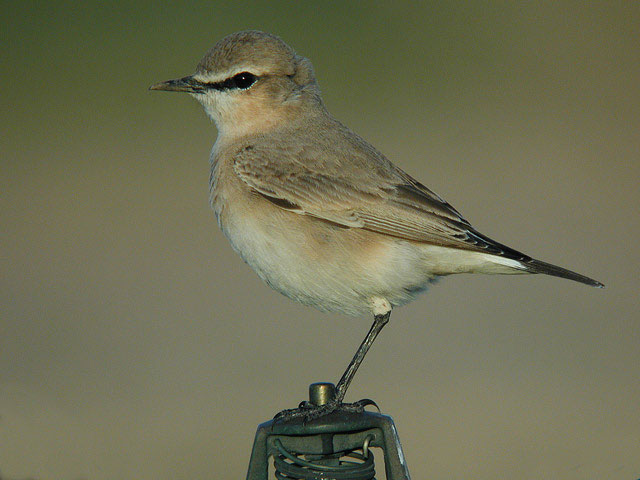 Isabelline Wheatear: UAE, January Truly rare, or simply overlooked? A combination of features helps separate this pallid wanderer from the mercurial Northern Wheatear. The subtle plumage tones make for an engaging subject. Note the dark alula, and broad feather fringes. The supercilium is most prominent to the front of the eye. The eye-stripe varies with changing angles, but tails off behind the eye. The ear-coverts are virtually concolorous with the upperparts (photo: Ian Boustead).

When it comes to subtlety, few birds on the British and Irish list can compare with that exceptional rarity, the Isabelline Wheatear. Those of you who travelled to Carmel Head last autumn to view the bird on Anglesey will no doubt have been very grateful that the hard work had already been done by the identifier, but you may well have been asking 'which one is it then?' even when you knew the bird was present. Isabelline Wheatear must lie near the top of the 'most difficult rarities to identify table', because of the variability of both Isabelline and Northern Wheatears, and the similarities between Isabelline and its much commoner counterpart.

'Issies' are 'birders' birds', highly sought-after by self-finders and complex enough to entertain identification aficionados. Add to that the fact that they're rare, with just 22 accepted British records by the end of 2005 (plus one Irish record), and this superb species will always prove a popular draw — if one chooses to remain for long enough, that is. Whether they're as rare as the statistics suggest is perhaps one for debate; it is highly likely that more occur, but they can be easily overlooked amongst their familiar counterparts.

Breeding from Greece eastwards through to the Gobi Desert, this is a species which many of us will have encountered on travels to southeast Europe or the Middle East. However, identification under baking Turkish skies often appears easier than on a cold windswept coastal headland on an autumn day! Claiming an Isabelline Wheatear is not something to be undertaken lightly, as it requires appreciation of a combination of subtle features to clinch the prize. In reality though, Isabelline can be a very distinctive species, if seen well and with Northern Wheatears with which to compare; pitfalls for the unwary are more often presented by lone birds.

The main identification features of Isabelline Wheatear have been widely discussed in the literature; below is a brief summary of these pointers: 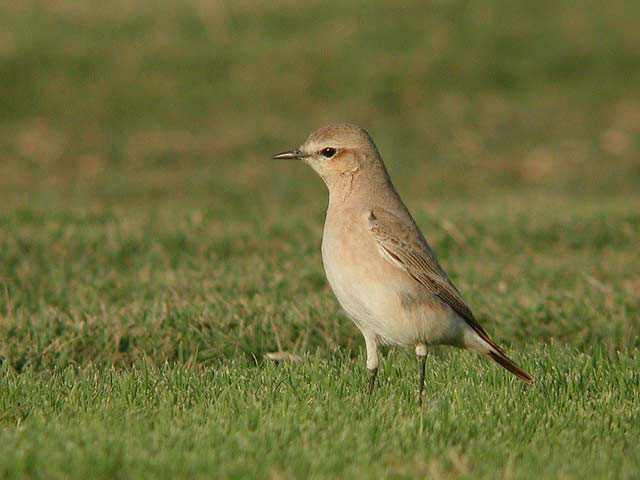 The wing-feathers have broad sandy fringes, with the bases to these feathers greyish-brown, or brown, rather than black, as on Northern. The lack of contrast in the wings makes them appear concolorous with the mantle and scapulars. The dark centres to the median coverts sometimes show through as indistinct 'freckles' near the bend of the wing, but never to the extent of Northern. 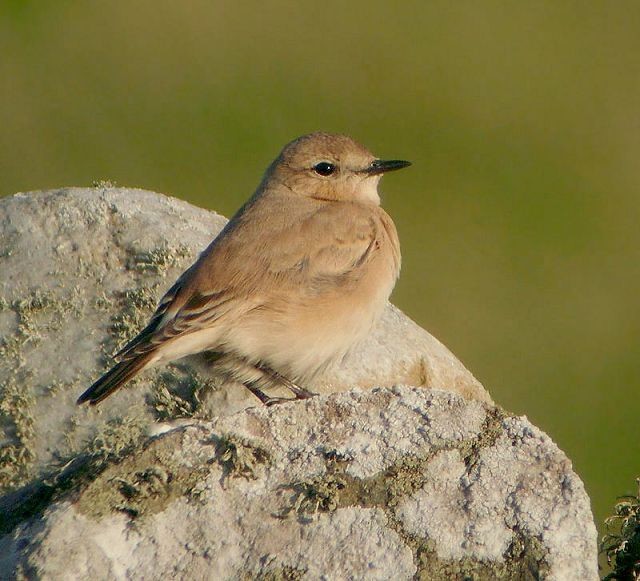 The alula is isolated and dark, contrasting strongly with the pale feathering around it. However, the alula can be difficult to observe, especially when the bird is 'hunched-up'. 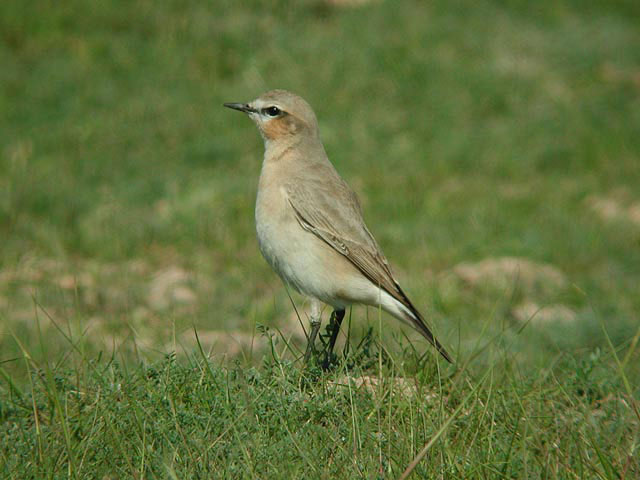 The tertials lack the contrast between the centres and pale edges shown by Northern, and the secondaries have very prominent pale fringes which create a noticeable pale area on the wing (comparable to the 'pale panel' of Icterine Warbler).

The supercilium of Isabelline tends to be whiter and more prominent to the front of the eye, before tailing off above the eye. Northern Wheatears have a supercilium that characteristically 'flares' behind the eye. The dark line across the lores of Isabelline contrasts with the supercilium. The ear-coverts are concolorous with, or marginally darker than, the crown and nape. The prominence of these features can vary though, depending upon light, or the angle of observation, with a 'plain-faced' bird suddenly having a head pattern five minutes later when viewed from a slightly different angle!

There is a reduced inverted 'T' on the tail of Isabelline, such that only a short stub protrudes from the broad black subterminal. This, in combination with the sandy-coloured plumage, can give Isabelline a passing resemblance to Desert Wheatear, especially in flight. Isabelline also shows a restricted amount of white on the rump, as the mantle colouration extends onto the upper rump.

The underwing of Isabelline is a lovely pearly-white, compared to the sullied greyish underwing of Northern Wheatear. However, this feature can be surprisingly difficult to observe, and on one British Isabelline that I found took several hours to observe in flight, but, once seen, was obviously different.

Structural differences between Isabelline and Northern are subtle and require careful evaluation, and, preferably, direct comparison. Judging such 'qualitative features' on lone birds can be tricky. Isabelline tends to be larger, and has longer legs. They also seem to carry a 'beer belly', appearing 'pear-shaped' in comparison to Northern. The bill appears stout and the head larger, with a flatter crown. 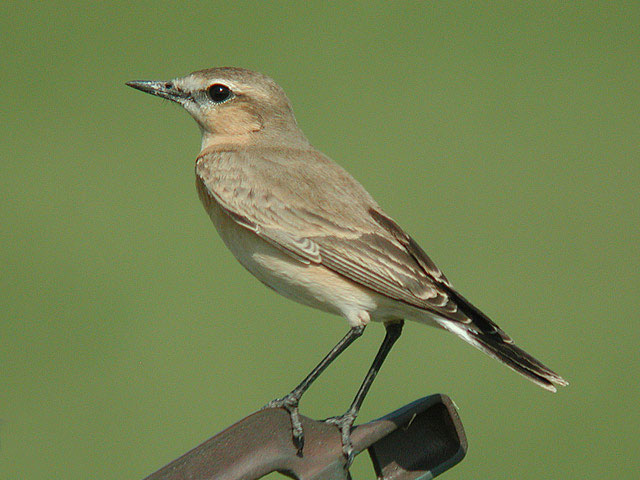 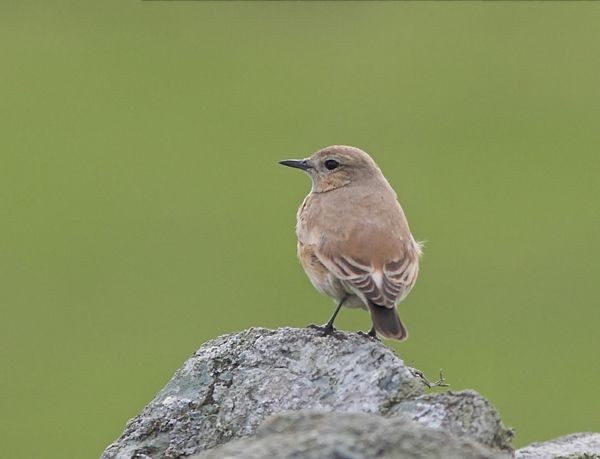 Isabelline Wheatear: Anglesey, September The primary projection is short, and three closely bunched primary tips lie beyond the tertials, then a gap before the next two (photo: Matt Latham).

On the ground Isabelline appears quite long-legged, with an upright posture during pauses. This accentuates the short-tailed appearance, with the tail tip appearing to fall short of the ground such that if it was rotated through 180 degrees it would not catch the surface. The behaviour of feeding birds comprises short running bursts. Whilst these features are useful, they should be used as pointers to a potentially interesting wheatear, and in combination with the structural and plumage features outlined above. 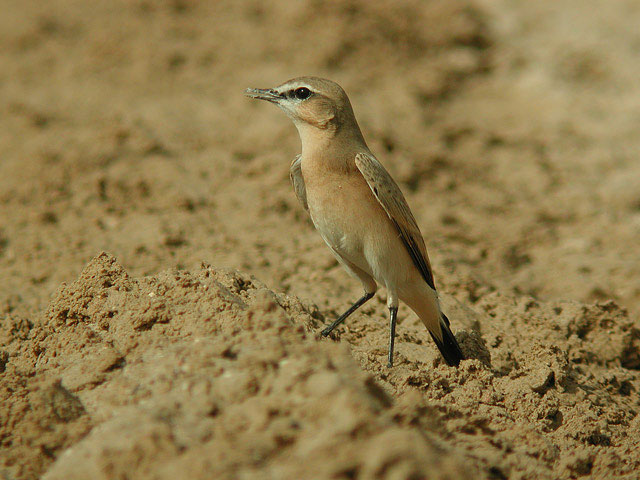 Northern Wheatear is a typically variable species, with both structural and size variation rife. A potential pitfall lies with the larger, longer-legged 'Greenland' Wheatear O. o. leucorhoa, which can also appear paler and shows more black on the tail. Lone wheatears in a British context can be challenging to identify unless all features are noted. Other pitfalls might include Desert Wheatear, which is paler and has a tail which is almost all black.

'Pale' Northern Wheatears also present an obvious pitfall. Leucistic (type) birds do not necessarily have a "washed-out" tail, and can be potentially misleading for finders. For such birds careful scrutiny of the tail pattern and structural, plus plumage, differences should lead to the correct identification as an 'aberrant' Northern Wheatear. 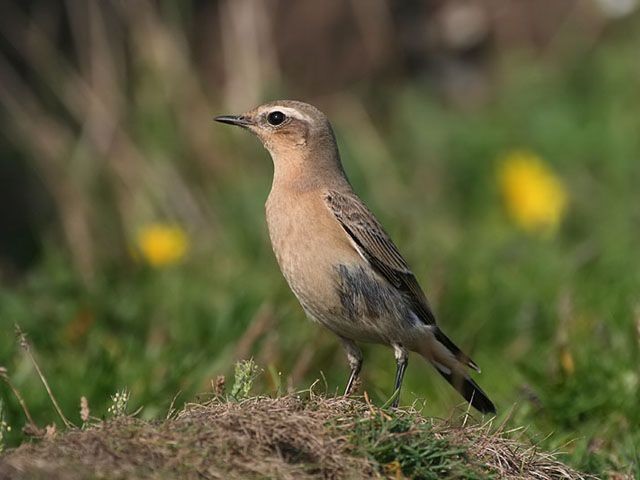 Northern Wheatear: Norfolk, September The supercilium flares behind the eye, and the ear-coverts contrast with the upperparts (photo: Peter Simpson). 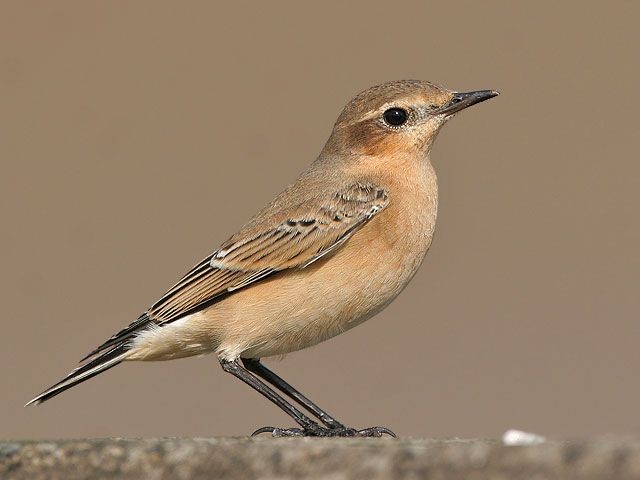 Northern Wheatear: Cheshire, September Northern is a species of warm plumage tones and contrasts. The base colour to the wing feathers is black, rather than greyish-brown (photo: Steve Round). 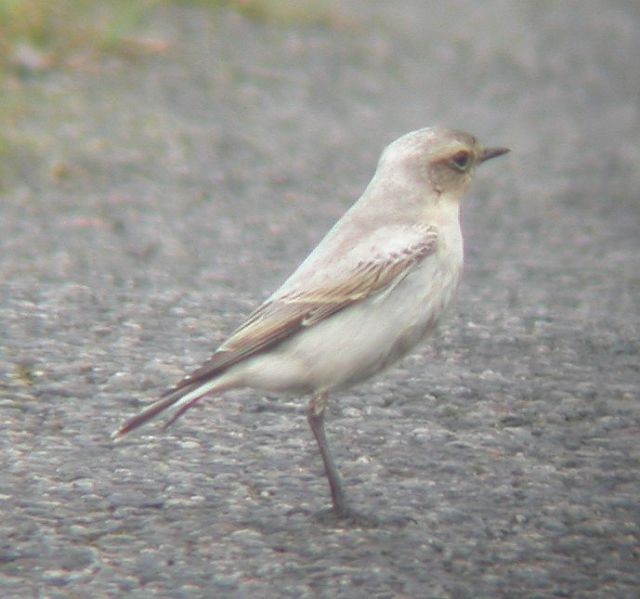 Northern Wheatear: Argyll, September Variability in Northern Wheatears is common and a washed-out bird such as this could invite a pitfall for the unwary. However, despite the pale appearance this bird is clearly not an Isabelline (photo: John Bowler). 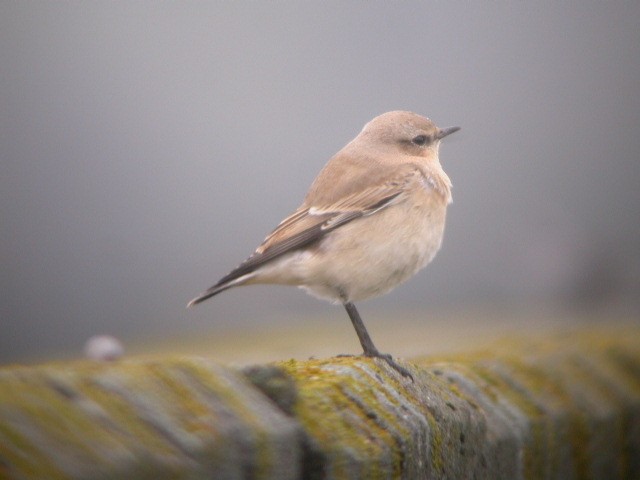 Northern Wheatear: Warwickshire, October Some can look more Isabelline-like than others, but the tell-tale colour contrasts and plumage features are still evident on such birds (photo: Chris Farr). 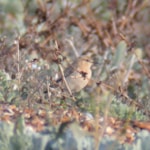