Focus On: in and out of the species bottle – 'the green genie'

A Greenish Warbler present on The Lizard, Cornwall in the last week of October set pulses racing as its identity was debated on internet forums. Could this be the long-awaited second record of Green Warbler for Britain? Following the arrival of the country's first Eastern Crowned Warbler only the week before, "Phyllosc fever" raged amongst the birding community. Many travelled down overnight to Church Cove in the hope that it would turn out to be their second rare Asian Phylloscopus in a fortnight. Green Warbler has only recently been re-split as a species, and another confirmed British record would create a stir.

Reports from the field varied in their emphasis on the brightness of the Cornish bird and also the extent of yellow tones in specific and important areas including the supercilium, face and wing-bars. The effect of light and shade seemed to alter the impression of the bird to observers in the field. However, to most ears it sounded more like a classic Greenish Warbler of the European and west-Siberian race Phylloscopus trochiloides viridanus, and this was confirmed by a sonogram analysis of the bird's calls.

In the Western Palearctic the Green Warbler Phylloscopus nitidus breeds in the Pontic mountains of northeastern Turkey, where they can be seen relatively easily. They are also found in the Caucasus mountains, which stretch from southern Russia through Georgia down to Northern Iran.

There have only been four records of Green Warbler in northern Europe, including a bird identified in the field on the Isles of Scilly in 1983. This bird was discovered on The Garrison on September 29th and stayed until October 4th. Largely due to the uncertain specific status of Green Warbler, there is no official published account of this exceptional occurrence. A finder's article is to be found in the Isles of Scilly Bird Report for 1983 and the record is also documented in Philip Palmer's book First for Britain and Ireland 1600–1999, along with perhaps the only published photograph. More recently, a Green Warbler was trapped in Sweden in the spring of 2003. The Swedish bird's identity was confirmed by DNA analysis! 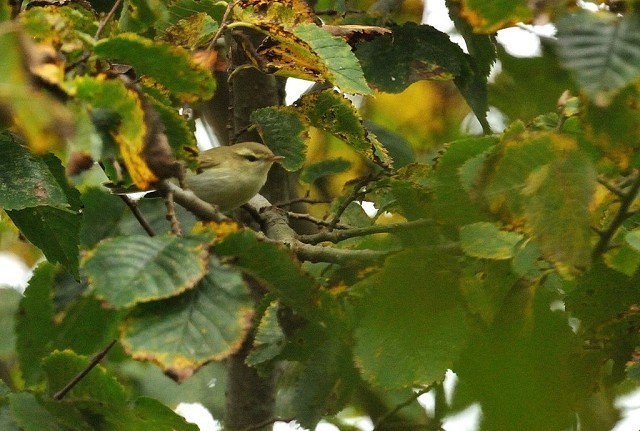 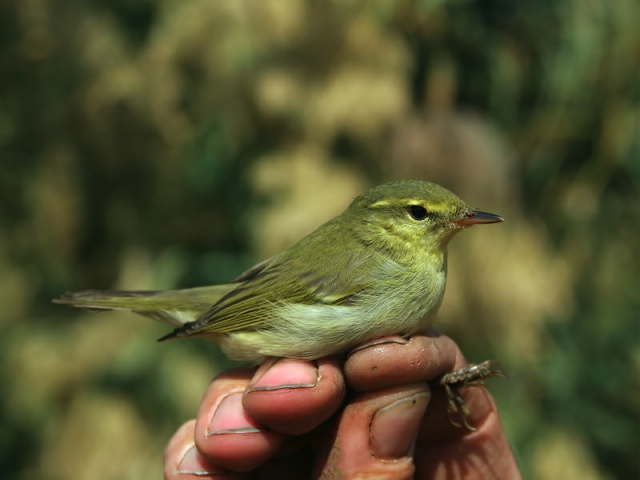 The taxonomy of the Greenish Warbler group is complex, and as a result the status of Green Warbler has turned full circle in the last century.

The Greenish Warbler P. trochiloides group is a ring species complex consisting of five intergrading subspecies inhabiting the forested mountain ranges around the Tibetan plateau. The races, described from west to east, are viridanus, ludlowi, trochiloides, obscuratus and plumbeitarsus. We are used to seeing Greenish Warbler P. t. viridanus, as this is the form which occurs as a vagrant/scarce migrant to Britain and whose breeding range spreads from the Baltic countries of Finland and Estonia across to western Siberia. The easternmost race plumbeitarsus or Two-barred Greenish Warbler has been identified in Britain on four occasions.

Always the odd one out, the Green Warbler P. nitidus is geographically isolated from the rest of the group. The Green Warbler breeds in the Caucasus Mountains from the Black to the Caspian Seas and in northern Iran and Afghanistan. It shares its wintering grounds in southern India with Greenish Warblers of the races P. t. viridanus and P. t. ludlowi. The Green Warbler has only very recently (in 2008) been reinstated as a full species by the BOU. In the previous 70 years Green Warbler has been alternately lumped and split by a series of authors. Now, though, it is considered to be a valid monotypic species.

The eminent ornithologist Claude Ticehurst, co-author of The Handbook of British Birds, published his Systematic Review of the Genus Phylloscopus in 1938. In the review he consolidated Green Warbler with the other five races of Greenish Warbler, though apparently "not without reservation".

In 1955 the famous English ornithologist H G Alexander wrote about the wing-barred Phylloscopus warblers in an article in British Birds. In the paper he suggested that both Green and Two-barred Greenish Warbler might occur in Britain. He also wrote that Green Warbler, earlier lumped (in Ticehurst's synopsis), might be best treated as a separate species.

This treatment was adopted by Charles Vaurie when he produced his mammoth tome The Birds of the Palearctic Fauna published in 1959. In this milestone publication full specific rank was again conferred on nitidus.

Nearly a decade later, in 1967, Kenneth Williamson concurred with Vaurie and in his BTO ringer's guide, The Genus Phylloscopus, he classed the monotypic nitidus as a species under the name of Bright Green Warbler. He also considered it more convenient to treat the Two-barred Greenish Warbler P. t. plumbeitarsus as a separate species. In his List of Recent Holarctic Bird Species, published in 1977, Dutch ornithologist Karel Voous also retained Green Warbler as a species in its own right. Following both Voous and the Russian ornithologist Stepanyan, the Green Warbler continued to be treated as a distinct species by Stanley Cramp and the other authors of Birds of the Western Palearctic in 1992.

Around the same time, however, Svensson in the fourth edition of his Identification Guide to European Passerines again lumped Green Warbler back in with Greenish Warbler group. In the guide Svensson questioned the reliability of separating the two on song and also described other features such as the two forms' calls, behaviour and habitat as almost identical. Following this, the BOU placed Green Warbler, along with Two-barred Greenish Warbler, as subspecies of Greenish Warbler on the British List. A Two-barred Greenish Warbler had also been identified on the Isles of Scilly on St. Agnes in October 1987. The account of this occurrence was finally published in British Birds in 2001 along with a BOU statement of current taxonomical thinking. For many keen birders of that generation three ticks soon became one!

Svensson subsequently gave Green Warbler a fair re-evaluation in the Collins Bird Guide, published in 1999. After suffering a variety of treatments in various field guides and checklists, the status of Green Warbler was again revisited by the BOU in 2002. Despite acknowledging its allopatric range, genetic differentiation and distinct morphology, they decided that the taxon didn't fulfil their diagnosable requirements as a species. Late in 2003 more noises came from the BOU whilst investigating the specific status of taxa within the Greenish Warbler complex. They wrote then that there was "currently insufficient evidence to recognise Green Warbler or Two-barred Greenish Warbler as separate species." Therefore as a consequence no changes to their classification was recommended!

Birders who had seen the Scilly duo had given up hope by now, and most will have missed the lifeline thrown by Martin Collinson of the BOU in 2006. In an article in British Birds under the title "Splitting Headaches" he conceded that there were "strong arguments that this taxon, Green Warbler, was fully diagnosable and that it may merit specific status."

Things then went quiet until, in September 2008, the BOU produced further recommendations in the fifth report of their Taxonomic Sub-Committee. The authors, who now included Lars Svensson, concluded that the plumage characteristics of Green Warbler were now confirmed as being diagnostic and that the song was generally distinct from that of Greenish Warbler. A complete turnaround had occurred in the species' fortunes and the "Green Genie" was once again out of the bottle! 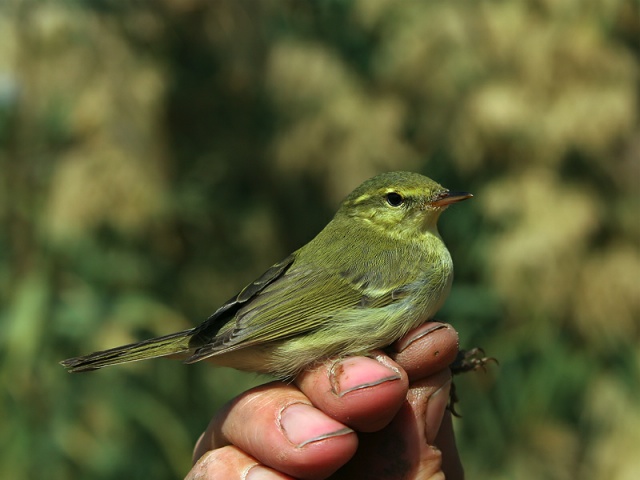 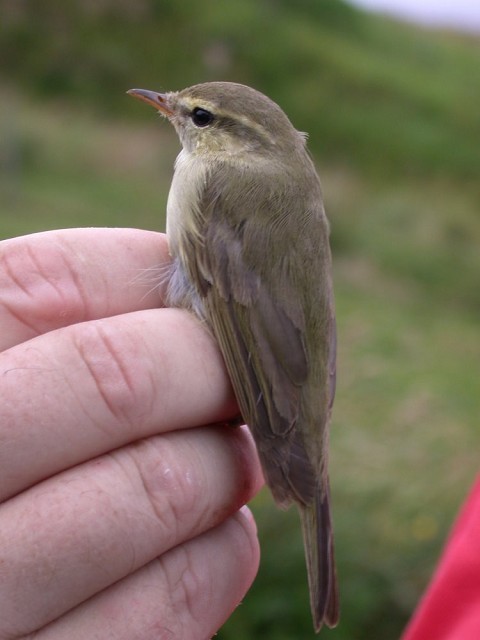 In comparison to Greenish Warbler the Green Warbler is slightly larger, with, on average, longer wings and a larger, sturdier bill. The upperparts of a typical individual are a bright green, similar to Wood Warbler in tone. Birds in fresh plumage exhibit a diagnostic strong yellow wash to the throat and the breast with the yellow continuing onto the flanks and the undertail coverts. However, this feature is subject to wear, and some birds in Green Warbler populations appear to lack this yellow wash.

The supercilium is long, becoming broader behind the eye, usually with a terminal flick. As a rule, the supercilium starts at the bill base but does not usually reach onto the forehead as it does in Greenish Warbler. The supercilium is yellow and tends be brighter in tone in front of the eye. A yellow wash is also found on the cheeks, which are plain and not distinctly marked (therefore similar to Greenish Warbler). The yellow suffusion in both the supercilium and cheeks creates a softer facial appearance in Green Warbler. There is less contrast and the eye-stripe becomes less prominent.

The greater covert wing-bar is prominent and tends to more distinctive than that found on Greenish Warbler, but not as pronounced as in Two-barred Greenish. The wing-bar is more distinctly yellow-toned in fresh plumage. Some individuals can show a trace of a second wing-bar on the median coverts.

Therefore a typical individual is a striking-looking green and yellow warbler. However, worn individuals and duller-plumaged birds can appear inseparable from Greenish Warbler.

Observers with experience of the two species on their wintering grounds cite the larger bill of Green Warbler as a good separation feature. The bill is longer with an all-pale lower mandible in many Green Warblers, whilst Greenish Warblers tend to have a smaller bill with a more extensive dark tip to the lower mandible, thus making the bill less prominent.

The Green Warbler identified in the field on St. Mary's, Isles of Scilly in 1983 was a typical individual. The original observers realised it was something unfamiliar and several features lead them to identify it as nitidus. The bird was bright green above with striking yellow underparts and had a yellow supercilium and wing-bars. The call it gave was similar to Greenish Warbler but more drawn out, and was transcribed as a trisyllabic note "ser-wee-u". 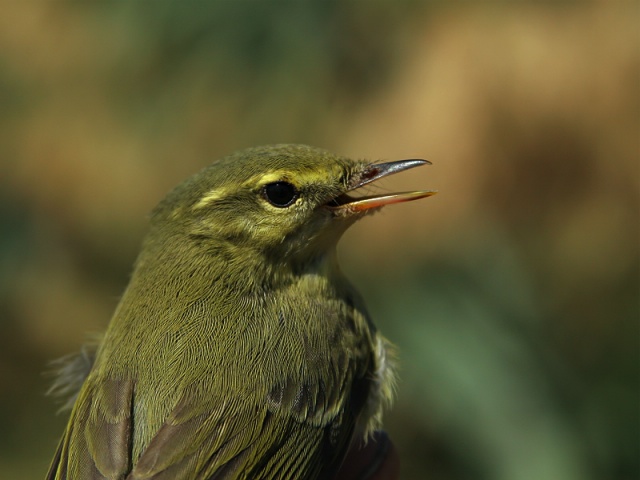 Although the contact calls of both species are very similar, to the experienced ear they are separable. Both calls have the tonal quality of a Pied or White Wagtail and transcribed simply they both give a piercing "Chi-wee".

Greenish Warbler's call is distinctly disyllabic, but slightly weaker and delivered at higher pitch than Green Warbler. To many ears, Green Warbler's calls are trisyllabic with a more rolling quality. Obviously individual birds will vary their calls in response to external factors, but the constant differences hold true.

There is an excellent article on the vocalisations of green warblers (including sonograms and calls) on the Dutch Birding website.

The celebrated Irish ornithologist William Brooks, 1828-1899, was very active in the field in India in the latter part of the 19th century. Brook's Leaf Warbler Phylloscopus subviridis is named after him: the species is more easily separated from the similar Hume's and Yellow-browed Warblers by its call. He was convinced that amongst the Phylloscopus warblers each species, or race, had a distinctive call. These diagnostic calls, he suggested, were an essential aid to recognition. Nearly 150 years later this "sound approach" holds true and Brook's perception has been proven to be correct. But even for the modern-day observer, reliance on the use of eyes and ears alone may lead to confusion. The use of sound-recording equipment and digital cameras has become an integral part of field birding.

It is all about individual perception, and the Green Warbler story is a lesson in this. One of the new skills of birding is how to harness this knowledge and to read the clues provided by ever-improving technology.

We'd like to thank Yoav Perlman for allowing us to use his Green Warbler photos. 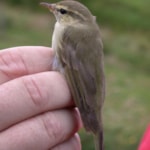 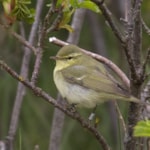 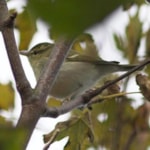