Focus On: identification of Cape Gannet 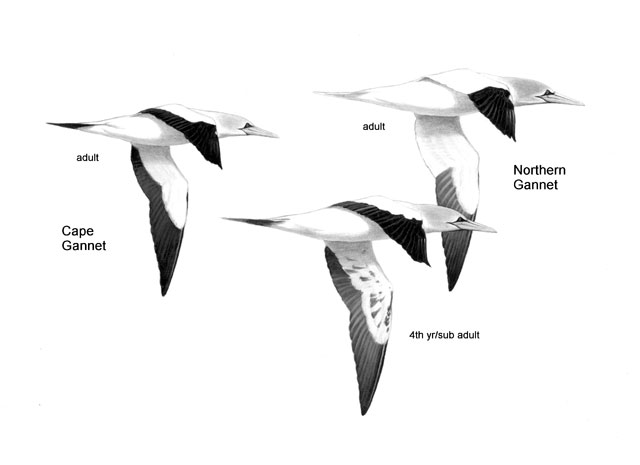 The Cape Gannet has flirted with the British List for decades. A specimen said to have been taken on the Bass Rock, Lothian in May 1831 was recently rejected by the BOURC. While the identification of the bird in question is not in doubt, the possibility of the bird having been imported from abroad could not be ruled out. More recently the awareness that some Northern Gannets could, in sub-adult plumage, appear very similar to adult Cape Gannet, resulted in a complete cessation of claims.

Unfortunately the identification discussion did not focus on the underwing pattern, which is much more reliable in distinguishing sub-adult Northern Gannets from adult Cape Gannets. This southern oceans wanderer surely remains a highly likely vagrant, and in the light of the more recent occurrences of Yellow-nosed Albatross and Masked Booby, the Cape Gannet deserves to be back on the radar of keen seawatchers throughout northwest Europe.

Cape Gannet Morus capensis breeds on six islands on the west and south coasts of South Africa and coastal Namibia between 25° and 35°S. There is also a very small population on St Paul Island in the Indian Ocean, where Australian Gannets Morus serrator also occur. The normal winter range extends up the west coast of Africa north to the Gulf of Guinea and on the east coast regularly north to Mozambique.

While its normal range is south of the equator, the Cape Gannet is a true oceanic wanderer. It has been recorded on several occasions from Australia, New Zealand, the Indian Ocean, Argentina, Brazil and, more recently, an amazing record of a bird photographed in July 1999 off Northern Peru (Garcia-Godos 2002) and another from Oman in March 2004 (Eriksen 2004). The species is firmly on the Western Palearctic list on the basis of a ringing recovery of a first year bird at sea off Western Sahara in 1966 at 21°40' N, which is not far south of the Canaries! There have also been a number of claims from Spain, although only one, a record from the Mediterranean 30 km east of Tarragona in January 1985, is currently accepted as indeterminate Australian/Cape Gannet (de Juana et al. 2001). The awareness in the late 1980s/early 1990s that some near-adult Northern Gannets could mimic the plumage of adult Cape Gannet (see Paterson and Riddiford 1990) resulted in a cessation of claims of Cape Gannet in European waters. However when you add together the ringing recovery, the far-flung vagrancy patterns of Cape Gannet and the likely mixing of Cape and Northern Gannets off Western Africa, it remains a very likely vagrant.

For all ages and plumages there are other features which facilitate positive identification. The most important of these is the length of the gular stripe - the strip of bare black skin running through the chin and throat. On Cape Gannet this is three to four times longer than in Northern Gannet. Amazingly close views would be required to see this feature on dark-headed immatures, although in second- or third-calendar-year birds. when the head becomes whiter, the gular stripe should be visible and thus in the right conditions some sub-adult plumages of Cape Gannet could be identifiable in the field. Note that whereas Northern Gannets take 4-5 years to reach definitive adult plumage, Cape Gannets take 3-4 years.

A potentially useful feature to help identify Cape Gannets is their (on average) slightly smaller size, which is likely to result in them having a slightly 'flappier' flight action or at least a different flap/glide sequence to any accompanying Northern Gannets. A critical examination of flight action should also reveal that in direct travelling flight gannets have the habit in most weather conditions of tilting their body first one way and then the other. This means that the birds regularly bank in such a way that the underside of the far wing is visible and could crucially indicate the presence of a fly-past adult Cape Gannet. Practice in watching gannets in direct flight and assessing the potential of seeing the patterning in the underwing coverts may prove fruitful.

First-calendar-year birds are the most likely to occur as vagrants as this is the age at which birds disperse most widely (Snow and Perrins 1998). The ringing recovery off Western Sahara was a first-year bird. This age can only be currently identified by observation of the length of the gular stripe and with biometrics. Dead or dying immature Gannets are always worthy of careful scrutiny!

Once the head becomes whiter in the second and third calendar years the diagnostic longer black gular stripe becomes visible. Thus any older immature Gannet, which may have at least attracted initial attention by its smaller size or more flapping flight, should be scrutinised for this feature. To confirm the identification very close views would be required to see the gular stripe.

Again, the diagnostic feature is the longer black gular stripe. This probably needs to be seen to establish a confirmed sight record. However an individual adult Cape Gannet could well attract attention long before the black gular stripe is seen.

Compared to Northern Gannets adult Cape Gannets have black secondaries (apart from the innermost, which are white) and usually an all-black tail. According to Marchant and Higgins (1990), 89% have an all-black tail, and 11% show one or more white outer tail feathers. The confusion in the North Atlantic is caused by near-adult Northern Gannets that have retained black secondaries and some black tail feathers which superficially resemble adult Cape Gannets. However immature Northern Gannets, even those very close to full adult plumage, retain the presence of some dark feathering in the underwing coverts even when all of the upperwing coverts appear essentially white.

Differences in the timing of moult between the two species may assist with identification of adults. Northern Gannets complete primary moult from July-September (February) whereas Cape Gannets moult from January(?) to June/July (Snow and Perrins, 1998). Given that the biological clock of a vagrant Cape Gannet in the North Atlantic is likely to be in sync with the austral summer its state of moult, notably primary moult and body moult affecting colouring on the head, may contrast with accompanying Northern Gannets.

As for all ages, the potentially useful feature of smaller size and more flapping flight of Cape Gannet may also add to a positive identification.

Cape and Australasian Gannets have hybridised and the identification of the two species, as well as appearance of hybrids, is well covered in Robertson and Stephenson (2005). 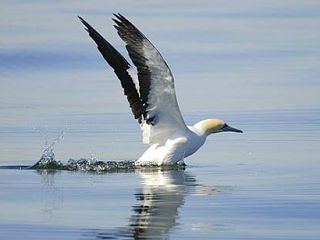 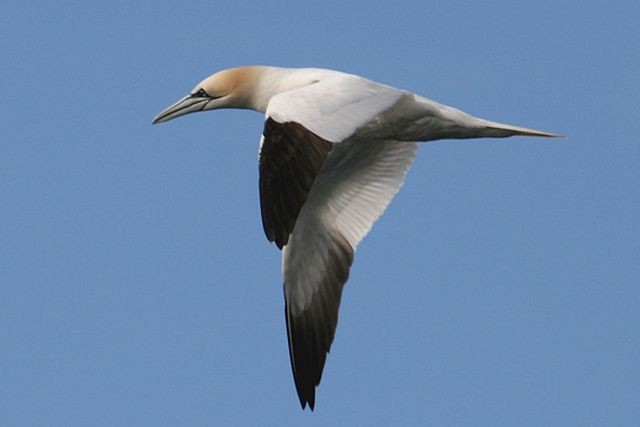 Northern Gannet: Fife, July. A key feature to concentrate on when faced with a potential Cape Gannet would be flight action and wing and tail pattern - also hope that it comes close enough for a good look at the gular stripe!(photo: Ted Sewell) . 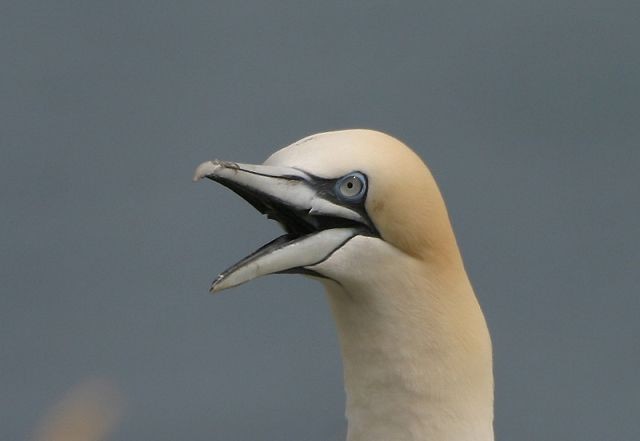 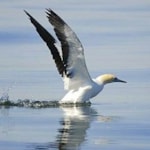