Focus On: Brambling or Chaffinch? 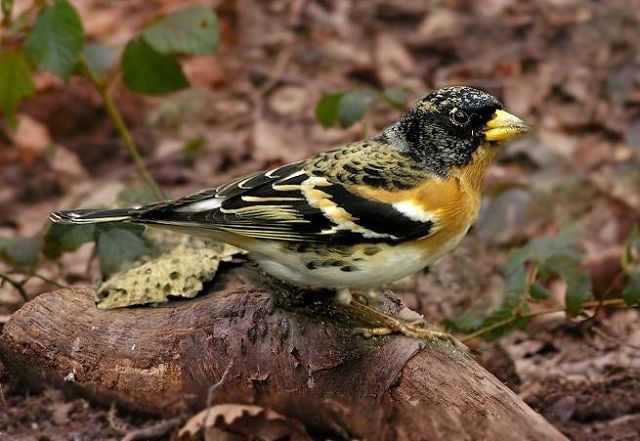 Brambling: This male, photographed in early March, is starting to acquire summer plumage. The black of the head and mantle are quite prominent, making for a mottled appearance. The bill is straw-yellow - a summer-plumaged male would have a black bill. The dark spotting on the flanks is quite apparent on this individual (photo: John Robinson).

The beautiful Brambling is similar in size and shape to the Chaffinch. In all plumages they can be told from each other by the white rump and almost all black tail of the Brambling. As with Chaffinch there are striking markings on the wings, but these are rusty-buff in colour. The breast is orange, more intense on males, and, in winter, the bill is straw-yellow with a dark tip. The blackish head has pale fringes in the winter season too, making males look quite mottled in appearance. Females are drabber with a greyish-brown head and grey sides to the nape. The orange breast is duller than on the male, but immediately separates her from the female Chaffinch. On both sexes look for the dark spotted flanks - these are absent on Chaffinch. Also, the white belly on Brambling can be useful for birds facing you in a bush or flying over. 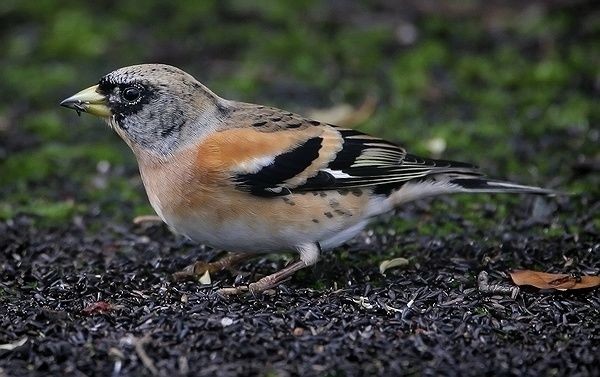 Brambling: This male in November is a paler, but still striking, individual (photo: Sean Gray). 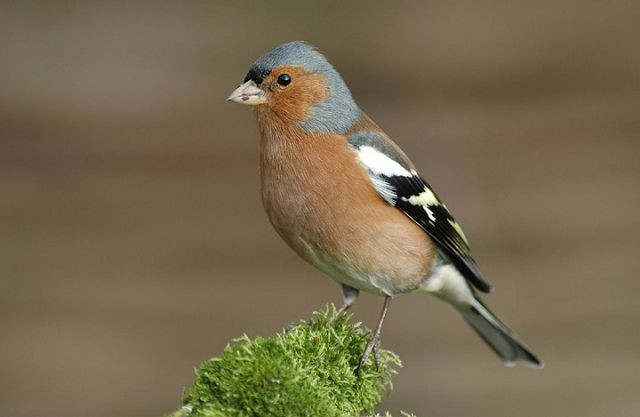 Chaffinch: Males are quite different to Brambling and are instantly recognizable (photo: John Dickenson).

They are more often heard before they are seen and it is a good idea to learn the calls of both species. Brambling has a distinctive nasal call which, once learnt, is often the first clue to their presence overhead or in nearby trees. It is described as a 'te-ehp'. There is also another flight call, a 'chuk chuk'. Learn these and I can guarantee that you'll never miss out on a fly-over Brambling ever again!

A very rare breeding bird in Britain, Bramblings are winter visitors from their northern breeding grounds, with the Fennoscandian population starting to move south and southwest in early September, corresponding to the coastal arrivals here in mid-September. They can be a familiar bird to coastal watchers during the autumn, especially in the few hours from dawn onwards when small flocks pass overhead, some occasionally pitching down, before they're on their way again. Departure from wintering areas is largely complete by early spring, though some stragglers may remain into April and early May, at which time the males start to look particularly gaudy.

Wintering numbers vary and are found in a variety of habitat types. During the winter months they often consort with finch flocks and can be found on stubble fields and woodland edges. A good area to look for this lovely finch is in beech woods where they find their favourite food - beech nuts; in years when beech mast is plentiful they can sometimes form large flocks. They can also be attracted to gardens during the winter months, where they associate with the more familiar Chaffinch. 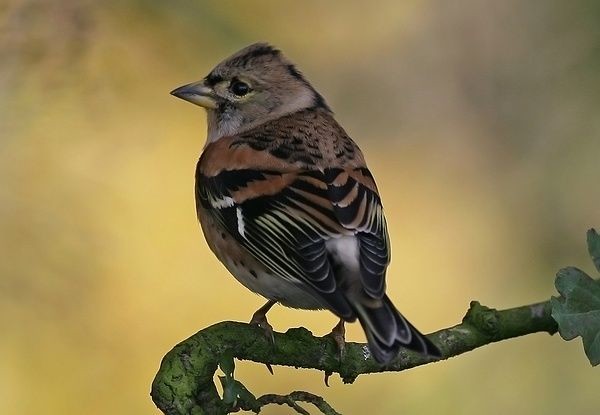 Brambling: A key feature for the identification of Brambling from Chaffinch is the white rump and all dark tail (photo: Sean Gray). 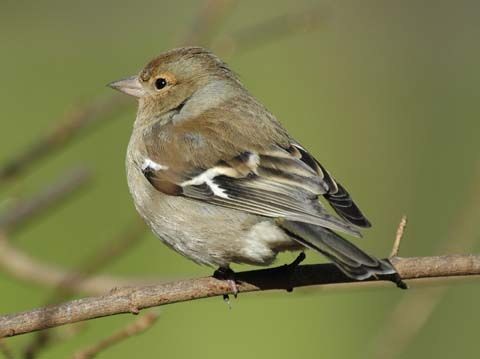 Chaffinch: The white tail sides are difficult to see at rest, as can be the colour of the rump, but look for these features in flight. The upperparts are grayish-green, lacking the contrasts of Brambling (photo: John Dickenson).

The familiar Chaffinch is one of our commonest breeding birds. In flight it lacks the white rump of the Brambling and has obvious white sides to the tail and a flash of white in the wings. The male has a rusty-red underparts and sides to the head. The crown and nape are bluish-grey and the mantle reddish brown. The female is much less colourful, being greyish-white below and greyish-green on the upperparts. Unlike Brambling the flanks are unmarked - a useful feature to look for on birds feeding on the ground, or perched in trees.

As with Brambling then learning the calls is helpful. Perched birds utter a distinctive 'fink' and in flight the call is a soft 'yupp'. Both calls are markedly different from the Brambling and once learnt you'll be able to separate individuals of both species from overhead flocks.

Present all year, this is a common breeding and wintering bird. It can be found across most habitat types, from woodland to farmland to gardens and parks. In winter our numbers supplemented by migrants from northern Europe. At this season it often forms flocks with other finches out on winter stubble. These are always worth looking through as they can sometimes contain Bramblings. 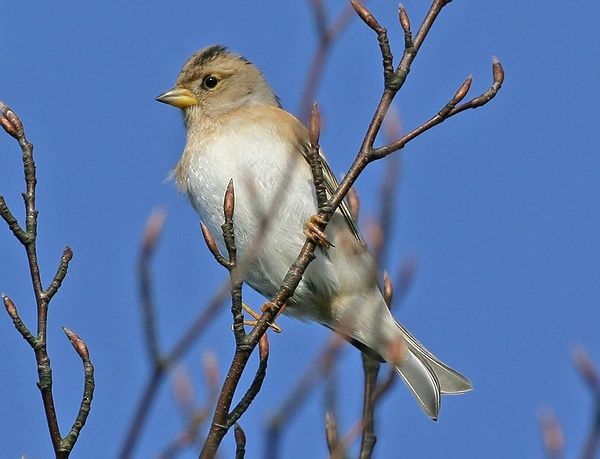 Brambling: In such a view this female resembles a Chaffinch. However, you can just make out the orange wash across the breast and the white belly is a good feature, but more usefully the yellowish bill clinches the identification (photo: Sean Gray). 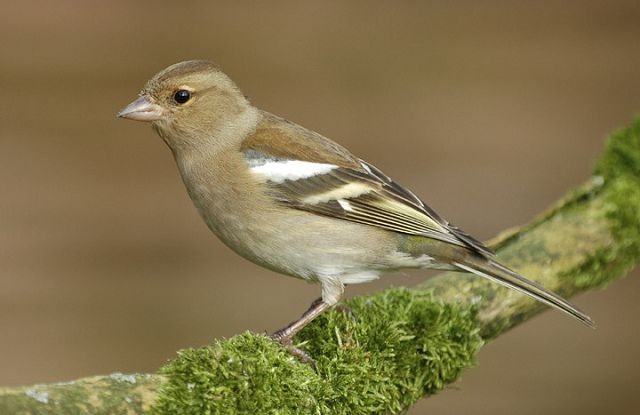 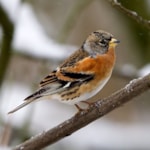