Since 2010, a small team of British and Mallorcan researchers have been deploying tracking devices on the critically endangered Balearic Shearwater, with the aim of identifying their migration routes and preferred feeding areas in order to inform targeted conservation action. Background information, together with a full account of the 2011 expedition and links to the 2010 expedition, can be found in Part I and Part II. 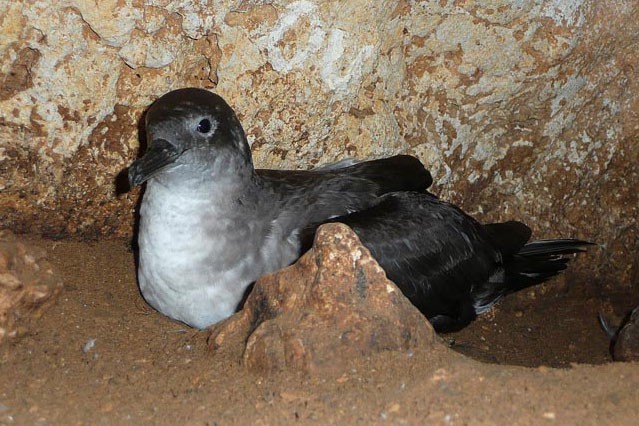 In spring 2012 and 2013, we undertook further expeditions to the Balearic islands to continue and expand this research. As with previous years, the focus was on the large Balearic Shearwater cave colony at Sa Cella, Mallorca, but work also continued at La Mola, Menorca, home to a colony of Yelkouan-type 'Menorcan' Shearwaters. Here, we provide a progress update on our efforts to find out more about these highly threatened seabirds.

We now have three years of geolocator (GLS) data, providing a comprehensive overview of the at-sea distribution and behaviour of breeding birds from Sa Cella. Most breeding adults migrate out of the Mediterranean and spend the post-breeding period (July–Sept) off west Iberia, with a few birds penetrating north to the coasts of northern Biscay. The first year of GLS data were published in the open-access journal PLoS One, and subsequent years of data will be analysed to assess inter-annual variability in migration routes and foraging areas. It will be fascinating to see whether individual breeding birds follow the same routes and visit the same foraging areas every year, and whether males and females stay together or visit different areas. The data are also being used by colleagues in Spain, Portugal and France to identify important feeding areas for the species that could be targets for spatial protection measures, e.g. Important Bird Areas (IBAs). 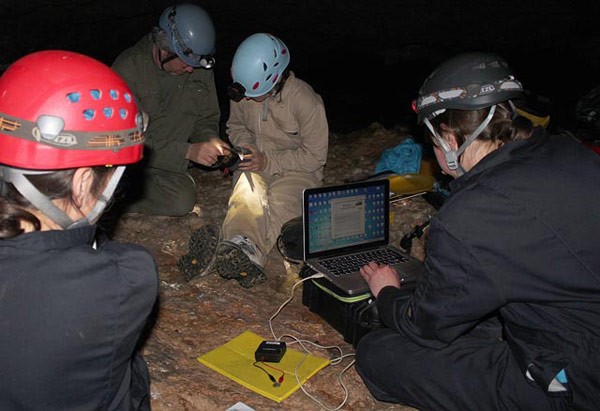 The project team downloads data from a geolocator recovered from a Balearic Shearwater at Sa Cella (Photo: Russell Wynn)

In addition, thanks to funding from Natural England and RSPB, 40 GLS devices were deployed on fledgling Balearic Shearwaters at Sa Cella in June 2013. The aim of this work is to try and identify where young Balearic Shearwaters go in their first three years, before first breeding. It is possible that the large numbers of Balearic Shearwaters visiting northwest France and the southwest UK in recent years are dominantly immature non-breeding birds, as our tracking data suggest that very few, if any, of our tagged breeding adults visit these areas. The tiny GLS devices should stay on the young birds and continue logging data over the next two or three years, and we hope to recapture a proportion of these birds when they return to the cave in the future (metal ringing data indicate that many Sa Cella fledglings have subsequently returned to breed there). At the time of writing, we have already received two exciting reports of birds carrying geolocators off the Isles of Scilly (on 28th July and 3rd August), including one that was photographed and identified as a juvenile from Sa Cella. 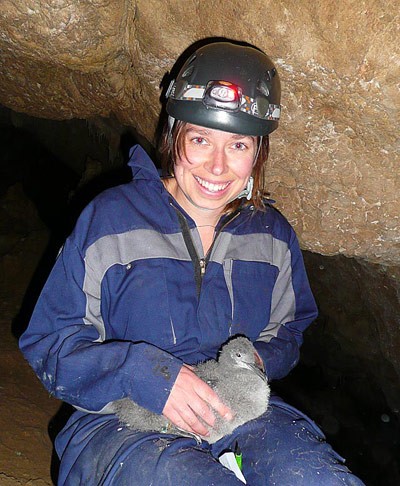 Rhiannon holding a fledgling Balearic Shearwater at Sa Cella; a newly deployed geolocator is just visible on the right leg of the bird (Photo: Alice Jones) 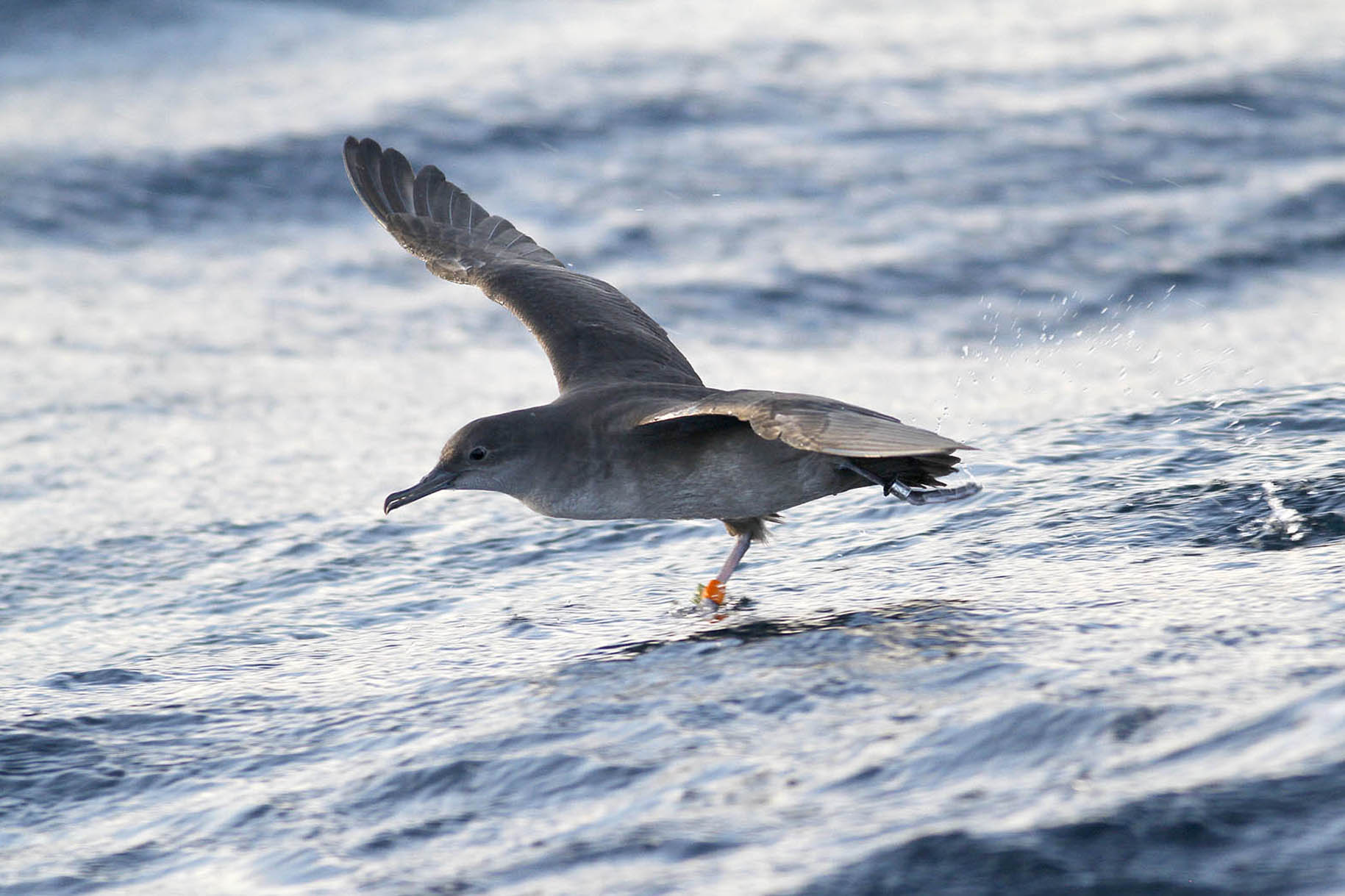 Balearic Shearwater photographed off the Isles of Scilly on 28th July 2013; the Darvic ring position and colour indicate it is one of the juveniles tagged at Sa Cella in June 2013, just a few weeks previously. This is the first direct evidence that juvenile Balearic Shearwaters are visiting UK waters (Photo: Joe Pender)

We now have three years of high-resolution GPS data, derived from tags attached to the backs of Balearic Shearwaters during their foraging trips (of several days' duration) in the incubation phase. This is helping us to track accurately where the birds go to feed during this crucial part of the breeding season, why they use the areas that they do, and how they navigate to and from these foraging sites. Detailed information on daily activity patterns (roosting, flying, foraging) are also being obtained. Some of these data have recently been shared with colleagues at Barcelona University, who are compiling GPS data from several Mediterranean seabird species to identify where interactions with commercial fisheries occur. This is enabling them to target potential mitigation measures for seabird bycatch, which is one of the major threats to the Balearic Shearwater. 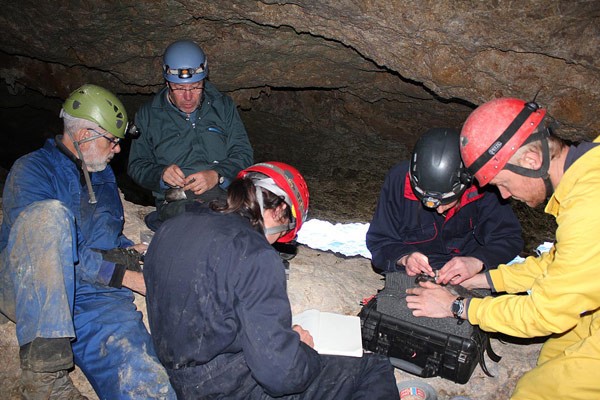 A small number of Time-Depth Recorders have also been deployed at Sa Cella, together with GLS and GPS tags. These tiny devices provide information on the depth to which the birds are diving during foraging — initial results indicate that some Balearic Shearwaters are capable of diving to depths in excess of 20 metres! These combined deployments mean that diving behaviour can be related to geographic location and, potentially, commercial fishing activity, which may provide insights into foraging behaviour around fishing vessels. 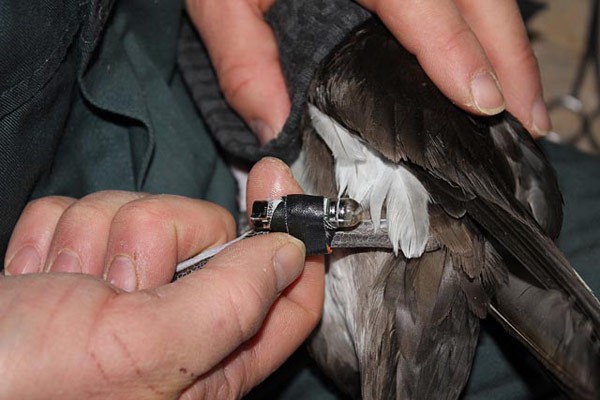 A Time-Depth Recorder attached to the leg of a Balearic Shearwater (Photo: Russell Wynn) 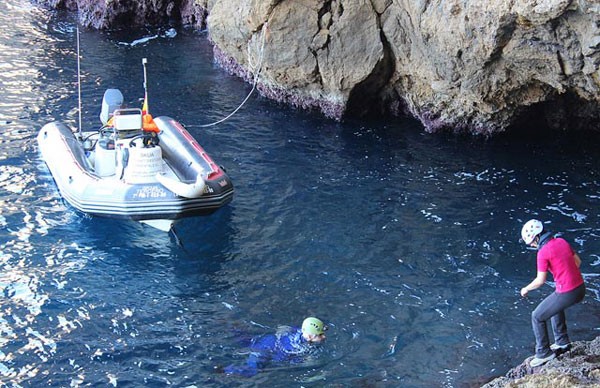 Shearwaters are not the only accomplished divers at Sa Cella! Here, Miguel retrieves the rib (our only way of exiting the cave) after one of its tethers came loose. He didn't even have time to take his helmet off! (Photo: Russell Wynn)

We are also undertaking stable isotope analysis of Balearic Shearwater blood and feathers, in collaboration with Dr Steve Votier (University of Plymouth) and Dr Clive Trueman (University of Southampton). Stable isotope data provide information on the shearwaters' diets, which, when combined with geographic data derived from tracking devices, allows us to study the potential feeding of birds on fisheries discards, and their vulnerability to bycatch in fishing gear in different areas. 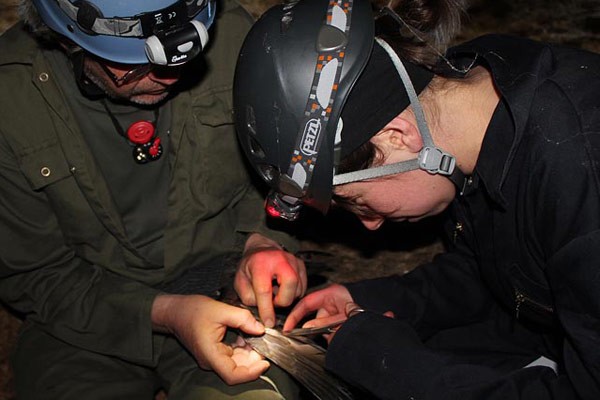 We deployed Reconyx infrared trail cameras in Sa Cella in 2012 and 2013 in order to assess the birds' behaviour at the nest. This has provided us with probably the first ever images of Balearic Shearwaters mating at the nest, together with a range of other fascinating behaviours in this totally dark environment. By mounting cameras adjacent to nests of birds with and without tracking devices, we can also assess whether the devices are having an impact on the birds (both immediately after handling and while the birds are incubating the egg). 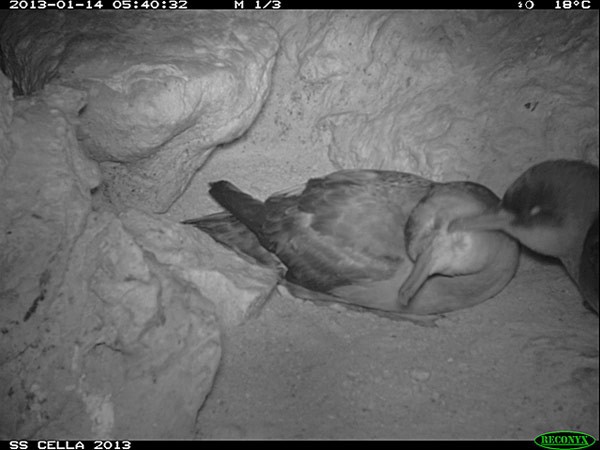 Balearic Shearwaters preening at the nest in Sa Cella. A video clip showing more preening and pair bonding can be viewed on YouTube (Photo: Miguel McMinn) 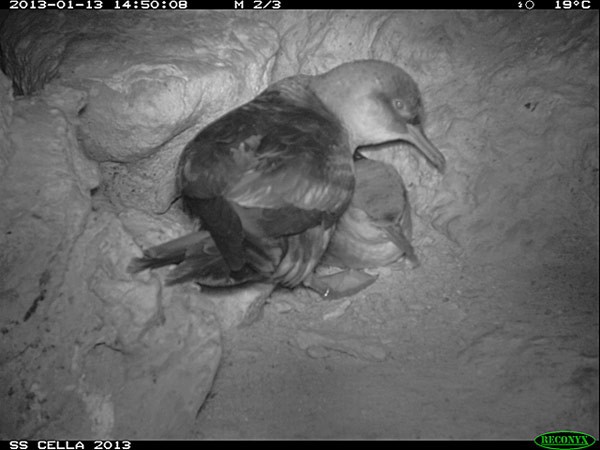 Balearic Shearwaters at the nest in Sa Cella. A video clip showing mating and other bonding behaviours can be viewed on YouTube (Photo: Miguel McMinn)

We have continued to work on Yelkouan-type shearwaters at La Mola on Menorca. A total of 20 GLS have been deployed on these 'Menorcan' Shearwaters since 2010, but work at this colony is hindered by the presence of numerous predators (rats, cats and Peregrine Falcons), meaning that nesting shearwaters are mostly in inaccessible deep burrows. However, following a lot of hard work and persistence by the project team, we have managed to recover a very small number of GLS devices from returning birds in 2012 and 2013. The initial results are surprising, and are revealing significant differences in migration strategy between birds from Mallorca and Menorca. We are keeping BOU informed about these results (they are currently assessing the first British record of Yelkouan Shearwater), and intend to publish one or more papers on these results in the next 12–24 months. 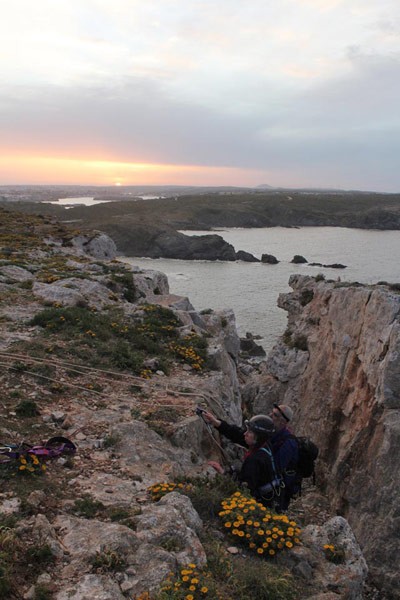 Rhiannon and Miguel abseiling down to the colony at La Mola (Photo: Russell Wynn) 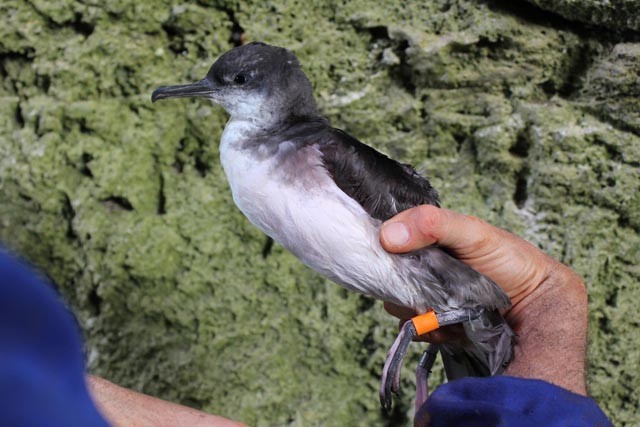 A 'Menorcan' Shearwater at La Mola, Menorca; in the hand these birds look more like Yelkouan than Balearic Shearwaters (Photo: Russell Wynn)

In early 2011, the Balearic Island government co-ordinated a rat eradication programme on Sa Dragonera, the island off northwest Mallorca where our fieldwork base is located — details can be found here. This programme appears to have been successful, with no confirmed rat sightings in the intervening two years. In order to assess the impact on breeding Balearic Shearwaters, a census of the island was established in spring 2013, spearheaded by Greg Morgan (RSPB warden on Ramsey Island, Wales). A series of census plots were identified, and the numbers of occupied burrows established through visual confirmation or tape playback. Greg has recently submitted the results of this work to the Seabird Group journal, Seabird. A small number of GLS were also deployed on shearwaters from Sa Dragonera, discovered during this census work, to test whether birds from this island have the same migration strategies as those from the Mallorcan mainland and Menorca. 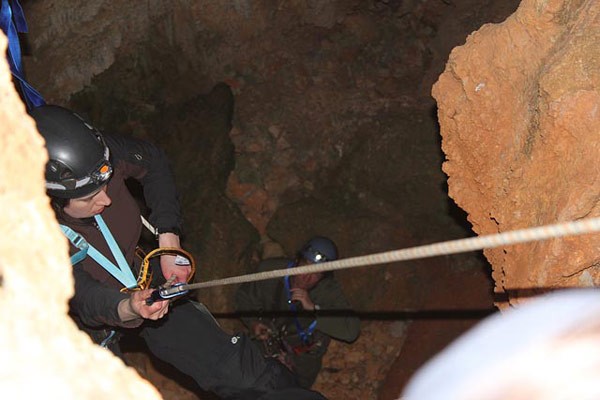 Rhiannon abseils into a cave on Sa Dragonera, supervised from below by Tim (Photo: Russell Wynn) 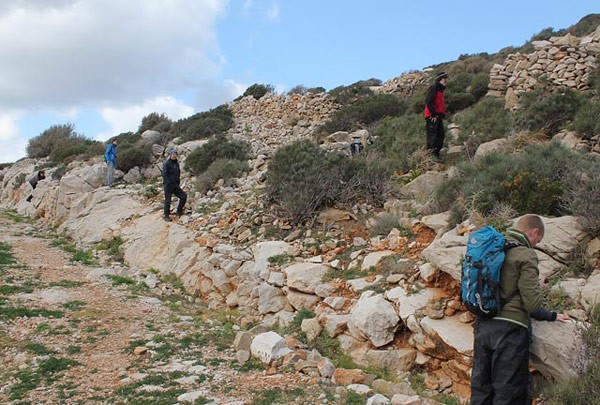 Miguel and Ana have recently established an exciting new eco-tourism venture called 'Balearic Shearwater Tours', providing an opportunity for visiting birders and tourists on Mallorca to see Balearic Shearwaters and other specialist fauna. They offer a range of guided tours to unspoilt offshore islands such as Sa Dragonera and Cabrera National Park, so please support them if you visit the islands and help raise the profile of eco-tourism in this region (as well as contributing to Balearic Shearwater conservation activities). Activities on offer include: 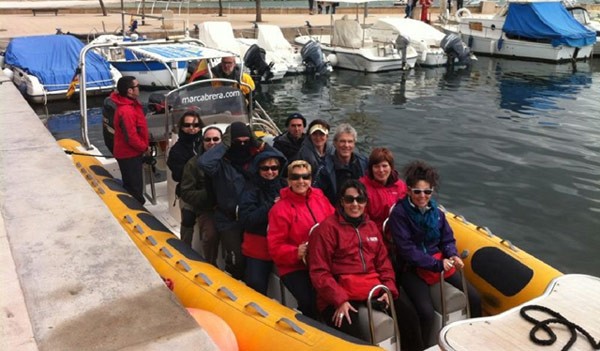 Further information on Balearic Shearwater Tours and their associated conservation activities is available at http://www.balearicshearwatertours.com. 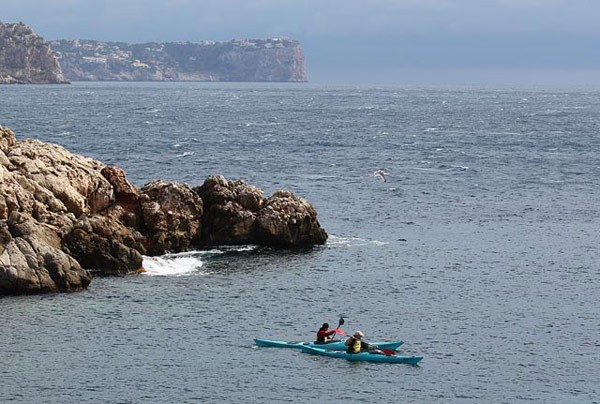 Lou and Russ kayaking off Sa Dragonera. You can also visit this magical island in the company of Miguel and Ana as part of their new eco-tourism venture, Balearic Shearwater Tours (Photo: Russell Wynn)

The project team are very grateful to Biel Sevilla and Zuzana Zajkova for their assistance with fieldwork on the Balearic Islands in 2012 and 2013. Joan Mayol Serra (Conservation Dept of the Balearic Islands Government) and Marti Mayol (Sa Dragonera National Park) have provided valuable assistance with permits and logistics, which have been essential for our fieldwork activities. The Director and staff at the Jaume Ferrer biological field station are thanked for providing accommodation at La Mola. Finally, thanks to Pep Arcos and others for incorporating our data in the revised International Species Action Plan for Balearic Shearwater, which can be downloaded by clicking here (PDF). 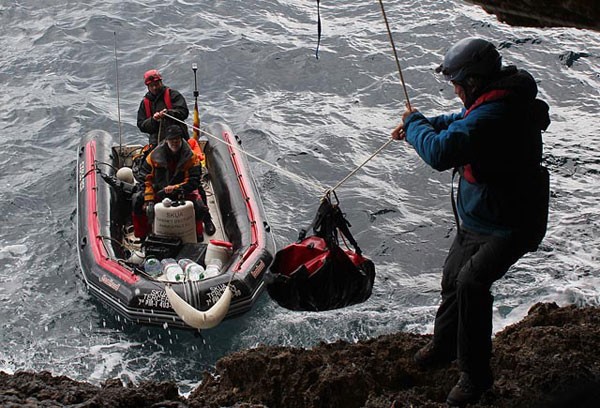 Teamwork in action: Tim, Miguel and Russ test a new pulley system for safely delivering equipment and supplies to the cave at Sa Cella during rough weather; what the photo doesn't show is Rhiannon, Lou and Ana pulling hard on the other end of the rope! (Photo: Russell Wynn)

The 2012/3 Shearwater Project team consists of:

Written by: Dr Russell B Wynn and the 2012-3 Project Shearwater team
Login to leave a comment
Return to List