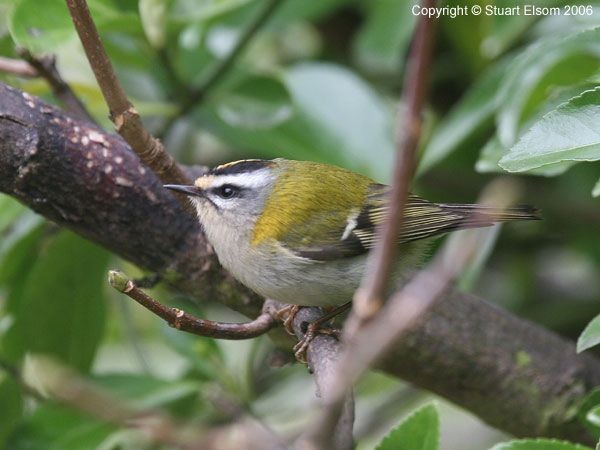 For British birders there are relatively few 'dazzlers' to feast our eyes upon. Those of us who have been fortunate enough to go birding in warmer climes will be fully aware that we are short-changed with eye-catchers! A notable exception is the stunningly beautiful Firecrest. Diminutive, good looking, and full of character, this striking crest enhances its desirability rating by being scarce enough to warrant attention. As a young birder, Firecrest ranked right up there on my 'most wanted' list, and when I eventually first feasted my eyes on this dazzling jewel I was not disappointed.

The Firecrest has a fascinating British history. Following a northwards spread in Europe, breeding was first confirmed in England in the New Forest, Hampshire, in 1962. This was no one-off colonist though, and since then the population has continued to increase. By 1968-1972 birds were found in twenty 10-km squares in England, and by 1988-1991 they bred in 99 squares, all but three of which were in England, giving a population estimate in the region of 80-250 pairs. Doubtless this is an underestimate for such an erratic species, which can arrive, colonise, and depart, an area within a year. Despite arriving with a swagger, this stunning sprite appears to exhibit little inclination for a mass colonization. The strongholds for the species remain in the southeast counties, with, for example, 46 singing males noted in one Buckinghamshire wood in 1975. Away from this core population, breeding attempts are sporadic, though breeding, or possible breeding, has occurred as far north as Yorkshire, Lancashire and Cheshire. 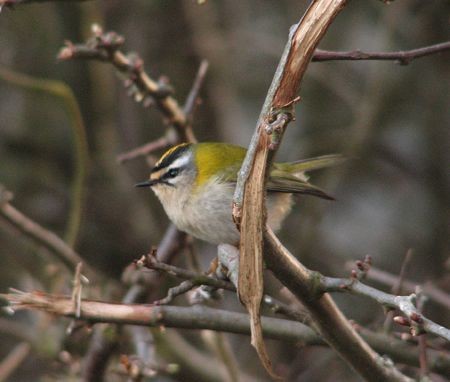 Firecrest: Spurn, E. Yorks April is one of the best months to be out and about searching for this jewel. Any stretch of coastal habitat along the east and south coast could produce the hoped-for find, particularly during onshore southeasters. Familiarity with the call is a key aid to locating migrants from the similar-sounding Goldcrest. (photo: Garry Taylor)

During passage periods, the majority occur between mid-March and April in the spring, and mid-September to mid-November in the autumn. The south coast accommodates the lion's share of migrants at both seasons, but the species is a scarce, but familiar, vagrant to the east coast with Yorkshire forming the northern limit for annual passage in double figures. For example, Yorkshire hosted 550 birds between 1960 and 1992; 83% of these were coastal, of which 44% were in spring. The species gets progressively rarer in northern counties, with just 17 records listed for Shetland, nearly all of which have been autumn records. In east coast counties such as Yorkshire and Norfolk, there has been a notable increase in passage birds since the 1970s.

The Winter Atlas put the number of wintering birds at 200-400, though this figure is presumably higher nowadays with milder winters. It is likely that our wintering birds originate from breeding populations in northeastern Europe, the majority of which winter to the south of us, along the east Atlantic seaboard to Portugal and the Mediterranean basin. In Britain, most wintering birds are found to the south of a line between the Humber and Mersey estuaries, with largest numbers in the counties bordering the English Channel. 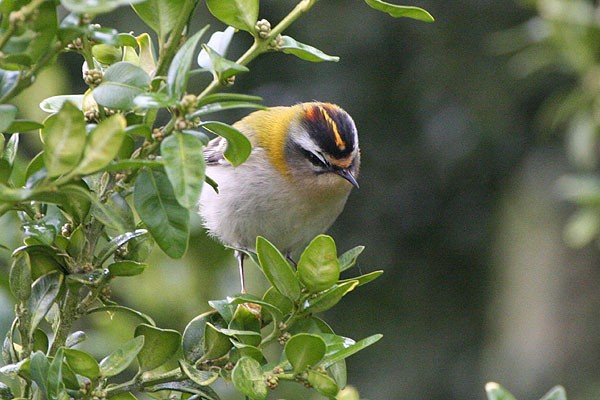 Where to find Firecrests on passage

Any stretch of east-, or south-, facing coastline between Cleveland and Scilly and south Wales could be expected to produce birds during migration periods. Wintering birds are less predictable, but the mild sheltered coastal strip along the English Channel to the southwest invariably holds the majority of the wintering population.

Click on any of the above locations to find out more details about that site.

This tiny, restless jewel of a bird competes with the Goldcrest for the title of the UK's smallest bird and both species are really only likely to be confused with each other.

The two species are superficially similar, and inexperienced observers can be lulled by a brightly-coloured Goldcrest into thinking they have actually seen a Firecrest. Firecrests differ from Goldcrests by having brighter green upperparts, bronze neck-sides, and whiter underparts. The fiery orange crown stripe, broad white supercilium and short black stripe through the eye create a distinctive 'fierce' expression.

Once learnt, the subtle difference in call between the two species can be a useful aid, that of the Firecrest being lower-pitched and more 'breathless' to my ears. The songs also differ, with Firecrest lacking the rhythm of Goldcrest, being more repetitive in pitch without the starting 'spiral' and warbling aspect of Goldcrest. As always, these differences are best appreciated by listening to tapes (or the recordings on BirdGuides DVDs or DVD-ROMs). 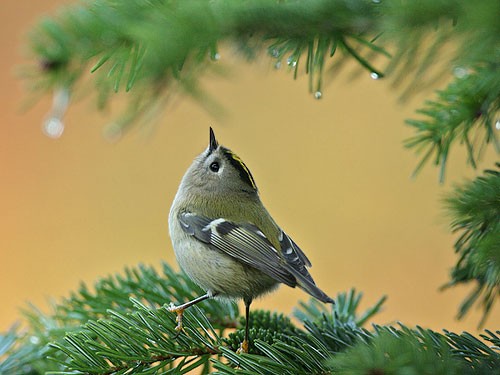 Goldcrest: Spital, Cheshire Compared to the Firecrest, the face of the Goldcrest looks 'featureless'. Bright coloured males with much orange in the crown-stripe can confuse the unwary, but the lack of a white supercilium, bronzy shoulder patch and duller upperpart colour should rapidly facilitate identification as a Goldcrest. (photo: Steve Round).