After some of the warmest weather of the year last week, this week saw a return to rather more typical summer weather — sunshine and showers mainly — with the odd rumble of thunder, flash of lightning and hailstorms thrown in for good measure. However, with the past seven days all falling within the fabled "first ten days of June", traditionally a time when some of the very best birds of the year can turn up, expectations were high and, by the middle of the week, those expectations were more than fulfilled. 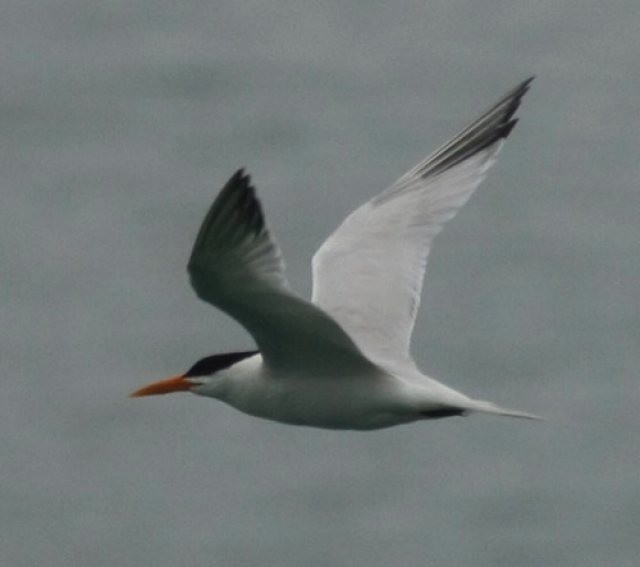 Comfortably leading the way was the thrilling news of a Royal Tern, a live Irish first, found around Inchydoney Bay (Co. Cork) on the early evening of 7th. The bird spent some two and a half hours in the general area of the bay before heading off towards Ring and, sadly, didn't reappear for those travelling across Ireland or the Irish Sea the following day. This spectacular find was well documented in a series of photographs that clearly dispelled any thoughts of the bird being the rather more usual Irish "orange-billed" tern, Elegant (or at least Elegant-Tern-type birds). Ireland's closest brush with the species before this was a tideline corpse, picked up along the North Bull sanctuary in County Dublin in March 1954 and now, 45 years on, the real deal has finally made it! Just four records remain on the British List, the most recent acceptance being the bird reported from two sites in Lothian in the summer of 1999.

Late news cropped up early this week of a White's Thrush being trapped, ringed and released on the Isle of May (Fife) on 2nd. Once accepted by the BBRC, this will be only the fourth-ever spring record of this magnificent species. The others occurred in April 2005 (on Shetland), April 1993 (a five-day bird on Copeland Island, County Down) and in May 1964 (in Cheshire). Despite White's Thrush becoming more and more frequent (there was a bumper autumn last year of course) there are few more energising birds on the British and Irish lists, and a tingle of excitement always follows when news of one of these classy thrushes emerges. Much the same could be said for Oriental Pratincole and the bird seen last week in West Sussex and Kent was reported again on 4th at Dungeness (although many on site suggested that the sighting may not have been of the bird at all). However, later on the same day, an unidentified pratincole appeared at Grove Ferry and it must surely have been a decent bet that the bird concerned was indeed the Oriental. While we are on the subject of Grove Ferry, last week's Stilt Sandpiper record has been retracted by the observer, who admits a mistake was made and the bird was actually a Curlew Sandpiper. Such honesty is rather refreshing in this day and age and many web-based birding voices seem to have acknowledged this. On Shetland, the summering drake Wood Duck remained at Loch of Spiggie, Mainland until 9th at least and the two Zitting Cisticolas remained at Port Soif on Guernsey for another week.

It is no real surprise that seabirds were thin on the ground this week. Just one Long-tailed Skua was reported, seen heading north over Turnberry Point (Ayrshire) on 7th, while single Pomarine Skuas were seen from the coasts of Devon, Scilly and Angus and four Balearic Shearwaters were off Portland Bill (Dorset) on 9th.

In Ireland, four Cattle Egrets were seen in counties Cork and Waterford, around the Tourig River at the start of the week, with a single bird at Blagdon Lake (Somerset) on 8th. The Great White Egret in Cleveland moved to Dorman's Pool on 8th–9th and other singles were at Minsmere (Suffolk) on 4th, again at Hickling Broad (Norfolk) on 9th–10th and at Leighton Moss (Lancashire) on 10th. A minimum of 30 Spoonbills were reported this week, including five still in Cheshire (around Burton Marsh and Inner Marsh Farm), at least four birds were along the north Norfolk coast (all four were at Cley Marshes on 4th) and three birds were seen in Cumbria and Dumfries & Galloway during the past seven days. Two Spoonbills were also seen flying over Skomer (Pembrokeshire) on 9th. A Common Crane was seen on the Ythan Estuary (Aberdeenshire) on 6th.

A White Stork made a brief appearance in Northumberland on 6th and a Purple Heron flew over Dungeness (Kent) on 5th. On 10th, two more single Purple Herons were seen at Ham Wall (Somerset) and Minsmere (Suffolk). The popular first-summer Squacco Heron remained at Wicken Fen (Cambridgeshire) from 4th–10th while a male Little Bittern on the Somerset Levels, at Walton Heath from 6th–10th, was also very well received. Another male Little Bittern was seen at Lower Moors, St. Mary's (Scilly), also on 6th (a male was seen here in mid-May). A single singing male Spotted Crake was on Tiree (Argyll) on 7th. 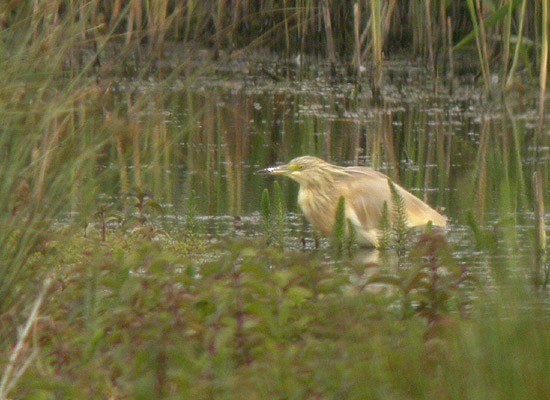 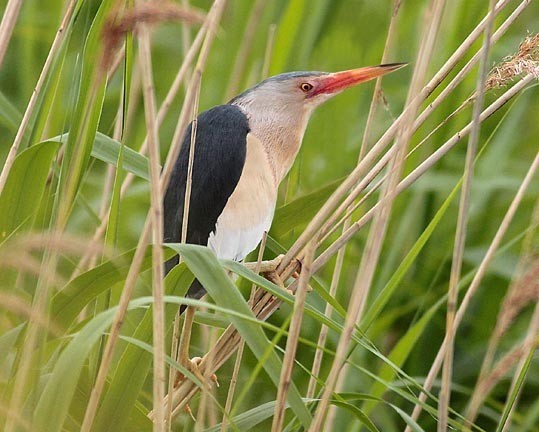 The Red-breasted Goose (of unknown origin) remained at Loch of Strathbeg (Aberdeenshire) to 4th. In Cornwall, the drake Black Duck was still on Colliford Lake until 10th and on Shetland the drake Lesser Scaup was on the Loch of Benston, Mainland from 4th–7th at least. Other lingering wildfowl this week included the drake Green-winged Teal still on Loch Stiapavat, Lewis (Outer Hebrides), the drake Ferruginous Duck at Chew Valley Lake (Somerset) and the drake American Wigeon at Martin Mere (Lancashire), which moved to Marshside on 10th. Two drake Surf Scoters were again off Blackdog (Aberdeenshire) on 7th.

There were just two Black Kites this week: one continued to roam around west Cornwall, being seen at Marazion Marsh on 7th, while the other was near Bridgwater (Somerset) on 6th. An adult male Red-footed Falcon flew over Winterton Dunes (Norfolk) on 5th and a Snowy Owl was at Baleshare, North Uist (Outer Hebrides) on 4th.

The often-obliging Black-winged Pratincole in northwest Norfolk continued to show just inland of Thornham throughout the week, making frequent visits to nearby Titchwell. Single Red-necked Phalaropes this week were seen at Hickling Broad (Norfolk) from 4th–5th, Throckmorton Tip (Worcestershire) on 4th, Belvide Reservoir (Staffordshire) on 6th, Sunbiggin Tarn (Cumbria) on 7th and Lough Boora Parklands (Co. Offaly) on 9th. Two birds were reported from Humberston Fitties (Lincolnshire) on 5th, a male lingering long enough to be photographed. A Buff-breasted Sandpiper spent a day at Attenborough Pits (Nottinghamshire) on 4th and three Pectoral Sandpipers included one at Llangloffan (Pembrokeshire) on 6th–7th, with others at Edderthorpe Flash (South Yorkshire) and Leighton Moss (Lancashire). The latter site also hosted a Temminck's Stint this week (on 7th) with two more Lancashire birds reported at Marshside on 9th (although two Little Stints were seen later on the same day). A Temminck's Stint was seen at Cley Marshes (Norfolk) on 6th–7th. 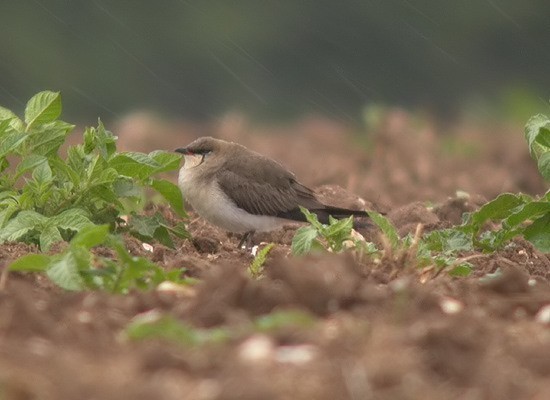 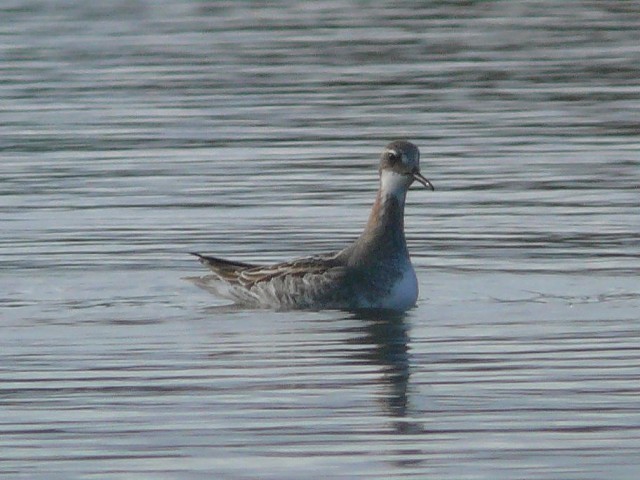 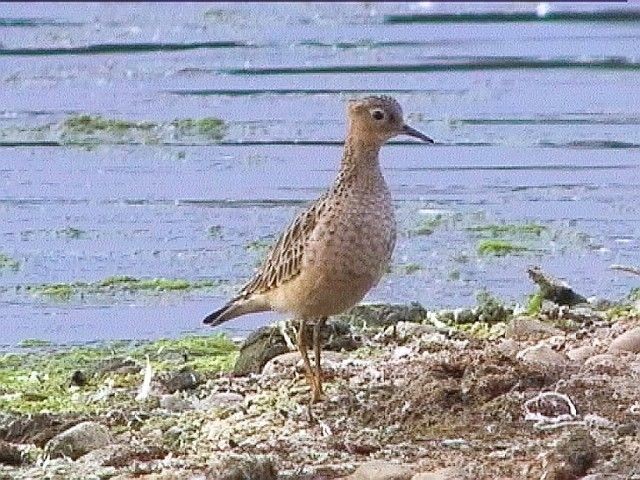 A second-summer Caspian Gull was reported from Titchwell (Norfolk) on 5th and a similarly aged bird was at Minsmere (Suffolk) on 9th, while seven or eight Iceland Gulls and three or four Glaucous Gulls were noted countrywide. An adult Gull-billed Tern flew west over Keyhaven Marshes (Hampshire) on 4th and an adult White-winged Black Tern was at Tacumshin (Co. Wexford) on 7th–9th, where the summering Forster's Tern was seen again on 4th and 9th–10th.

The summering Pallid Swift (is it on a nest!?) again spent time around Crosby Marine Park and Seaforth (Merseyside) this week, seen between 5th and 8th. A Wryneck was at Thornton-in-Craven (North Yorkshire) on 5th. Late news from Tiree concerned a male Bluethroat at Kilkenneth on 1st while, this week, a Bluethroat arrived on Fair Isle on 9th. 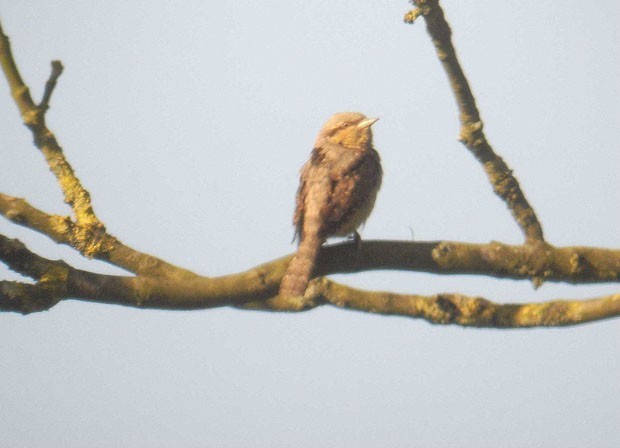 Single Red-backed Shrikes were seen at Carr Vale (Derbyshire) and Strumpshaw (Norfolk), both on 7th, at Spurn (East Yorkshire) on 9th–10th and Gibraltar Point (Lincolnshire) on 10th. On 6th, a grey shrike appeared on Ramsey Island (Pembrokeshire) and was thought to have been a Great Grey Shrike. Golden Orioles included two or three on Scilly, singles in Kent, West Yorkshire, Shetland and two in Gwynedd (both immature males and both on Bardsey Island, one on 4th and the other on 8th–9th). An adult male Red-breasted Flycatcher was trapped and ringed on Fair Isle on 9th.

A spring Paddyfield Warbler is still a very rare bird, so birders lucky enough to connect with Cheshire's first record, a bird trapped and ringed on Hilbre Island on 5th (and re-trapped on 9th), must have felt particularly chuffed! Shetland has bagged all four of this decade's spring records (between 2004 and 2007), as well as the two previous to that (in 1992 and 1993). Before that, it was the bird trapped in Suffolk in 1988, which lead to a whole mass of Acrocephalus/Phylloscopus identification issues! Also on 5th, a singing male Greenish Warbler was a brief visitor to Man Sands (Devon) and a very unseasonable Yellow-browed Warbler was on Predannack Head (Cornwall). Two Icterine Warblers were trapped on Bardsey Island this week, on 7th and 10th, while at least eight Marsh Warblers included two birds in Suffolk on 6th–7th and one on a busy Fair Isle on 9th. 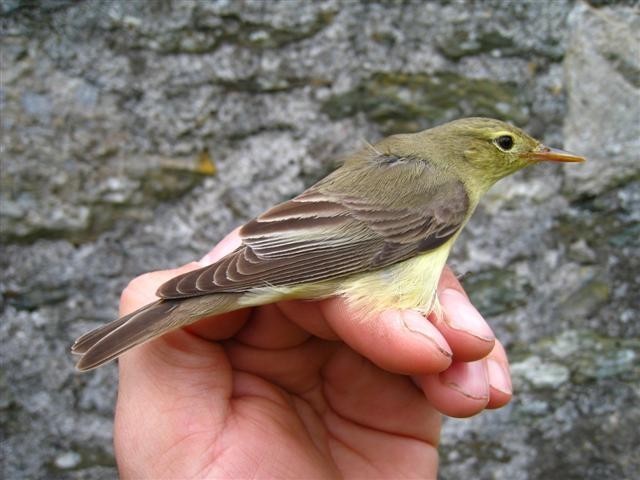 On Shetland, the singing (and nest-building) Subalpine Warbler at Skaw, Unst has finally been confirmed as a Moltoni's Subalpine Warbler and remained to 9th at least. This particular form of Subalpine Warbler has yet to be admitted to the British List, so this well-documented bird may prove to be the first. A male Moltoni's was seen (and heard) in the dunes at Burnham Overy in Norfolk in October 2007 and others have been suspected over the years (dating back to one at Portland in 1975). It is interesting to note a lack of true western European vagrants in recent springs (take a look at this year for starters: Eastern Bonelli's Warbler and Eastern Black-eared Wheatears have made it, not a sniff of their Western counterparts). One might wonder how many Moltoni's (breeding on western Mediterranean islands: the Balearics, Corsica and Sardinia) have made it here recently and in the past too, compared to genuine Western Subalpine Warblers (those breeding in southwest Europe). 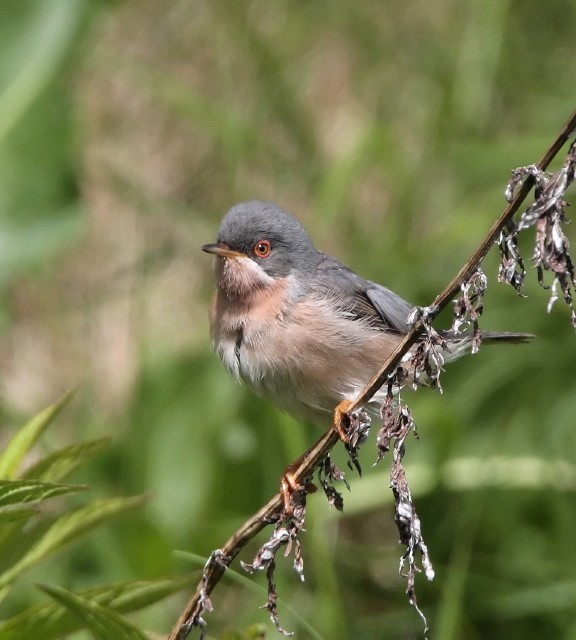 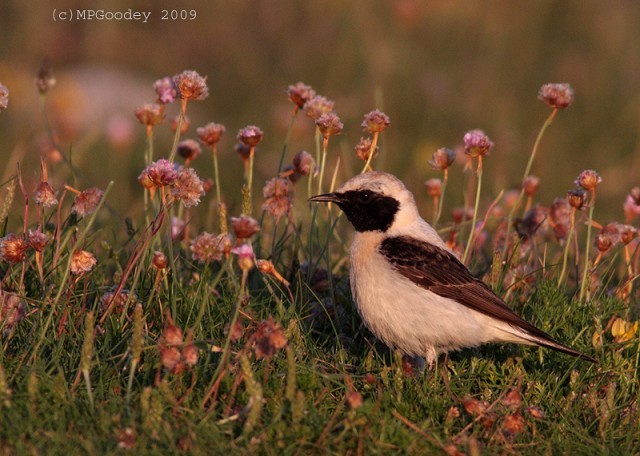 Single Serins were seen at Hamworthy and West Bexington (Dorset) on 7th and another flew over Pegwell Bay (Kent) on 8th. In Essex, a first-summer male Common Rosefinch was at Bradwell-on-Sea from 5th–8th and another was seen on Fair Isle on 9th. On the final day of the review week, a male Ortolan Bunting dropped in at Spurn (East Yorkshire). 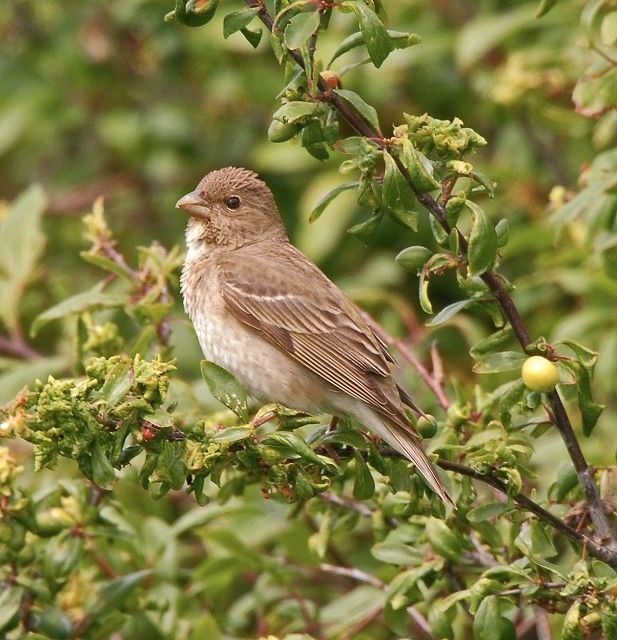 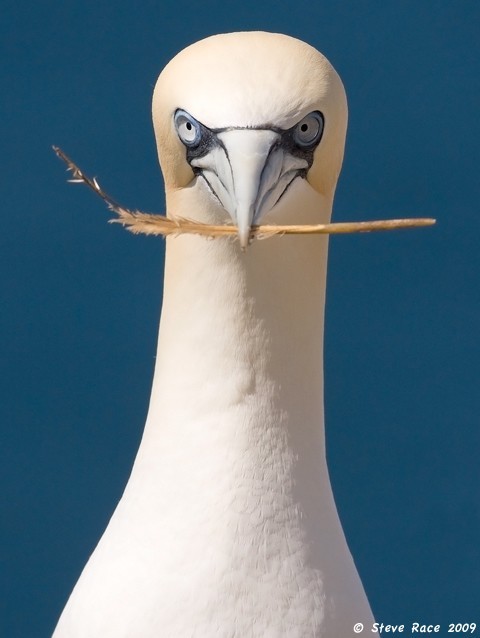 Over the last couple of years, bird photographer Steve Race has submitted a huge number of images taken primarily along the east coast of England. Steve regularly has images included among the 'notable images' in our weekly reviews. This week, following a trip to Bass Rock in Scotland, Steve has uploaded some great images of the location's star species: the Gannet. Our favourite among these is an engaging 'head and shoulders' portrait of a Gannet looking straight at the camera. As well as giving great eye contact, this pose emphasises the unusual 'face' of this species. The simple composition is strengthened by the central placement of the bird in the frame and the presence of a feather held laterally in the bird's bill. Complementary colours and good tonal detail round off a stunning image. 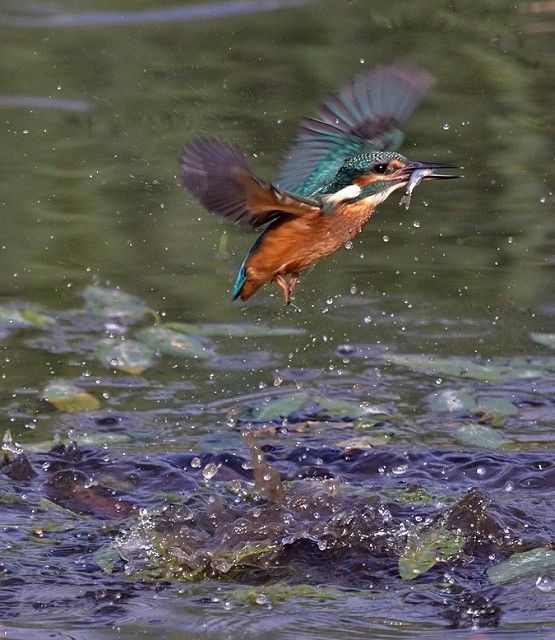 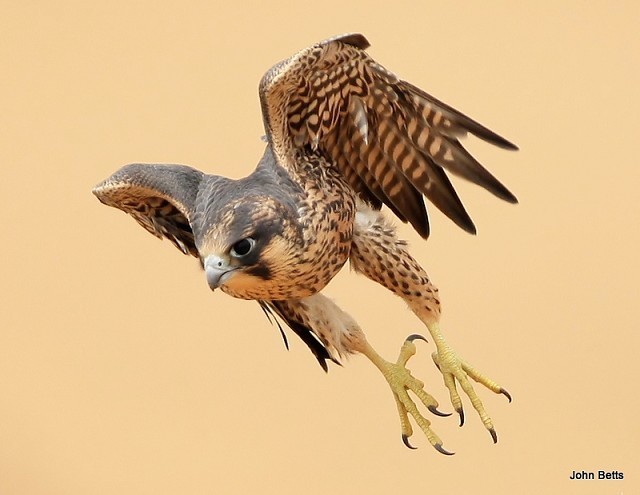 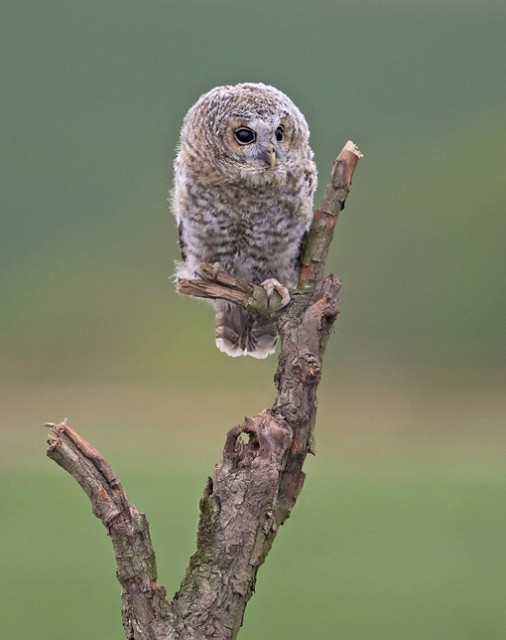 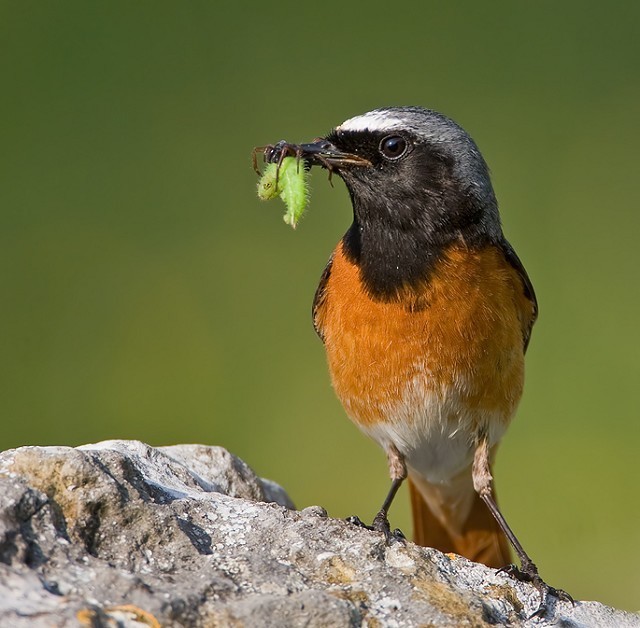 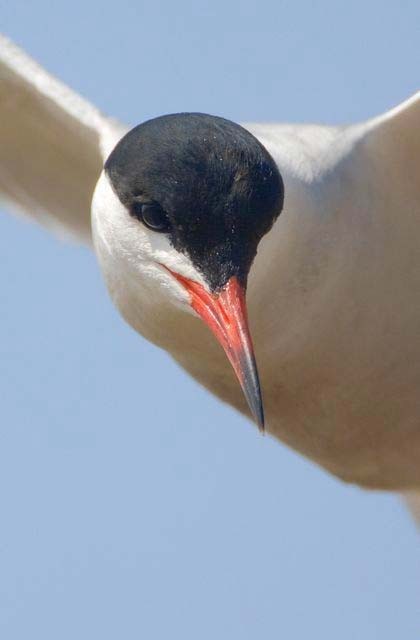 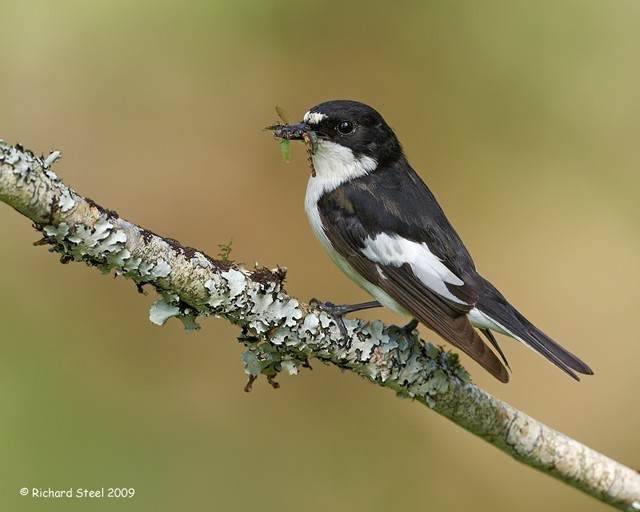 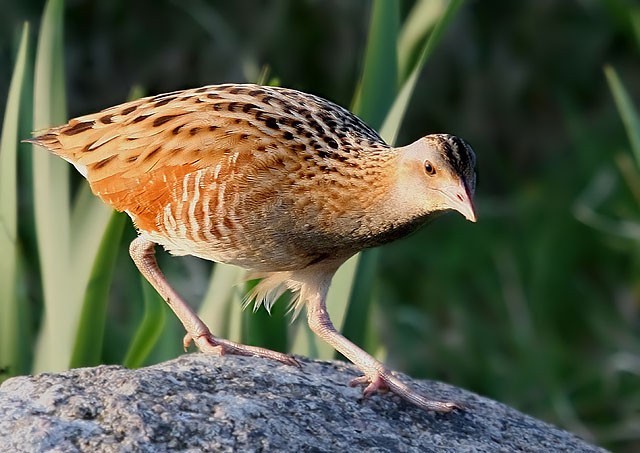 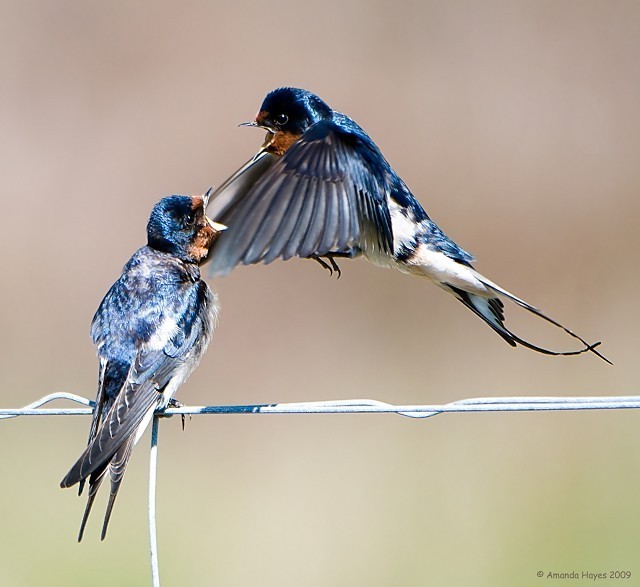 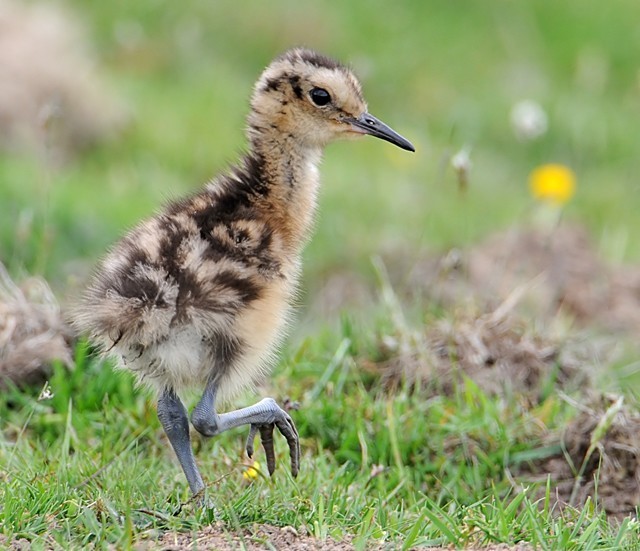 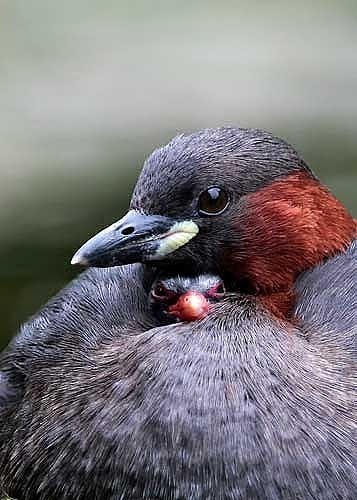 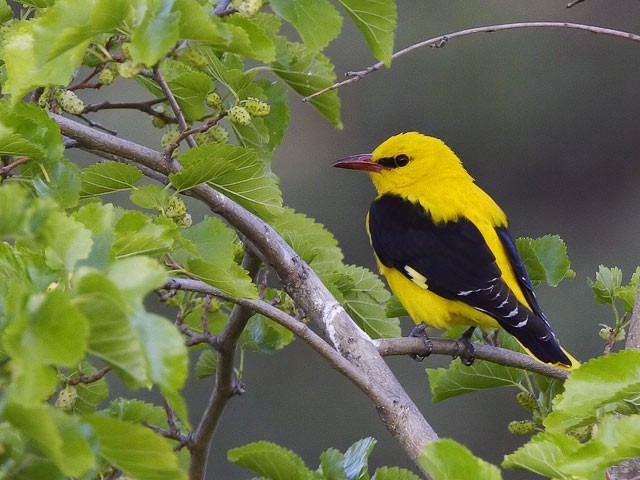 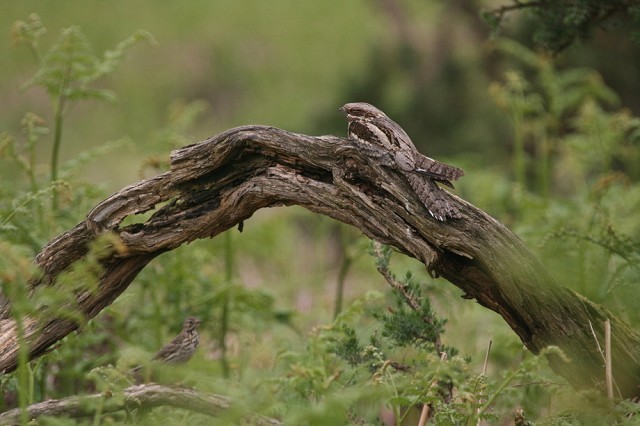 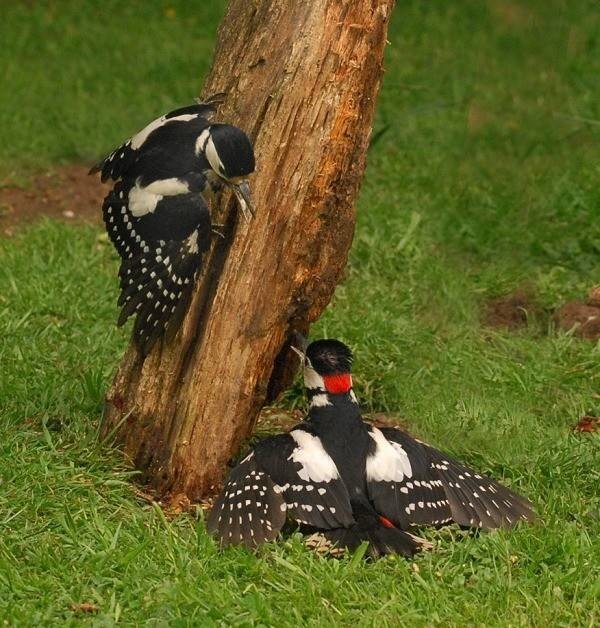