This week's roll-call looked altogether more like something from mid-October than the end of May, but the continuing onslaught of unseasonable transatlantic weather systems was inevitably going to produce dividends. After last week's Grey-cheeked Thrush in Ireland, North Ronaldsay hit back with its own Catharus — a typically bright-looking Veery extracted from the nets on the morning of 30th. Still present to 2nd, this is the island's second of the species and Britain's 11th record. 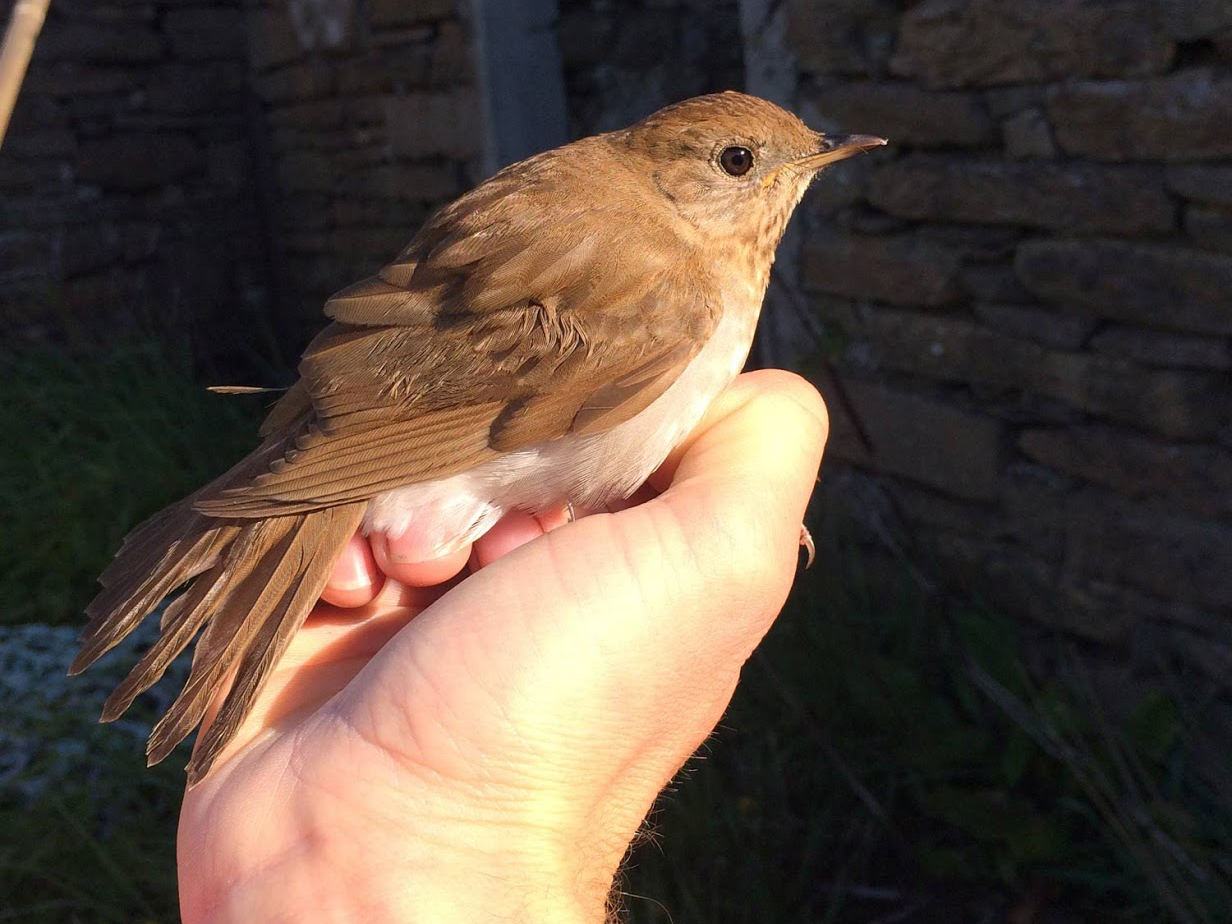 If this wasn't enough, an astonishing third Catharus was then found, on Skokholm, Pembs, on Tuesday 2nd. Again extracted from a mist net, this time it was a Swainson's — a second for both Wales and Skokholm, following the first there (and indeed anywhere in Britain) in October 1967. While there have been occasional spring records of Catharus thrushes (and other Nearctic passerines) in spring in the past, the arrival of three within a week is unprecedented and no doubt testament to the unusually foul late spring conditions that Britain and Ireland have been enduring of late. This was the first Swainson's to reach Britain in spring, though there is a record of one picked up dead in Co Mayo, Ireland, back on 26 May 1956. 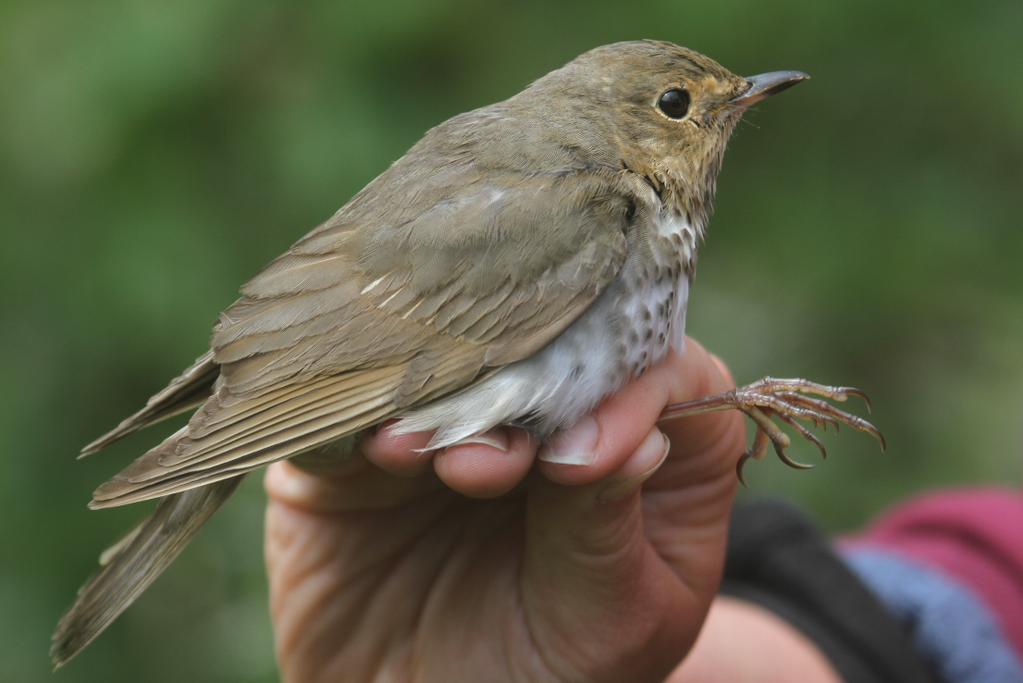 The recent stormy weather also raises the question of what else must be out there at the moment — it's fair to say that Nearctic passerines aren't on the radar for many birders at this time of year, and the likelihood of birds being overlooked is even higher than it otherwise might be. There must be a very good chance that several other gems are dotted about Irish headlands, the Outer Hebrides, Scilly and even Shetland right now. A vivid male wood-warbler would certainly go down well, while a reasonable description of a 'waxwing' seen by a non-birder on St Mary's on Tuesday does make you wonder about the possibility of Cedar ...!

After last week's apparent parvipes and interior double on Unst, Shetland, westerly gales also brought a large, rangy Todd's Canada Goose to North Ronaldsay on 31st, while a couple of drake American Wigeon also appeared in East Yorkshire — at Spurn and Bewholme respectively. However, the latter are more likely to have been around a while given that both appear paired with female Eurasian Wigeon. Another drake American was at Loch of Strathbeg, Aberdeens, on 28th; just up the coast the King Eider remained on the Ythan Estuary and a female Surf Scoter off Murcar golf course on 1st hinted at things to come. A drake Green-winged Teal appeared at Carr Valley, Derbyshire, from 30th-2nd, the brace of drake Ring-necked Ducks remained on Mainland Shetland and a third lingered at University College Dublin to 28th, while a Black Brant stubbornly hung on at Spurn, E Yorks, to 27th. 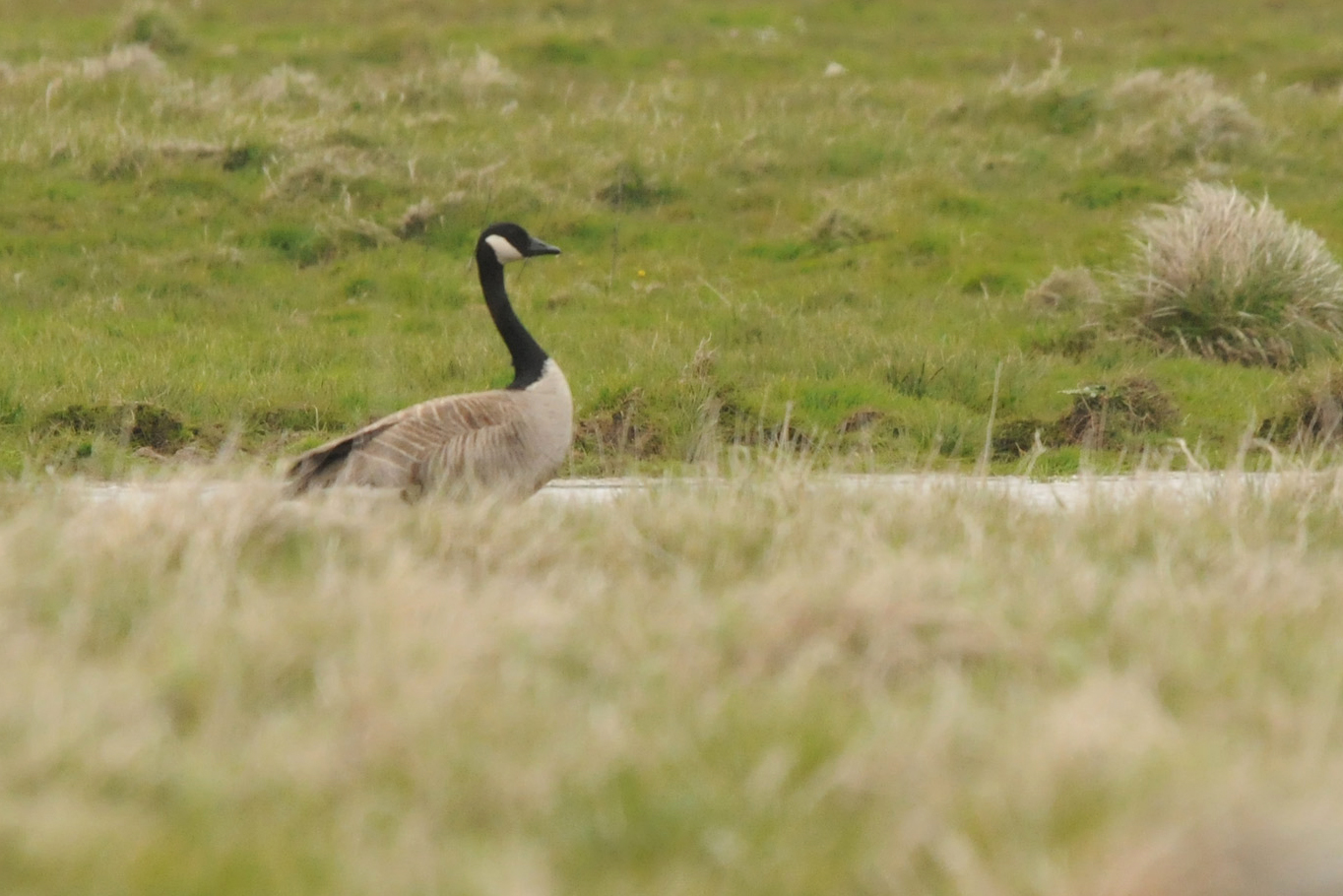 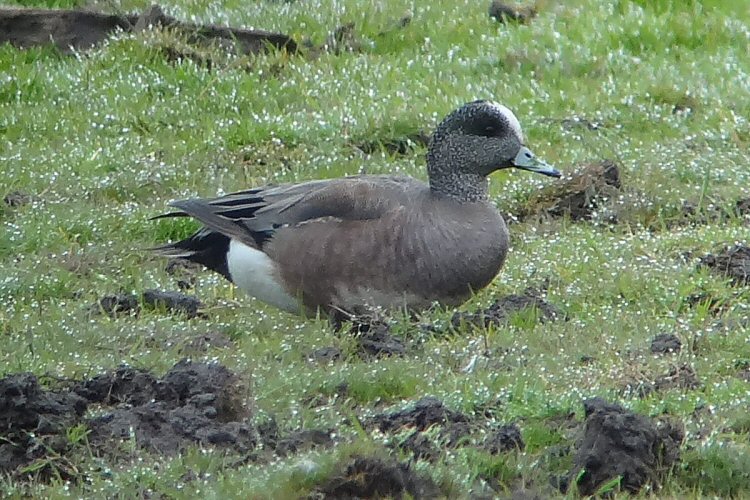 Understandably causing great excitement was a female Grey Phalarope at Brandon Marsh, Warks, on 2nd. In all its breeding glory, visitors were attracted from far and wide throughout the afternoon until its disappearance a short time after 4 pm — unfortunately local gulls were giving it a rather hard time and it's entirely possible that it may have ended up down a larid's gullet. 'Red' breeding-plumaged birds are genuinely a very rare sight in Britain and this was very much a sighting to be savoured, entitling many to a much-wanted 'plumage tick'. 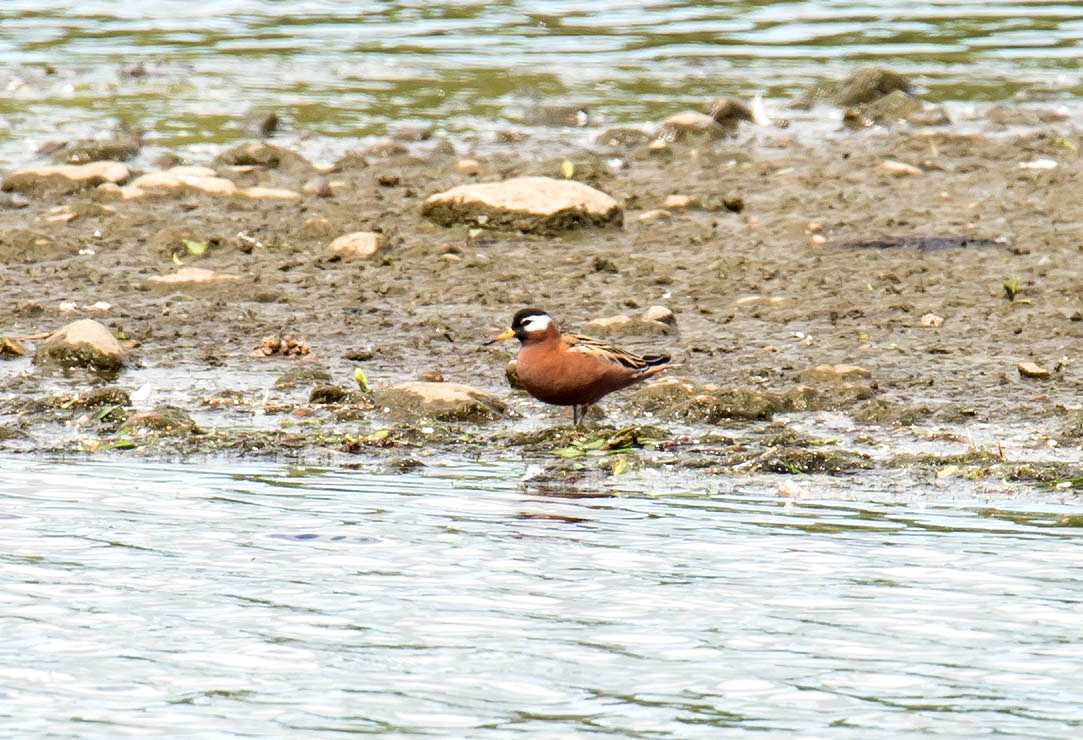 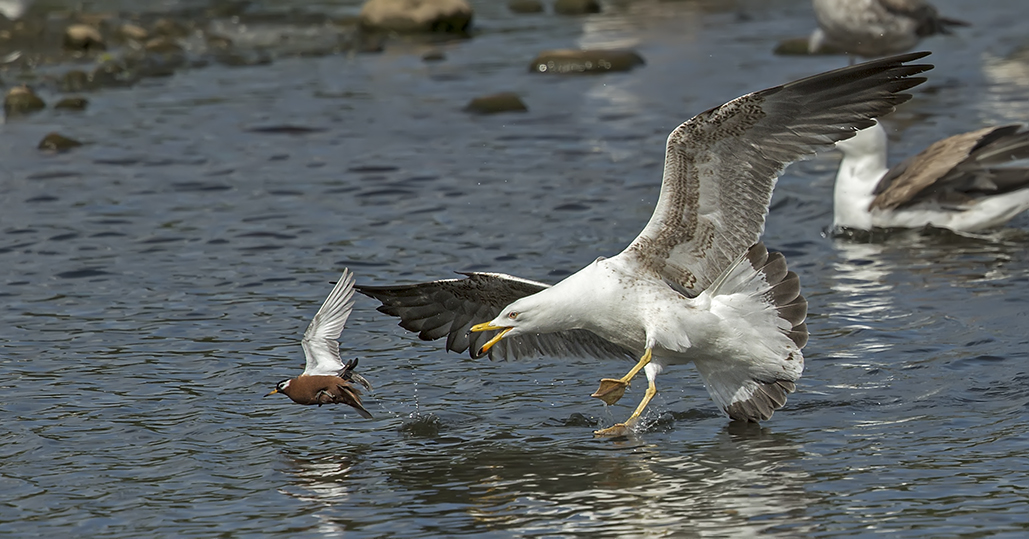 This Grey Phalarope occurred among a genuinely impressive — at least by British and Irish standards — spring influx of Red-necked Phalaropes, with more than 20 migrants recorded during the week. The peak count was of three on North Ronaldsay on 28th, with twos at Musselburgh Lagoons, Lothian, on 31st and at Mudeford Quay and later Blashford Lakes, Hants, on 2nd. One at Belfast Lough, Co Antrim, from 29-31st was a good Northern Irish occurrence, while there were a number of inland records including birds at Cotswold Water Park, Glos, on 30th and Theale Gravel Pits, Berks, on 31st; a female at Slimbridge, Glos, on 28th is assumed to be the returning bird first seen in 2011. 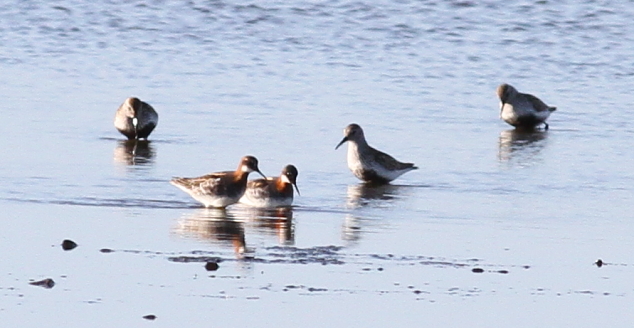 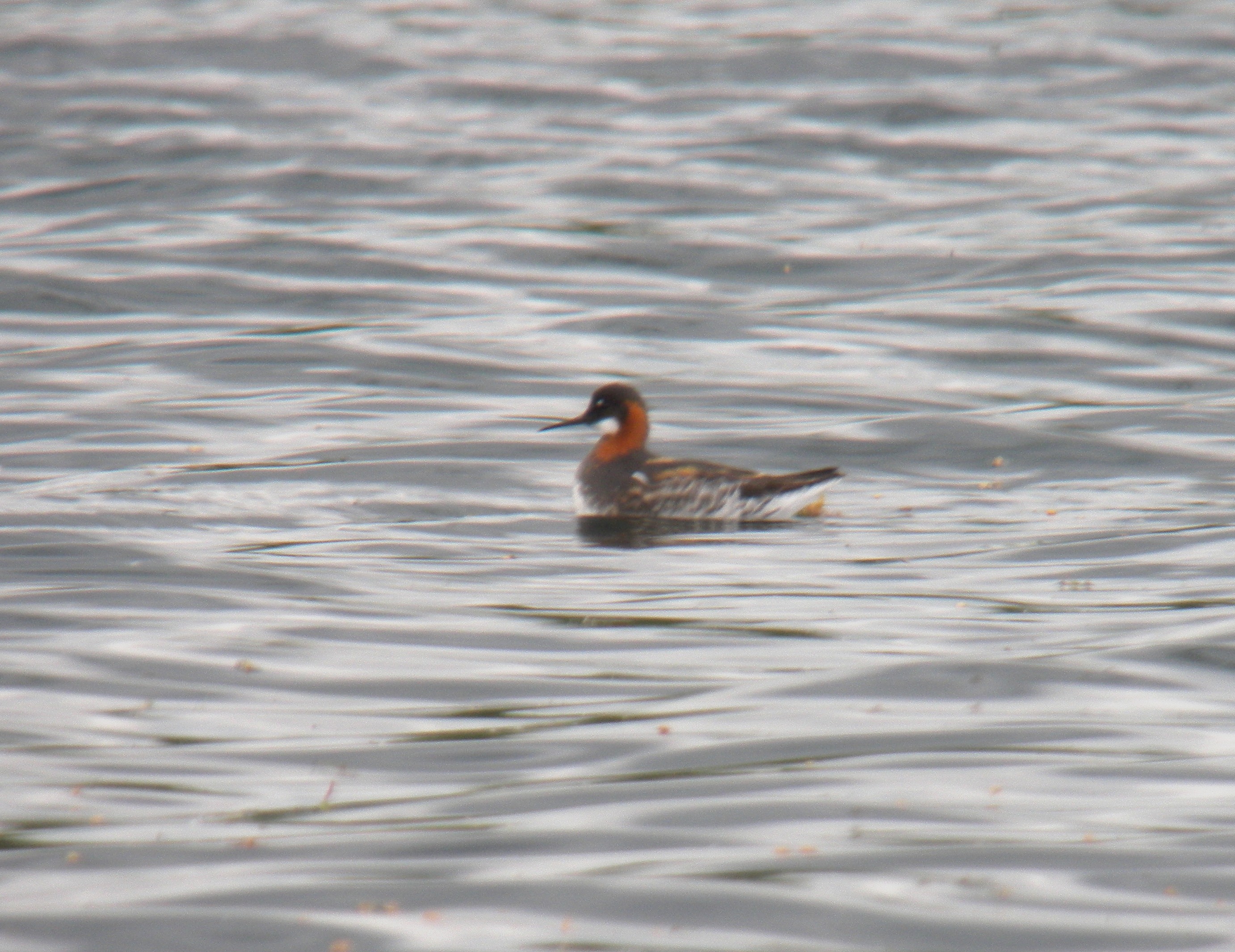 A pratincole photographed and belatedly reported from North Gare on Tuesday 26th was presumably the Black-winged Pratincole that later pitched up at Bothal Pond, Northumbs, from 29-1st. This in turn raises the question of whether it is last year's bird returning, which seems likely given that pratincoles have done this in the past. 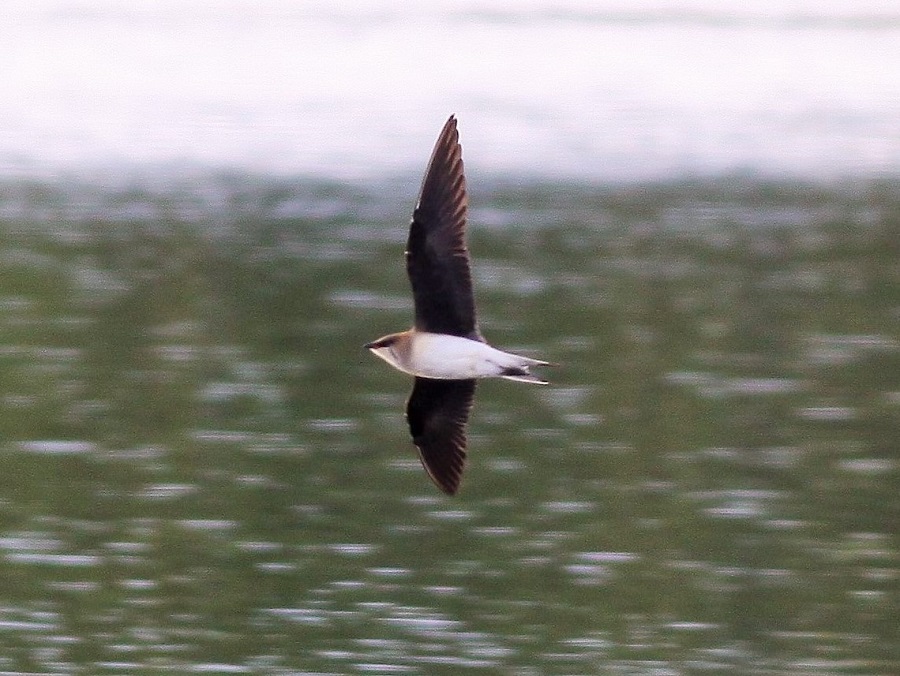 In Hampshire the Greater Yellowlegs continued to perform well at Titchfield Haven throughout the week, while the two Black-winged Stilts moved from Essex to Frampton Marsh, Lincs, on 27-28th and then to Potteric Carr, S Yorks, on 29th. A single bird was at Sidlesham Ferry Pool, W Sussex, also from 29th. A Broad-billed Sandpiper at Findhorn Bay, Moray/Nairn, on 30-31st was the first county record since 1990, while two White-rumped Sandpipers were recorded nationally: at Lough Beg, Co Londonderry, on 28-29th and at Frampton Marsh, Lincs, from 29-31st. Four Pectoral Sandpipers were noted: at Loch Stiapabhat, Lewis, on 28th; Tiln, Notts, on 29-30th; Lough Beg on 30th; and Dunnington, Warks, on 31st. A female Kentish Plover on the beach at Balcomie, Fife, on 30-31st was a fantastic county record so far north. 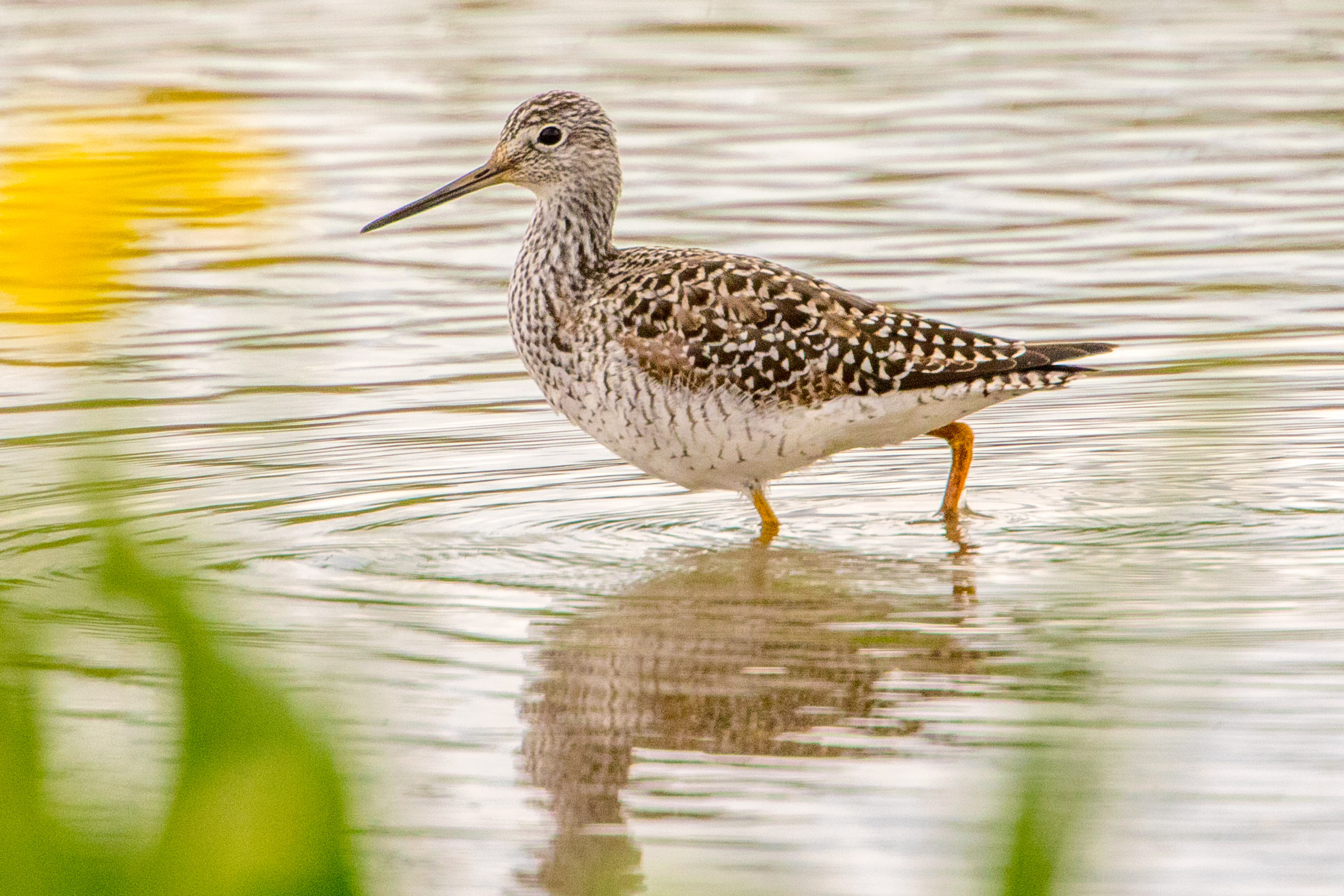 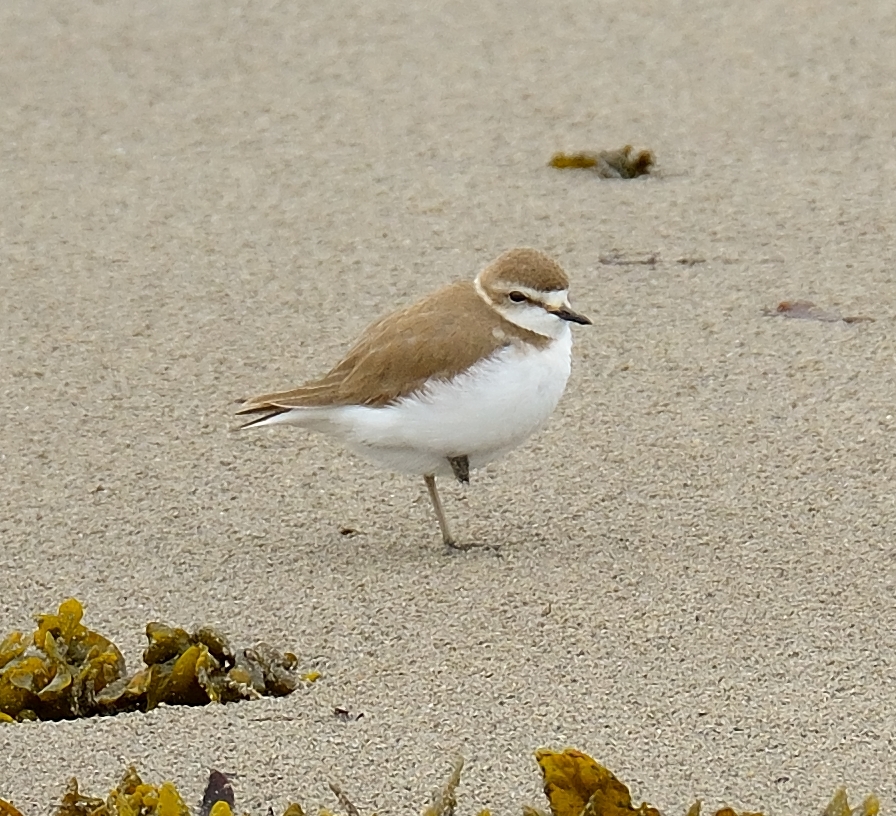 The Squacco Heron survived the abhorrent conditions on St Mary's, Scilly, and was still present on 2nd; two Night Herons were also still there on 27th and a third remained at St Clement, Cornwall, early in the week. The Little Bittern at Lakenheath, Suffolk, also notched up another week in residence but Purple Herons in Dorset and Cornwall moved on before the weekend. A Cattle Egret was at Cooling Marshes, Kent, on 31st but after last week's multitude of sightings, there was not a single report of Black Stork. 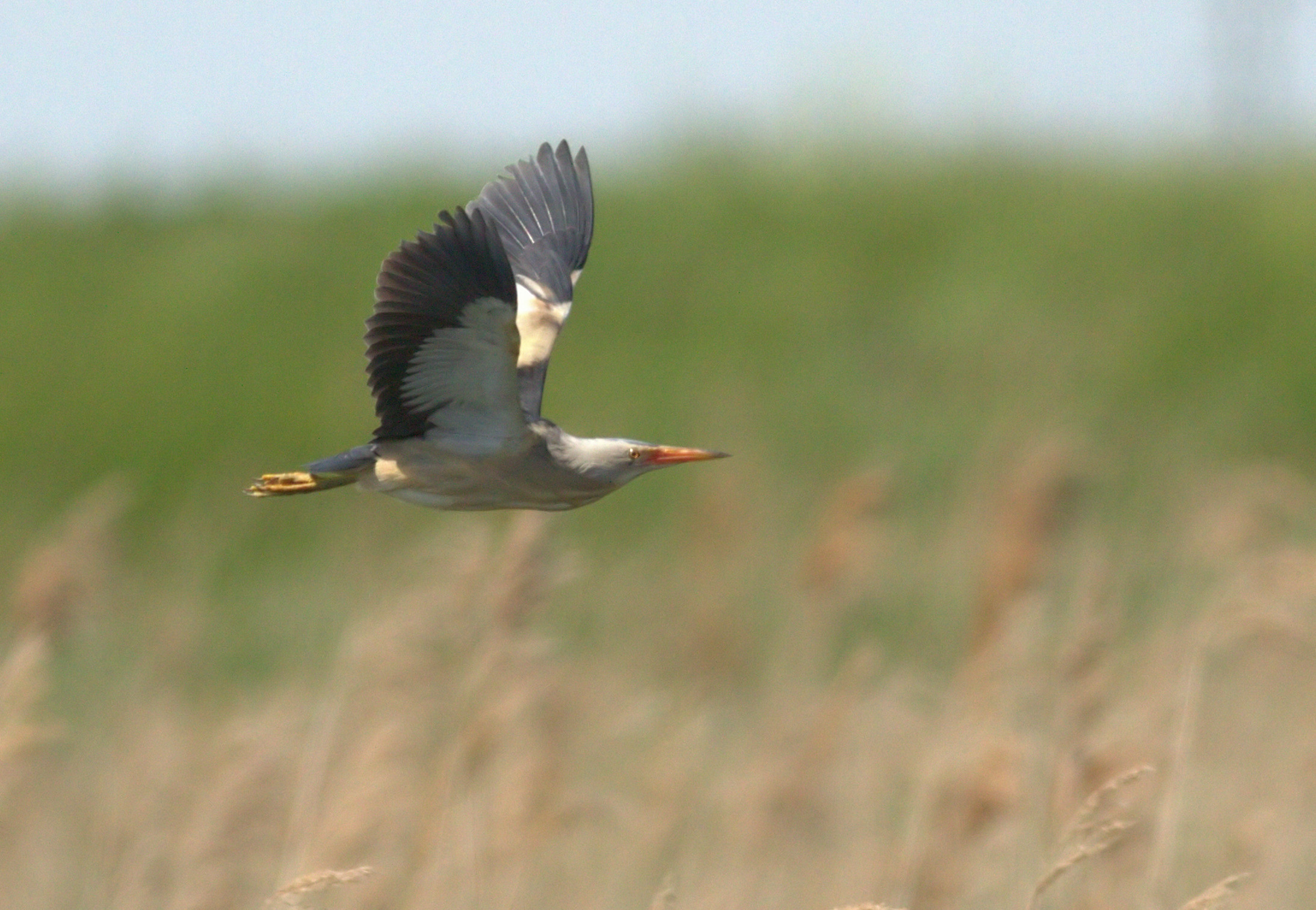 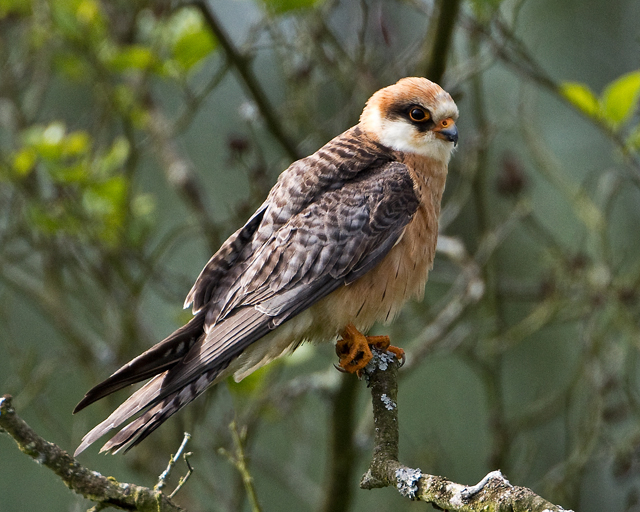 Inclement weather threw up some reasonable seawatching with many sites on the south coast and in south-western England and Wales logging European Storm-petrels on 1st and 2nd. Long-tailed Skua passage yet again produced some great totals in the Outer Hebrides, including 325 past Aird an Runair on 28th and 200+ on 31st. Pomarine Skua totals were somewhat lower but tens were still passing the Outer Hebrides and a few more were reported from English Channel coasts.

After another largely quiet week for European migrants it was pleasing to see a slight upturn in records following south-easterlies on 2nd; Shetland claimed the vast majority of birds with Red-backed Shrikes and Icterine Warblers into double figures for the first time this spring. Among these were a handful of Red-spotted Bluethroats, Common Rosefinches and the first Marsh Warblers of 2015 (Fair Isle on 1st and Unst on 2nd), while Greenish Warblers reached Out Skerries and Skaw, Unst, on 2nd. Last week's subalpine warbler was still present on 28th at Baltasound, Unst, where there was also a Rustic Bunting from 27-29th. Another Rustic lingered on North Ronaldsay to 30th. 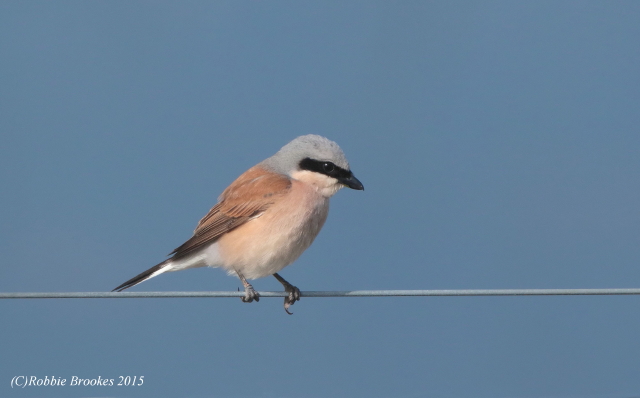 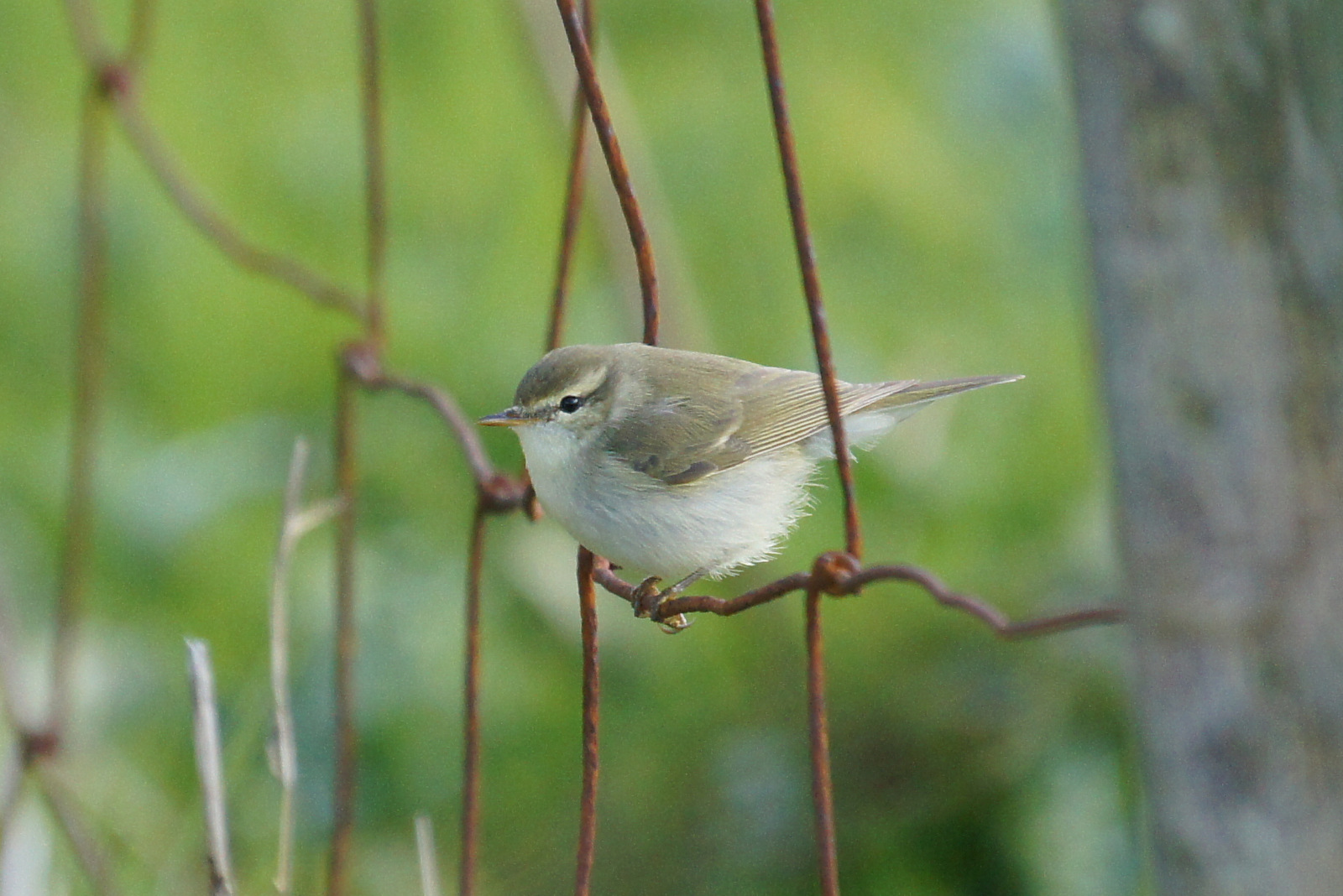 A rare mainland Icterine Warbler was at Walsey Hills, Norfolk, on 31st, while Red-backed Shrikes were at Frodsham, Cheshire, on 29-30th and at Southwold, Suffolk, on 30th. The week's only Melodious Warbler was typically in the far south-west, popping up at Ponsongarth, Cornwall, on 27th. Common Rosefinches were in Cornwall and Devon while a handful of Golden Orioles included a singing male near Forres, Moray/Nairn, on 2nd. There was a report of a Hoopoe seen 'recently' near Pembridge, Herefordshire, while a Wryneck was found expired on Out Skerries on 1st. A Shore Lark on Bardsey Island, Gwynedd, on 30-31st was a real surprise for the time of year. 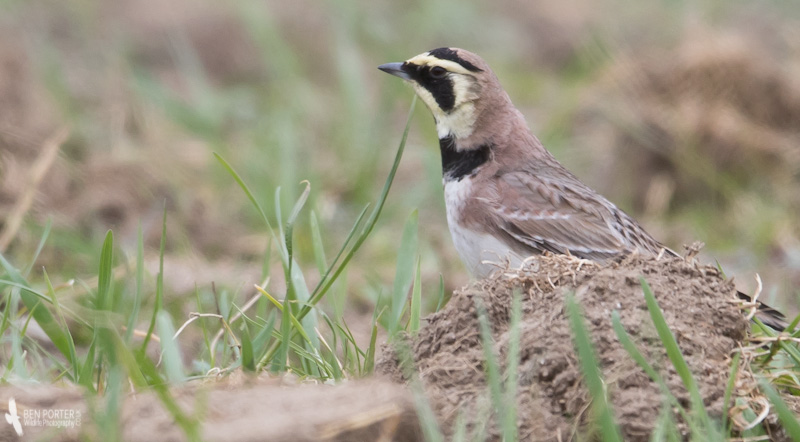 European Bee-eaters included three at Ringmore, Devon, on 30th and two at Berwick, E Sussex, on 29th; a lingering bird remained in west Cornwall to 30th when it was last seen at St Buryan, while further records came from Dorset, Kent, Suffolk and Orkney. A Red-rumped Swallow at Quoile Pondage, Co Down, on 28th chose not to linger and the bird at Covenham Reservoir, Lincs, on 29th was only reported once. A Grey-headed Wagtail charmed on the scrapes at Low Newton-by-the-Sea, Northumbs, on 27-28th, while a White-spotted Bluethroat sang briefly at Grove Ferry, Kent, on 30th; further Bluethroats were reported from Wicklow Head, Co Wicklow, on 30th, Portmarnock, Co Dublin, on 1st and Soddy Gap, Cumbria, on 2nd. What might well have turned out to be the biggest bird of the week was a Rock Bunting reported by a visitor on Holy Island, Northumbs. Seen briefly on 27th, it was not reported until 1st and there has been no sign since. 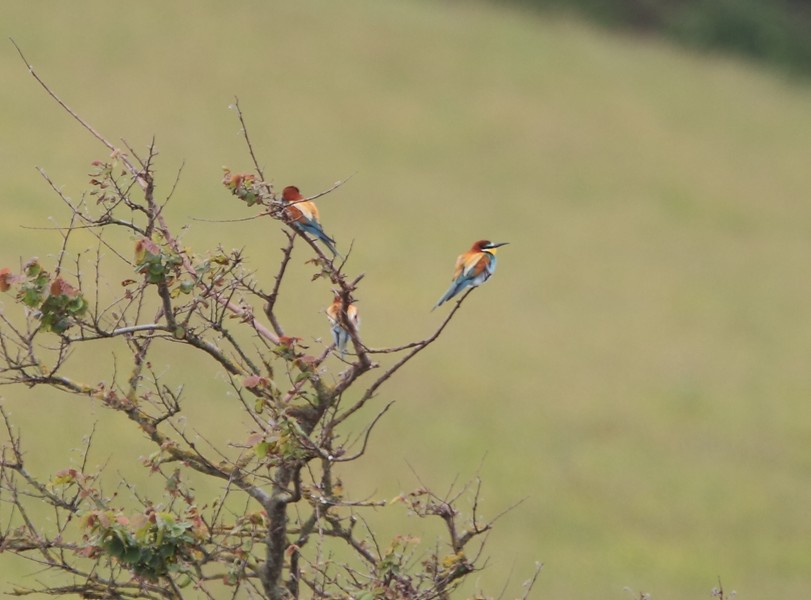 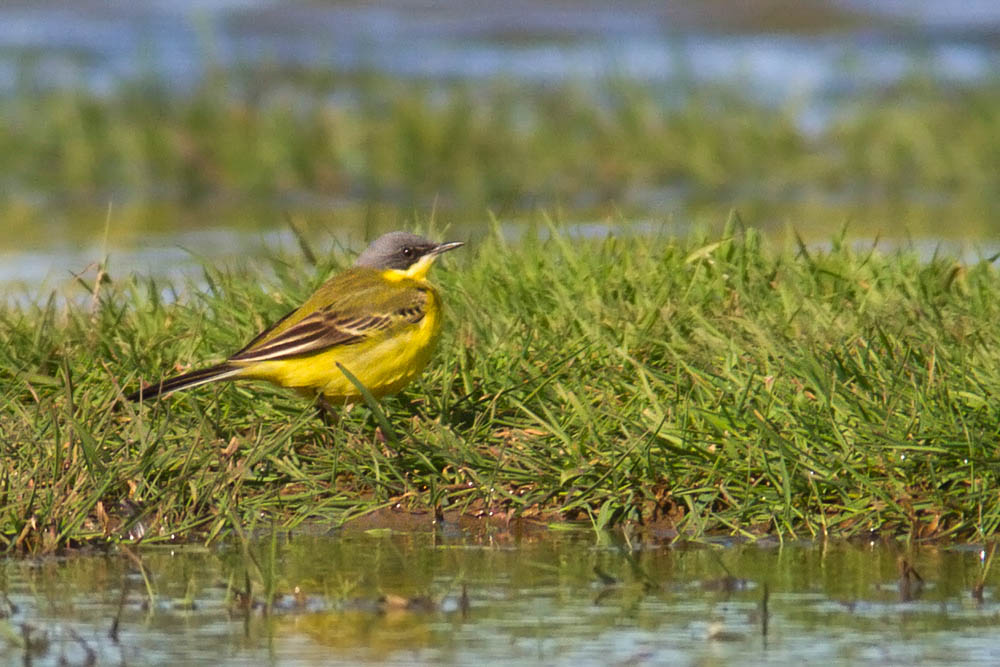 Unfortunately for Belgian listers, the Steppe Eagle found near Marche-en-Famenne on 28th proved to be an escape; a first-summer Bateleur on the Judean Plains near Nachla on 31st arguably faces similar scrutiny but the more pressing matter for Israeli birders is that it quickly disappeared, with no sign the following day.

The Black-browed Albatross once again returned to Heligoland during poor weather on the evening of 1st and was still present there early on 3rd, after being seen in Denmark on 28th. A Black-winged Kite was in Friesland, Netherlands, on 27th, with a Long-legged Buzzard in Groningen on 28th. Azorean Red-footed Falcon records came from Santa Maria, Faial and even Corvo.

News came to light of a Lesser Flamingo present near Paphos, Cyprus, having first been discovered there on 12 May. This is quite probably the bird seen earlier in the year in both Israel and Turkey, and represents a first for the island. A pair of Kelp Gulls were photographed at Cap à Lamhiriz — some way south of Dakhla, Western Sahara — on 31 May.

Our Photo of the Week section has moved! From now onwards, POTW will appear in its own article. This week's can be found here.