One suspects that if we'd simply copied last week's Review of the Week and pasted it here, changing a few dates here and there, many of you wouldn't have noticed. This really reflects the state of play across Britain and Ireland at present, with very little dynamism to proceedings and precious few new rarities. That said, spring is only a few weeks away now ...

In a week which saw the BOURC add the 600th species to its British List, present highlights were very much 'as you were': the Glaucous-winged Gull continues to loaf around Castletownbere, Co Cork, and the Hudsonian Whimbrel was still at Perranuthnoe, Cornwall, on 23rd, though neither Pacific Diver was recorded this week.

A new White-billed Diver just west of Ballyvaughan, Co Clare, on 18th was a hint that the usual spring build-up of this species is now just around the corner; another was found off the coast of Coll, Argyll, on 23rd. Five Surf Scoters included the young male off Filey Brigg, N Yorks, all week, with the immature continuing off Guther's Island, Scilly, and adults still in County Kerry, Lothian and Shetland. The drake King Eider was seen again off Ballyconnell, Co Sligo, on 20th — the first sighting in almost a month — and 23rd, and females continued off Rosslare, Co Wexford, and Ruddon's Point, Fife.

The drake American Black Duck continued to show regularly at Baltimore, Co Cork, and was still present on Tuesday. A total of six drake American Wigeon included a new bird at Aqualate Mere, Staffs, from 21st, while the North Yorkshire male returned to Scalby Mills on 20th, after a week at Castle Howard. Elsewhere birds were in Lancashire, Northumberland, Highland and Co Leitrim. Ten Green-winged Teal included a new drake at Dunfanaghy, Co Donegal, on 21st and the Portuguese-tagged male still near Blythburgh, Suffolk. 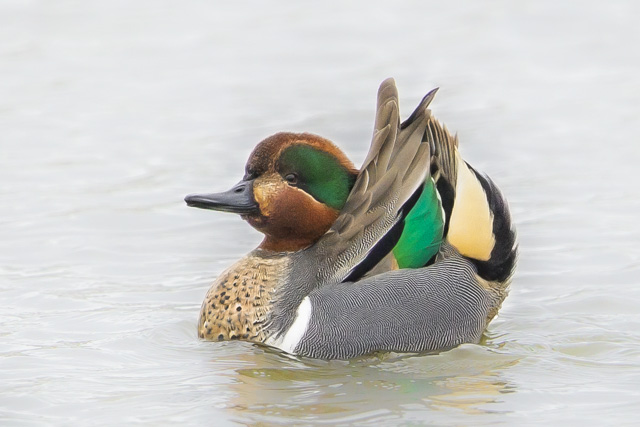 A female Hooded Merganser was at Corsham Lake, Wilts, on 23rd — as ever, its origins will be debated but it has evidently been a good winter for the species in Europe with two in the Azores, two in Iceland and a female in the Faroe Islands. Four Lesser Scaup comprised familiar drakes still at Dargan Bay in Co Antrim, Tullaghnafrankagh Lough in Co Galway, Cardiff Bay in Glamorgan and Dozmary Pool in Cornwall. At least 11 Ring-necked Ducks were reported around Britain and Ireland, including two drakes at Milton Loch, Dumfries & Galloway, on 23rd and two still together in Co Waterford. A drake at Lough Leane, Co Kerry, on 19th was the first time this bird has been reported since November. The only female reported was the continuing bird at Tittesworth Reservoir, Staffs. Four of the five Ferruginous Ducks seen last week remained, the only to disappear being the young female in West Yorkshire, which was not seen past 15th. 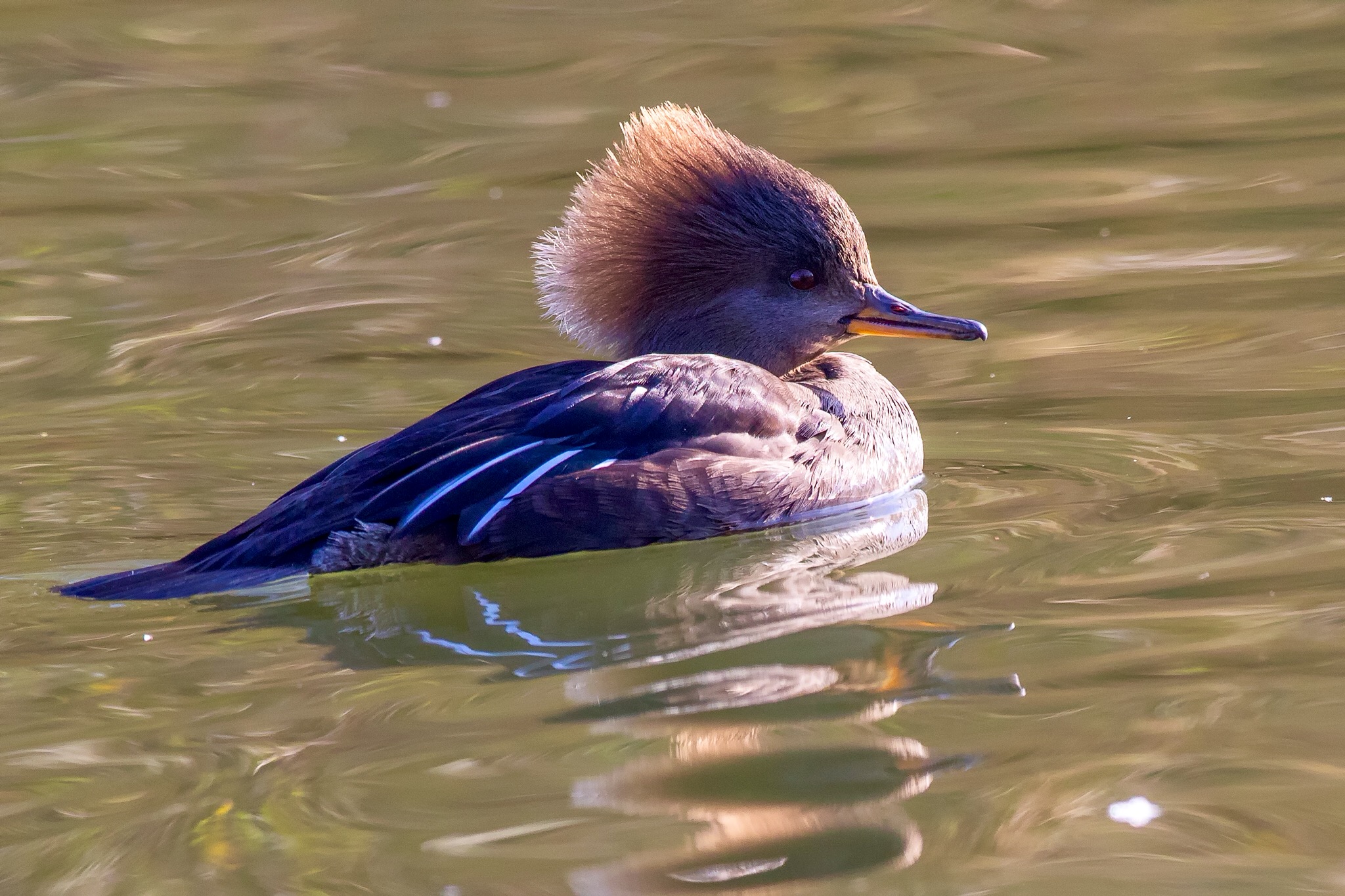 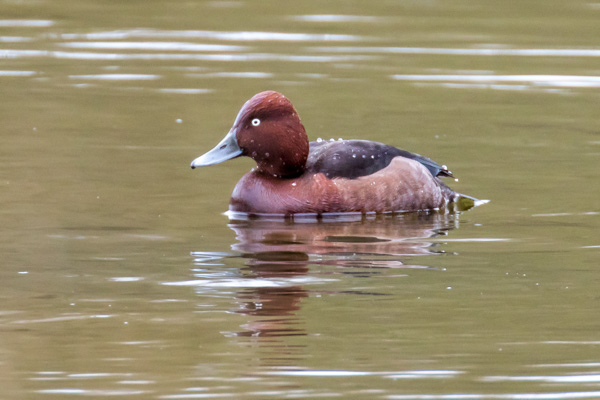 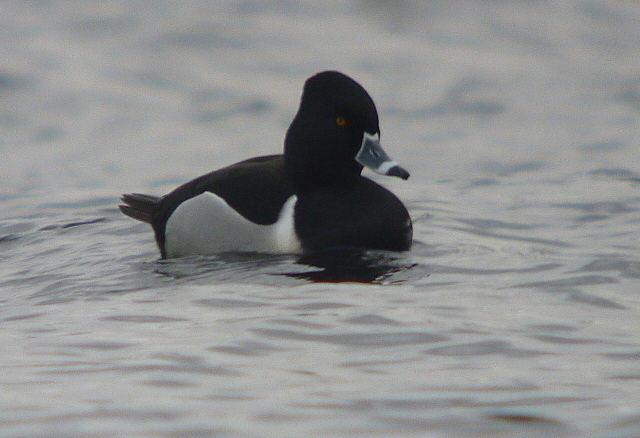 It almost goes without saying that both the Richardson's Cackling and Todd's Canada Goose were still with Barnacle Geese at Lissadell, Co Sligo, this week. The four Snow Geese continued to roost at Loch of Skene, Aberdeenshire, while the white morph was still roving around Dumfries & Galloway to 21st, when it was at Caerlaverock; a possible intermediate morph was also seen there on 22nd. Black Brant reports came from Devon, West Sussex, Kent, Essex, Norfolk and East Yorkshire.

The Cattle Egret at Burgh St Peter, Norfolk, was last seen on 19th but the Suffolk bird lingered near Iken all week. In Kent one remained near Hareplain and at least one was still in Somerset; in Ireland birds were in Counties Limerick and Wexford. The deluge of Glossy Ibis has subsided in recent weeks and birds were reported from just nine sites this time, the highest count being two at Slatty's Bridge, Cork Harbour. Popular birds remained at Marazion, Cornwall; Seaton Marshes, Devon; and Pett Level, E Sussex.

A white-morph Gyr Falcon at Kyles Paible, N Uist, on 21st is presumably the wide-ranging bird seen several times on the Uists in recent weeks. The Northern Harrier was again reported from North Ronaldsay, Orkney, on 21st, while Norfolk's Pallid Harrier was at Flitcham on 17th and was seen near-daily at Roydon Common as it arrived to roost in the evenings. An adult Rough-legged Buzzard was a good inland find near Thorney, Cambs, on 22nd, with others still in Essex, Norfolk and Shetland. A male Snowy Owl seen near Lairg, Highland, recently is presumably the bird of debated origin — some say it's an escape while others are convinced a genuinely wild male has been roaming about this area in recent times.

The Lesser Yellowlegs was seen again at Burgh Castle, Norfolk, on 19–20th but continues to prove less than straightforward to connect with. The wintering Spotted Sandpiper was also still in residence at Pilmore, Co Cork, on 23rd. Long-billed Dowitchers were seen regularly in Hampshire and Northumberland, while the Leicestershire bird was again commuting between Watermead Country Park and Wanlip Meadows on 21–22nd before it relocated to Rutland Water on 23rd. 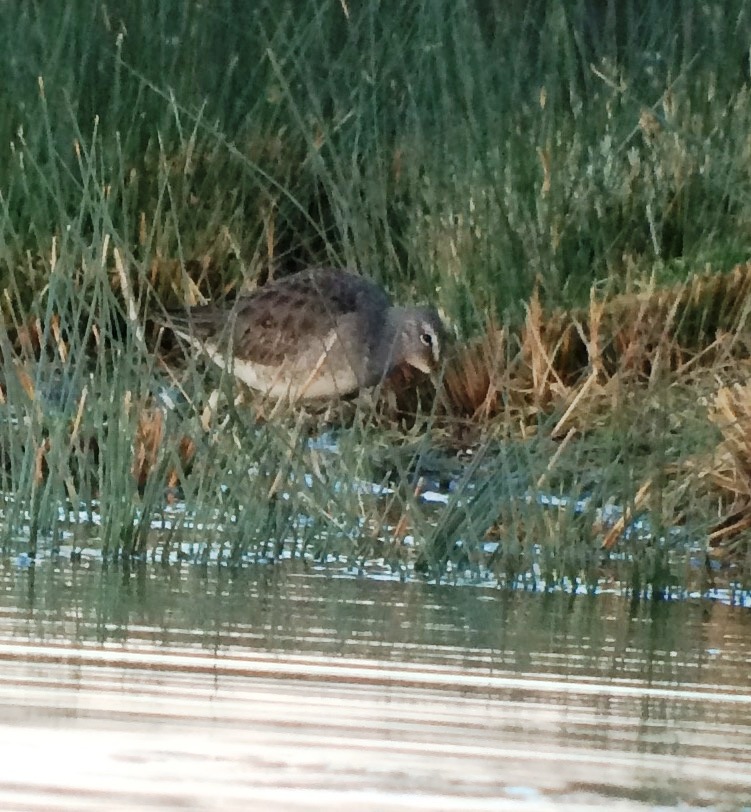 The juvenile American Herring Gull was again seen roosting on St Clement's Isle at Mousehole, Cornwall, on 19th and 20th but otherwise remains elusive. The Dawlish Warren Bonaparte's Gull was still on show and the Caithness bird again reappeared in Thurso on 23rd. Fewer than 20 Ring-billed Gulls were noted around Britain and Ireland, with at least three around Cork City. Both Glaucous and Iceland Gulls numbered into the fifties but Kumlien's Gulls failed to make double figures. Of the Glaucous Gulls recorded, an adult at Stanwick Gravel Pits, Northants, from 22nd was found to be wearing a red ring, making it the returning bird which was initially ringed in Essex in March 2015 and subsequently seen in Northamptonshire that spring. Caspian Gulls remain quite numerous with several good counts emanating from around Yorkshire, while three (adult and two first-winters) near Dunbar, Lothian, on 23rd is a superb Scottish multi-occurrence. 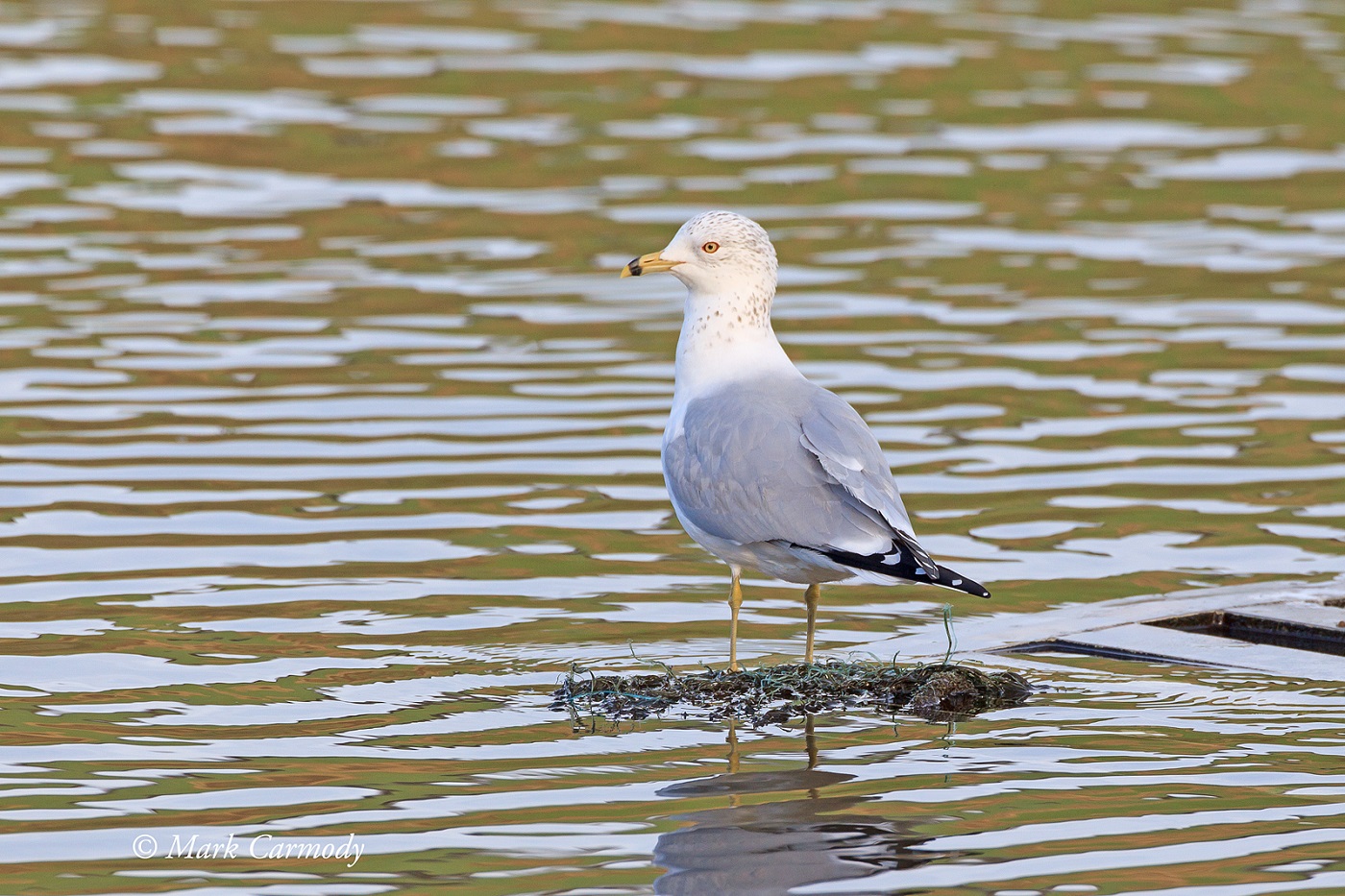 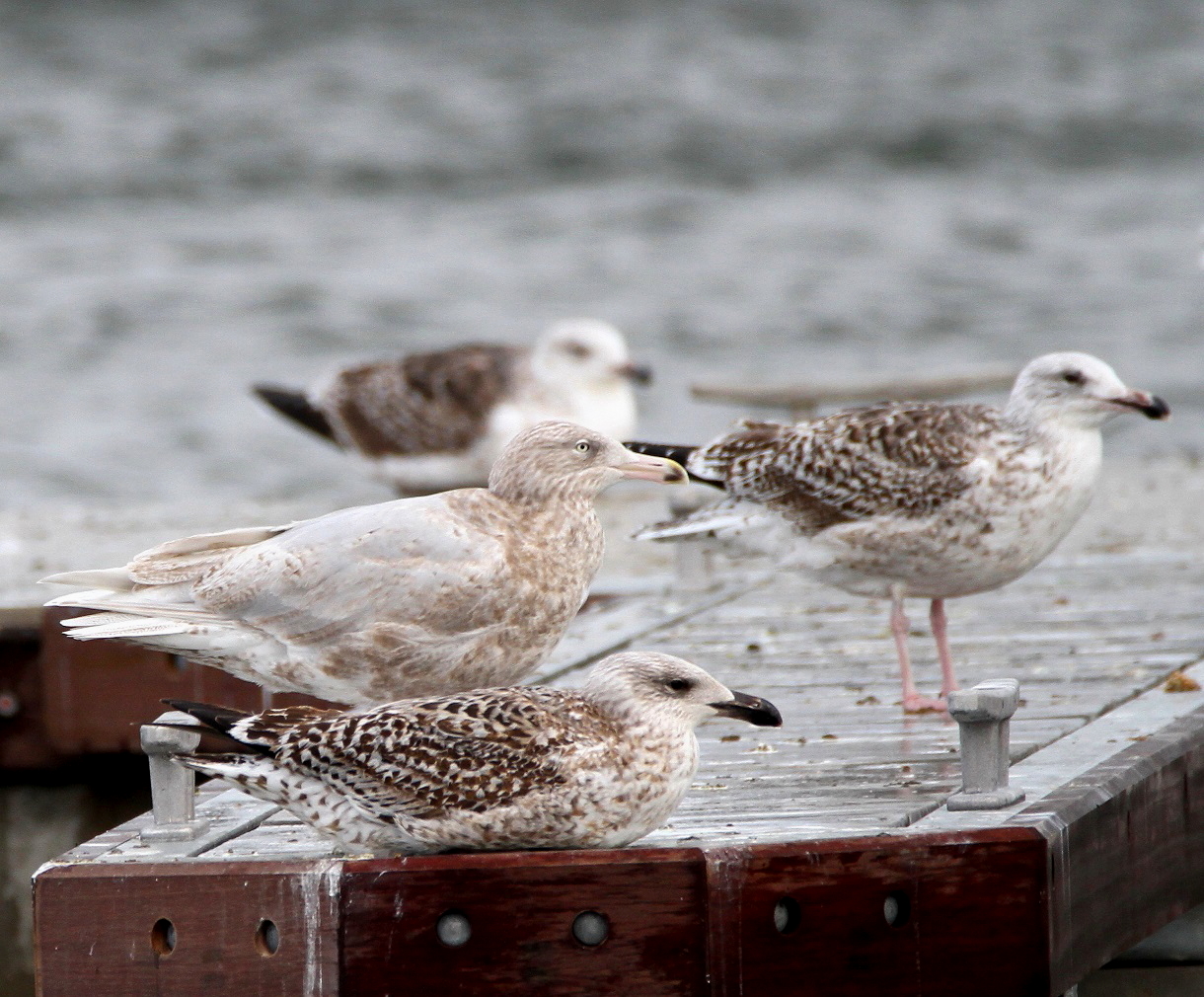 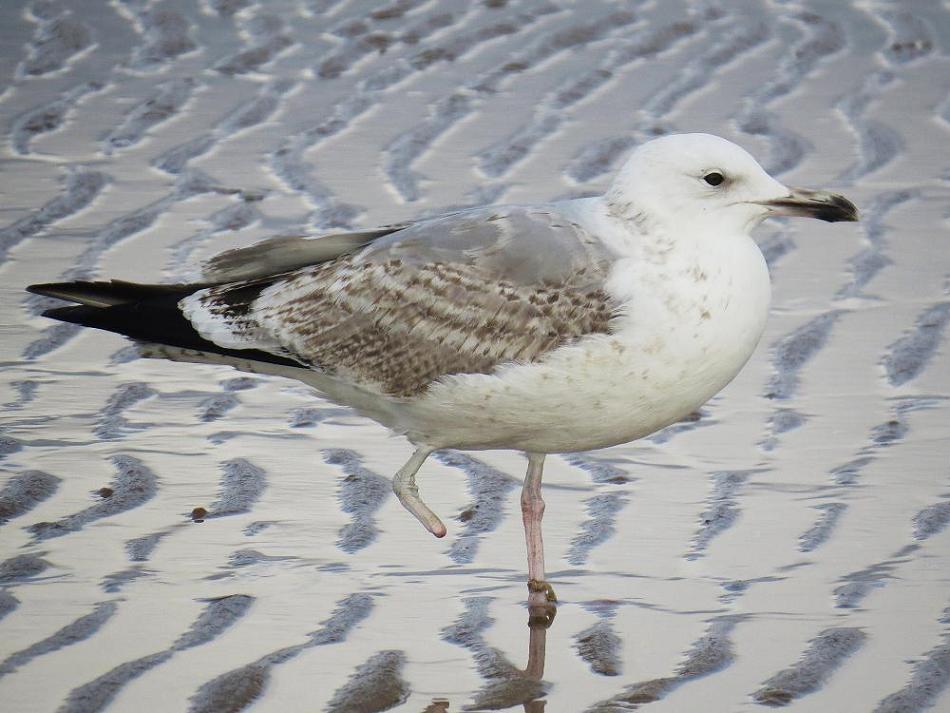 Nothing much has changed with the Hoopoe still at Wall Heath, Staffs, and Shore Larks still in Norfolk, Cleveland and Kent, though the Hartlepool flock appear to have reduced to two. Two Richard's Pipits were found at Blackhall Rocks, Durham, on 21st and were still there on 23rd; two were still at Flamborough Head, E Yorks, to 19th and the Kent bird was still on Sheppey on 23rd. Two Black-bellied Dippers were together at Kirkhouse Burn near Voe, Shetland, on 19th. 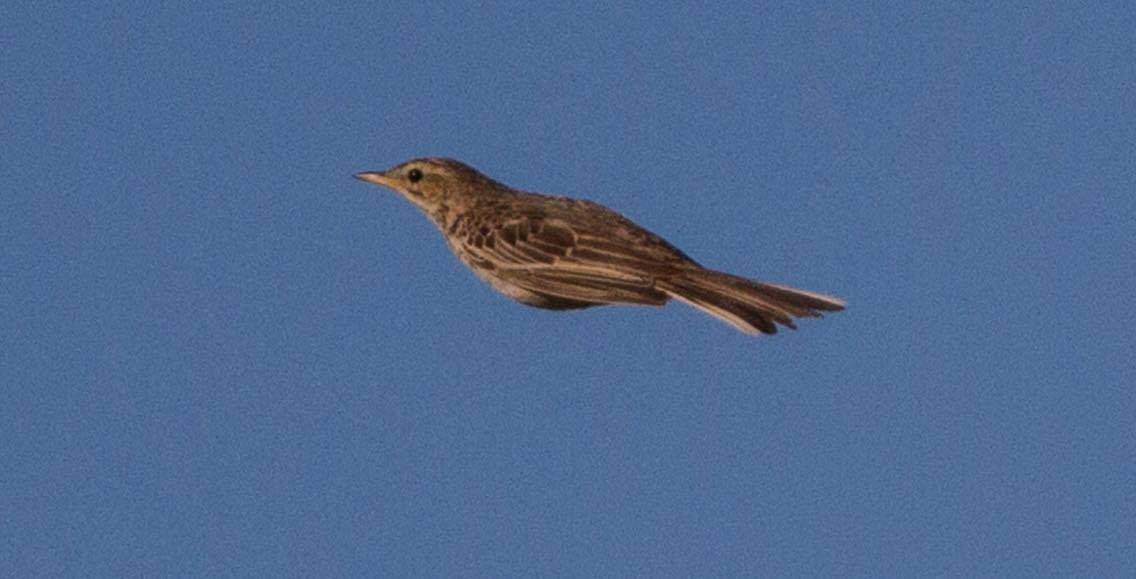 Yellow-browed Warblers were reported from seven sites, all but one in Cornwall — the exception being a bird in Exeter, Devon, on 20–21st. Of the Cornish records, two new individuals involved birds along the Tresilian River near St Clement from 20th and at Saltash on 23rd.

Two Penduline Tits remained near Gloucester all week and the two were again at Saltholme RSPB, Cleveland, on 18–19th. A further two continued to pop up intermittently at Titchfield Haven, Hants, until at least Tuesday. 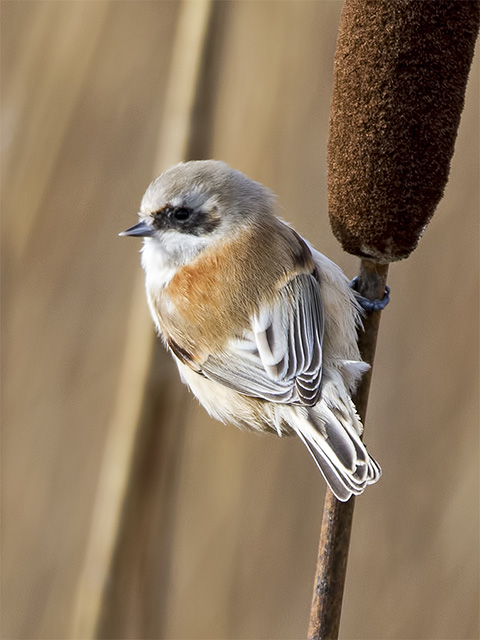 Two further Allen's Gallinules were discovered this week, the better of which was a confiding juvenile frequenting the tiny pools at Gleb Jdiane — a well just inland from Dakhla, Western Sahara — from 18–21st. The second was altogether less healthy and was taken into care at Puerto del Carmen, Lanzarote, on 18th. 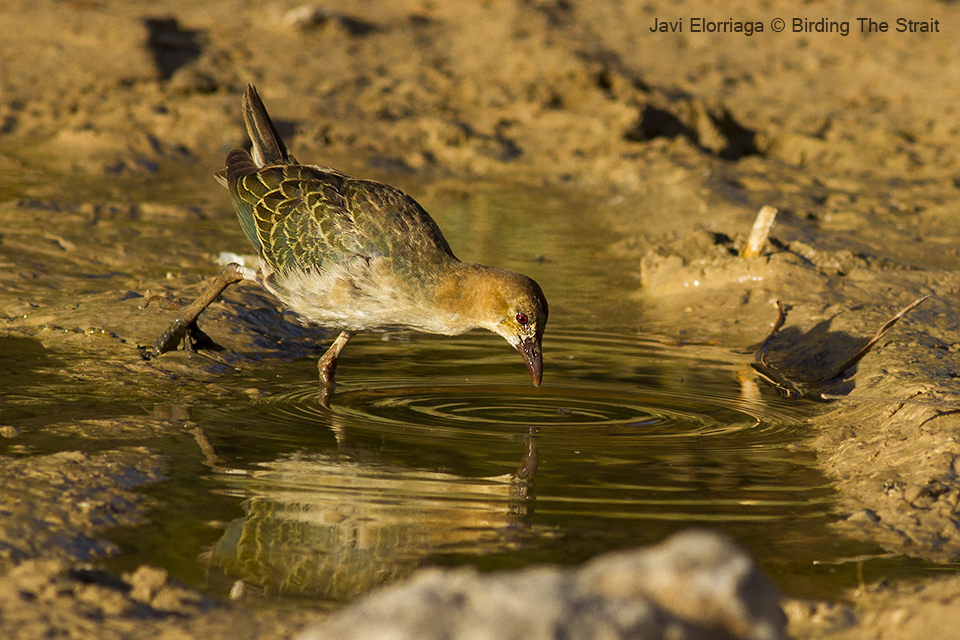 Another Afrotropical vagrant was the continuing Black Heron at Barragem do Poilão, Santiago, Cape Verde. A Namaqua Dove at Mandria, Cyprus, on 22nd was just the fourth for the island, while the eighth or ninth White-crowned Black Wheatear appeared at Cape Greco on 23rd. A very good Italian record concerned a Lesser Flamingo near Comacchio, Emilia-Romagna, on 21st and a Black-winged Kite was at Caramagna Piemonte on 17th. 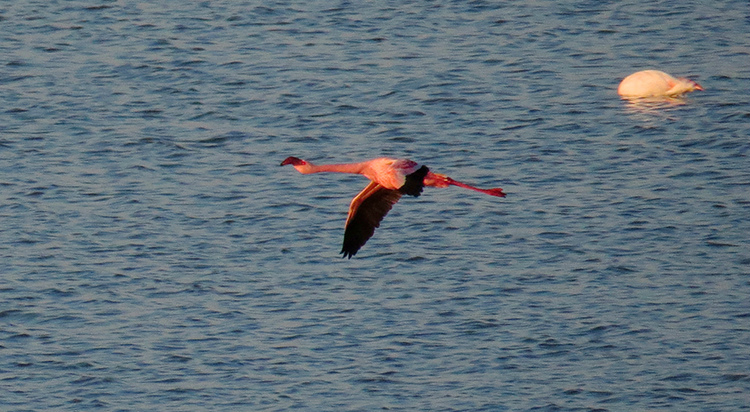 Spain's Solitary Sandpiper lingered another week near Cuevas de Almanzora, Almería, and Iceland's triumvirate of Hooded Merganser, American Coot and American White-winged Scoter all hung around near Reykjavík. The Redhead was still on its favoured canal in Groningen, Netherlands, on Friday and the Siberian Rubythroat put in another week of residence at Hoogwoud. Kuwait's second-ever Goldfinch was at KABD Reserve on 23rd.