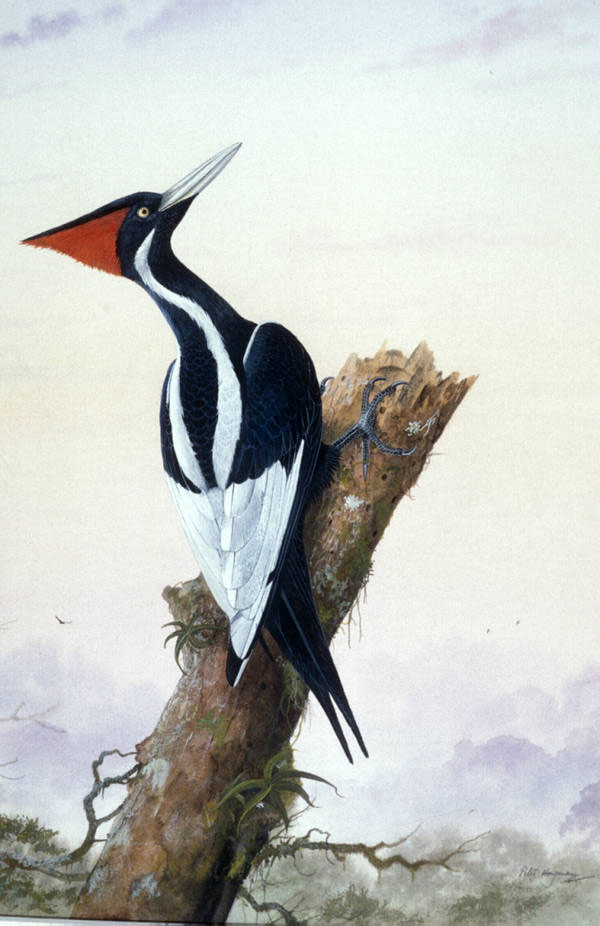 Researchers from Auburn University and the University of Windsor report 14 sightings of Ivory-billed Woodpeckers in forest along the Choctawhatchee River in the panhandle of Florida between May 2005 and May 2006. All but three of the observations were naked eye only without optical aids, and no photographs of the woodpeckers were obtained. On two occasions, two birds were seen together.

In addition, on 41 occasions the researchers heard sounds that matched descriptions of Ivory-billed Woodpeckers, and using automated listening stations and audio recordings from hand-held video cameras isolated 99 "double-knock" sounds and 210 "kent" calls. These, the researchers say, match historical descriptions of Ivory-billed Woodpecker acoustic signals. Examples of each are available as supplementary supporting material and can be downloaded at: http://www.ace-eco.org/

This evidence, the researchers state, "suggests that Ivory-billed Woodpeckers may be present in the forests along the Choctawhatchee River."

Last year, Ivory-billed Woodpeckers were reported in Arkansas. Prior to those reports, the last fully documented USA sighting was in Louisiana in 1944, and many believed the species extinct both in the USA and in Cuba, the only other country where it occurred.

"It would be wonderful to confirm that a viable population of Ivory-billed Woodpeckers exists, and we hope the search by the Auburn research team will lead to just that," said Greg Butcher, Director of Bird Conservation for National Audubon Society, the BirdLife Partner in the USA.

He added: "This announcement is a reminder of why it is so essential that we protect bottomland forests, wetlands and coastal habitats across the south-east, and these new sightings should reinvigorate efforts to find the bird in other portions of its historic range."