Wildfowl of Europe, Asia and North America by Sébastien Reeber 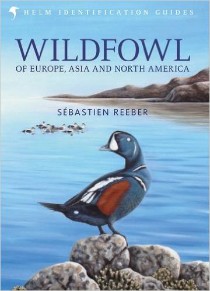 What initially stood out to me about Wildfowl of Europe, Asia and North America was the presence of just a single name on the cover. Many similar titles in the Helm Identification Guides series have several authors or, at the very least, an author and an illustrator. Rather impressively, Sébastien Reeber has both authored and illustrated this latest instalment in this long-standing and well-respected series — particularly notable when one considers that Anseriformes is among the most complex, variable and well-studied avian orders.

Such a monumental task may instil an apprehension that the author might have been overambitious, but on opening the book, this fear appears unfounded. This was perhaps helped by reducing the species considered to the Holarctic, rather than the entire world — as in Helm's original publication on the same topic, Madge and Burn's Wildfowl: an Identification Guide.

The plates are, on the whole, excellent; Reeber has proved himself an extremely talented artist as well as an accomplished author. There are one or two slightly less impressive examples (bean geese being one), but the variation and diversity among wildfowl is always going to be difficult to capture perfectly and it would be unfair to be too critical. The photography is also of a very high quality, avoiding use of captive examples as far as possible: past hybridisation, limited gene pools and other contributing factors have the potential to give captive birds a very different look from their wild counterparts.

The text is substantial and detailed, quenching the thirst of anyone with an interest in wildfowl of the Holarctic. Taxonomic talking points include the split of White-winged Melanitta deglandi and Siberian M. stejnegeri Scoters into two species, while Black Brant leaves behind its familiar taxonomic name of Branta bernicla nigricans to become B. b. orientalis — the former now attributed to Grey-belled Brant. In fact the author proves quite authoritative as he introduces the current taxonomy of 'Brent Goose' and its significant shortcomings, based on available scientific evidence. The text for Canada Goose illustrates just what a minefield the white-cheeked goose complex is, but is nicely structured and explains the present situation very well.

Wildfowl — in particular ducks — are notorious for hybridisation. In some species it is regular, even quite common, forming a significant part of their biology and evolution. It is great to see that hybrids are tackled in great detail by Reeber — I cannot recall any other publication offering such extensive treatment. Some of the most extraordinary-looking hybrids occur among ducks, and plates 39 and 40 are not to be missed. Aythya hybrids are also treated extensively, including subtle combinations such as females of Pochard × Canvasback and Redhead × Ring-necked Duck. It's good to see Baer's Pochard hybrids covered, too, given the dwindling world population and ever more prominent issue of inter-breeding among this and similar species.

With such a well-studied and familiar subject, the bar was set high to deliver a successful publication, yet Reeber has achieved this comfortably. What's more impressive is that he did it on his own. Bringing together just about everything you'd need to know about the Holarctic's wildfowl under one banner, this monograph is set to become the standard reference for its subject. I could find very little at fault with it, and strongly recommend it as a beneficial addition to any birder's bookshelf.