As far as quality mid-range optics are concerned, American-based Vortex has always been worth keeping a close eye on. I’ve been consistently impressed with both its binoculars and telescopes (see, for example, Birdwatch 273: 70-71 and 262: 70-71 for reviews of the Razor 8x42 HD and Razor 50 HD respectively); its products are clearly aimed at capturing potential purchasers interested in top-tier equipment at a lower price point.

The latest version of the Razor 85 mm telescope was launched in October 2016, alongside the smaller 65-mm model. Its evolutionary path followed the latest products in the Vortex range, so once the chassis design had been finalised it was natural that the scope would inherit the aesthetics first seen in the Razor HD binocular range. 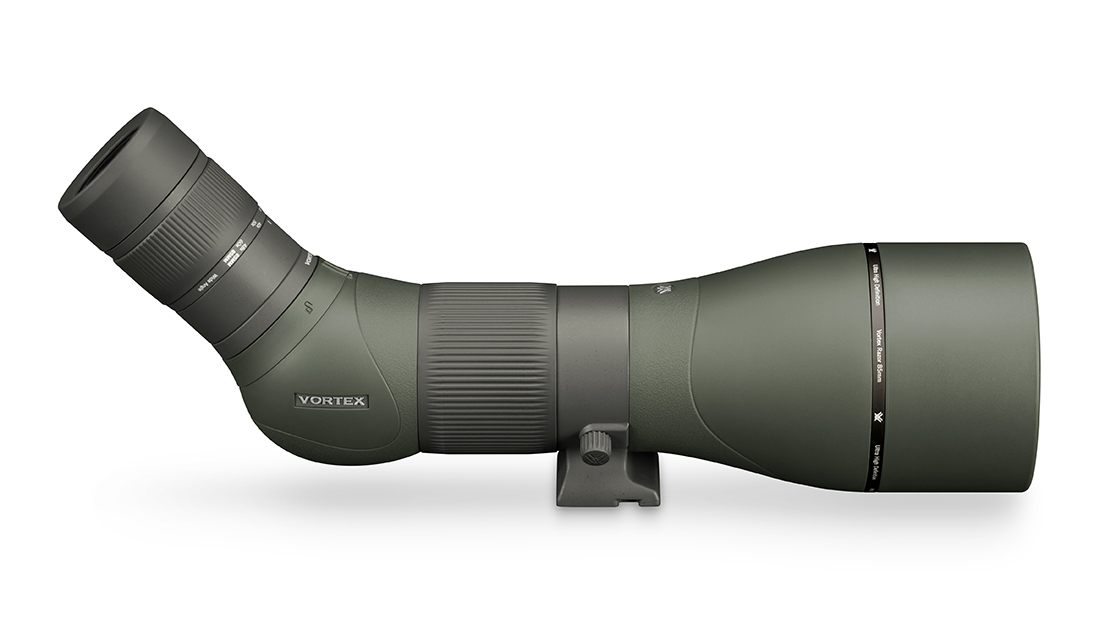 The resultant appearance is clean, sleek and rather compact for an 85-mm scope. Exuding quality and finished in a subtle grey-green, the Razor 85 sports a rubber-armoured magnesium alloy body. A 360-degree rotating tripod foot click-stops in eight equidistant positions, although it can be secured at any point around the body’s circumference. The foot is designed to lock directly into a standard Manfrotto tripod head, obviating the need for a quick-release plate.

A pull-out lens hood extends and retracts effortlessly. At the opposite end of the scope, an integral rotating lock prevents the zoom eyepiece from becoming accidentally disengaged.

The move from the old model’s dual-focus wheels to a dual-geared single barrel, helical focus ring is designed to improve the scope’s overall durability and to simplify the focusing operation. Approximately three fingers wide, rubber covered and offering plenty of grip, I found this wheel to be a wonderfully smooth turner and focusing is achieved easily throughout the full range of the 27-60x magnification.

Locking in the wide-angle zoom eyepiece is simple enough and it delivers a greater field of view than the previous version, despite starting at 27x rather than 20x magnification. Again, plenty of grip is offered by the zoom control, but for me, there was a little too much turning resistance during operation. However, coupled with the upgraded optical specifications within the body, the resulting image is rather nice.

Looking at the advances over previous Razor HD scopes, Vortex has upgraded to a Schmidt-Pecan prism in the optical system, alongside enhanced proprietary ‘XRPlus’ premium lens coatings applied by ‘plasma tech’ on all air-to-glass surfaces. The triplet apochromatic objective lens system remains the same, but uses higher-grade HD glass. These together are said to give improved colour rendition and image brightness over the previous model.

The proof of the pudding is in the field, where it all comes together to deliver a highly acceptable image. Edge-to-edge sharpness is a positive feature, even at the highest magnification, although with the four-position click-stop eyecup completely extended I was unable to see the full field of view. Both colour and contrast accurately hit the spot, while the scope has a ‘warm’ rendition to the image as opposed to the ice-cold feel of some optics. It’s a matter of personal preference, of course, but some of the latter may give the impression of a brighter image.

The Razor’s image is nicely bright, and in conditions of low light intensity it was more than acceptable. Viewing against bright backgrounds also presented few problems. Encountering a mixed loafing gull flock set against the sun in a local river valley provided ample opportunity to appreciate the subtle differences in plumage tones between individuals of different ages and to test for chromatic aberration. This is around about the level I would expect in a scope of this calibre, being present in the centre of the field, when dark objects are viewed against bright, harshly lit backgrounds. Nevertheless, it gave me no cause for concern during general viewing.

To sum up, this is another attractive Vortex product and well worth considering if you are in the market for a mid-range scope. Competition is fierce and some internet retailers are currently offering substantial discounts on the suggested retail price. Vortex is also offering a ‘VIP Unlimited Lifetime Warranty’ which includes covering accidental damage that renders the scope unusable, while for the remainder of 2018, a Phoneskope eyepiece adapter (SRP £25) is included free of charge as part of the package.