This lens has been a long time coming. Canon's original 100–400 mm zoom was introduced as long ago as 1998 and remained in the company's lens line-up for an impressive 16 years, but latterly it had been showing its age and was in need of a serious update.

Its replacement may share the same model designation and focal length, but it is a very different beast and a significant improvement in almost every respect. Canon has started afresh with the design, replacing the original 'trombone'-style zoom with a grip-and-twist mechanism, and remodelling the tripod foot assembly. A narrow ring behind the main zoom ring tightens or loosens resistance as required, and behind that is the manual focus ring. 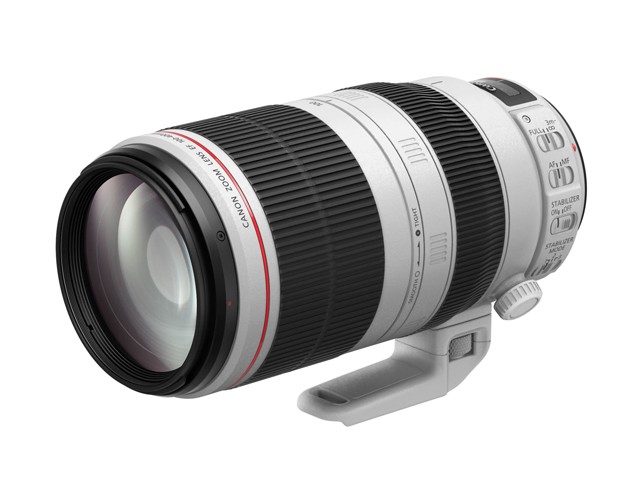 The new lens has state-of-the-art image stabilisation rated at four stops instead of its predecessor's two, and has an additional third stabilising mode, these major improvements significantly adding to the 'keeper rate' of shots taken.

I used the original 100–400 mm zoom for many years, but while happy enough with the results I eventually replaced it with a prime 300 mm f4 lens and 1.4× extender. Although I missed the flexibility of the zoom's wide focal range, the 'fixed' 300 mm was visibly sharper, even when used with an extender. The new 100–400 mm would surely be sharper than the original, but given the inherent problems with zoom design, would it come close to the prime 300 mm?

To find out I put it to the test using a Canon EOS 7D MKII body, which features the company's APS-C sensor. This has an effective built-in magnification factor of 1.6×, rendering the focal length of this lens equivalent to 160–640 mm. It was immediately obvious from my first series of images of garden birds that the image quality was superior to the original zoom, but it was a much closer call compared to the 300 mm f4. Careful examination of images taken at 300 mm with an aperture of f5 on both lenses indicated the zoom just had the edge on sharpness; interestingly, it also beat the 300 mm on chromatic aberration, which was barely discernible in another series of sample images.

I was also surprised to discover that the new 100–400 mm lens would, unlike the old model, autofocus when used with a 1.4× EF Extender III, which gave it a maximum focal length of 560 mm (or 896 mm on a body with an APS-C sensor); at least this was the case with the 7D MKII. This takes it into the realms of more serious telephoto capability, albeit with a minor fall-off in image quality; apparently autofocus is also possible with a 2× EF Extender III, and even using both extenders together, but I was unable to test this (autofocus is also likely to be slower with the 2× extender and this capability is probably limited to certain EOS bodies, something worth confirming with Canon if this lens interests you).

The only obvious downside to the new 100–400 mm zoom is the increase in weight, the premium being 19 per cent over the original model — a small minus point in view of the much-improved lens design, image stabiliser system and optical performance. Other reviewers have also commented on the price: while it may not be the cheapest telephoto zoom around, in my opinion it is certainly the best in this sector of the market, and in any case Canon's L series lenses tend to hold their value very well. Regard it as an investment — it will be a valuable asset in any bird photographer's backpack, offering excellent image quality and a focal length range to suit almost every circumstance. A removable lens hood, case, strap and manual are also part of the package.