Set to run alongside the original Nature DX binocular series, Celestron has launched a quality upgrade which uses ED glass in the objectives. The new models are designed to offer superior imagery within this already economically priced range and, although there is a premium to pay, the result still sees the range maintaining its affordability at the lower end of the market.

There are some clear differences between new and existing models, reflecting both aesthetics and functionality. Overall, the new 8x42 is a little larger in all dimensions and weighs 705 g, representing a 12 per cent increase over the standard model. The weight difference is primarily down to the use of ED glass in the objective lenses and the more robust chassis structure of the Nature DX ED's design. However, the new model still feels compact and surprisingly light due, in part, to the continued use of a polycarbonate chassis.

Celestron has also taken the opportunity to introduce more modern aesthetics, adding swirling, curvy, textured areas to the otherwise smooth rubber armour – primarily to improve ergonomics by helping to increase grip in the areas in direct contact with your fingers. The slim, sheeny, orange ring around the base of the focus wheel, along with silver livery, set against the black body sheen, lend an almost 'techy' feel to the binocular. 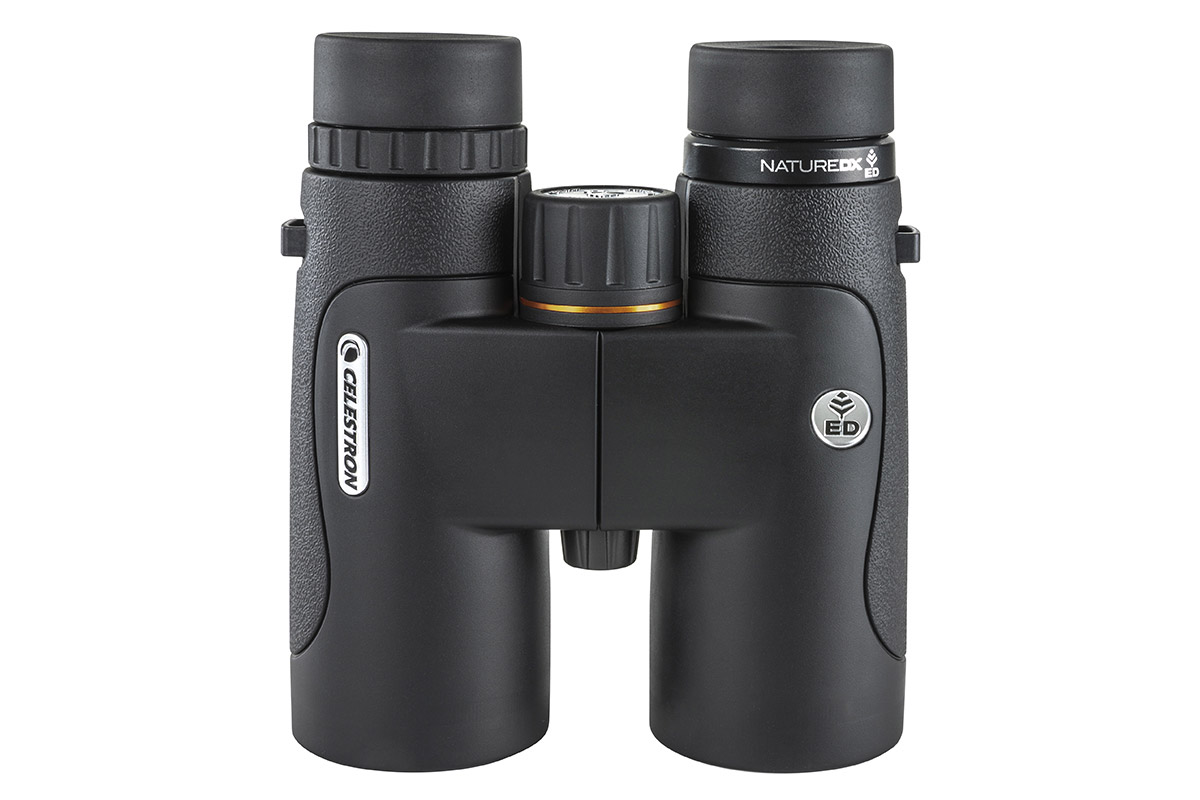 Both the focus wheel itself and the dioptre control have also been redesigned, with indented surfaces replacing the raised ribbing of the non-ED model. Extendable rubber-covered eyecups complete the package of physical attributes. These are quite flat edged and I found them a little hard against the eye sockets. Unlike in many other binoculars, however, I was pleasantly surprised to find I could still see the entire field of view with the eyecups fully extended to the third click-stop position above the base setting.

Viewing is a generally comfortable experience, with the DX ED easy to hold, the strap lugs partly recessed to minimise digging into your hands and the focus wheel turning freely and smoothly. The last requires approximately one and three-quarters anticlockwise rotations to go between close focus and infinity, but short range to long distance can be achieved quite quickly in around one third of a turn. I discovered I couldn't focus on anything closer than 2.8 m, contra the manufacturer's close focus figure of 2.0 m.

The integration of ED glass lends clarity and sharpness to the image, as well as reducing chromatic aberration, which I found to be at a very acceptably low level. There is, however, some quite broad image softening at the edges of the field of view. This is not wholly evident while generally observing birds across a variety of habitats; however, it becomes more obvious when looking at 'straight line' structures such as bricks and mortar or objects with a repeated linear pattern.

The binocular returns strongly contrasting, rich colours and imparts a certain level of quality to the observer. The overall colour rendition is that of warmth and not ice blue – something to bear in mind, depending on your preference.

The Nature DX ED is tripod adaptable for extended viewing periods, although the adapter is sold separately. Loosely tethered objective caps, an articulated rainguard and a soft carry case are supplied as part of the package.

I was not overly impressed with the neck strap, which is only of moderate width and isn't padded. However, in the grand scheme of things, this is peripheral to the binocular, which looks, feels and performs at a much higher level than its £219 price tag would suggest.