Birdsnap is a free electronic field guide covering 500 of the most common North American bird species. It is available as a website or an iPhone app. The former explains how the guide was developed by researchers from Columbia University and the University of Maryland using computer vision and machine learning to explore new ways of identifying bird species.

It claims Birdsnap can automatically find visually similar species and make suggestions for how they can be distinguished. In addition, Birdsnap uses visual recognition technology to allow users who upload bird images to search for similar-looking species. It will also estimate the likelihood of seeing a species at a given location and time of year based on sightings, and “uses this likelihood both to produce a custom guide to local birds for each user and to improve the accuracy of visual recognition.” 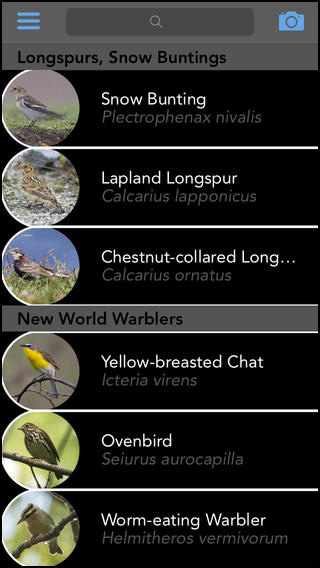 It’s important that potential users understand that Birdsnap will offer a list of visually similar species; it will not, at least currently, identify a bird definitively to species. Tested on a range of species from Brent Goose to Arctic Redpoll, the app produced lists of possible identifications ranging from a single species up to 12. In two out of 12 tested images the correct species was not in the suggested list; in five, the species in the image was listed first among the suggested birds. Failed searches that throw up no results qualify this with reference to image quality, and it would appear that only very good photos will generate results.

Each of the 500 species accounts in the app contains a range of images. Disappointingly, however, the descriptions provided are taken from Wikipedia and offer little by way of identification information. An animated ‘sightings map’ based on historical sightings shows the movement of species across the United States in a calendar year. Over an area this vast the value of the colour shades on the map is questionable from the perspective of determining identification, apart from perhaps a few species that have very restricted ranges.

If you’ve never looked at a field guide, but take excellent photographs of birds, Birdsnap will guide you towards a small range of species that will shorten the identification process on a mystery bird. Currently it isn’t a substitute for field experience and for keen birders offers little value despite being free. 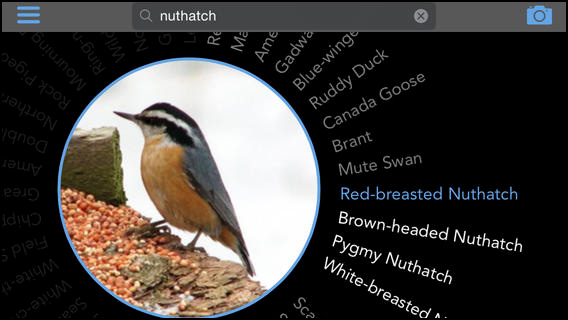