The oldest-known wild bird on the planet is breeding again on Midway Atoll National Wildlife Refuge in Hawaii.

The reserve in the middle of the Pacific Ocean is where Wisdom, a 66-year-old Laysan Albatross, has recently returned for the nesting season and has already laid an egg.

Midway Atoll is located on the far northern end of the Hawaiian archipelago and within the recently expanded Papahanaumouakea Marine National Monument. It is compromised of an outer reef that is almost five miles in diameter consists of 580,392 acres of submerged reefs, ocean and three flat coral islands (Sand Island, Eastern Island and Spit Island) totalling 1,549 acres. Midway Atoll was also the scene of the 'turning point of the Pacific' — the Battle of Midway, which was the Allies' first major naval victory against the Japanese during World War II.

Recently habitat restoration operations have shifted into high gear, and for several months, Dr Robert Taylor, a restoration ecologist from Oregon, has been working as the Restoration Data Management Specialist to restore functionality to Midway's GIS (Geographic Information System) program. Using GPS co-ordinates, Dr Taylor can map out the refuge so that the team can get a better sense of where invasive species are on the island to prepare and carry out strategic plans to restore the island to its native condition. 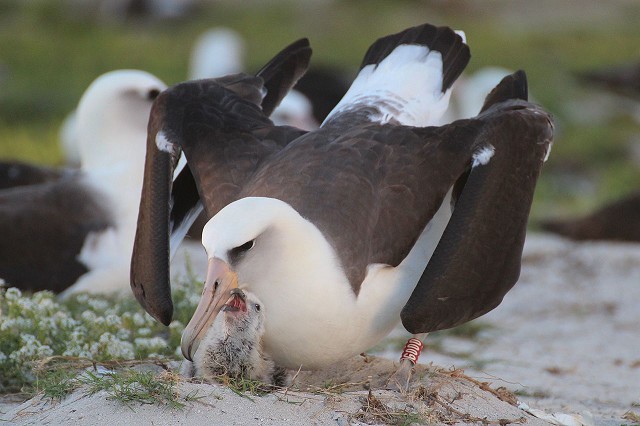 Midway Atoll has had some issues in the past with invasive plant species, but has been successful in eradicating those species. Crownbeard — a member of the daisy family — is no longer the dominant invasive plant on Midway due to the restoration work that has been conducted by individuals such as Dr Taylor and other conservation professionals. Conditions on the ground are changing rapidly and native plant restoration is, for many areas, one of the best tools for ongoing invasive plant control, rather than continuing to apply herbicide. Planting a diversity of native plants not only helps to fight invasive species, but also provides critical shade for thousands of vulnerable seabird chicks, protection from harsh winds, and gives the island strength and resiliency from an unnatural rise in sea levels.

Although many of us may never visit Midway Atoll in the middle of the Pacific Ocean, all of us can appreciate the beauty of its existence and understand that there are experts working hard to restore and protect it.