The oldest fossil of a modern bird yet found, dating from the age of dinosaurs, has been identified by an international team of palaeontologists.

The spectacular fossil, nicknamed 'Wonderchicken', includes an almost complete skull and dates back 66.7 million years – nearly one million years before the asteroid impact that wiped out all large dinosaurs. Found in a limestone quarry some 20 years ago, near the Belgian-Dutch border, it is the first modern bird from the age of dinosaurs to be found in the Northern Hemisphere.

A University of Cambridge-led team wrote in Nature that the bird would have weighed about 400 g, and been about half the size or less of a Mallard, similar in size to a Eurasian Teal. Detailed analysis of the skull shows that it combines many features common to modern chicken- and duck-like birds, suggesting that Wonderchicken would have been closely related to the last common ancestor of modern day chickens and ducks. 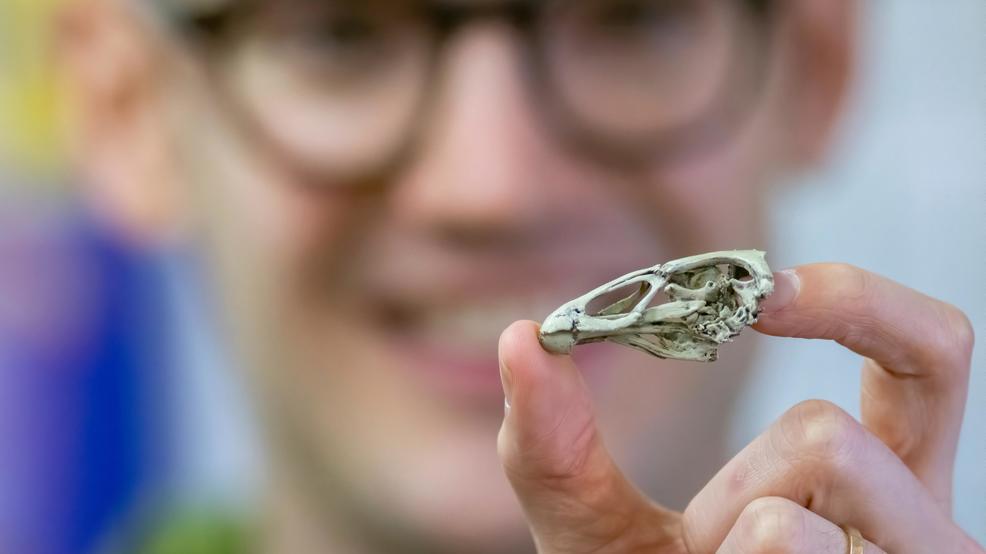 Researcher Daniel J Field holds a life-size 3D print of the Asteriornis maastrichtensis ('Wonderchicken') skull. With a face like those of today's chicken-like birds and a back portion similar to that of living duck-like birds, the skull comes from a creature that appears to be near the last ancestor shared by those two groups (Daniel J Field/University of Cambridge).

The team says the discovery also pushes back the date of the earliest-known modern bird. The record was previously held by Vegavis, fossils of which were discovered in Antarctica and dated to about 66.5 million years ago.

The researchers added that they believe the new fossil helps to clarify why birds survived the mass extinction event at the end of the Cretaceous period, while the giant dinosaurs did not.

The fossil doesn't look like much at first glance, with only a few small leg bone fragments poking out from a piece of rock the size of a deck of cards. However, even those small bones attracted the researchers' interest, since bird fossils from this time in Earth's history are so rare.

Using high-resolution X-ray CT scans, researchers delved into the rock to discover what was lying beneath the surface. What they saw proved to be the find of a lifetime: a near-complete 66.7-million-year-old bird skull.

"The moment I first saw what was beneath the rock was the most exciting moment of my scientific career," said Dr Daniel Field from Cambridge's Department of Earth Sciences, who led the research. "This is one of the best-preserved fossil bird skulls of any age, from anywhere in the world. We almost had to pinch ourselves when we saw it, knowing that it was from such an important time in Earth's history.

"The ability to CT scan fossils, like we can at the Cambridge Biotomography Centre, has completely transformed how we study palaeontology in the 21st century." 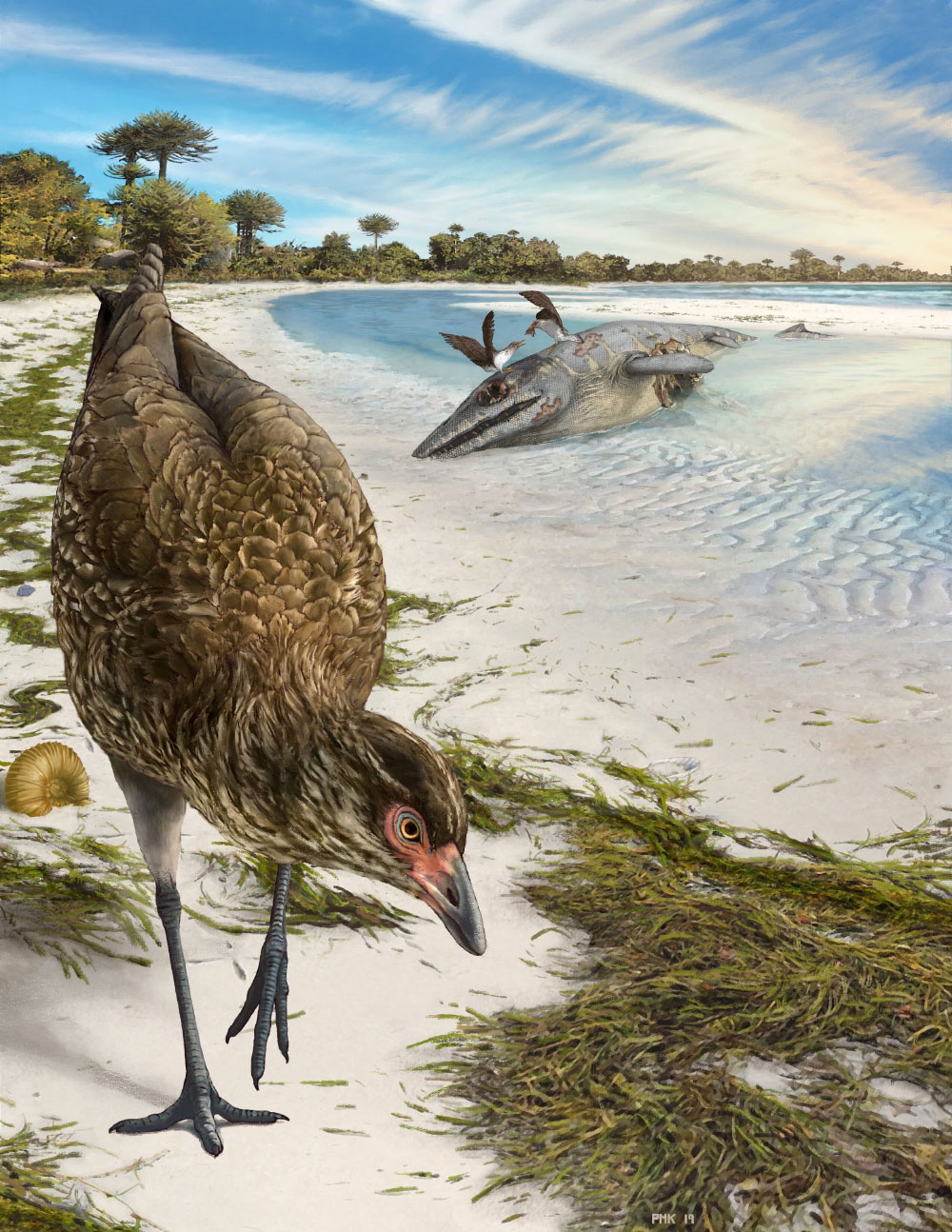 Artist's impression of ;Asteriornis maastrichtensis in its environment. Some 66.7 million years ago, parts of Belgium were covered by a shallow sea, and conditions were similar to modern tropical beaches like the Bahamas. Asteriornis lived at the end of the age of dinosaurs, a time when mosasaurs (giant marine reptiles) swam in the oceans and Tyrannosaurus rex lived on land. Asteriornis had fairly long legs and may have prowled the tropical shoreline (Phillip Krzeminski).

"Finding the skull blew my mind," said co-author Juan Benito, also from Cambridge, who was CT scanning the fossils with Field when the skull was discovered. "Without these cutting-edge scans, we never would have known that we were holding the oldest modern bird skull in the world."

The skull, despite its age, is clearly recognisable as a modern bird. It combines many features common to the group that includes living chickens and ducks – in fact, Field describes the skull as a kind of 'mash-up' of a chicken and a duck.

"The origins of living bird diversity are shrouded in mystery – other than knowing that modern birds arose at some point towards the end of the age of dinosaurs, we have very little fossil evidence of them until after the asteroid hit," said co-author Albert Chen, a PhD student based at Cambridge. "This fossil provides our earliest direct glimpse of what modern birds were like during the initial stages of their evolutionary history."

While the fossil is colloquially known as Wonderchicken, researchers have given it the slightly more elegant name of Asteriornis maastrichtensis, in reference to Asteria, the Greek Titan goddess of falling stars, and Maastricht, where it was found.

"We thought it was an appropriate name for a creature that lived just before the end-Cretaceous asteroid impact," said co-author Dr Daniel Ksepka from the Bruce Museum in Greenwich, Connecticut. "In Greek mythology, Asteria transforms herself into a quail, and we believe Asteriornis was close to the common ancestor that today includes quails, as well as chickens and ducks."

The fact that Asteriornis was found in Europe adds to its significance. "The late Cretaceous fossil record of birds from Europe is extremely sparse," said co-author Dr John Jagt of the Natuurhistorische Museum Maastricht in The Netherlands. "The discovery of Asteriornis provides some of the first evidence that Europe was a key area in the early evolutionary history of modern birds."

"This fossil tells us that early on, at least some modern birds were fairly small-bodied, ground-dwelling birds that lived near the seashore," added Field. "Asteriornis now gives us a search image for future fossil discoveries – hopefully it ushers in a new era of fossil finds that help clarify how, when and where modern birds first evolved."