Whooper Swan Y6K, which is being tracked using satellite technology by the Wildfowl & Wetlands Trust (WWT), seems to have flown into difficulty on its return migration to Iceland. It was last recorded at 10:46 on Friday the 16th heading towards the cloud of ash from the Eyjafjallajökull volcano. 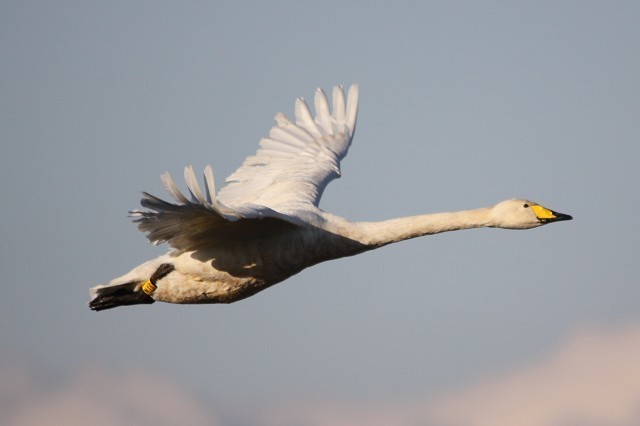 Researchers noticed the bird's position on the online tracking map. Y6K is approaching Iceland from the southeast, which is one of the main landfall areas for swans arriving in the country, but is also in line with the fallout from the volcano. The satellite transmitter attached to the bird is due to give a further reading in two days' time, so it will be an anxious weekend for researchers and enthusiasts following its progress online. Given that this is the main goose migration period, there is also concern for the welfare of Greylag Geese, Pink-footed Geese, Light-Bellied Brent Geese, Greenland White-fronted Geese and Greenland Barnacle Geese migrating to, or through, Iceland at this time.

On Iceland itself, the volcanic eruption is causing concern for returning waterfowl. A report from WWT's colleague Dr Olafur Einarsson in Reykjavik confirmed that that there is dense ash and total darkness to the southeast of the volcano, near the area dubbed 'Whooper Airport' because it is where most of the birds land after their migration.

Dr Einarsson reports that bird deaths have occurred during previous eruptions of other volcanoes in Iceland, when feeding areas were covered with ash, causing major problems for farmers and birds. Fortunately, at the moment the main area affected, between Vik (in the west) and Kirkjubaejarklaustur (in the east), is primarily an area of sand and gravel, leaving internationally important Whooper Swan staging or breeding sites still suitable for swans.

Y6K is being tracked as part of WWT's ongoing conservation work with Whooper Swans. The project aims to determine the migration routes that swans take, the heights and speeds at which they fly, and the effects of weather conditions on their flight patterns. The work is being carried out in collaboration with COWRIE (Collaborative Offshore Wind Research into the Environment) and DECC (Department of Energy and Climate Change).

COWRIE Ltd is a registered charity to advance and improve understanding and knowledge of the potential environmental impacts of offshore wind farm development in UK waters. It is governed by a Board of Directors drawn from The Crown Estate, the Department of Energy and Climate Change (DECC), and the British Wind Energy Association (BWEA) and is chaired by an independent member. It relies on advice from several specialist working groups, comprising representatives of Government conservation agencies, non-governmental conservation bodies and the wind industry, in addition to the above organisations.