In spring 2007, a partial albino Oystercatcher with a distinctive white head and neck arrived on the Glentress Water in the Moorfoot Hills (Scottish Borders). It summered with other Oystercatchers along the stretch of the burn between Glentress and Whitehope, and was given the pet name 'Whitey'. It returned to the same area in 2008 and 2009, but made no attempt to breed, so may have been a young bird or was unable to find a vacant territory to occupy or an available mate with which to pair. 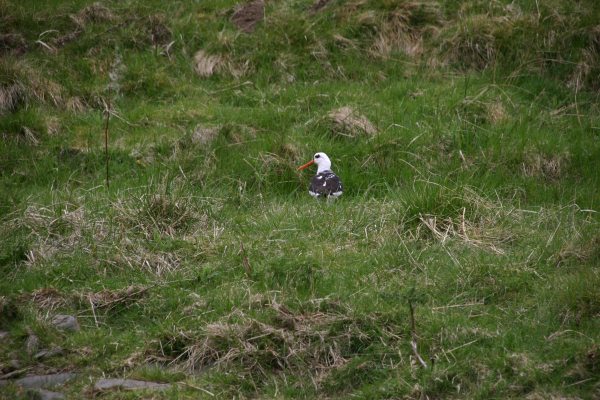 However, this year Whitey managed both, and was sitting on a nest on a gravel embankment beside the burn on 8th May. We didn't check the nest due to the presence of sheep nearby. The nest even survived a weekend of scorching weather, with accompanying picnickers, and on 25th May contained two eggs. Whitey was still incubating on 29th May, but the nest had failed by 2nd June, when it was empty and both Whitey and mate were nearby with no chicks. They were still present on 23rd June.

So, we now know where Whitey breeds, but where does he or she visit on migration and where does he or she spend the winter? This is where we need your help! If you see an Oystercatcher resembling the one in the accompanying image, then please contact Mark Grantham at BirdGuides.