A graceful — feathered — Mr Bond should soon be skyfalling into the UK to help scientists uncover more about its long migration route. The Bewick's Swan, coded 007T and named Mr Bond, was one of 10 Bewick's fitted with GPS tracking devices by the Wildfowl & Wetlands Trust before the birds' migration from the UK last January. Their return from Arctic Russia, which is expected imminently and comes as the cast is announced for the next Bond film, will reveal the route of the swans' 1,800-mile migration journey over at least six countries.

WWT is keen to learn which course the birds take between the Dutch and East Anglian coasts. That stretch of water includes proposed sites for Round 3 windfarms. Dr Eileen Rees, WWT's Head of UK Waterbird Conservation, said: "Bewick's are in decline and this data will help tell us whether North Sea development poses a threat. We don't yet know the impact of windfarms on the swans but information we collect on their flight paths between Norfolk and the Netherlands could help determine the safest sites for them. Between 5,000 and 7,000 Bewick's cross that stretch of water twice each year so safeguarding their passage as much as we can is paramount." 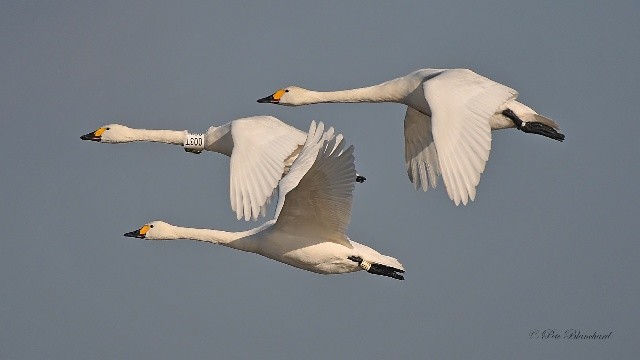 A total of 10 Bewick's Swans were fitted with GPS units at WWT reserves at Slimbridge (Gloucestershire) and Welney (Norfolk). One device (010T) has fallen from the neck collar of a bird seen in Latvia. 007T has reached the Netherlands and is ahead of the remainder. The bird is expected to cross the North Sea when northeasterly winds prevail. If 007T and other birds stay in the Netherlands, WWT scientists will retrieve data from the solar-powered devices there.

Julia Newth, Species Monitoring Assistant, said: "We're hoping not to have to make a mad dash to the Netherlands to download the data but if it gets to January and looks like some of the birds aren't coming to Britain, we'll have to go over there and find them."

The full codes on the white collars range from 001T to 010T; WWT is keen for wildlife watchers to look out for the birds. Sightings should be emailed to colourmarkedswans@wwt.org.uk.