Illegal persecution continues to deprive the British countryside of its native birds of prey, and the RSPB is challenging leaders in the shooting community to acknowledge this and take action to stop the killing.

The RSPB's report Birdcrime 2013 was published this week, and makes for some dismal reading. It reveals 164 reports of shooting and destruction of birds of prey including confirmed shooting of two Hen Harriers, two Marsh Harriers, five Peregrines and 28 Common Buzzards. Also reported are 74 incidents of wildlife poisoning and pesticide-related offences. Confirmed victims of poisoning include 30 Common Buzzards, 20 Red Kites, a Golden Eagle and a White-tailed Eagle. These figures are believed to represent only a fraction of the illegal persecution in the UK, with many incidents thought to be going undetected and unreported.

The RSPB says it is doing more than ever to help birds of prey, including satellite tracking threatened species, protecting their nests, monitoring and undertaking research, raising awareness among the public, and working with others to stop persecution. However, wildlife crime is still rife, especially in the uplands of England, where illegal persecution associated with grouse moors suppresses the population of several bird of prey species.

Tackling wildlife crime requires a joint approach, the RSPB says, but condemnation from organisations representing the shooting community is not resulting in a widespread reduction in illegal persecution. Attempts to bring about change through self-regulation have proved ineffective and tough decisions are needed to combat these crimes. 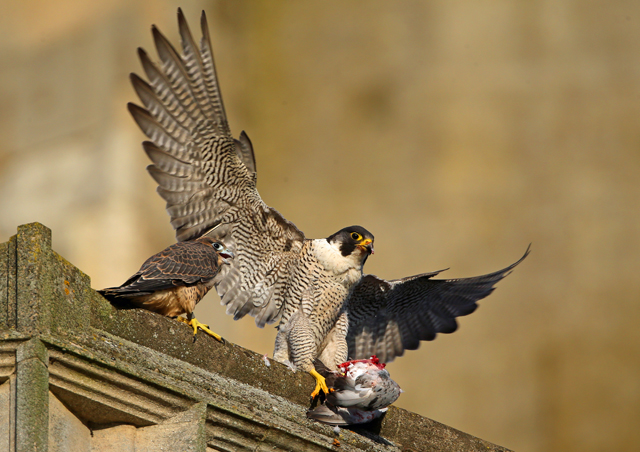 Peregrine is just one of birds of prey to suffer continued illegal persecution in Britain (Photo: Skip)

Martin Harper the RSPB's conservation director, said: "Awareness of illegal persecution is increasing. This year we have seen people taking to the streets to demonstrate against the killing of these birds, and hundreds of people joined rallies in northern England in support of Hen Harrier Day. This shows that public desire for the return of our cherished birds of prey populations is at an all time high and we will continue our efforts to highlight this to the shooting community and DEFRA.

"Illegal persecution has tarnished the beauty of our uplands for decades and continues to do so to this day. The RSPB challenges members of the shooting community to acknowledge that illegal persecution is a problem within the industry and that a change of attitude is needed in order to make a serious and effective effort to finally consign bird of prey persecution to the history books."

The charity states that the grouse shooting industry in the uplands of England must demonstrate it can operate in harmony with birds of prey and help restore the environmental quality of our hills. The RSPB believes it is time to regulate the industry through the introduction of robust licensing system for driven grouse moor shooting.

Furthermore, the RSPB believes that tougher legislation is needed to punish employers who turn a blind eye to staff committing wildlife crimes. It is calling on the government to introduce the provision of vicarious liability, where employers would be legally responsible for the wildlife crimes committed by their employees.

Regional breakdown of incidents reported to the RSPB in 2013 (accurate to 11 August 2014):