As 12th August 2013 approached, I began to get increasingly frustrated by the annual national media attention celebrating the start of the shooting season on the 'Glorious Twelfth'. More specifically, I was frustrated that media outlets seemed simply to regurgitate the press releases sent by various representative organisations and there was no balancing press to highlight the dark side of shooting — its almost complete removal of the Hen Harrier as a breeding species in England. 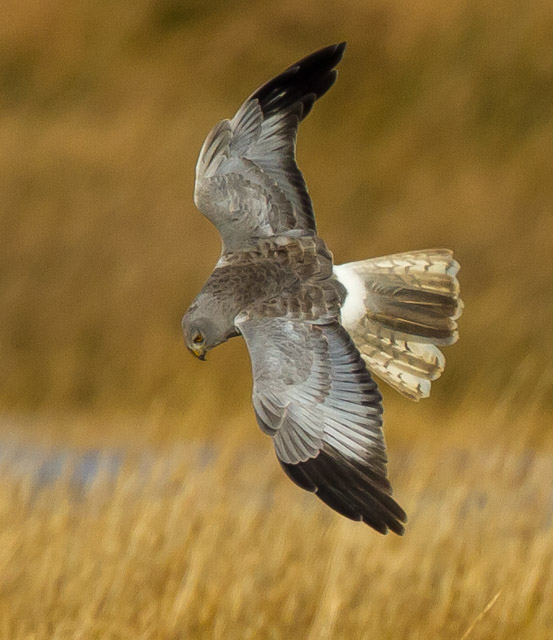 The news on Hen Harriers in 2013 was incredibly disappointing, with breeding attempts in single figures and all failing to get past the egg stage. I took my frustration to my blog and to Twitter, calling on birders to 'take back the 12th' and labelling it Hen Harrier Day. As I wasn't the only one feeling the frustration, there was a gentle take-up of the cause leading up to the 12th, and a flurry of tweets and posts on other social media on the day itself.

Later in the year I was approached by Charlie Moores, activist and all-round conservation hero. He had some ideas to fight back against wildlife crime. From many winter night discussions via the internet equivalent of the campfire (Skype), Birders Against Wildlife Crime was born.

This year Hen Harrier Day is bigger, better and attracting a huge amount of attention. It is organised and co-ordinated by a coalition of Birders Against Wildlife Crime, former RSPB Conservation Director and leading activist Mark Avery, broadcaster and conservationist Chris Packham, the country's leading wildlife charity the RSPB, and the North West Raptor Protection Group.

The teams behind Hen Harrier Day have negotiated with local councils and park managers to allow peaceful, legal gatherings on Sunday August 10th at the following three sites:

Organised by Birders Against Wildlife Crime.

Our plan is to use the South Tyne Trail at Lambley just south-west of Haltwhistle. With a car park readily available at Coanwood, join us by walking along the former mineral railway line. The focus in Northumberland will be the 'selfie trail' we're aiming to create, and group photos. We will be on site from 09:00–16:00 and I will 'meet and greet' at the viaduct. Lambley Viaduct is situated above the South Tyne Valley at NY674583. A small car park is located just north of Coanwood at NY679595. Follow the woodland trail south for 2 km to the viaduct. Follow the minor road south from the A69 at Haltwhistle toward Rowfoot and Coanwood; turn right toward Coanwood at the Lanehead crossroads and the car park is c.200m north of Coanwood on the right.

Mark Avery is organising an event at the Upper Derwent Valley based at the Fairholmes Visitor Centre (Hope Valley SK172893 or S33 0AQ). Renowned conservationist and broadcaster Chris Packham is attending to show his support for the threatened Hen Harrier and his disgust at the level of illegal persecution of this magnificent bird. The Derbyshire event has limited capacity and is full based on the number of people who have registered interest.

The North West Raptor Protection Group will be hosting a Hen Harrier Day event at the heart of England in the Forest of Bowland at Dunsop Bridge. Anyone wishing to take part is asked to please e-mail the co-ordinator on Bowland-HenHarrier-Demo@sky.com as soon as possible, leaving your name, contact details and the number of persons within your group.

We completely understand that not everyone will be able to join us in person on the day — but that's why social media was invented! If you can't make it to one of our events but would like to have your say and speak up for Hen Harriers...all you need is a smartphone or a computer, and maybe a camera and a willingness to take a 'selfie'!