Shooting body lashes out at RSPB with astounding claims

The RSPB has responded to the latest criticism from You Forgot The Birds (YFTB), refuting allegations made by the shooting-industry-funded website, fronted by shooting estate owner Ian Botham.

In a press release headlined 'The RSPB: Specialists In Failure Who Don't Protect Birds', YFTB claimed that DEFRA are about to publish figures that demonstrate "an extraordinary failure by the RSPB to protect England's most endangered birds despite receiving millions of pounds of taxpayer's money for this precise purpose". The body has taken the step of actually blaming the wildlife charity for Hen Harrier nest failure, though it has offered no evidence for this view.

The conservation charity said that the latest comments from YFTB had been made in response to RSPB Chief Executive Mike Clarke's challenges to the shooting industry at the CLA Game Fair last Friday, and trailed the forthcoming public events for Hen Harrier Day being planned in several parts of Britain. 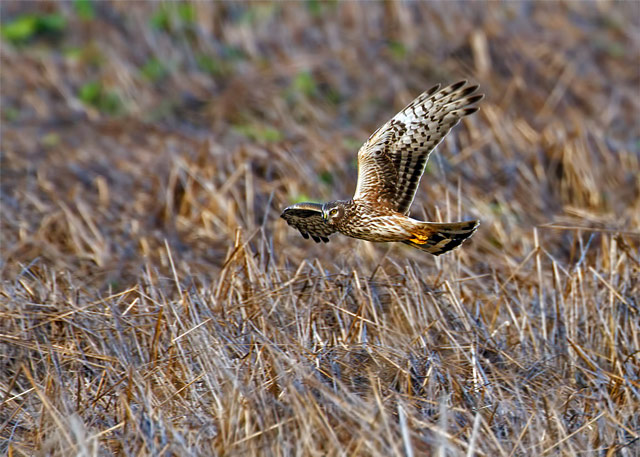 The grouse hunters' body stated that "government figures" show that there were 12 Hen Harrier nests in England this year, six of which failed despite all being protected by the RSPB in Bowland, Lancashire, and Geltsdale, Cumbria. YFTB claims that it is no coincidence that the remaining six were adjacent to grouse moors not overseen by the charity.

At present the RSPB knows of only seven English Hen Harrier nests, five of which were abandoned due to the males mysteriously disappearing, another of which was naturally predated, leaving one last nest in Bowland which fledged a single chick. The remaining five nests claimed by YFTB are as yet unconfirmed, but their rapid issuing of the press release implies unique access to the forthcoming DEFRA report.

YFTB accuse the RSPB of "excessive human interference" at the nest due to tagging and passively allowing predators to destroy Hen Harrier nests, and say that eggs should be moved into incubators when nests look like they are going to be deserted.

Some of the allegations made against RSPB staff and volunteers are extremely serious, and the charity urges anyone with any evidence of nest disturbance, whatever the source, to contact the police. Hen Harrier nests are protected by law and it is an offence to disturb these birds.

The RSPB said that it stands fully behind its staff and volunteers, and reaffirmed that the failure of five of the seven publicly known nests was caused by male Hen Harriers disappearing mysteriously while on hunting flights away from the nest. Such numbers of disappearances are unlikely to occur naturally, according to Hen Harrier biologists.

Jeff Knott, RSPB Head of Nature Policy, commented: "We totally refute [YFTB]'s latest allegations. We do not see how the disappearances of male Hen Harriers while away from the nest can have anything to do with the nest itself, especially when the females remained at the nest patiently waiting for the return of the males. Across the UK in 2014, 49 pairs of Hen Harrier — around eight per cent of the UK total — nested on RSPB reserves."

The Government-published document entitled Hen Harrier Conservation Framework cites that the principal reason for the decline of Hen Harrier is illegal persecution.

Jeff Knott added: "It is encouraging that some Hen Harriers have nested successfully in grouse moor areas this year, but a government report suggests there should be over 300 pairs of Hen Harriers in England, so there's more to be done. Hen Harriers are an iconic bird absent from vast swathes of our uplands. This Sunday a group of people will come together, organised by Birders Against Wildlife Crime, in the Goyt Valley, Derbyshire, and at other locations around the UK, to say we want our Hen Harriers back, as part of Hen Harrier Day. We encourage everyone who cares about these beautiful birds to take part."

As yet, there are no criminal investigations surrounding the Lancashire disappearances, but the police have appealed for any information to trace the whereabouts of the birds, which have not been seen since. It is known, however, that predation by corvids, Stoats or Foxes was not the cause of these nest failures.

Anyone with information about either of the missing birds should contact the police on 101 or call the RSPB's confidential hotline on 0845 466 3636.