A Saker Falcon nest has been found in Bulgaria for the first time in a decade, with two chicks having hatched and successfully fledged. The discovery was made by a team of conservationists from the Bulgarian Society for the Protection of Birds (BSPB) and BirdLife Bulgaria. The finding has fuelled hoped that this globally Endangered raptor is on course to re-establish a breeding population in the eastern European country, following a recent reintroduction scheme. 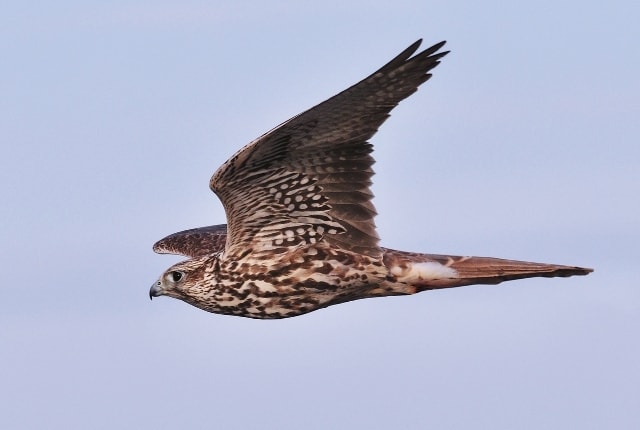 Saker Falcon is an endangered species, with the global population undergoing a rapid decline (Natalino Fenech).

During the past few years, Green Balkans and the Institute of Biodiversity and Ecosystem Research have been leading the Saker Falcon reintroduction project in Bulgaria. In 2015, a number of birds were bred in captivity and released, following a programme to help them adapt to living in the wild. The newly discovered breeding pair was found to have originated from that scheme, with the male identified as ‘5E’ and the female as ‘5P’.

Saker Falcons were formerly abundant across Bulgaria, but they suffered a steep decline during the middle of the 20th century, with only one or two pairs estimated to be breeding by 2000. This decline mirrors a global drop in numbers and stems from a number of causes, including habitat destruction, intensive farming practices (and consequent food scarcity) and a nationwide persecution of birds of prey. However, the recent news is anticipated to be the first step towards re-establishing a sustainable breeding population across Bulgaria.

The BSPB is trying hard to mitigate the various threats the falcons face once they’re released, including nest robberies, illegal killing and electrocution on power lines. Working with local authorities, power companies and farmers means that the installation of artificial nests, cladding of power line poles with safety insulation and agri-environmental measures (such as the protection of hunting grounds) have all been achieved in Bulgaria.