Rediscovered Night Parrot to get conservation action plan in Australia

Bush Heritage Australia is to establish a conservation area for the rediscovered Night Parrot, after images and video of the cryptic species were released to the public.

The Australian conservation organisation is about to establish a nationally significant conservation region in Queensland to protect the only known population of the endangered Night Parrot — a bird that was thought be extinct for more than 100 years. Bush Heritage is working with ornithologists and other scientists and the government to acquire a site comprising 56,000 ha of core habitat to protect the only confirmed population of the species and determine how to improve its chances of survival. 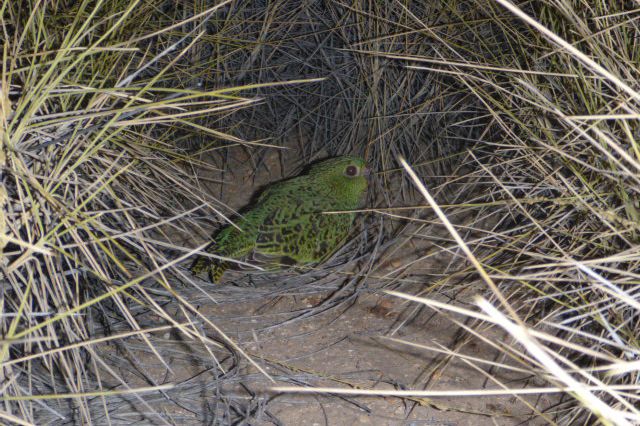 Any residual doubt about the Night Parrot's continued existence has been put to rest by the photographic evidence of the bird in life and in the hand, captured on 4 April this year in south-west Queensland, Australia, now released publicly (Steve Murphy). 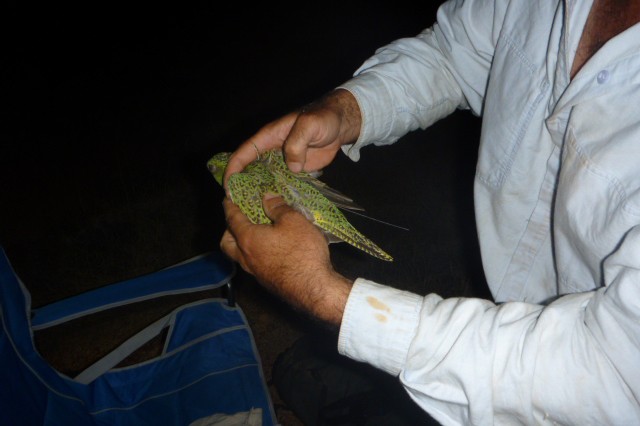 Steve Murphy attaching a radio tag to the live Night Parrot, which enabled biologists to follow the bird as it foraged up to five miles away from its known nest site in the arid Spinifex habitat (Rachel Barr).

Recovery planning is already under way to preserve the pocket of natural habitat in Queensland from threats such as fire and Feral Cats. Night Parrot is also vulnerable to poachers and destructive human disturbance, which is why the exact location of the rediscovered population cannot be revealed at present.

"This is a once-in-a-generation chance to recover this iconic, mysterious parrot, to protect its habitat and to do the research overseen by independent scientists that will bring new knowledge about the Night Parrot's current situation and its future," said Gerard O'Neill, CEO of Bush Heritage Australia.

First described in 1845, Night Parrot was once widespread in arid and semi-arid Australia, but declined sharply after the 1880s with the expansion of pastoralism and the arrival of Feral Cats and Foxes. The green- and gold-feathered largely nocturnal and terrestrial parrot species was recently named one of the 10 priority bird species in the federal government's Threatened Species Strategy. It is still not known exactly how many are left. The elusive psittacid is described by the Smithsonian Institution as one of the planet's most secretive birds. The last living specimen was collected in Western Australia in 1912, after which it vanished for more than 100 years, though two corpses have been found this century, most recently in 2006.

"Bush Heritage is working closely with Steve Murphy, Australia's foremost expert on the Night Parrot, to map its habitat, learn about its life cycle, identify threats and put conservation planning in place to increase the bird's chances of survival," says Rob Murphy, Bush Heritage's Executive Manager, North. "This is a really critical time for this special bird that still could be lost forever if we don't act now," Mr O'Neill added.