Grey-breasted Parakeet, a threatened species endemic to northern Brazil, enjoyed a fantastic year in 2018, in part thanks to the prize-winning project for its protection and recovery, conducted by the Brazilian NGO Aquasis with the Loro Parque Fundación as principal supporter since 2007.

Prior to 2007, the wild Grey-breasted Parakeet population suffered a dramatic decline due to habitat destruction and trapping for trade. Now it is found in only three places in Ceará State, with the main population residing in the Baturité Mountains, south of the city of Fortaleza. This so-called 'sky island' is a remnant of humid Atlantic Rainforest, completely surrounded by unfavourable dry lowland caatinga scrub and agriculture.  Much smaller populations occur in the Quixadá Inselbergs, and another elevated area called Ibaretama. The combined area of these sites totals no more than 830km2.

The selective removal of certain trees and the destruction of nest sites by poachers have resulted in a shortage of suitable nesting cavities for parakeets. In response, Aquasis has made a determined effort to install nestboxes in forested areas on the land of sympathetic owners, being places which provide more deterrence against nest poachers. The nestboxes preferred by the parakeets are wooden with more than one entry and exit hole. The project discovered that Grey-breasted Parakeet is a co-operative breeder, with occupation of a single nest by a group of parakeets instead of just one breeding pair. 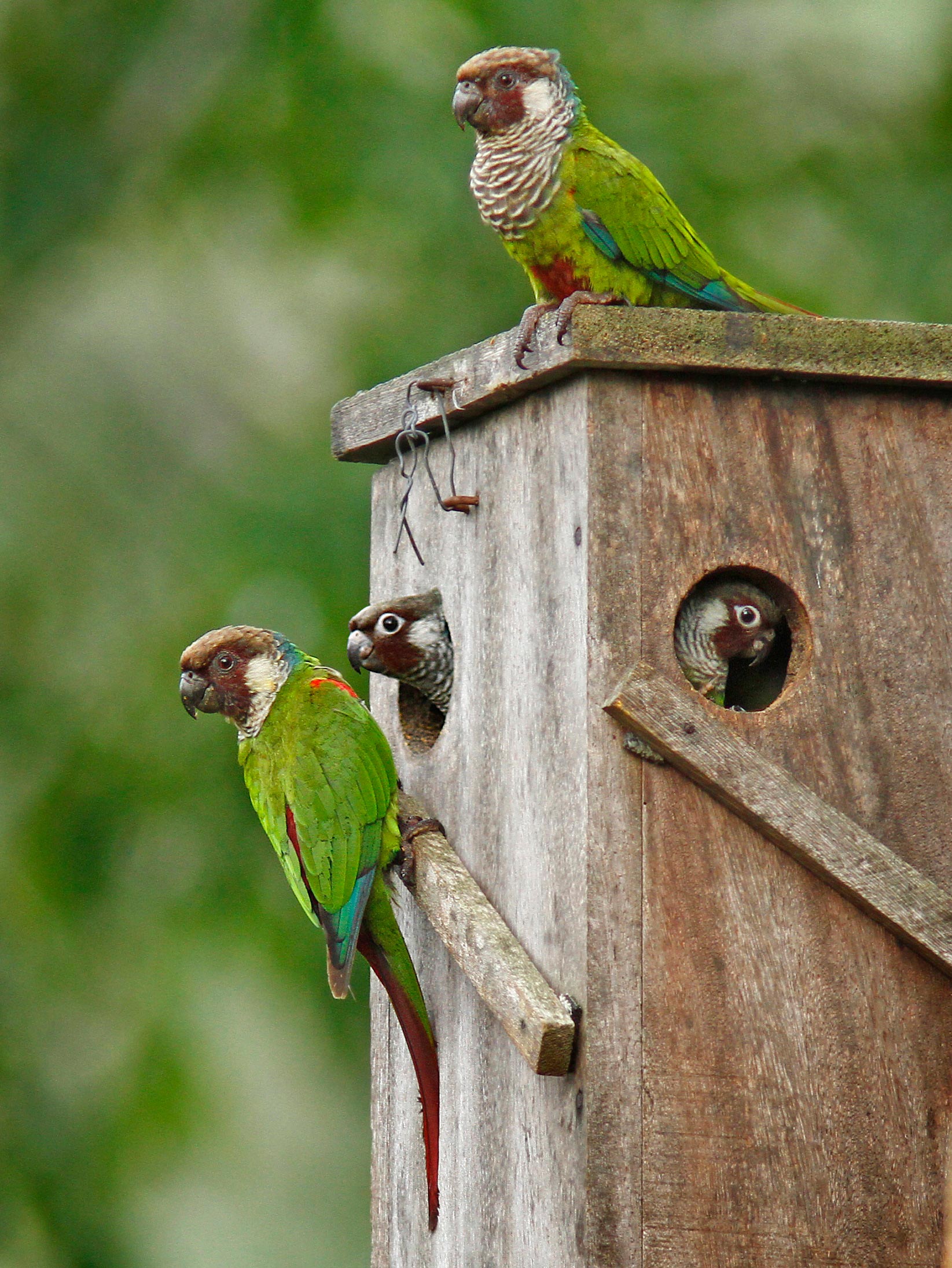 Grey-breasted Parakeets have taken well to the nestboxes installed for them (Aquasis).

The annual increase in breeding success in the nestboxes has been truly remarkable, with a cumulative total of 841 young parakeets fledged between 2010 and 2018. Given that the Aquasis field team places numbered and coloured leg-rings on the chicks, subsequent observations confirm the eventual incorporation of fledglings into the breeding population. The impact of this increased recruitment is reflected in result of the latest census, which estimates the wild population to be 660-870 individuals. For several years previously, the population was thought to approximate only 250 individuals. These positive changes caused by the project have allowed the species to be down-listed in the IUCN Red List of Threatened Species from Critically Endangered to Endangered.

The breeding season in 2018 set a new record for this species, with 62 occupied nestboxes producing a total of 446 eggs, of which 340 hatched and 234 parakeets fledged – a 42 per cent increase from the previous year. The hatching rate for all years combined stands at 74.8 per cent, and the rate of fledging from hatched chicks is 78.2 per cent. The average clutch size stands at 6.9 eggs, and the average number of parakeets fledging per artificial nest has been 4.3. Incremental improvements to features of the nestbox design has helped to deter nest competitors and predators. In 2018 only five natural nests were found, and therefore the work with nestboxes has great importance while the forest of the Baturité Mountains recovers.

Additional contributions to various aspects of the project have been made by Fundação Grupo Boticário, Zoological Society for the Conservation of Species and Populations, The Parrot Society UK, Chester Zoo and the American Bird Conservancy. 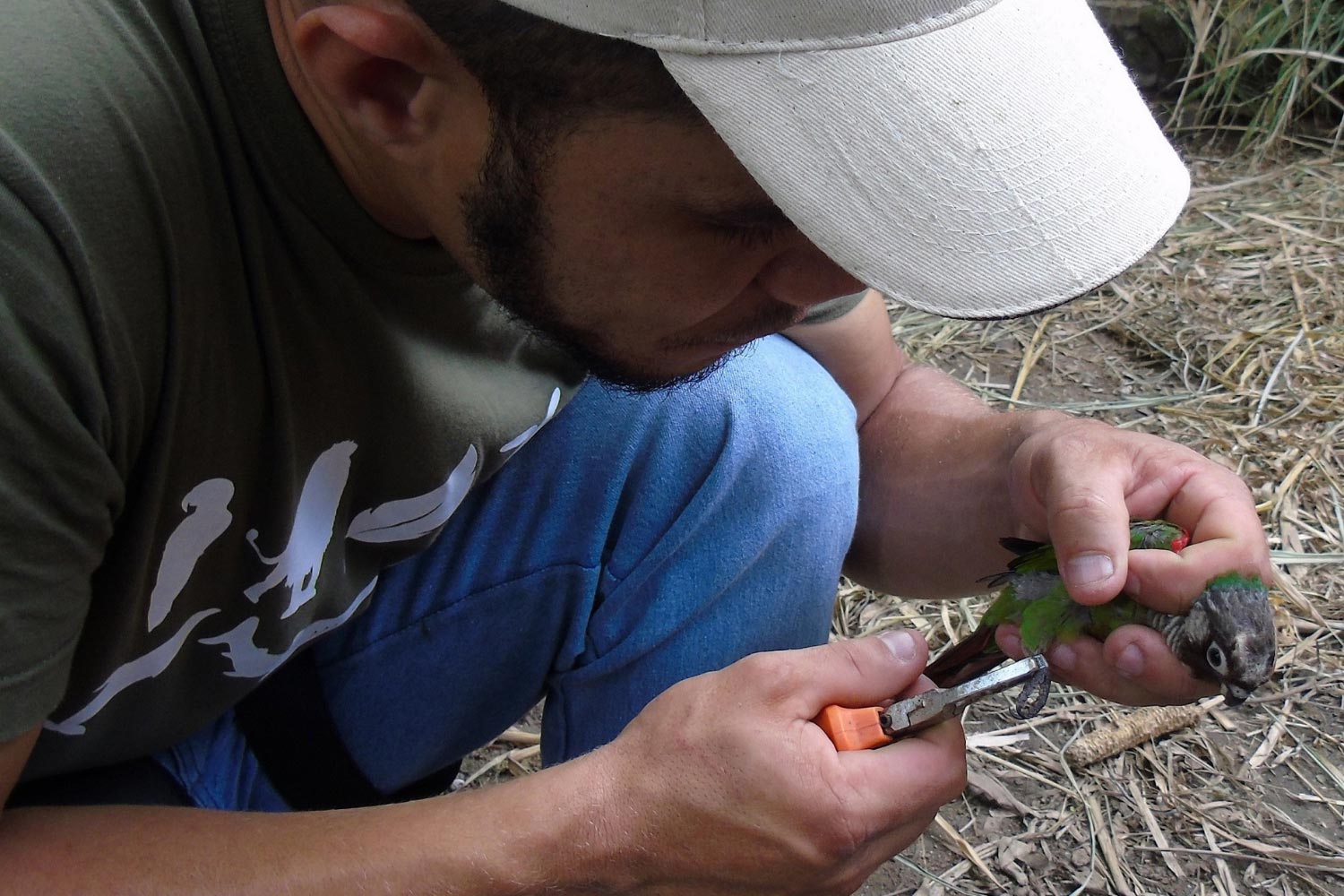 Ringing the fledglings is crucial to ascertaining whether they incorporate themselves into the breeding population (Aquasis).