I am on a plane from Beijing to Zurich, after perhaps the most momentous week of my ornithological life. It was not just having seen 11 species of Phylloscopus warbler in the last few days, nor singing Grey-sided Thrushes in the Xi Shan mountains, but being witness to the discovery of the migration route of the eastern pekinensis subspecies of Common Swifts which breed in Beijing.

A chance encounter with Terry Townshend, founder of Birding Beijing, at a BirdLife International event in London in December 2013 went something like this: "Are the swifts still there at the Summer Palace?", to which Terry replied, "Oh yes, and the Beijing Birdwatching Society rings them every year." A light quickly went on, and we hatched the idea to put geolocators on the swifts in the Kuoro Ting Pavilion.

Lyndon Kearsley, with extensive experience of geolocators on swifts in Europe, jumped at the opportunity to join the team, as did President Fu Jianping, Professor Zhao Xinru and Dr Wu Lan of the China (Beijing) Birdwatching Society to organise the permissions and logistics in China. We had already sourced 11 geolocators; Professor Susanne Åkesson of the Centre for Animal Movement Research (CAnMove) at Lund University in Sweden gave us 20 more, and so we arrived in Beijing in May 2014 with 31 geolocators and a truly international project on our hands, with participants from the UK, Belgium, Sweden and China.

Having had experience at a number of sessions to trap swifts for geolocator studies, I knew that it could take all day to catch just one bird. However, we had not counted on the organisational skills of Professor Zhao who, with his team, efficiently caught and processed enough swifts to deploy all of the geolocators by 07:30 on the first morning! 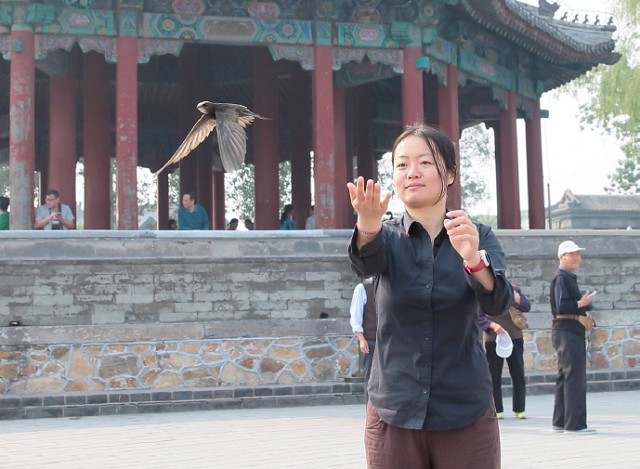 A year duly elapsed, and we arrived back at the Kuoro Ting Pavilion before dawn on 24 May 2015 with 25 more geolocators from Lund University. There to meet us was an expanded team of 25 people from the now renamed China Birdwatching Society.

It was a little while before the first swift with a geolocator was taken out of the nets, then another and another; eventually 13 were retrapped. All birds removed from the nets were divided into three categories: those with a geolocator, other birds ringed in a previous year, and unringed birds. All of those with geolocators had their data downloaded without removing the device (the geolocators have two-year batteries); 25 other birds previously ringed had proved that they are site faithful and so were fitted with the new geolocators, while the unringed birds were ringed. 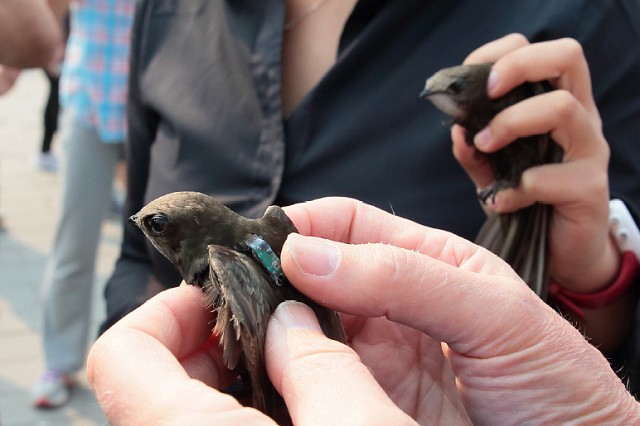 The perfect performance of all the geolocators is testament to Migrate Technology (James Fox), and that all geolocators were perfectly fitted with no negative effects on any of the birds is testament to the skills of the Beijing team, and Lyndon's training abilities. The quality of the data obtained is excellent.

We had speculated that the Beijing swifts would end up in southern Africa in Namibia and the Western Cape, as that is where pekinensis is known to go (from specimens and field observations, including my own). At the start of their journey, there is a huge barrier to the west formed by the Himalayas, the Tibetan Plateau and the Gobi Desert. It was our best guess that they would go south of the Himalayas and west/south-west from there. This is what Amur Falcons do. 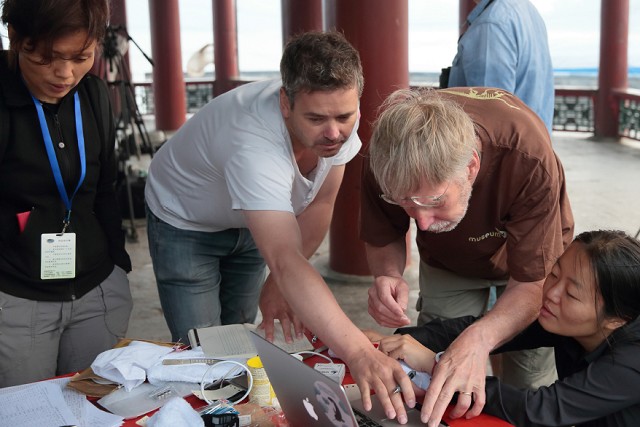 Then came the analysis of the first data set. It was a tense moment. Up came a map on the laptop screen, full of anomalies and artifacts due to the weather and the equinoxes, but the pattern was clear: "It is Namibia!" shouted Lyndon; not only that, but the birds had also gone north of the Himalayas! In fact they went north of the Tien Shan Mountains, having headed out of Beijing on a west-north-west trajectory, across the Gobi Desert and Mongolia. From there they headed for the south Caspian region, on across the middle of the Arabian Peninsula and into the Congo as their first major staging post. Here they would meet up with Common Swifts from Europe.

After visiting Namibia, they retraced their steps back to Beijing on a similar route. The other tracks analysed so far are similar, but with interesting differences (two birds even got to Cape Town!). The swifts seemed to avoid anywhere where birders might see them, which could explain why their movements have been a mystery for so long.

The routes that we found are those of experienced adults. Given that both Pacific Swifts and White-throated Needletails have reached the UK from these longitudes, then a juvenile pekinensis swift from Beijing starting on a west-north-west heading could easily get it wrong and end up in western Europe, including the UK. Are all those late-occurring 'Pallid Swifts' really Pallid Swifts?

Within hours of getting the first result, we issued a press release (thanks to Steve Bale) as well as releasing the news on social media. The story of the media reaction has been as interesting as that of the migration itself. On Facebook, the article has been accessed (that is an active click, not just viewing the trailer) more than 5,000 times, and it's also gone viral on Twitter. Organisations that have retweeted it, among others, include the BTO, Washington Post, New York Times, The Guardian, The Beijinger, The Victoria State Government in Australia, The Paulson Institute, Oriental Bird Club, BirdLife International, BirdGuides, Rare Bird Alert and, the really big one, The Bristol Ornithological Club!

Of some significance is the fact that it has been picked up not only by The Guardian, but also by Xinhua, the largest media agency in China. The reach will be millions of people, probably tens of millions. A positive story about birds for the general public in China is worth its weight in gold, particularly a story with a clear link between China and Africa.

There may now be some 50 swifts with geolocators at the Summer Palace in Beijing, most of which will make another round trip to Africa and back. We will also be back next year to fill in more detail about what this fabulous bird gets up to on its travels. 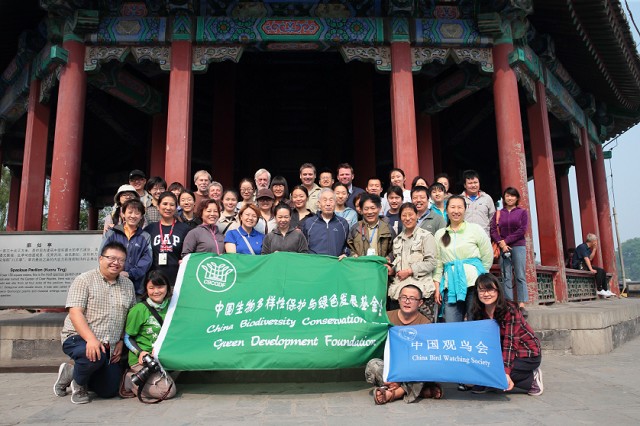