As a thank you for raising more than £100,000 in support of Hen Harriers, the RSPB Hen Harrier LIFE project team is giving Lush customers across the UK the opportunity to name one of the recently satellite-tagged Hen Harrier chicks.

The #NameAndSave competition went live on Lush.co.uk on Hen Harrier Day [6 August 2016] and will run until Thursday 11 August. With over 2,000 entries already submitted, the suggested names will then be shortlisted with the winning entry selected and announced by TV presenter and naturalist Chris Packham, on 12 August, or the so-called 'Glorious Twelfth' — the official start of the grouse-shooting season.

Last year Lush launched the limited-edition 'Skydancer — Far From The Madding Guns' bath bomb, from which 100 per cent of proceeds (minus VAT) went towards Hen Harrier conservation. The Sicilian lemon and liquorice scented product raised over £100,000 for the RSPB's Hen Harrier LIFE project. The project's team of experts protect Hen Harrier nests in some of the UK's remotest areas and tag chicks in a bid to discover more about their movements to help prevent the illegal persecution they suffer on some of the moors of northern England and Scotland. 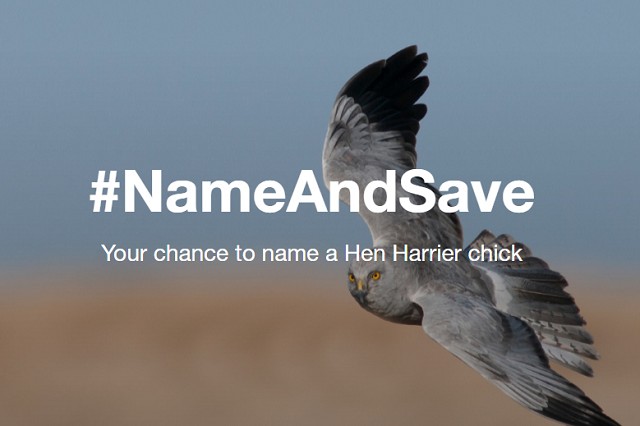 Jeff Knott, Head of Nature Policy at the RSPB, commented: "Satellite tags are a vital tool in helping us better understand and protect Hen Harriers, so the help of Lush customers has been absolutely fantastic. It is appalling that the single biggest reason Hen Harriers remain absent from vast swathes of suitable habitat is illegal killing. Driven grouse shooting must clean up its act and stamp out these crimes if it is to have a future."

Once the winning name has been announced the public will be able to follow the fate of this particular bird, along with 10 others, on the RSPB's Hen Harrier LIFE project website.