Look out for Long-tailed Blues

Long-tailed Blue, a striking butterfly from southern Europe, is appearing in record-breaking numbers across the south of England.

More than 50 adults and hundreds of eggs have been discovered over the last few weeks, which could result in the largest-ever emergence of the butterfly in UK history.

Experts believe that climate change and the resultant rising temperatures are behind the influx, with sightings of the butterfly logged from Cornwall east to Kent, as far north as Suffolk and even into Surrey, where the species hasn't been seen since 1990.

Typically, only a handful of these exotic migrants from the Mediterranean reach the UK each summer, but this is the third time in six years that the butterfly has arrived in vastly increased numbers and 2019 looks set to surpass the previous peaks witnessed in 2013 and 2015. 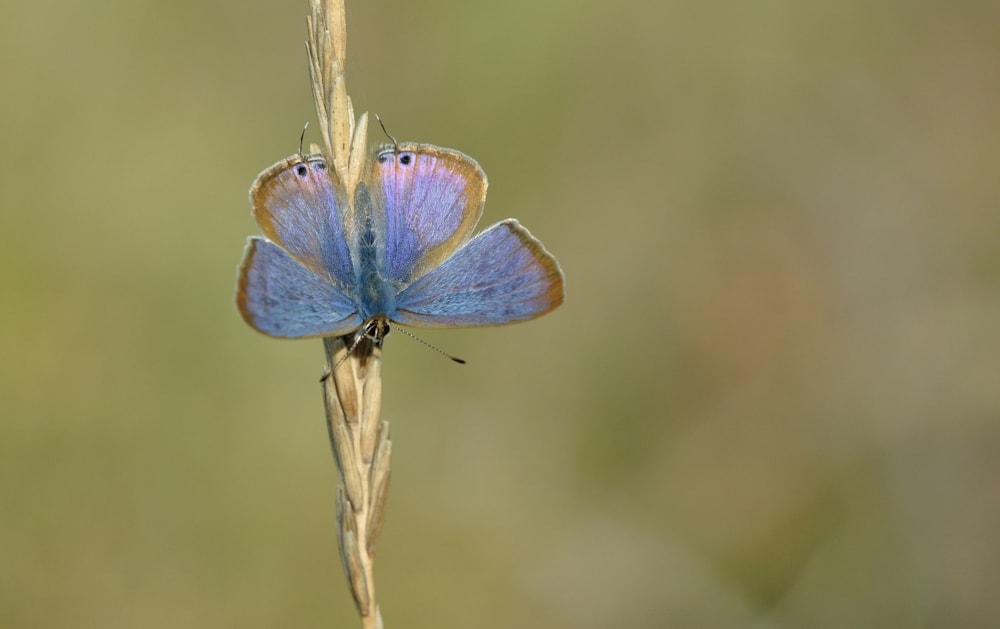 Butterfly Conservation volunteer and Long-tailed Blue expert Neil Hulme commented: "These butterflies have crossed the Channel and are laying eggs in gardens, allotments and anywhere you can find Broad-leaved Everlasting Pea and similar plants, which the caterpillar likes to feed on.

"We've never recorded this many migrant adults before – it's completely unprecedented. In only a few days, I've found more than 100 eggs in Sussex alone and the butterfly has been seen in Cornwall, Somerset, Devon, Dorset, Hampshire, Kent and Suffolk. We've even had a sighting in Glamorgan in South Wales.

"What's really exciting is that Long-tailed Blue has gone further inland than it did in 2013 and 2015, with at least three confirmed sightings in Surrey, where the butterfly hasn't been seen for 30 years.

"The adults will keep laying eggs and in September and October we'll see the first British-born offspring emerging. I strongly believe this will take the total number seen this year to well over a hundred, breaking all previous records for this butterfly in the UK." 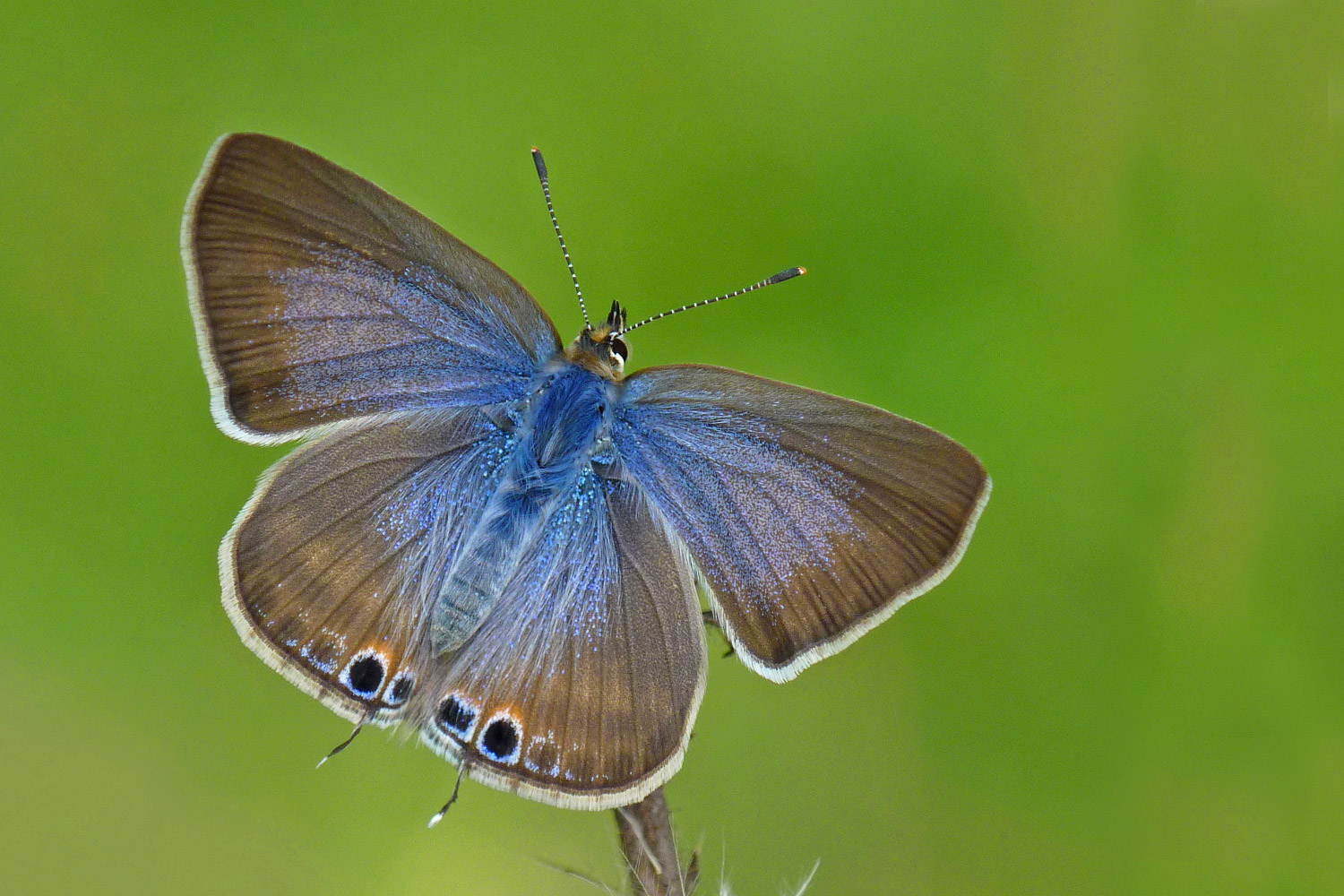 Female Long-tailed Blue has more restricted blue on the upperside when compared to males, with extensive brown fringes to both the forewing and hindwing (Neil Hulme/Butterfly Conservation).

Long-tailed Blue was previously considered a very rare visitor to the UK, despite being abundant across southern Europe, Africa, Asia and Australia. It was seen for the first time in Britain in 1859, but over the next 80 years only 30 adults were recorded here. Significant influxes occurred in 1945, 1990 and most recently in 2015, but none of these equalled the invasion of 2013, when 109 sightings were recorded between July and October.

The butterfly gets its name from the wispy 'tails' on the trailing edge of each of its hindwings, which flutter in the breeze. Adjacent eye spots fool birds into thinking this is the head of the butterfly, allowing it to escape any attacks unharmed.

The male is a striking violet-blue colour, while the female is a mix of duller blue and brown. The underside of both sexes is a sandy brown colour crossed by numerous white, wavy lines.

With so many Long-tailed Blues along the south coast, enthusiasts are being encouraged to search patches of the non-native Broad-leaved Everlasting Pea, the caterpillars' foodplant, for eggs. Although tiny in size, their white coloration means that they stand out against the greens and purples of the pea plants and are readily discovered on the stalks, buds and flowers if subjected to close examination. 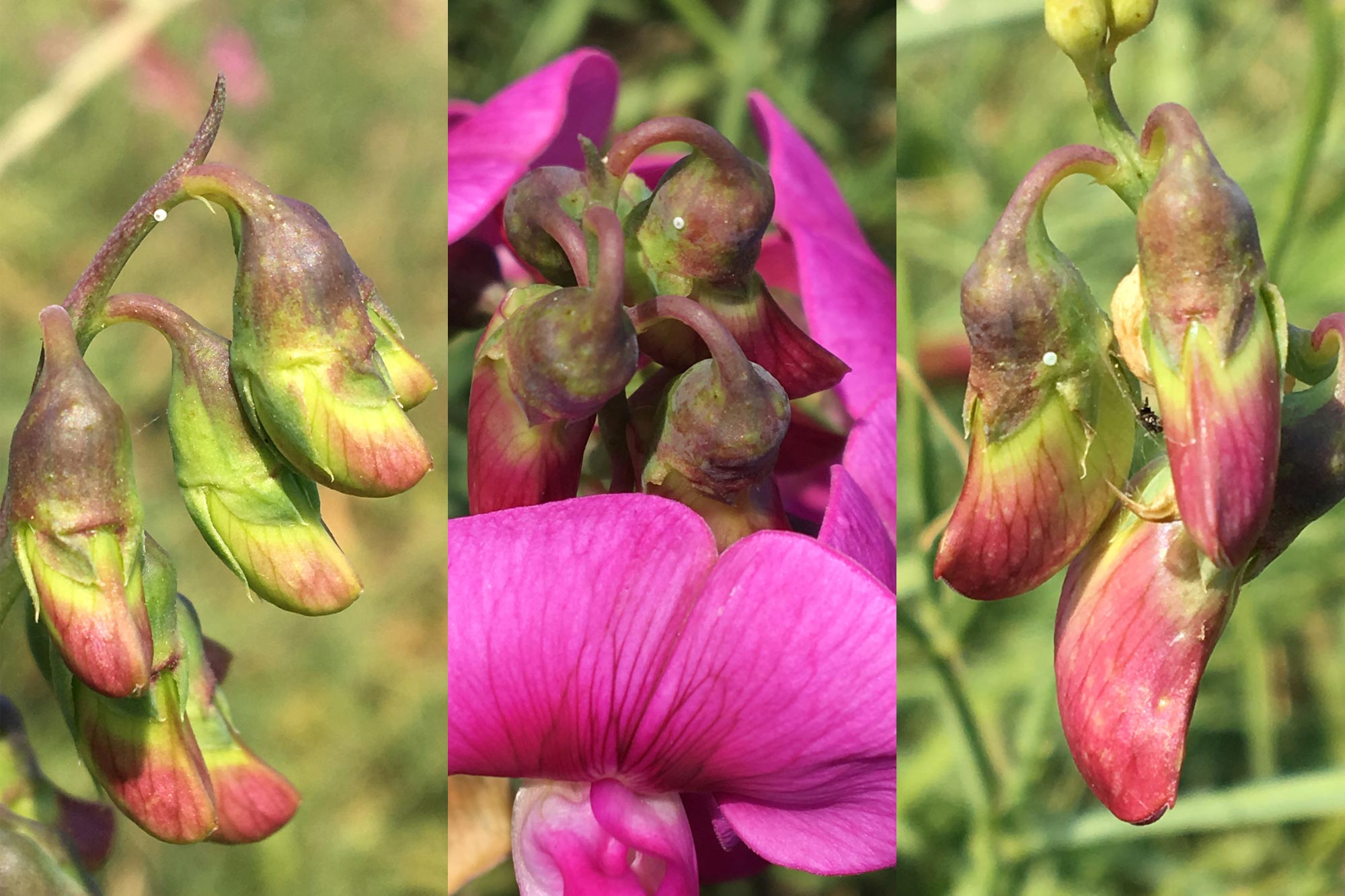 The tiny white eggs of Long-tailed Blue butterflies are well worth searching for on Broad-leaved Everlasting Pea plants along the south coast at present. Three examples are shown here (Josh Jones).

Mr Hulme added: "This is one of the world's more successful species of butterfly. It may be small, but it's a very powerful flyer, capable of crossing mountain ranges and seas.

"In hot weather it can go through its entire life cycle in just over a month, which is half the period taken by many species. The caterpillar grows up inside the flowers and pods of peas and similar plants, hidden away from predators. It has the full toolkit for world domination." 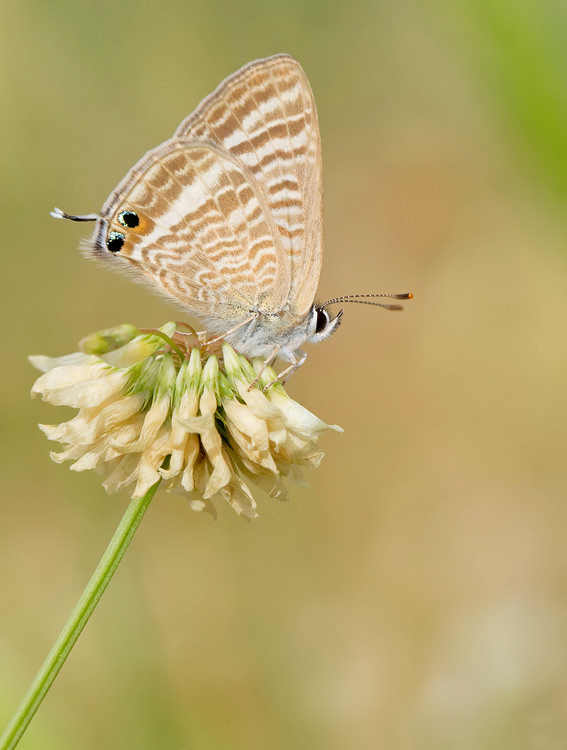 The stripy underwings of Long-tailed Blue makes it very distinctive from other naturally occurring blue species in Britain (Paul Cools).

Dr Dan Hoare from Butterfly Conservation said: "With unprecedented numbers of Long-tailed Blues and UK sightings of other rarities, like Bedstraw Hawkmoth and Queen of Spain Fritillary, 2019 is certainly turning out to be an exciting year for immigrant species.

"Long-tailed Blue is still a way off from becoming a resident butterfly in this country, as it can't survive our winter. However, what we're seeing this year confirms the butterfly is extending its geographical range northwards in response to climate change – so we can look forward to seeing this beautiful little butterfly more regularly."

Observers are asked to report any Long-tailed Blue sightings to info@butterfly-conservation.org or through the free iRecord Butterflies app.