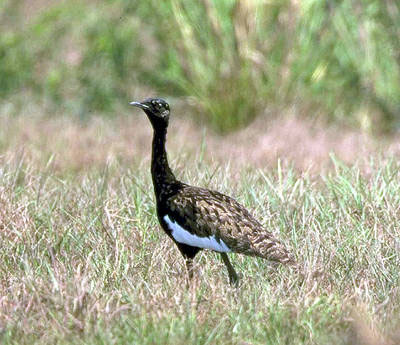 The Bengal Florican — the rarest of the globe's 27 bustards — is amongst 189 critically endangered birds being targeted by an initiative to find companies and individuals who will highlight each species' plight and contribute funds towards helping them.

There are fewer than 1,000 Bengal Floricans left in Cambodia, India and Nepal, and conservationists have given the bird just five years if the destruction of its grassland habitat continues.

Three other birds — the Belding's Yellowthroat of Mexico, the Djibouti Francolin and Brazil's Restinga Antwren are also being championed at Birdfair, when the RSPB partner, BirdLife International, will launch its initiative, Preventing Extinctions: Saving the World's Critically Endangered Birds.

Ian Barber, the RSPB's South Asia officer, said: "The Bengal lorican is now hanging on in only three countries and is under huge pressure in all three.

"It is only eight years since the bird's rediscovery in Cambodia and already it is facing oblivion. Even in protected sites in Nepal, land is being taken for agriculture leaving no room for the bird. This initiative may be its last hope."

Fewer than 700 Bengal Floricans — which resemble small ostriches — remain on the floodplain of the Tonle Sap Lake, the largest freshwater lake in South East Asia. Numbers there have fallen from 3,000 in ten years. The Nepalese population, which is legally protected, has dropped by more than 50 per cent in 25 years to fewer than 60 birds. In India, only about 250 are left.

The Birdfair is targeting the Cambodian population and money raised will boost a government-backed scheme encouraging farmers on designated sites to resume traditional grazing and scrub clearance on grasslands instead of switching to dry-season rice growing.

Government official, Seng Kim Hout, has seen how crucial the project is to the bird. "These grasslands are disappearing before our eye," he said. "On revisiting many of our survey sites, we found the landscape unrecognisable from previous years, squeezing the floricans into a shrinking landscape in which they cannot survive.

"I even once saw a male florican displaying on a dam wall because all the grassland had been converted to irrigated rice."

Right initiatives in the right places

Bengal Floricans were rediscovered in Cambodia in 1999 and are named after the region of Bengal where the species was first identified. They depend on traditionally managed grasslands for food and for males to perform their elaborate parachuting courtship display.

Martin Davies, the RSPB's Birdfair Co-organiser, said: "It is still possible to save the florican and all of the other critically endangered birds. What we need is more of the right initiatives in the right places. We are not talking about ridiculous amounts of money to make this happen and coming to support and enjoy the Birdfair this weekend is the most straightforward thing anyone can do to help.'

Birdfair starts on 17th August at Rutland Water and is co-organised by the RSPB and the Leicestershire and Rutland Wildlife Trust.