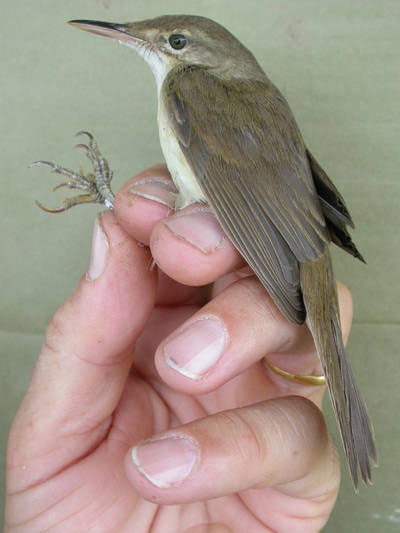 Ornithologists across the world are celebrating with the news that a wetland bird that has eluded scientists ever since its discovery in India in 1867 has been refound. Twice.

The Large-billed Reed-warbler is the world's least-known bird. A single bird was collected in the Sutlej Valley, Himachal Pradesh, India, in 1867, but many had questioned whether it was indeed represented a true species and wasn't just an aberrant individual of a common species.

But on 27th March 2006, ornithologist Philip Round, Assistant Professor in the Department of Biology, Mahidol University, was bird ringing at a wastewater treatment centre (the royally initiated Laem Phak Bia Environmental Research and Development Project) near Bangkok, Thailand.

"Although reed-warblers are generally drab and look very similar, one of the birds I caught that morning struck me as very odd. Something about it didn't quite add up; it had a long beak and short wings," said Round. "Then, it dawned on me-I was probably holding a Large-billed Reed-warbler. I was dumbstruck, it felt as if I was holding a living Dodo."

"I knew it was essential to get cast-iron proof of its identity. I took many photographs, and carefully collected two feathers for DNA analysis, so as not to harm the bird."

Round contacted Professor Staffan Bensch, from Lund University, Sweden, who had previously examined the Indian specimen and confirmed it did represent a valid species. He examined photographs and DNA of the Thai bird and confirmed the two were the same species.

This rediscovery of the Large-billed Reed-warbler on the shores of Inner Gulf of Thailand (a BirdLife Important Bird Area, IBA) illustrates the importance of wetland habitats and the remarkable biodiversity they are home to," said Ms Kritsana Kaewplang, BCST Director. "It also demonstrates the contribution of routine monitoring and ringing of migratory birds at even well-known sites."

"This remarkable discovery gives Indian ornithologists an added incentive to continue our search for the Large-billed Reed-warbler in India," said Dr Asad Rahmani, Director of the Bombay Natural History Society. "Like the discovery of Bugun Liocichla last year in Arunachal Pradesh, it shows us just how much we still have to learn about our remarkable avifauna."

BirdLife International's Dr Stuart Butchart, commented: "Almost nothing is known about this mysterious bird. The Indian specimen has short, round wings and we speculated it is resident or short-distance migrant, so its appearance in Thailand is very surprising. A priority now is to find out where the Large-billed Reed-warbler's main population lives, whether it is threatened, and if so, how these threats can be addressed."

But, in a further twist to this remarkable tale, six months after the rediscovery, another Large-billed Reed-warbler specimen was discovered in the collection of the Natural History Museum at Tring, in a drawer of Blyth's Reed-warblers (Acrocephalus dumetorum) collected in India during the 19th Century. Once again, Professor Staffan Bensch confirmed the identification using DNA.

"Finding one Large-billed Reed-warbler after 139 years was remarkable; finding a second right under ornithologists' noses for that length of time is nothing short of a miracle," said Butchart.

The second specimen is from a different part of India and is bound to fuel debate as to the whereabouts of more Large-billed Reed-warblers.

"Now people are aware Large-billed Reed-warblers are out there, we can expect someone to discover the breeding grounds before long. Myanmar or Bangladesh are strong possibilities, but this species has proved so elusive that it could produce yet another surprise," said Butchart.