Conservationists trying to prevent the extinction of the Northern Bald Ibis — one of the world's rarest birds — are distraught that one of the last remaining wild birds in the Middle East has been shot by a hunter in Saudi Arabia, bringing the known wild Middle Eastern population of this Critically Endangered species to just four individuals. 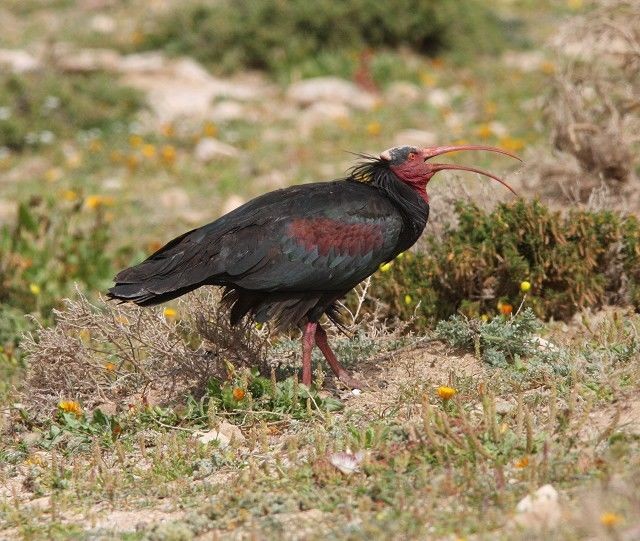 Formerly, the range of this bird extended across parts of southern and central Europe, North Africa and the Middle East. It even features in the hieroglyphs of Ancient Egypt. Following a huge population and range decline, the bulk of the wild population of 210 birds now occurs in Morocco, but a tiny population was rediscovered in 2002 in Syria.

A satellite-tracking project led by BirdLife International and the IUCN, in collaboration with the Desert Commission of the Syrian Government, established that the Syrian adults migrate to the Ethiopian highlands each winter, but the wintering area of younger birds remains a mystery. This migration across the deserts of the Middle East to northeast Africa puts these birds under threat from the region's many hunters.

Researchers from the RSPB, BirdLife International and IUCN, trying to find out more about the movements of the young birds, fitted two birds with satellite tags, and it is one of these birds — a female, known as Julia — which was shot.

Eng. Ali Hamoud, of the Syrian Desert Commission, said: "We were excited that tagging a sub-adult bald ibis may have helped us to solve the mystery of where young ibises spend the winter, but now we may never know. The shooting of a young bird from such a tiny population is devastating news and it shows that hunting is a major threat to this species."

Dr Jeremy Lindsell is the RSPB scientist in charge of the Bald Ibis satellite-tracking project. He said: "Recovery of the population from this frighteningly low level is going to be exceedingly difficult, but everyone involved in the project believes we must do everything we can to provide hope for this culturally important icon of the Middle East. The tiny Syrian population has been breeding very well since its discovery, although it has suffered two poor years. The low rate of return of young birds to the colony shows that they are being lost somewhere on migration. We are starting to discover what the problem might be."

Three birds from a semi-captive population in Turkey were released last year to see if they would migrate. They flew south as far as Jordan, but subsequently were found dead. Initially, it was feared they had been poisoned, but later it was realised that the birds had been electrocuted, emphasising that other threats can have a devastating impact on the future of the Bald Ibis in the Middle East. More satellite-tagged birds released from Turkey this year flew south as far as Saudi Arabia but they too disappeared not much more than 100 km from where the Syrian bird was shot. Although their fate has not been established, researchers believe these birds too may have succumbed to hunters, or suffered some other fate. 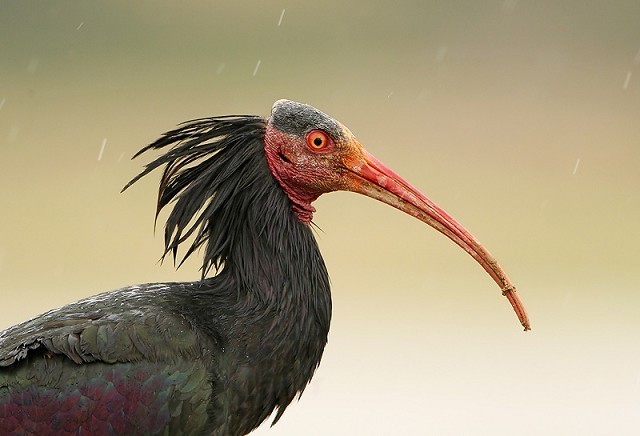 The hunting of Bald Ibis is not allowed in Saudi Arabia. The bird advisor for the NCWCD (National Commission for Wildlife Conservation and Development) and Global BirdLife council member Dr. Mohammed Shobrak, said: "Upon hearing the news of Northern Bald Ibises in Saudi Arabia, NCWCD immediately reacted and dispatched a team to search for the birds. Local people reported to the commission that a Bald Ibis had been shot illegally by hunters. The NCWCD regrets this incident in the country and stands ready to support all concerned institutions — governments and NGOs to conserve wildlife at national, regional and global levels in accordance with instructions of the Custodian of the Two Holy Mosques, HRH the Crown Prince and the Second Premier."

On migration, the remaining Bald Ibises nesting in Syria pass through Jordan, Saudi Arabia, Yemen, Djibouti, Eritrea, finally wintering in Ethiopia. Sharif Jbour, of Birdlife Middle East, said "Now that the threats to this species are becoming clear we will be doing all we can to address them. It is essential for the future of this population that they have safe passage through the region during their migration. With so many countries involved this is a great challenge but we already have high level support in many of these countries, so we are hopeful of change."