A huge stash of hornbill 'ivory' was among the 800 animal parts seized in a raid on Borneo on 10 October, officials in Malaysia have revealed.

Borneo's vast rainforests are home to near-unparalleled levels of biodiversity, but its rare and spectacular creatures are routinely targeted by poachers who sell their parts to collectors and for use in traditional medicine or valuable artefacts, particularly in China.

Officials uncovered the massive haul on Saturday in a raid on a house in Kapit in Malaysia's Sarawak state, and a 56-year-old man was arrested, senior forestry official Zolkipli Mohamad Aton told the AFP news agency.

The findings included 148 Helmeted Hornbill casques – a solid, decorative growth on the upper mandible of the bill that is made of keratin (in other hornbills it is a softer and more lightweight tissue). These hefty casques are in growing demand in China, where they are carved into luxury ornaments, statues and jewellery.

This demand has led to a rapid increase in poaching of Helmeted Hornbill across its native range in South-East Asia, where it is found in Indonesia (Sumatra and Kalimantan), Malaysia, Brunei, southern Myanmar and southern Thailand (it used to occur in Singapore, but is now extinct there). As such, the population of this naturally scarce species has plummeted and it is now classified as Critically Endangered, with a targeted international action plan drawn up in 2018 to save it from extinction.

A spokesperson said that the suspect could be a supplier of animal parts to syndicates exporting them to markets such as China, Hong Kong and Vietnam, and was facing jail for breaking wildlife protection laws. 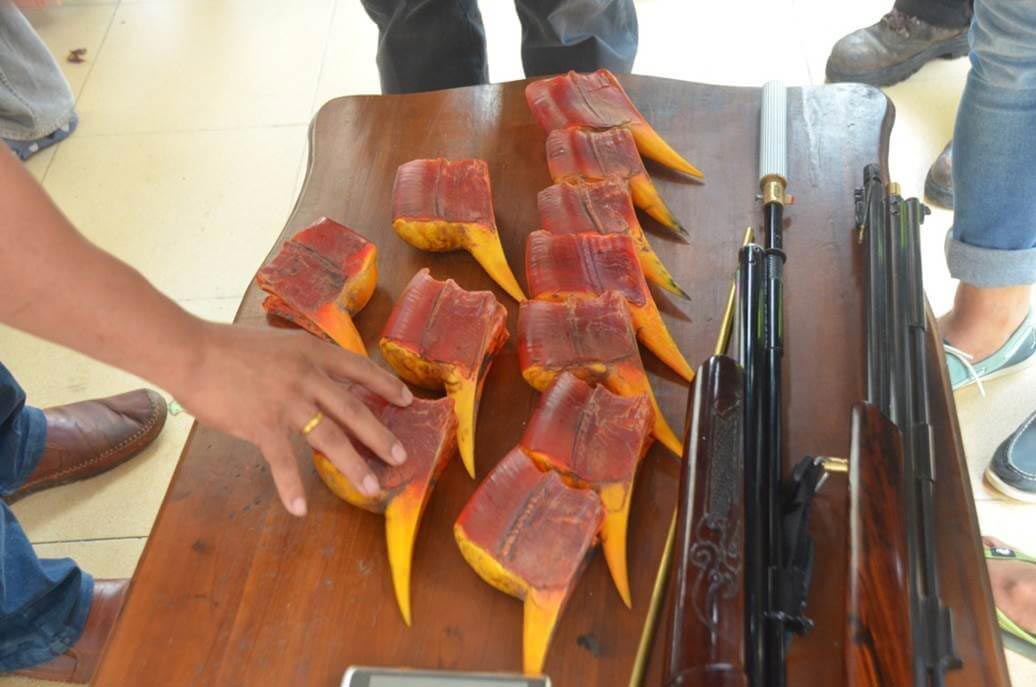 A batch of Helmeted Hornbill casques seized in Indonesia (Dewantara/WCS)

Elizabeth John, a spokeswoman for the wildlife trade watchdog Traffic, said the hornbill ivory seizure was "very significant" given the rise in poaching. "Seizure data shows China to be a major destination for hornbill ivory and it is seen as a substitute for elephant ivory," she told AFP.

Malaysia's proximity to major markets and its well-developed port network have made the country a regional hub for wildlife smuggling.