The British Ornithologists’ Union Records Committee (BOURC) has admitted Hooded Merganser Lophodytes cucullatus to Category A of the British List following a review of the occurrence of a female or immature at Oban Trumisgarry, North Uist, Outer Hebrides, from 23rd October until 1st November 2000 (sight record, photographed).

Hooded Merganser has an extensive breeding range throughout wooded areas of the east and Pacific Northwest of North America. Its primary winter range includes the southeastern United States for eastern birds and the Pacific coast north of California for western birds. In addition to records from the Azores, there are three accepted records (of four individuals) from Ireland, and there have been records of apparent vagrants from Iceland and the Canary Islands. 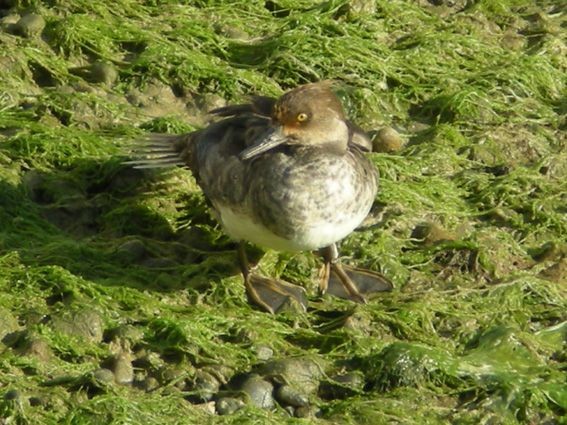 This species was formerly on Category B of the British List (on the basis of a record from the Menai Straits, Gwynedd, 1830-31), but was moved to Category E following a review in 1999. In 2001, following assessment of the 2000 Outer Hebrides record, Hooded Merganser was placed in Category D (BOURC 28th Report; Ibis 144: 181-184). There was considerable support for the record, but also caution about reinstating it on the British List given the very large numbers in captivity and the relatively large number of previous and contemporary records of escapes. The difficulties in assessing records of this species are illustrated by the fact that escaped Hooded Mergansers were recorded in both Sussex and Anglesey during October 2000.

Since then, an emerging pattern of vagrancy to the Western Palearctic (especially the Azores, where there have been four records since 2001) combined with some evidence of an increase in numbers counted during Christmas Bird Counts in the United States (www.audubon.org/bird/cbc), has strengthened the confidence of the committee that the Outer Hebrides record involved a wild vagrant. The committee remains of the opinion, however, that most records in Britain and Europe involve birds of captive origin.

Hooded Merganser should be placed after Smew Mergellus albellus on the British List as follows:

Bob McGowan, Chairman of BOURC, commented "Hooded Merganser has had a particularly troubled route through various categories of the British List, but this only emphasises the complexities in assessing genuine vagrancy in waterfowl, particularly with species which exhibit moderate to high escape potential. For example, the National Waterfowl Census revealed that 206 Hooded Mergansers were hatched in Britain in 2001 so caution was justifiable. Since 2000, documented occurrences in the Azores, the Canaries and Iceland, as well as from Newbiggin in 2002 (British Birds 96: 606) and Shetland in 2006 (British Birds 100: 752), have demonstrated a tendency of increasing natural vagrancy, probably a consequence of the species' better fortune in North America. Largely as a result of this evidence, BOURC voted unanimously to admit Hooded Merganser to Category A of the British List."