Hen Harriers bred in Northumberland this summer for the fifth year in a row, making it the most consistent nesting place in England for the species.

The Northumberland Hen Harrier Protection Partnership has announced that nine young have fledged from three nests on Forestry England and nearby private land in the county in 2019.

Early on in the season, the partnership was braced for a record year, perhaps passing last year's total of 11 fledged young from three nests. Six nests were originally relocated, but torrential rain came when the chicks were small, causing young to perish at two nests. A third clutch did not hatch and natural predation by a fox took three young from a nest, leaving nine surviving juveniles to fledge. 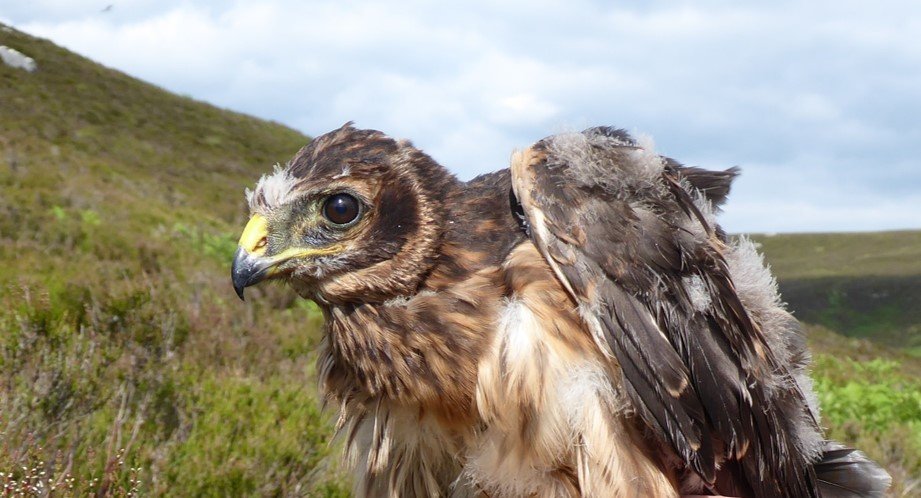 Tags from previous fledglings have revealed that two birds have died due to natural causes, but three others – named Finn, Athena, and Vulcan – all disappeared in suspicious circumstances in March 2018, August 2018 and January 2019 respectively.

In January 2017, Northumberland-born Carroll was found dead with two shotgun pellets lodged in her body. Better news did, however, come this year as a tagged bird called Sophia raised a brood of her own in one of the Northumberland nests.

Tom Dearnley Forestry England Ecologist said: "We are delighted that yet again the public forest estate has provided a suitable habitat for these fantastic birds. We are glad our partnership work continues to contribute towards giving future generations the chance to see these birds in England."

Dr Cathleen Thomas, Senior Project Manager at the RSPB, commented: "It's fantastic to see that Northumberland is the English stronghold for one of our rarest birds – as a partnership we can be really proud of that. We're doing everything we can to help protect Hen Harriers here, but past experience makes us anxious about their futures once they leave their nests."

Rob Cooke from Natural England added: "We are very pleased that once again work in Northumberland has resulted in good numbers of nesting Hen Harriers. The monitoring, tagging and fledging of these birds has been a real partnership success, and is a model for what needs to be achieved elsewhere."