Cirl Bunting has made a magnificent comeback from the brink after the British population climbed to over 1,000 pairs this year, says the RSPB.

The dramatic rise in the population of the sparrow-sized farmland seed-eating bird to 1,078 pairs comes at a time when many other farmland birds continue to struggle. The jump in numbers follows a 25-year project between the RSPB and local farmers in the South-West to help manage their land in a Cirl Bunting-friendly way, providing year-round food supplies and habitat for the threatened species.

Under the Cirl Bunting Recovery Programme, led by the RSPB, advisers worked with farmers to help them take up Countryside Stewardship Schemes — a government programme that allowed farmers to earn payments for making nature-friendly choices — to manage their land for Cirl Buntings. These options include growing spring barley, that after harvest is left as weedy stubble to provide food during the colder months, and planting grassy margins at the edge of their arable fields, which provide insects and spiders to eat in summer.

The initiative has led to an incredible eight-fold increase in the numbers of the species in Britain, from being on the verge of extinction in 1991 to a more stable population of 1,078 pairs in 2016. It is hoped numbers will continue to climb and colonies will spread into other parts of southern England, where they were once common and widespread before suffering huge declines as a result of the loss of food sources and nesting sites. 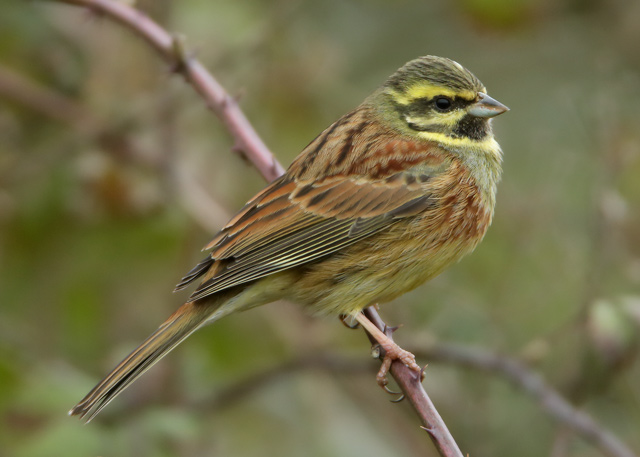 Martin Harper, RSPB Conservation Director, said: "The recovery of this charming little bird is a remarkable conservation success and shows what can be achieved when farmers and conservationists. To go from being on the brink of extinction to over a thousand pairs in just 25 years — bucking the overall downward trend for most farmland birds — highlights how effective this project has been.

"It is down to the care and hard work farmers in Devon and Cornwall have put in on their land using the tailored schemes that has made this remarkable comeback possible. The success is one of the best examples of how conservation groups and farmers can work together to achieve amazing results for wildlife. Without this action, Cirl Bunting would have almost certainly disappeared from our shores altogether."

The majority of the bird's population remains confined to Devon, although the first successful reintroduction programme of a passerine in Europe means that a thriving population can now be found in Cornwall — 65 pairs according to the latest survey. Numbers are expected to continue to grow, and it is hoped that Cirl Bunting will return to more of its former areas in southern Britain.

A wide variety of farmland wildlife is likely to have benefited from the effects of the project. Other species such as Linnet, Skylark and Yellowhammer are all known to benefit from a boost in winter stubble food sources, with species like Brown Hare, Greater and Lesser Horseshoe Bat and rare arable plants being seen more often these days.

Chris Sutton-Scott-Tucker, owner of Great Combe Farm in Devon, said: "Before the RSPB recovery project started in the early 1990s I hadn't heard or seen Cirl Buntings before. But the project made it easy to use a Countryside Stewardship Scheme to manage my land to help wildlife without seeing a drop in my farming income. Since then I have enjoyed seeing all different types of wildlife making a home on the farm and I look forward to continuing with the RSPB in the future."