Formerly one of Eurasia's most abundant bird species, Yellow-breasted Bunting has declined in numbers by 90 per cent and retracted its range by 5,000 km since 1980, a new study shows.

The species was once distributed over vast areas of Europe and Asia, its range stretching from Finland to Japan. New research published in the journal Conservation Biology suggest that unsustainable rates of hunting, principally in China, have contributed to not only a catastrophic loss of numbers, but also in the areas in which it can now be found.

"The magnitude and speed of the decline is unprecedented among birds distributed over such a large area, with the exception of the Passenger Pigeon, which went extinct in 1914 due to industrial-scale hunting", said Dr Johannes Kamp from the University of Münster, the lead author of the paper. "High levels of hunting also appear to be responsible for the declines we are seeing in Yellow-breasted Bunting."

During migration and on the wintering grounds, Yellow-breasted Buntings gather in huge flocks at night-time roosts, making them easy to trap in large numbers. Birds have traditionally been trapped for food at these roosts with nets.

Following initial declines, hunting of the species — known in Chinese as 'the rice bird' — was banned in China in 1997. However, millions of Yellow-breasted Buntings and other songbirds were still being killed for food and sold on the black market as late as 2013. Consumption of the birds has increased as a result of economic growth and prosperity in East Asia, with one estimate from 2001 of one million buntings being consumed in China's Guangdong province alone.

The species has now all but disappeared from Eastern Europe, European Russia, large parts of Western and Central Siberia, and Japan. 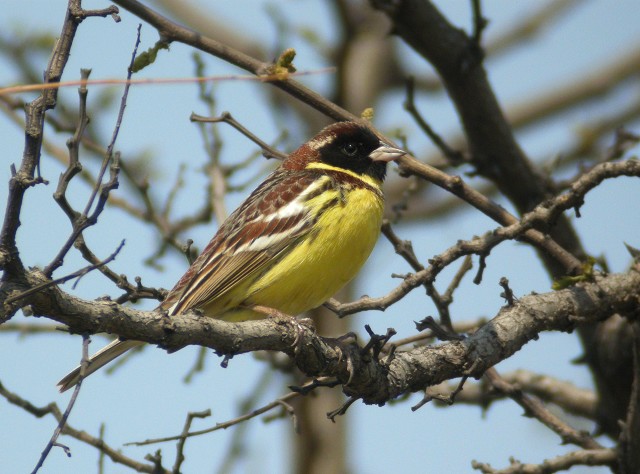 In reflection of its catastrophic population decline, the British status of Yellow-breasted Bunting has reduced from regular autumn visitor to extremely rare vagrant in the space of just 20 years (Photo: Mike Parker)

"To reverse these declines we need to better educate people of the consequences of eating wildlife. We also need a better and more efficient reporting system for law enforcement", said Simba Chan, Senior Conservation Officer at BirdLife International.

"The story of the Yellow-breasted Bunting illustrates how little we know about trends in populations in many species in the region. There is growing evidence that these declines are part of wider problems for common Asian birds. We need to better understand these in order to address them more effectively."

Coordinated monitoring activities are urgently needed in East Asia. However, a new agreement between China, Japan, Republic of Korea and Russia is a first step in developing a coordinated monitoring of migratory birds across the region. The situation is now so serious that the Convention on Migratory Species has agreed to develop an international action plan for the recovery of the Yellow-breasted Bunting throughout its range by 2017.

"In the last decade birdwatching has become increasingly popular in China. Birdwatchers will play an important role in future data gathering", said Simba Chan. "Now is the time to address these worrying declines across the region by mobilising people for conservation action."